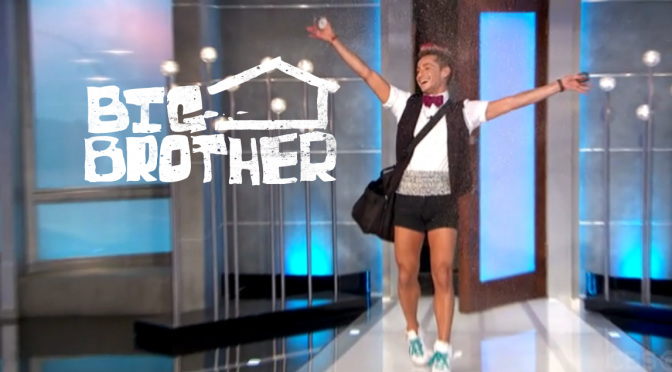 Frankie has been a longtime threat to win it all, but the option to take him out arrived and the Hitmen (read: Derrick) made sure that his eviction was signed, sealed and delivered. Â I’ve had my issues with Frankie over the course of the game, happily reveling in his almost-eviction at Nicole’s hand when Caleb sat out the BotB, yet grew to respect his beastmode and shrewd gameplay. Â He’s certainly the Janelle of this season.

I’m bummed we won’t get to see a truly deserving Final 2 of Derrick and Frankie. Â That would really make it hard for the jury as both of them are deserving of the win. Â Derrick should win for his master puppeteering of the summer while Frankie not only was a brilliant social player but dominated competitions. Â Alas, we’re left with the Coronation of Derrick, which isn’t a bad thing, but really, it’s now inevitable. 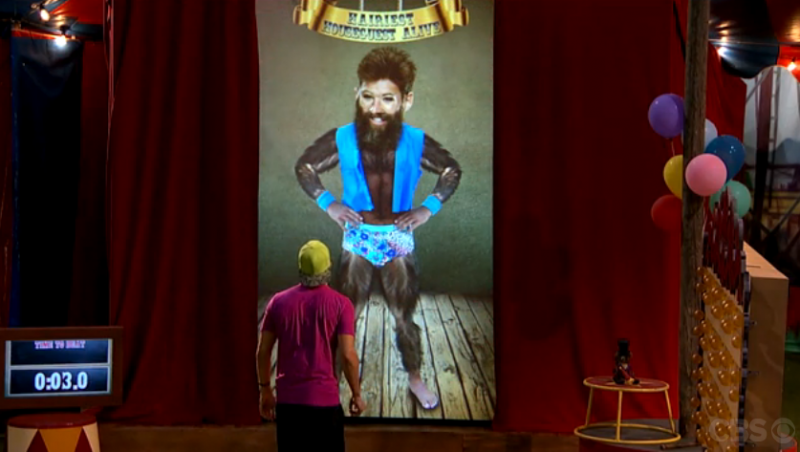 The writing was on the wall when Frankie got nominated. Â We knew it, he knew it. Â Caleb was unable to lie to Frankie’s face about why he got put up, but it’s not as if it really mattered. Â Frankie had to win Veto to save himself. Â He could appeal all he wanted to honoring the agreement, but yeah, this game comes down to greed. Â Guess who wants it more than you, Frankie? Â Derrick. Â And his plan to get out his biggest competition was not about to get set aside for “honor.” Â  Â 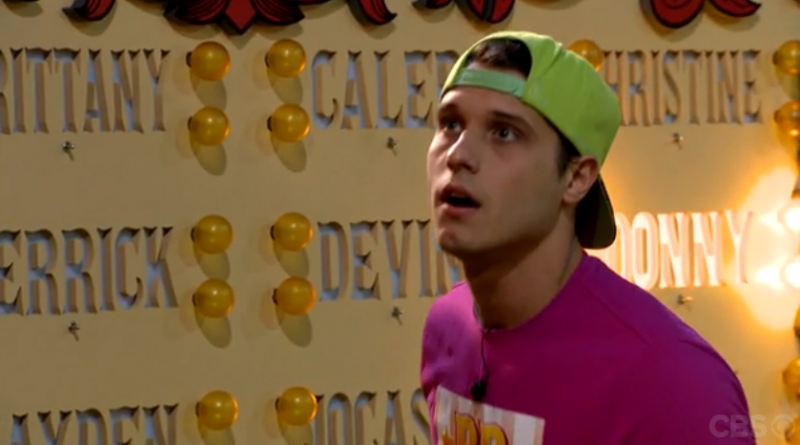 So massive congratulations to Cody, who really smoked the competition in this re-do of the Veto Competition, Freakshow. Â You even beat out Derrick, while unfortunately Frankie choked big-time on the 2nd picture.

There was a lot of episode devoted to showing Frankie doing his best to convince Derrick & Cody that if they kept their word about the boys alliance and got rid of Victoria, he’d certainly target Caleb over them. Â  But it was clear, no one was biting. Â Frankie’s game was over. Â But guess what? 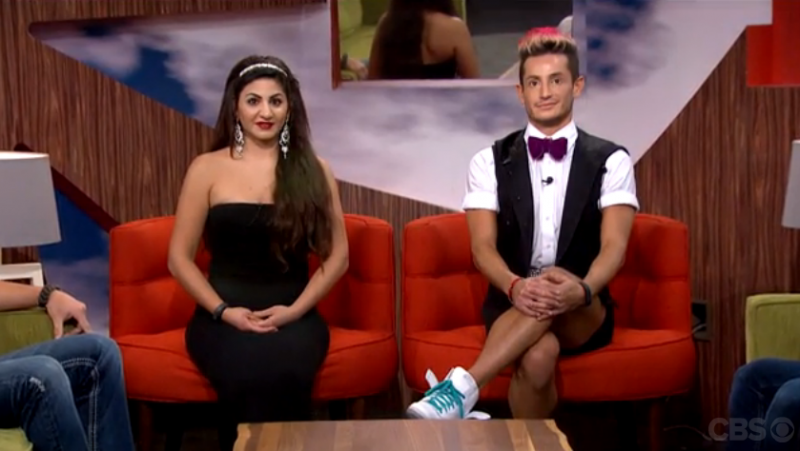 Frankie exited the game with as much positivity and humor as I think I’ve ever seen. Â He gave one last-ditch speech to appeal to the guys’ honor (why not, right?) and ended it with an awesome, “Take it Away, Julie!” before the voting occurred. Â It’s great to see how much more alive even Julie is when she gets to talk with an animated and interesting houseguest.

After getting word of his eviction, he even had a great receiving(farewell?) line, giving Caleb his pawn back, pleading for Victoria to win something, hoping Derrick will keep his fish alive, and telling Cody he’s had better. Â Loved it. 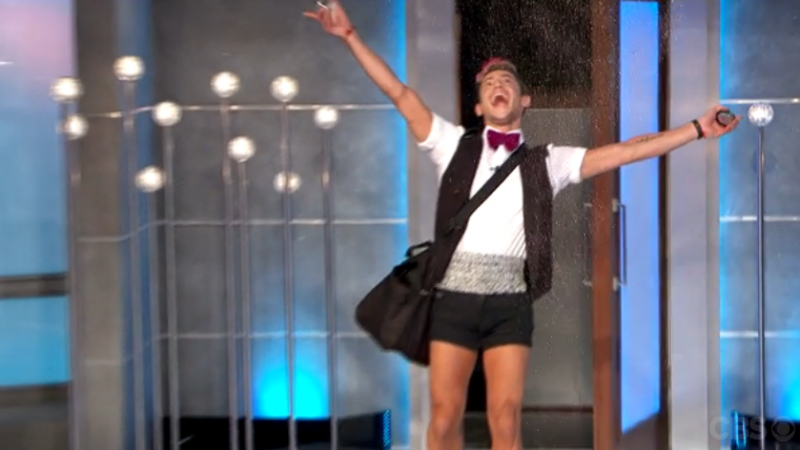 The best partÂ wasÂ his emergence into the studio though. Â Amazing entrance. Â He had the entire audience entertained and his sit-down with Julie was great. Â He knew he made himself a target with his winning streak last week but it was unavoidable as he competes to win. Â Still doesn’t regret pushing the BBRewind button even though 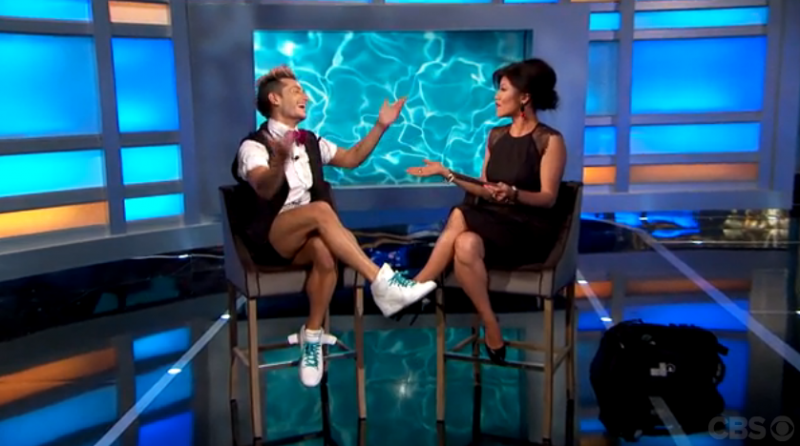 it led directly to his eviction. Recognizes Derrick’s great gameplay and still respects him. Â Also knows that revealing his Ariana Grande connection saved his game and was deployed at exactly the right time. Â  So off he goes to the jury house, happy and excited to see Zach. 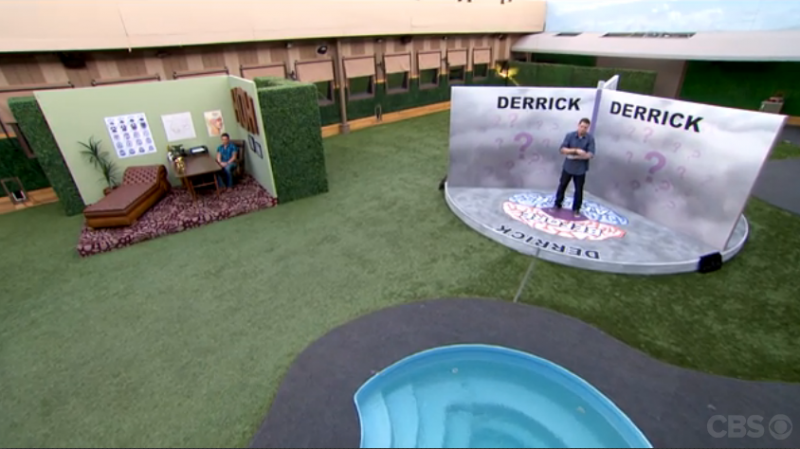 As if it mattered who Â actually won HoH this week, but we still have to go through with it. Â Derrick was safe regardless of who won HoH. Â Caleb still thinks…something, but it wouldn’t have involved turning on Derrick. Â Cody, of course, isn’t doing anything without getting “say so” from Derrick. Â And Victoria? Â Well, c’mon. 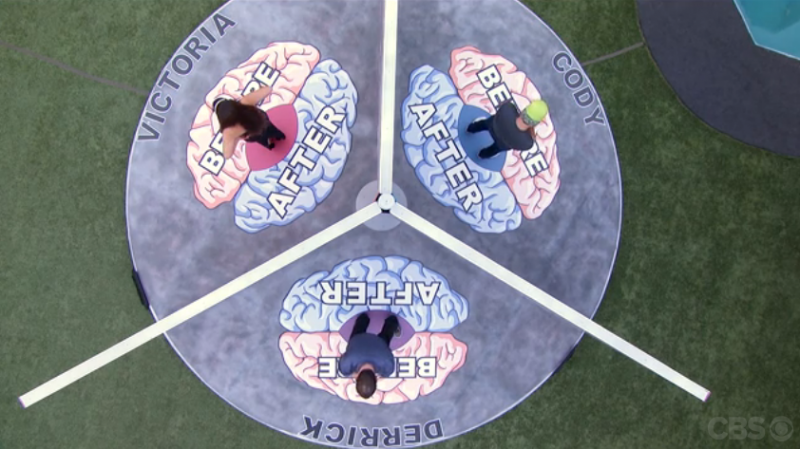 But I have to admit I was shocked that Victoria was momentarily tied for the lead in this competition and Derrick dropped into third place! Â But the universe righted itself and Victoria quickly fell behind while Cody and Derrick ended up tied after 7 rounds. Â Cody had a brief hope for winning but you’re going against the master. Â 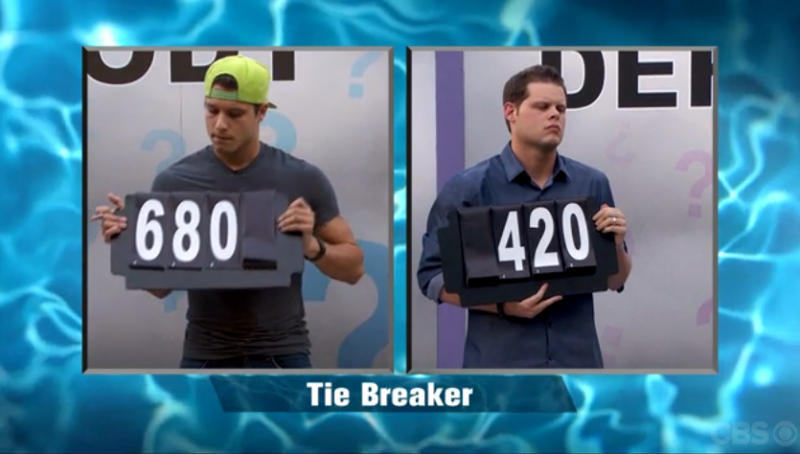 So the tiebreaker played out and Derrick won it by being under the value while Cody went over, and Derrick guarantees himself a place in the final 3! Â Props to Cody though: he was working the shit out of that t-shirt. Â He’s been working out like a fiend and it fucking shows. Â Shazam. 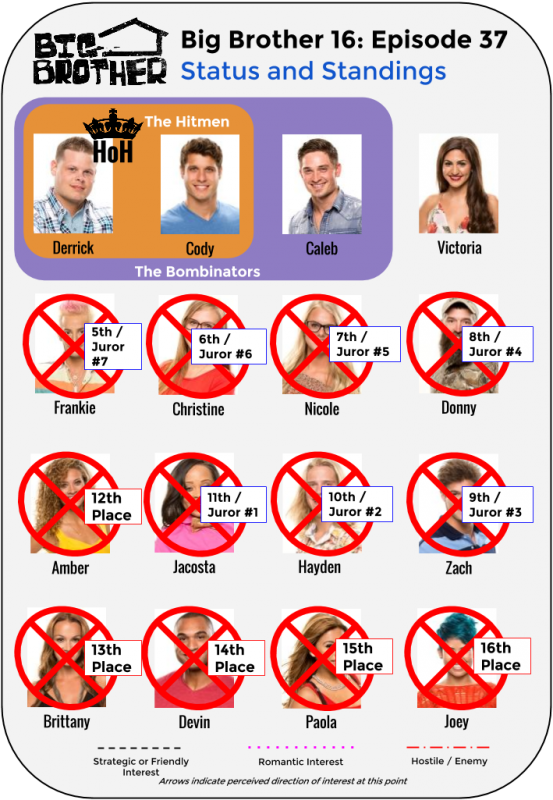 We’re down to the last 4, and it seems that with Derrick in charge, this next eviction is fairly straightforward: Â Caleb. Â There’s NO EFFING WAY that Victoria is leaving. Â As I wrote in the last post, Frankie was definitely going out now, with Caleb quickly following him. Â Derrick doesn’t have to worry about winning against either Cody or Victoria, but could just maybe have to work harder at beating Caleb. Â Not that there would be anything in a Caleb-Derrick Final 2 that would resemble a Frankie-Derrick Final 2, but I could see some jurors resenting Derrick’s hand in their eviction and respecting Caleb’s physical feats. Â I’ll go into that kind of analysis once we’re down to three houseguests though and Caleb has left the house stunned and talks to Julie about how he’s been betrayed blah blah blah “heard dat” and more. Â It’ll be great.