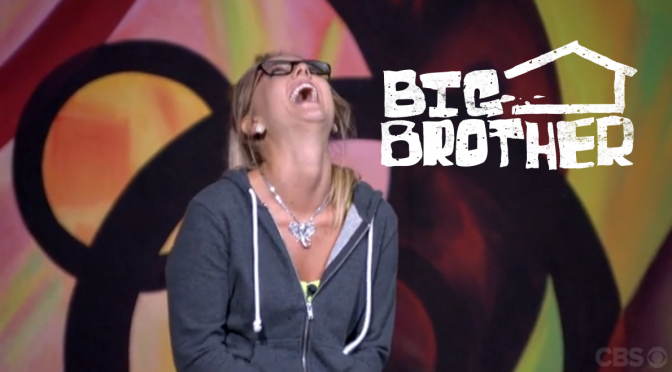 If I had written an episode to follow the bloodbath that was Episode 20, it would have been written exactly like this episode!  The Frankie-thing at the Battle of the Block is not something I would have written though, but only because it would have been far too unbelievable.  Seriously, WTF?  How the hell did he handily beat Zach and Donny like that?????  I get ahead of myself, as usual.  I was just so relieved that it wasn’t the Torture-of-Nicole Hour I had completely expected.  It certainly started that way! 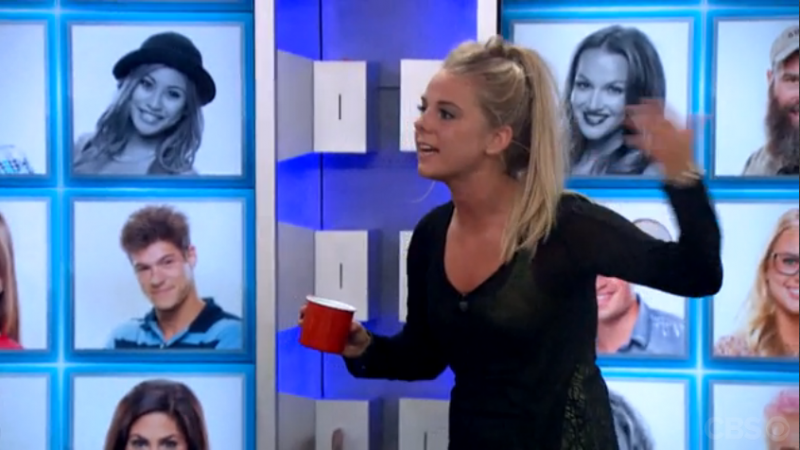 Nicole was pissed.  Rightfully so, I would add.  After briefly getting out some tears, it was time to go on the offense, and boy did she!  She confronts everyone about all the plans and alliances that had been proposed with her, and of course everyone denies those ever happening. 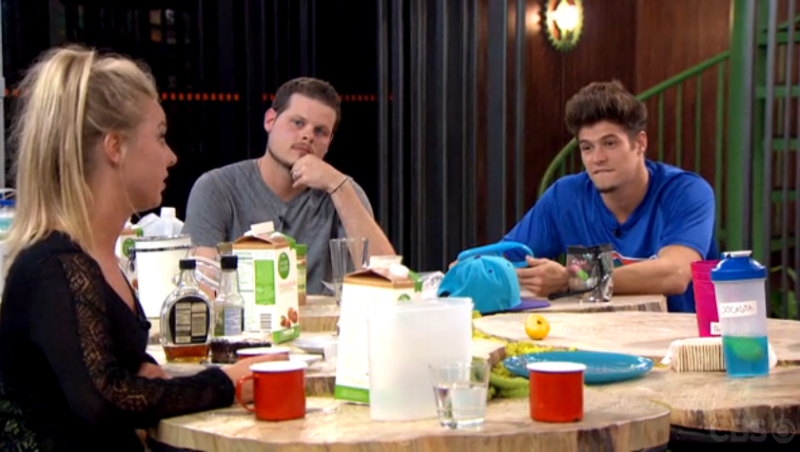 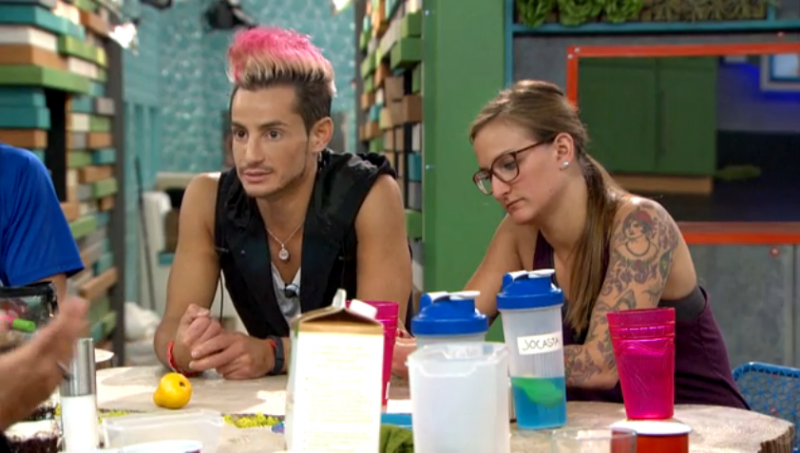 Zach and Frankie are notable dicks about it, while Caleb is pretty cold.  Derrick blames his change of heart on something he heard from Victoria, and MAN, Derrick is playing this game so smoothly.  Just give him the money! 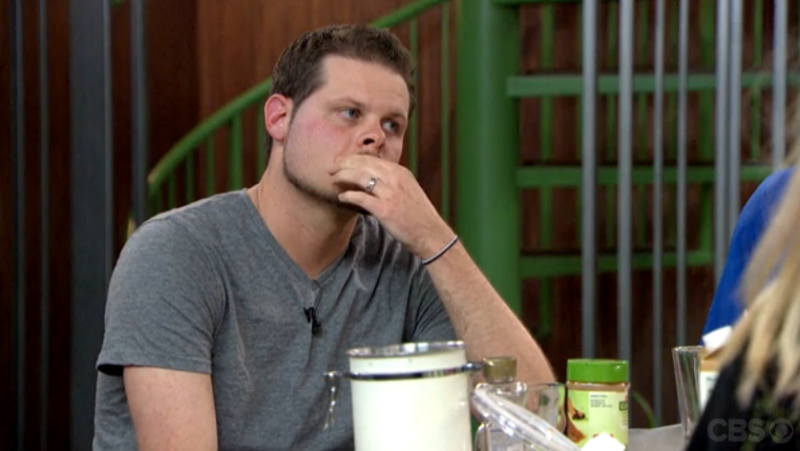 Everyone basically mocks Nicole’s existence in the game and the fact she’s alone, and I was just ready to turn the damn show off.  After Thursday’s ridiculousness, I was thisclose to just saying, “eh, I’m over it.” 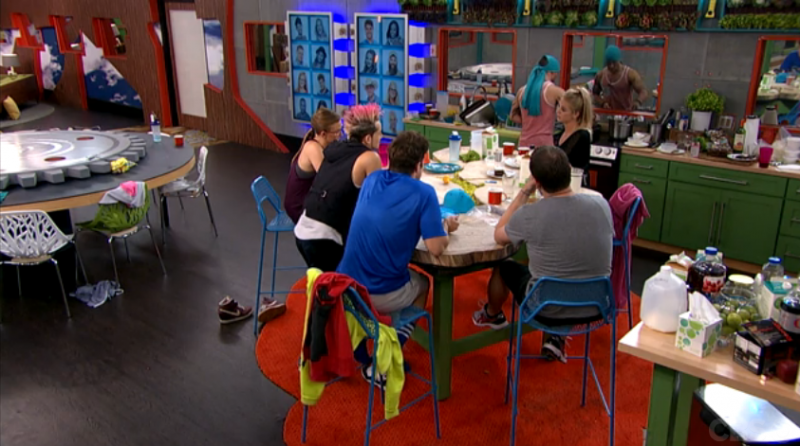 This episode almost affirmed that decision, although when Nicole tells us that she is not going to back down from the house nonsense, I was intrigued.  Sure enough, she kept letting them all have it, and by doing so, especially with true tales, people started believing her!

The HoH Competition That Changed Everything 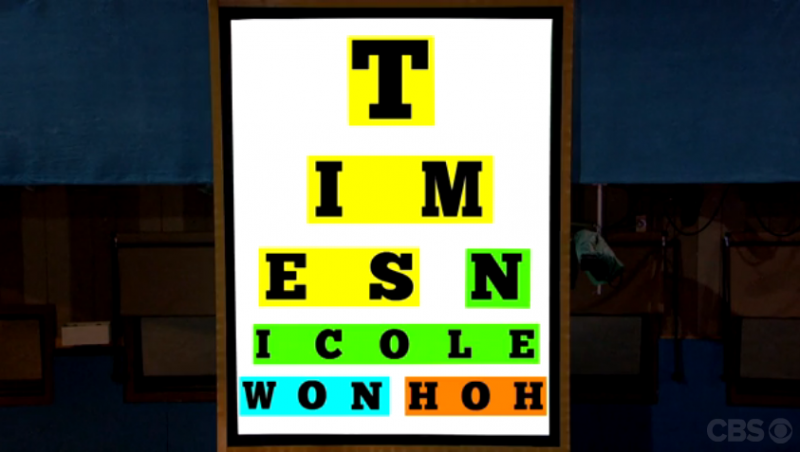 That HoH competition managed to be exactly what Nicole needed, as did the show.  In a bracketed-by-random-draw competition, the semi-finalists were Nicole against Victoria (who had beat both Derrick and Cody!) and Christine against Zach (who had beat Frankie because he randomly guessed correctly). 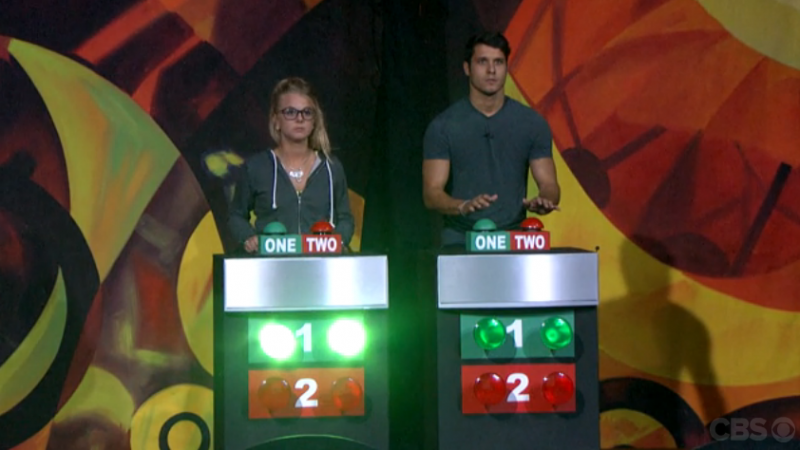 In the end, Nicole took Victoria out, as if that was a surprise, and yet again, Zach guessed an answer before reading the question, but got it wrong, handing Christine the win. 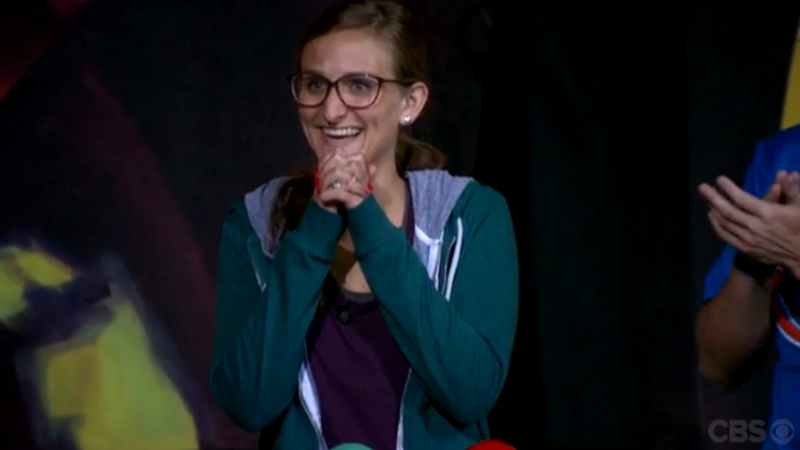 So yeah, the ostracized Nicole was just given a loaded bazooka and no one could do anything about it.  It was fucking awesome.  And oh yes, she wanted some payback.

Derrick comments that Nicole and Christine being HoHs isn’t the best case scenario, but it’s certainly not the worst.  He’s right, but only about his situation, as Nicole foolishly and explicitly trusts him!  Everyone else though?  LOOK THE FUCK OUT.  And oh man, it was crazy watching the scheming going on. 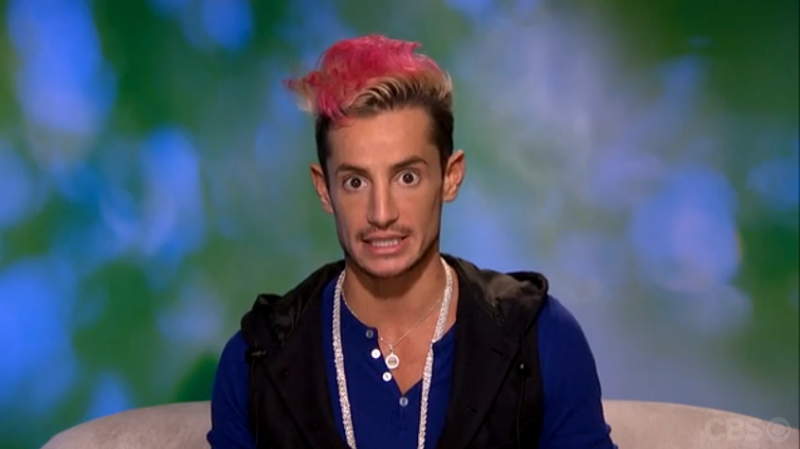 First, Frankie manages to be the one to set up a Bus for the other Detonators to get run over by suggesting them as targets to Nicole.  He also confusingly points out to her that he’s already on the outs…which confused me as I almost thought he was lying to fool her as it didn’t seem that was the case, at that point in time at least. 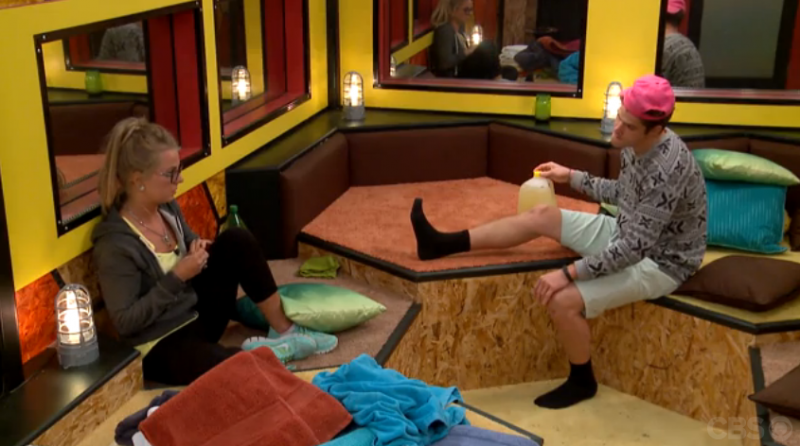 This information he provides of course gets back to the others, namely via Zach, who strategizes with Nicole in the hopes that he could try to save himself from the block.  In the course of this conversation, he spills the beans to her about EVERYTHING, including the Detonators alliance.  She’s amused by Derrick and Cody being part of that as she fondly remembers The Rationale before that blew up in her face. 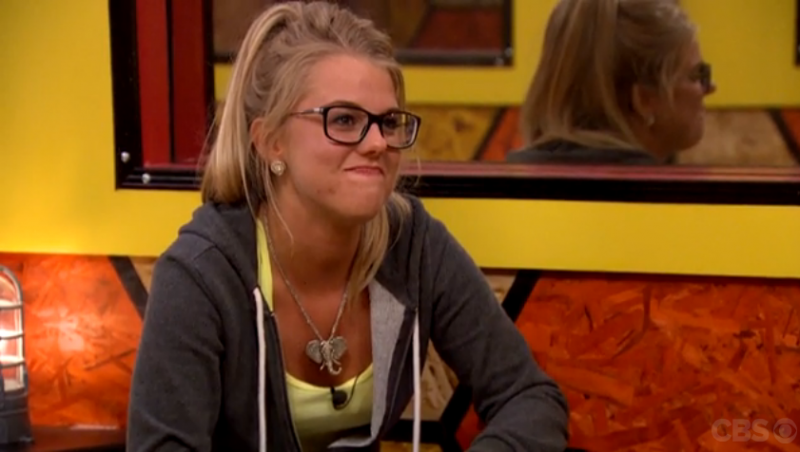 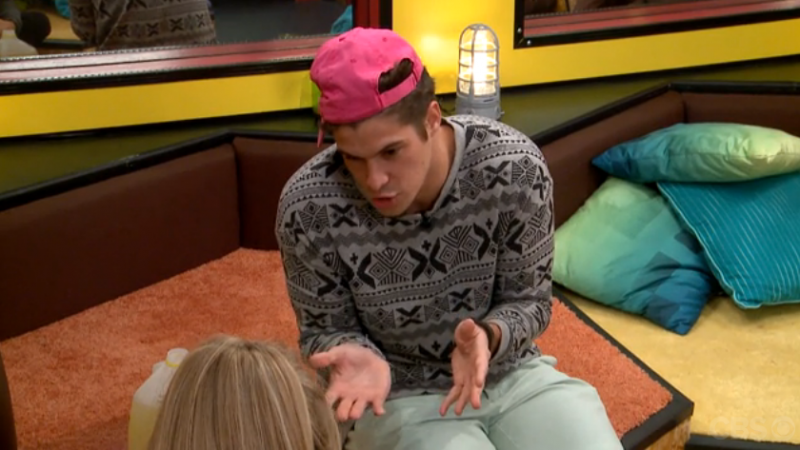 Surprisingly for both of them, they realize they can use each other to move forward, but obviously, Nicole doesn’t trust Zach in the slightest.  Doesn’t mean the information revealed isn’t powerful though!

Frankie the Target, Yet Again 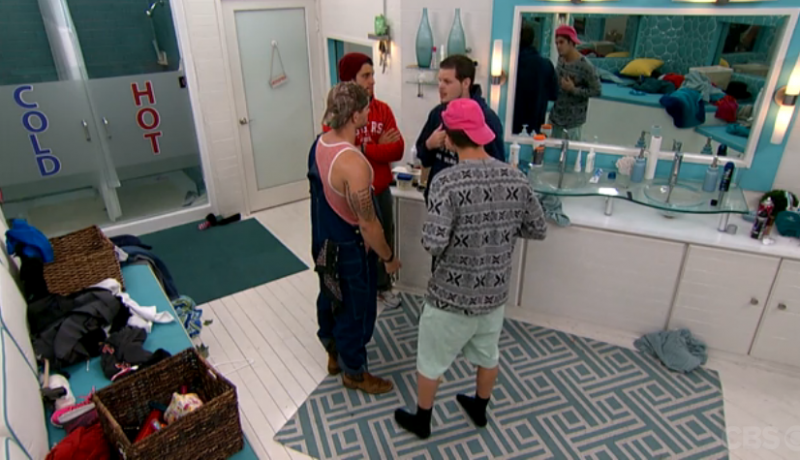 So yet again, Frankie becomes the target, but this time he’s being targeted by the Alpha Males.  They know it won’t take much convincing to get Nicole to nominate Frankie, but they want to ensure that he’s nominated with someone who will throw the Battle of the Block and ensure he stays on the block and gets evicted.  Zach happily volunteers, which satisfies them. 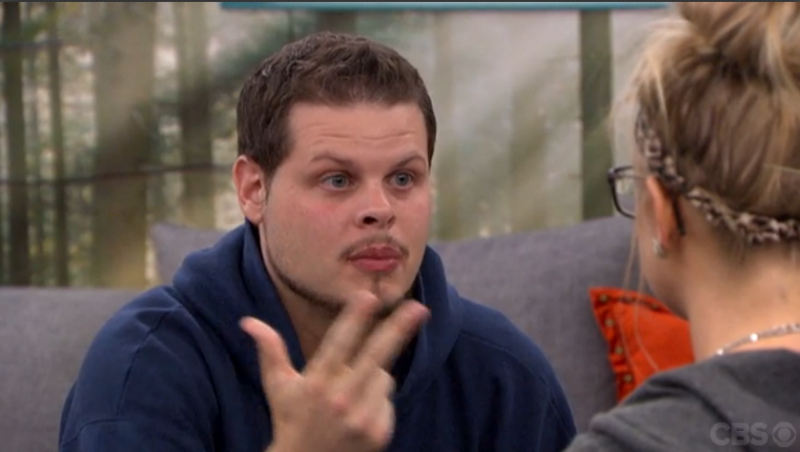 But when Derrick sells the idea to Nicole, she doesn’t believe Zach will go through with it.  Caleb comes in and guarantees her that the plan is legit, and will step in instead to seal the deal if she’d feel better about it.  She does….and is almost certainly sealing Frankie’s fate! 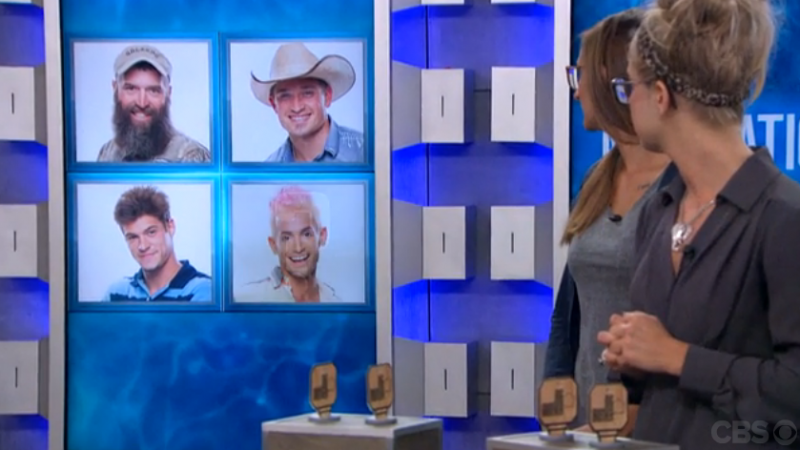 The first time it’s been all guys who have been nominated!  Donny, poor Donny, isn’t surprised at all that yet again he’s nominated, but actually hopeful because he’s paired with Zach.  Christine’s pitch is pretty good too, and seems fairly inoffensive.  Nicole’s nominations are where it becomes interesting, as Frankie seems a bit taken aback.  She’s not coy about why she nominated him either, which is great.  Own that shit, Nicole! 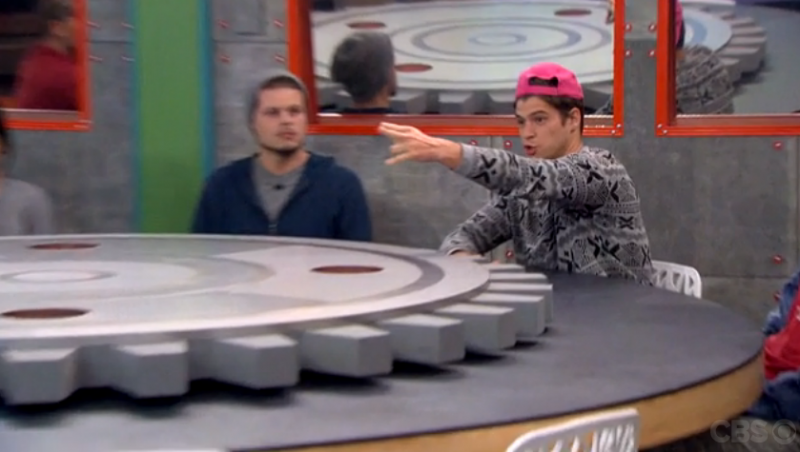 The surprise is at the conclusion of the ceremony, when Zach tells both Christine and Frankie they’re fucking liars and he’s fucking done with them!  At this point, I was convinced this was all a big play to sucker Nicole, but then I realized there’d be no point in doing that and none of these people are that good of actors.

If this is real, I’m surprised.  Frankie can’t believe Zach is actually refusing to speak to him.  When Zach keeps refusing to engage with him, Frankie finally lets him have it a bit and reminds him that without Frankie’s help, Zach would’ve been gone a long time ago and should remember that.  We all know Zach is insane though and doesn’t give a shit.

A Stunning Battle of the Block, Week 7 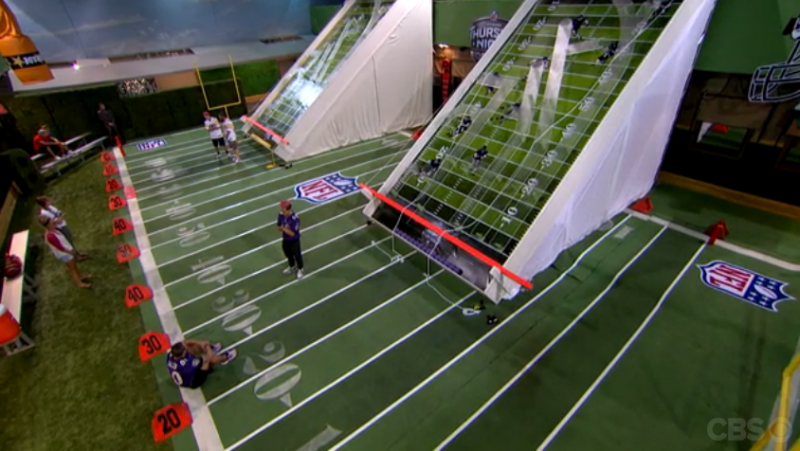 CBS has some internal promoting to do, what with Thursday Night Football coming out, so why not have a football-themed challenge!?  It was pretty awesome of a setup and promised to be an interesting competition, except of course for the fact that Caleb was going to throw the competition.  What happened though was just surreal: 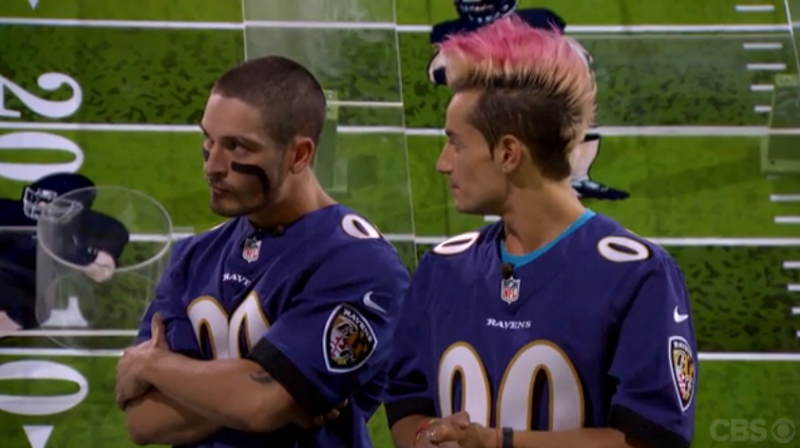 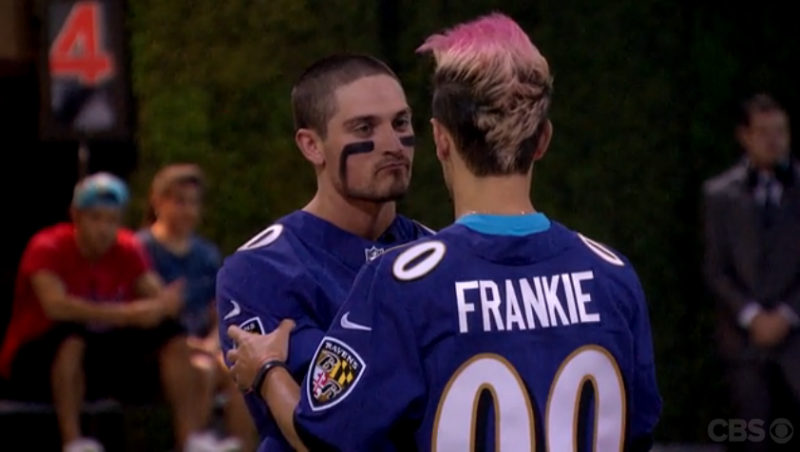 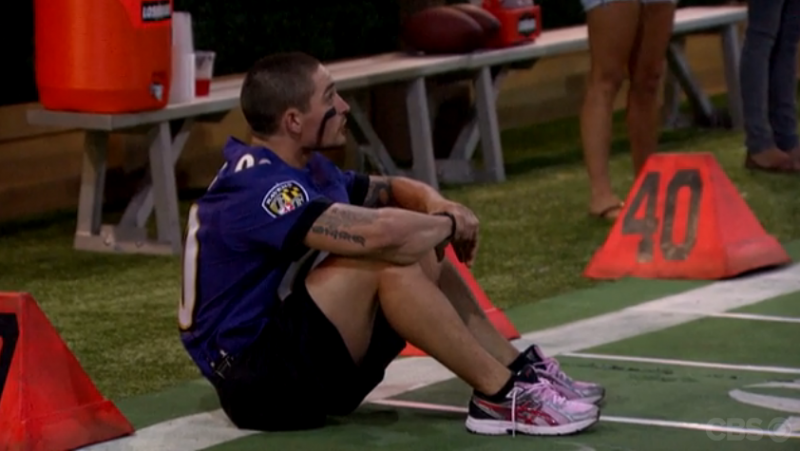 Before the competition starts, Frankie notices that Caleb can’t even look at him.  He immediately knows what’s about to happen and begs Caleb to stop it.  Caleb finally can look at him in the eye and tells him he’s absolutely refusing to compete because Frankie is a sneak and a liar and is responsible for Amber’s eviction. WOW.  He literally sits down on the sidelines and leaves Frankie to his own devices.  We’re all primed for a clusterfuck for the ages at this point, as it definitely looks like a challenge that REQUIRES 2 people. 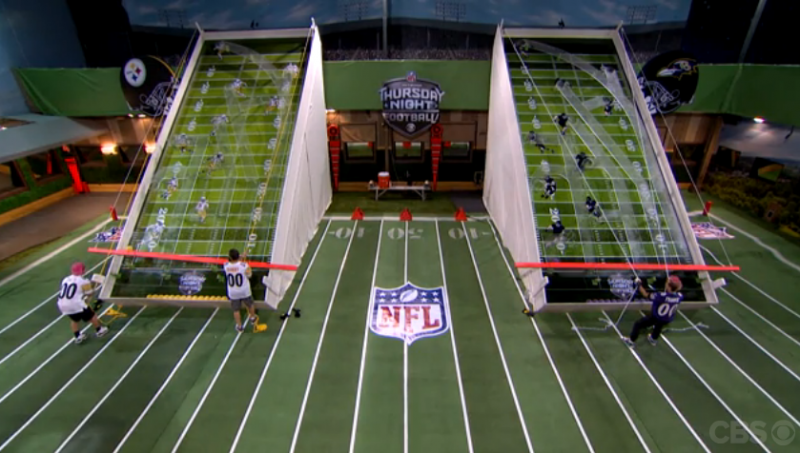 So when the competition starts we see Frankie having lots of trouble getting the hang of things while Donny and Zach starts to get the hang of it and take an early lead.  BUT THEN, Frankie gets the hang of shit. 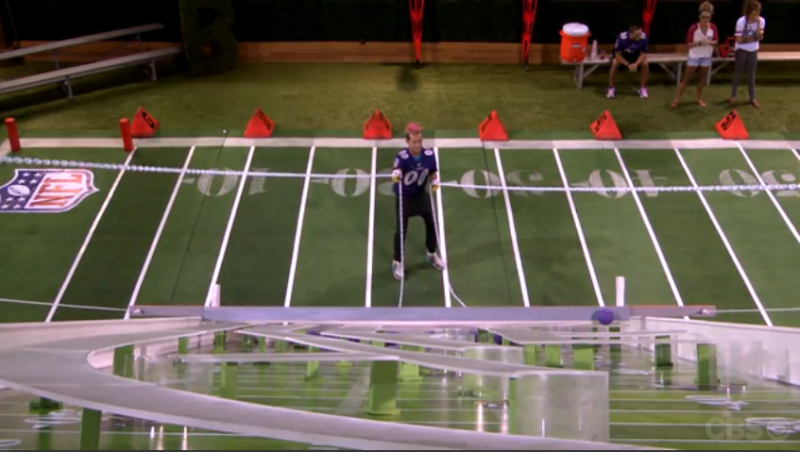 And holy crap, Frankie starts to fucking do this.  Sure enough, he catches up to Zach and Donny, then surpasses them.  It truly becomes a competition – and you realize that if you can work solo, you don’t have to worry about communication with a teammate and that person fucking up. 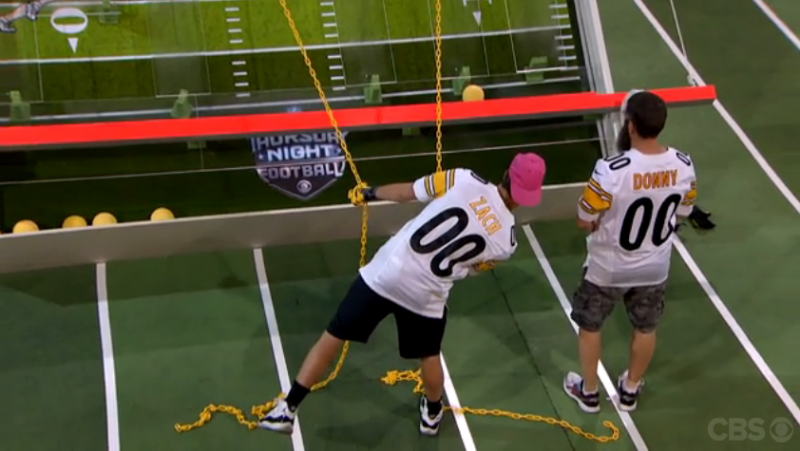 Sure enough, working solo is to his advantage, and it gets to the point where the two sides are both tied at 9/10 goals achieved, with both having to transport the ball all the way to the very top.  By this point, it isn’t a surprise that Frankie fucking wins! 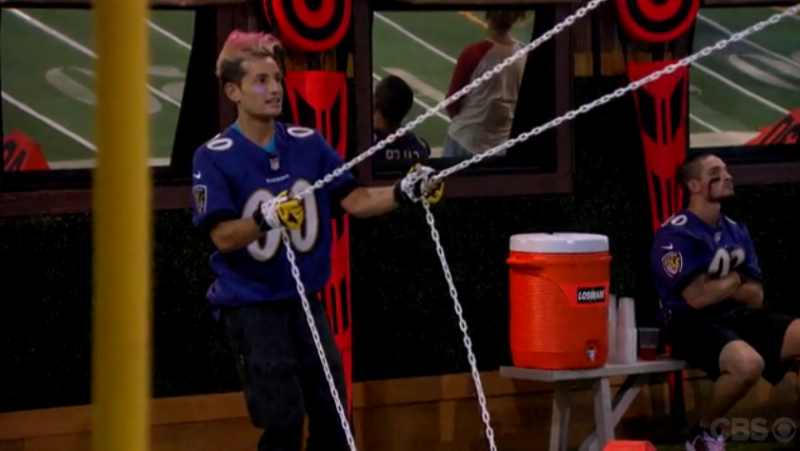 It’s pretty amazing that Frankie saved himself in spite of Caleb sitting things out.  Without Caleb in the way, it was actually better for Frankie – I think Caleb actually should have played and kept sabotaging the efforts to ensure Frankie wouldn’t win, but 20/20 hindsight. 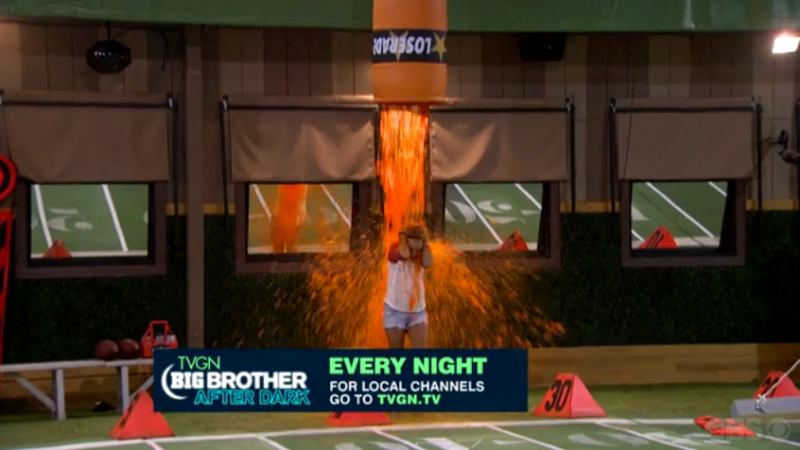 So with Frankie winning, that deposes Nicole as HoH!

I’m not really sure what this means for Nicole.  It seems she’s effectively done enough damage to the Detonators alliance that it’s unlikely to boomerang around and re-focus on her, BUT it wouldn’t be unheard of.  Now that Frankie’s safe, as is Christine, if Zach or Donny can win Veto, Nicole is free to be put up.  The rest of this week could be verrrrry interesting. 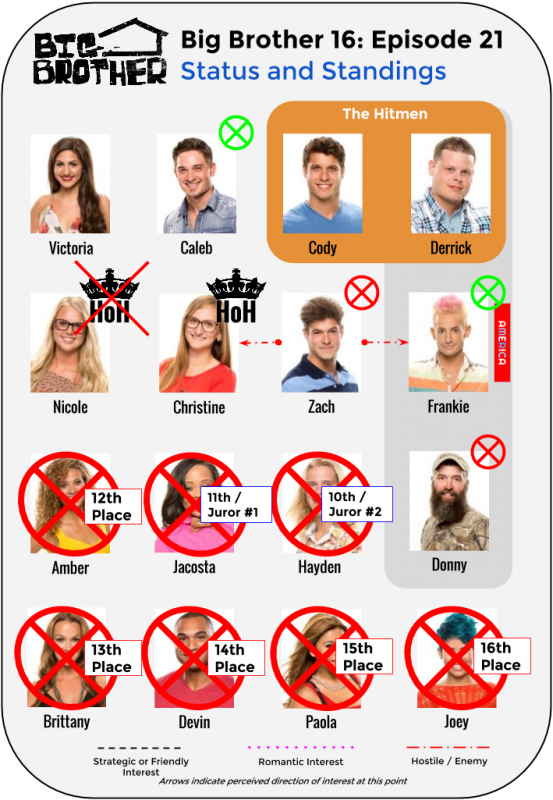 Wow, after this episode, a lot had to get updated.  I first removed The Detonators as an alliance as I’m pretty sure that’s over, at least in its current format.  Also, some long-existing relationship lines had to be broken, mainly Zankie. I put in some hostile lines between Zach and both Christine and Frankie as it seems he really means to be done with them. We’ll see, though.    This was a crazypants episode through and through and exactly what I was hoping would happen, despite being sure that in fact it would be the Torture Nicole Comedy Hour. Yay for Miracles!