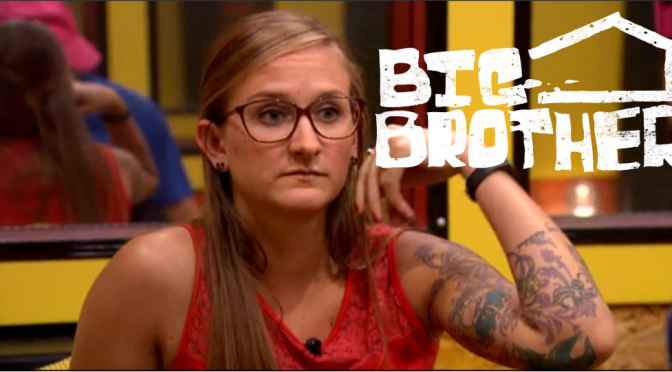 So, a LOT of shit happened this episode, didn’t it?  I felt like I was writing a novel’s worth of notes as so much plot has gone on with Zach in power.  Where the heck do we even start?  I guess, let’s do a VERY QUICK recap of the past two episodes: 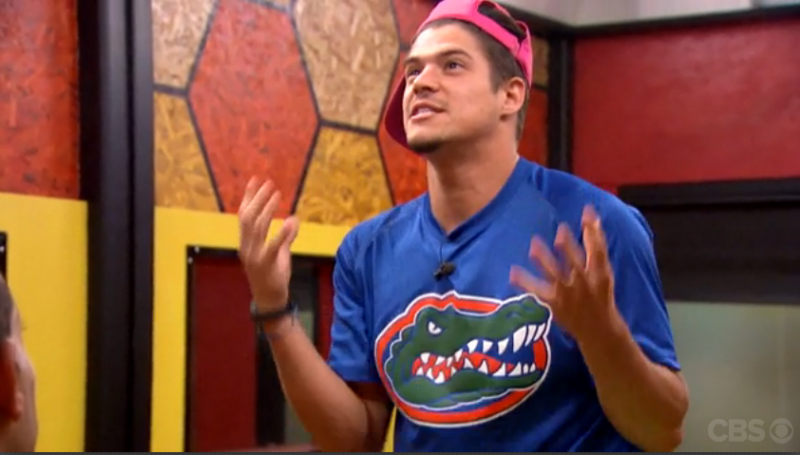 Everyone was worried that Zach would be a problem with him having HoH powers, and true to his reputation, he was that and more.   Let’s dive into this some more. 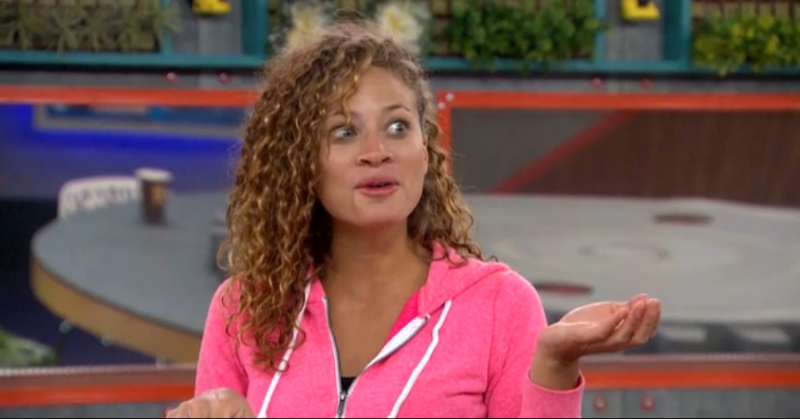 First, Zach knew immediately who his target this week was:  Amber.  Turns out Christine couldn’t wait to report back to the Detonators about Amber’s ovation to her about working together and getting rid of Zach.  Sneaky, sneaky, Christine.  I’d say watch out, but it’s too late, as this multi-alliance sneakiness IS backfiring on you.  So with Amber’s completely understandable gameplay exposed to Zach, he wants to be covered in blood. 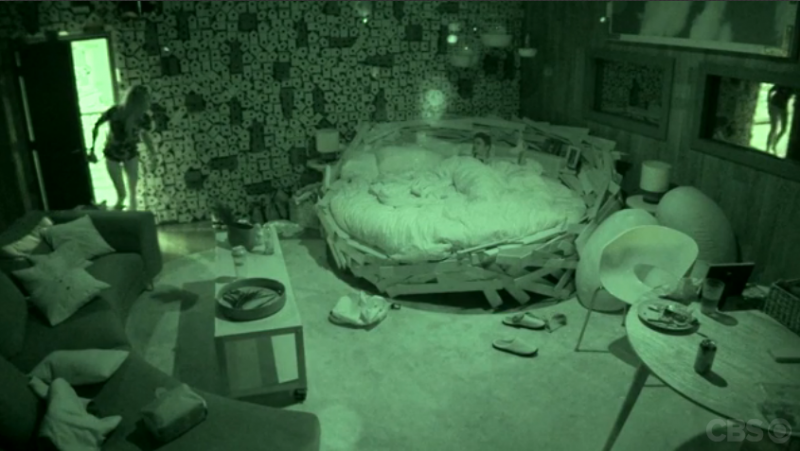 The thing is, he doesn’t want her to have a chance of escaping, so the plan is to backdoor her.  Zach even goes so far as to assure Amber that she’s safe and that they’re all good after she makes an overture, but Plan A is still to backdoor. 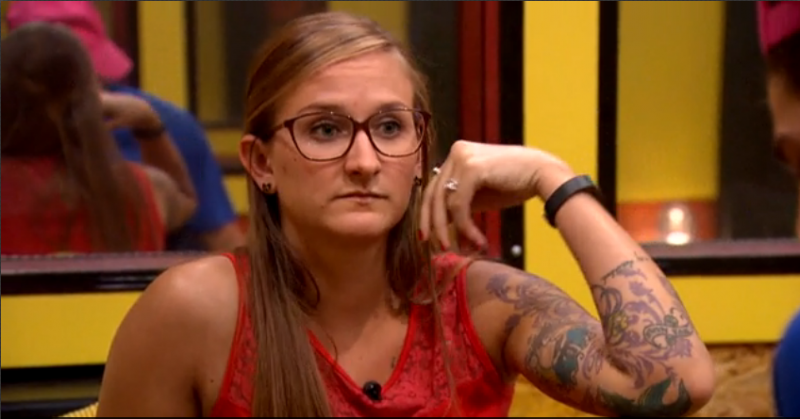 Next, Zach’s master plan is that he needed a Detonator to go up as a nominee along with Amber so that the Battle of the Block could be thrown.  The only nominee that made sense to him was of course, Christine.  Guess what? She wasn’t a fan of being Zach’s pawn.   Guess guess what then?  Zach wasn’t a fan of being questioned by some useless girl!  So now Christine was a focus of his ire.  Cody tried to reason to Zach later that it made no sense to tear at the Detonators’ seams ALREADY when they’d JUST formed an alliance, but that sense of reason fell on deaf ears. 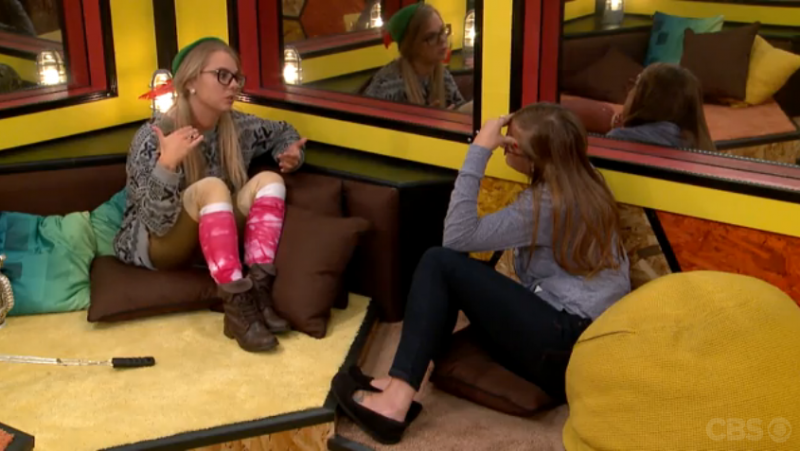 Step Letter C in Zach’s plan?  Fuck with Christine’s game by toying with her close friend, Nicole.  He played with Nicole by teasing that he could tell her sooooo much about what’s really happening, and that Christine isn’t telling her everything.  Nicole is rightly skeptical and talks to Christine about it, and while Nicole is blissfully naive about the whole situation, Christine’s rage-levels nearly explodes the scale as she realizes what Zach is close to doing.

So that sets the stage for what transpires in the remainder of the episode, as it is clearly a volatile stage and any little thing can send it over…. 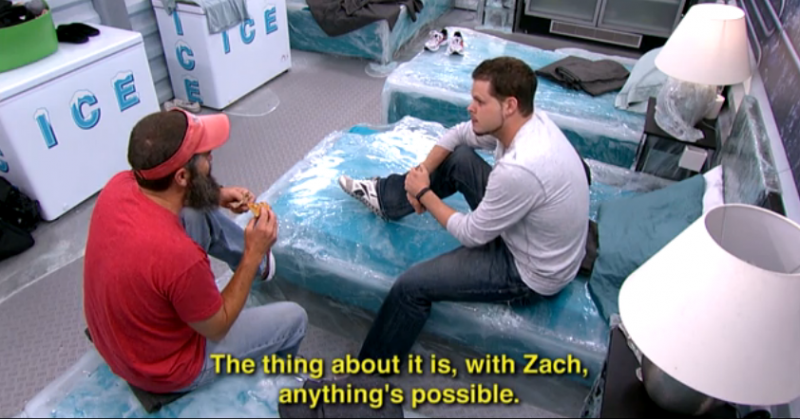 Team America was tasked with the challenge of creating a heated argument lasting at least 20 seconds at either the Nominations Ceremony or the Power of Veto Ceremony.  As was abundantly made clear by the way Zach had been behaving thus far, this challenge could easily be accomplished using Zach as half of the equation.  Frankie and Derrick were ready to do their part, while Donny just of course is along for the ride here.   But there’s the spark that was needed to really get things going.

That Word You’re Looking For is “Uncomfortable” 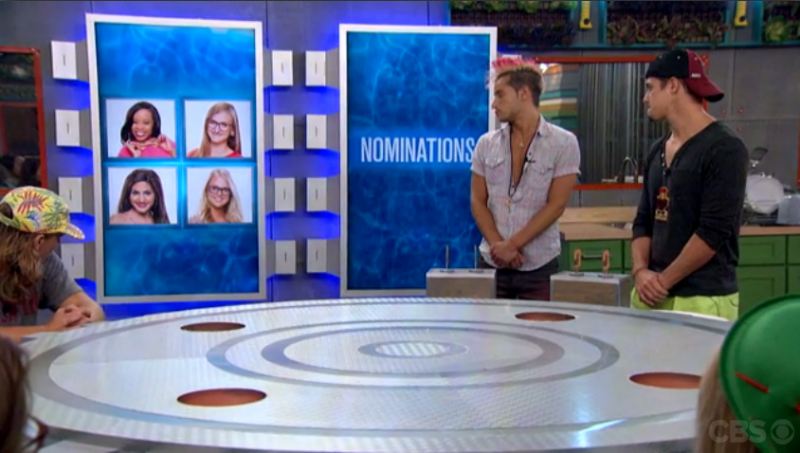 The Nominations Ceremony this week was pretty ridiculous.  Frankie, as always, is playing things very cleverly, and nominates the 2 girls who are ALWAYS nominated, Jacosta and Victoria.  He even admits it’s easy to stay blood-free nominating those 2 as he’s already done so before. 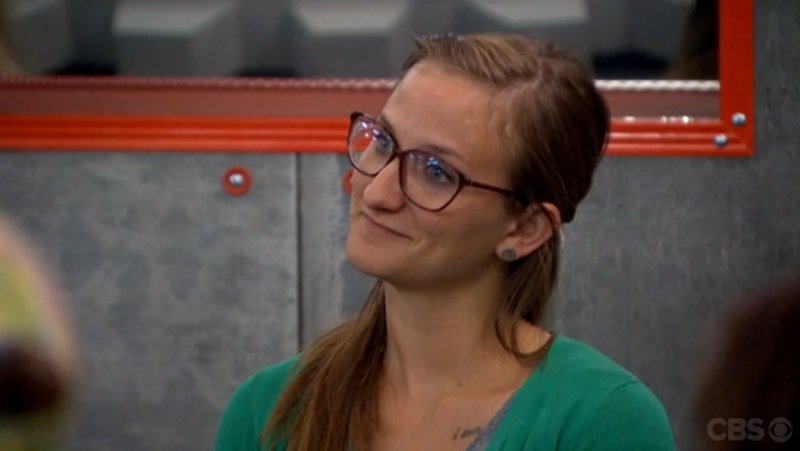 Zach, on the other hand, lets his Asshole Flag fly!  First, we get the explanation for Christine from Zach, which was Derrick’s and Frankie’s attempt to win the Team America challenge.  They goaded him into really going for a brutal takedown about how Christine was a floater, but Christine wasn’t taking the bait.  You COULD see her gears turning though, calculating just how she’d destroy this little prick. 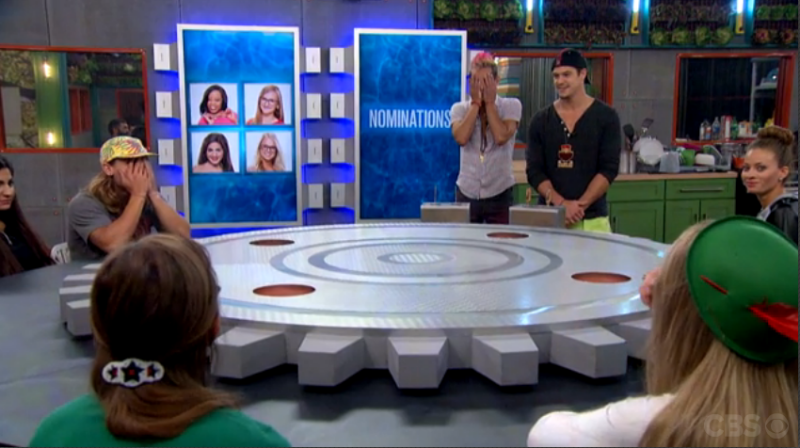 Zach then turned his hostile gaze towards Nicole of all people, to the horror of absolutely everyone in the room.  He could have easily left her alone, but he tears into her for some reason, calling her a “fruit loop dingus” all while having the biggest shit-eating grin. 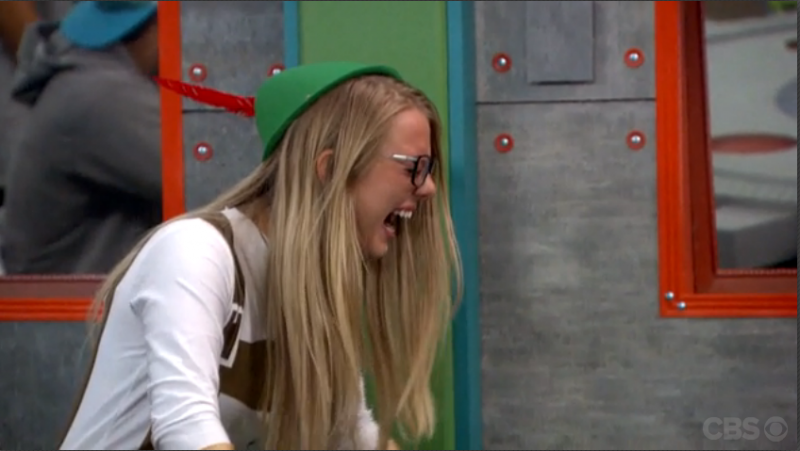 Nicole, to her credit, laughs hysterically at the whole spectacle which you can tell throws Zach off a little.  Nicole is obviously in a state that could be called as precarious, as those huge laughs also look like someone about to cry, which does then happen.  It was all so needless, and I can 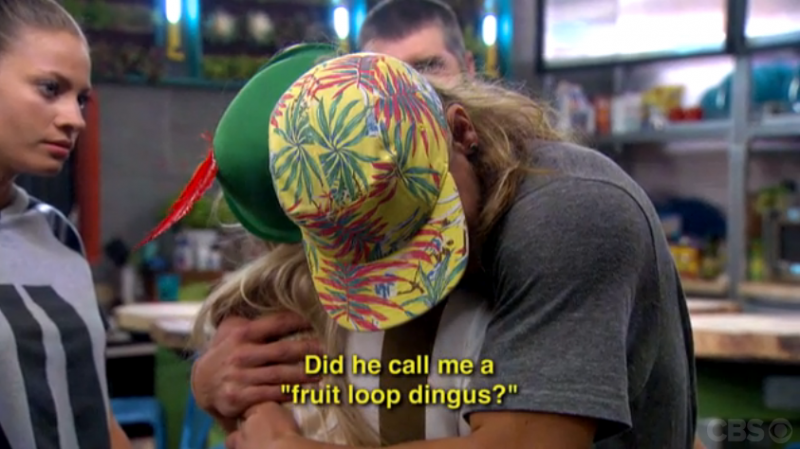 imagine that Hayden was doing his best to stop from knocking Zach out right then and there.  At least, I hope that was Hayden’s mindset as Zach needs a serious “attitude adjustment” after that display.

So yeah, Team America failed but Zach succeeded in becoming a true villain to the rest of the house.

In the aftermath of that little episode, Christine confronts Zach about his actions especially with regards to telling things to Nicole.  He of course denies it but she’s not a fucking moron and tells him that she knows he’s full of shit.

Battle of the Block, Week 5 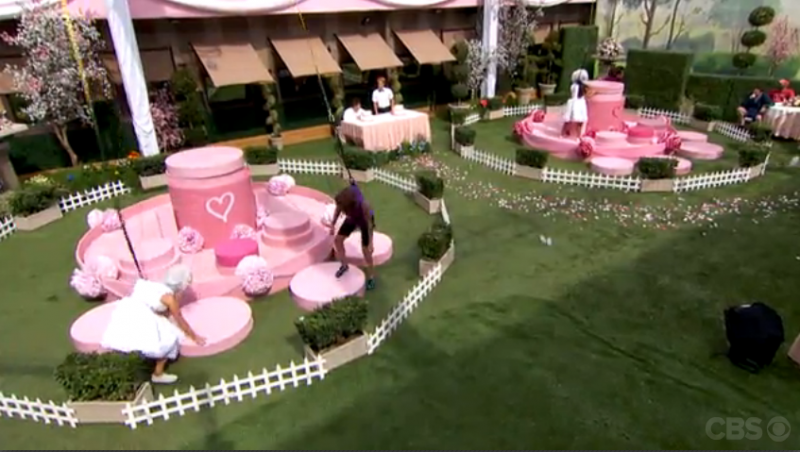 We have ourselves a Wedding Reception as the theme for today’s challenge, which is for each team to build a giant wedding cake that they can climb on top of and stand atop for at least 3 seconds.  Nicole and Christine work together fairly well and really destroy this 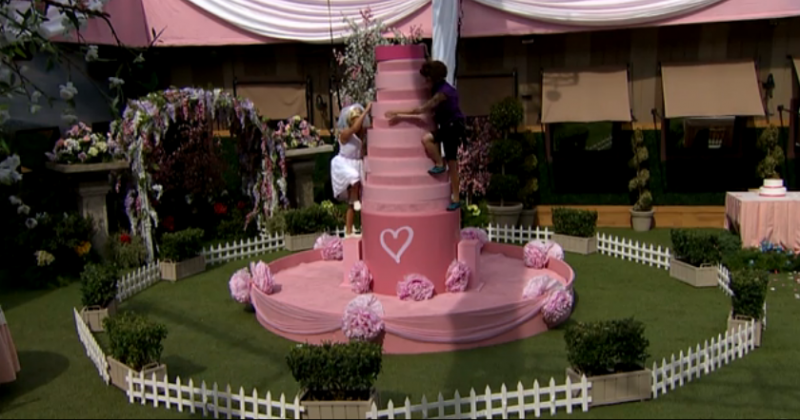 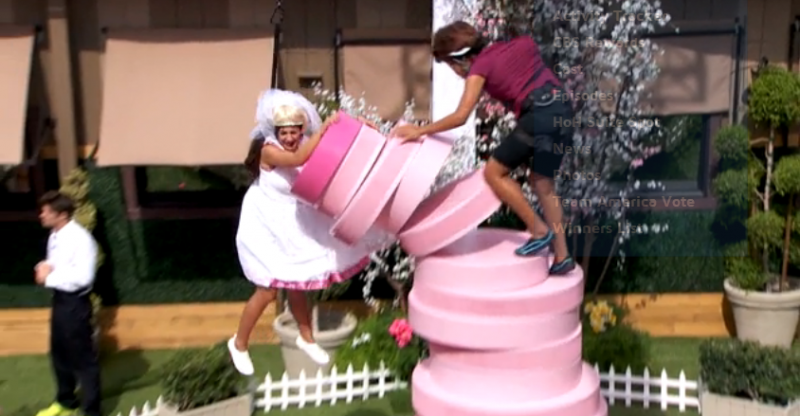 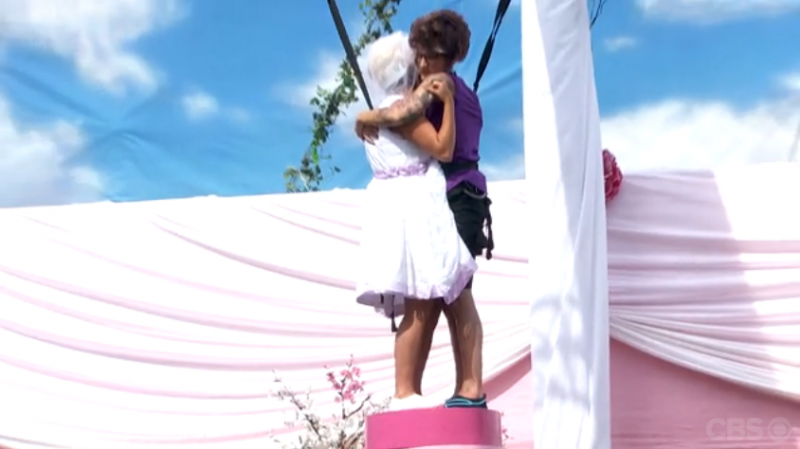 competition, while unfortunately Victoria and Jacosta just don’t work together well.  What I appreciated from this debacle was that Jacosta started to show some of the personality I imagine CBS was 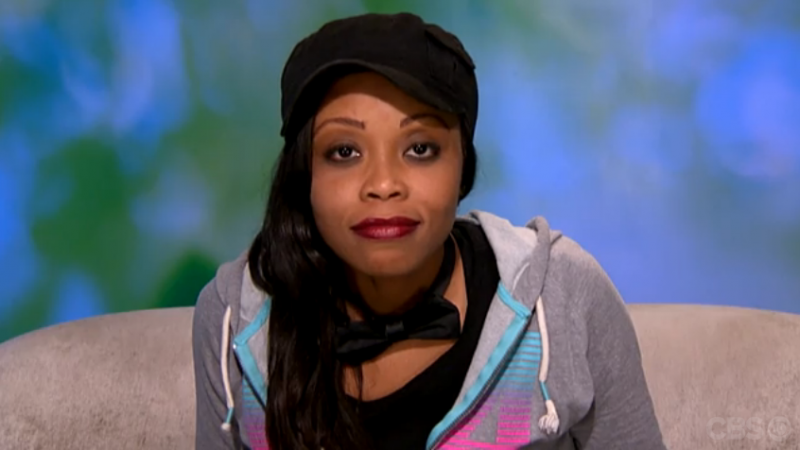 hoping would emerge as she was actually really funny this episode, especially talking about Victoria.

With Nicole and Christine successful at Battle of the Block, Zach just lost his power and is very eligible for being put up as a replacement nominee.  Now that Frankie is the sole HoH, even he knows that it doesn’t have to be Amber this week at all, as if the house is screaming for Zach’s head, he has no problem delivering it.  I think Frankie HAS to make that move and make it soon, as you don’t want Zach anywhere NEAR a jury.   His vote alone is unpredictable but letting him mess with the jury’s minds is a suicide move.  Get rid of him! 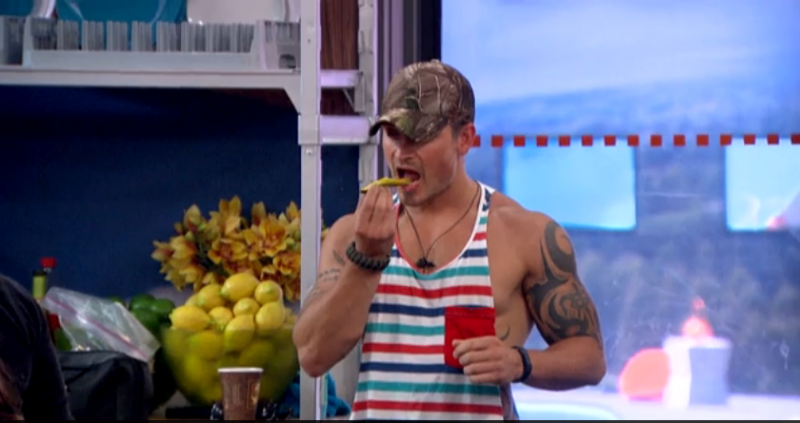 Caleb may be out of the power alliances, but he’s still in the house to gawk at as he does whatever he can to win Amber over.  This week’s activity was to eat a pickle, after Amber foolishly said she’d go on a date with him if he did, after he indicated he hates pickles.  Well, he mans up and eats one, and gets his BB date with Amber.  It goes about as well as you’d expect, with her totally un-invested, glancing at Cody, and acting as one would when they’d rather be ANYWHERE else than there.  I have to still laugh – Caleb is hot as fuck, yet Amber is NOT INTERESTED.  I don’t get it, but it just must be that he’s way too overbearing or smells weird or farts or something. 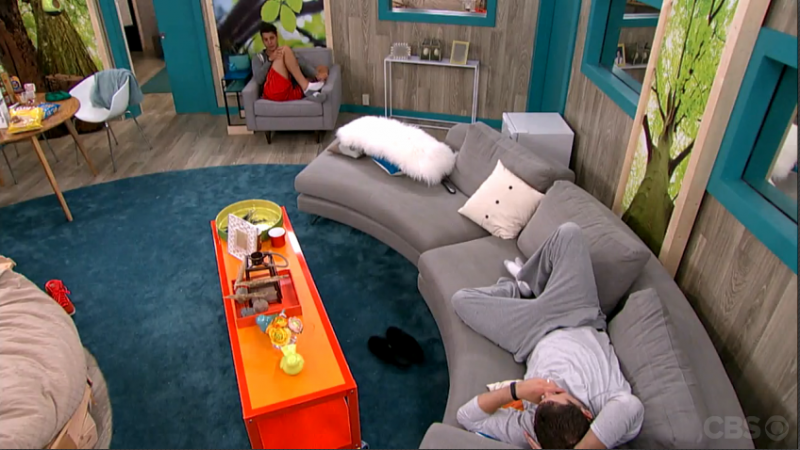 Also, a New Alliance!  Cody and Derrick make a Final 2 deal and are calling themselves The Hitmen.  I’m tired of all these alliances. 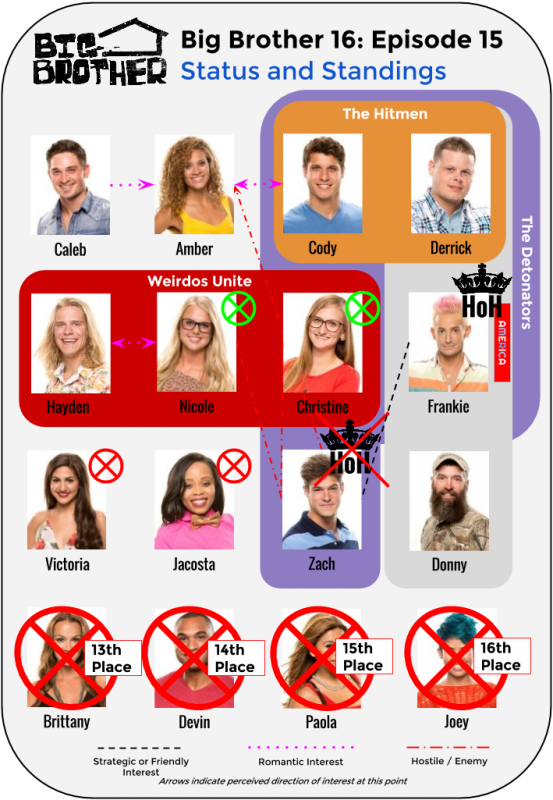 This episode had a lot of stuff going on – and lots of rage lines to Zach.  I could probably draw from everyone to him and be accurate, but I feel like Amber, Nicole and Christine are clear paths of hostility.  I’m really close to making the Detonators hollow, but I’ll give it another episode.  Of course we also now have The Hitmen in play.  So much is happening!!!!

Last, but not Least

You didn’t think I’d forgotten, did you?  Alas, this episode was totally easy to judge as Cody was barely in this episode!  Caleb gets all the cute hot points, even if he is misguided and a touch stalker-y.  Those issues are irrelevant when I have a contest to judge. 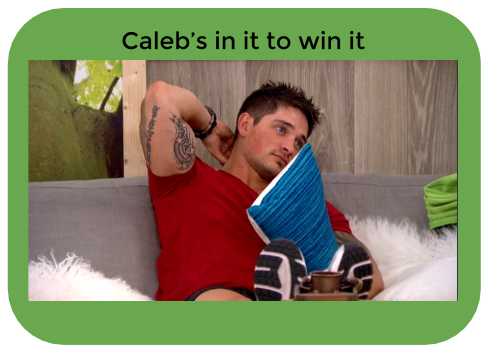