It was a VERY productive weekend for me & Larry. Â Exhausting and expensive, but well worth it.

The first part of Saturday was spent fulfilling my deal to my mom for her birthday, which was to get her a new TV. Â I bought it from Best Buy earlier in the week and luckily they do a hold until you pick it up, so we swung by the Duarte Best Buy, got the TV (and soundbar and Blu-Ray player), and then began the process of bringing them into the 21st century. Â First we moved her old TV up to their bedroom and set that up, then got the new system all setup downstairs. Â There may be a time for getting used to the new system, but I think all parties are happy with being able to clearly see the programming as well as hearing it clearly too! Â I have to admit, the soundbar’s performance way exceeded what I was expecting. Â For a low cost, you can get some really good surround-type sound with a very strong center.

But Saturday wasn’t over yet, as once the training was done at Mom’s, we were off to IKEA in Burbank. 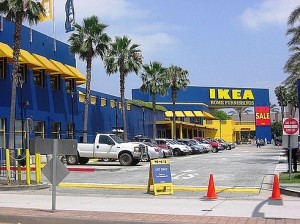 Larry had been wanting to finally take care of our office as honestly, it was one of the places in our apartment in which it was functional, but hardly something we were proud of walking through, especially with guests. Â There’s just a lot of shit everywhere. Â And if you’re trying to go to the roofdeck, you have to navigate through our mess. And if you’re drunk and going through the office to the roofdeck, it’s even worse!

So Larry spec’d out an office layout with new desks, bookshelves, and storage/filing units. Â He used IKEA’s pretty decent website to basically figure out what we needed, as well as built a shopping list with aisles and bin numbers that made our process that much easier.

Have you ever been to IKEA? Â I admit I’m a relative newbie when it comes to the whole IKEA methodology. Â In fact, I had not purchased anything from them until the beginning of this year when we got the bathroom cabinet and nightstands. Â It’s insane how big these stores have to be.

So on this particular adventure, we had two full desks and accessories, two full filing cabinet sections, and two low bookcases. Â Whew. Â Lots of stuff…and while I thought we did a perfect job of inventorying and getting everything….we missed ONE piece. Â Out of 34 total though, not too shabby. Â I can live without a file cabinet front in the meantime – luckily I work relatively near the IKEA in Burbank so I can pick it up then. Â Poor Larry got an injury though – IKEA has a taste for blood….evil bastards. Â When he went to grab a box filled with lots of heavy boards for building a file cabinet base, the cardboard box broke and heavy pieces within flew out and slammed into his foot. Â Once we got home, it looked like his big toe had taken quite a beating – nothing broken, but hella bruised and it’s possible his toe nail may not stick around. Â Every time I mention that last part to him, he gets a bit queasy.
Anyway, neither of us have a truck so we paid the $60 to get all that crap delivered the next day. Â So Sunday was project day! Â We thought we might be able to do it all today, but after knocking out the cube bookcases relatively easily, the file cabinets kicked our ass and drained us of our motivation for the big kahunas, the desks. Â This week though, we’ll get it done. Â And with no more further ado, the pics from Part 1 of our IKEA office adventure…..found in full at the Picasa web gallery linked here:
https://picasaweb.google.com/hobiewan76/20111030Part1OfOurIKEAOfficeRenovation?authuser=0&feat=directlink
And here are highlights from that album for viewing right here:
Next »