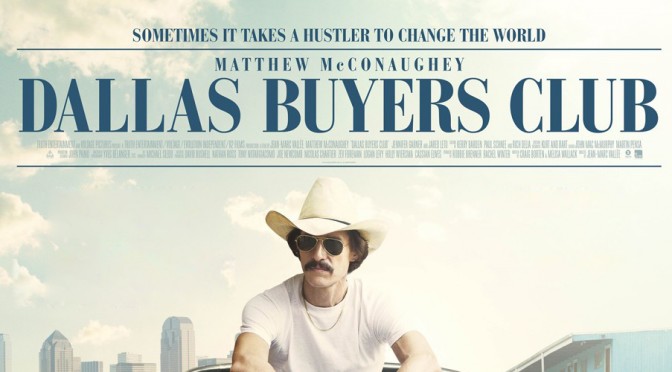 We are on a kick to catch up on the Oscar-nominated movies for this year, so Nicki has started setting up some weeknight adventures to see them!  Last night was our chance to go see Dallas Buyers Club, the movie starring Matthew McConaughey and Jared Leto, both playing roles in which they’re barely recognizable.

First things first, I do think Dallas Buyers Club is a good movie and well-deserving of the accolades it’s getting.  It’s a tough story to tell and it’s done in a very compelling manner, but the first thing to get over is that Ron Woodroof, who Matthew McConaughey plays, is just not a nice guy.  Sure, by the end of the movie, he’s certainly learned to change his tune with regards to his feelings about gays and transgenders, but it’s no miraculous change that some movies could easily have gone for.  Instead, it feels real, especially considering the 1980s timeframe the movie is set in.  People associated AIDS/HIV with gay people and if you were infected, it just provided even more reason to hate you.  And if you weren’t even gay and got AIDS?  Well, that’s the story we get to watch in this movie.

From the beginning of the movie, you see that Ron is not in good health.  I was frankly surprised at the amount of sexual attention he was getting as he’s already emaciated before he’s officially diagnosed with HIV.  It’s like, I know it’s Matthew McConaughey, but he looks terrible here.  He’s unrecognizable.  Then of course, he ends up in the hospital and finds out he’s infected.  Even more, he’s only got 30 more days to live, according to the doctor.  Facing death head on, Ron aggressively pursues unofficial AZT treatment, which was the only FDA-approved drug at the time used to combat HIV.  He eventually is forced to Mexico where he not only learns AZT only makes things worse for your body, but also that there are other alternatives.  It’s at this point that Ron’s story really gets going, as he sees not only a lifesaver for himself, but also a moneymaking opportunity.  Sure enough, he sets up the Dallas Buyers Club, a group that requires a monthly fee but gets you all the access you want to the alternative medicines and vitamins that actually prove to be somewhat beneficial to an HIV-sufferers life.  Of course, becoming your own unlicensed pharmacy isn’t exactly the height of legality.

Ron isn’t able to create the Club on his own though.  In the hospital, he meets a transgender woman named Rayon, played by Jared Leto.  Jared Leto is UNRECOGNIZABLE as Rayon.  Nicki didn’t even realize it was him until halfway through the movie!  Give him the Supporting Actor Oscar now as no one else is even close to winning this.  Rayon is an amazing character, as she is shrewd, funny, and able to see that Ron’s efforts need someone on the inside of the gay/trans community.  Their partnership is nevertheless a strained one as Ron has a very hard time being able to get over his homophobia.

Dallas Buyers Club is not a sappy movie by any means.   It’s an honest movie that rarely pulls punches.  Contracting HIV in the 1980s was effectively a death sentence and this movie doesn’t shy away from it.  While watching it, you can’t help but be forced to ponder your own mortality (I know, Yay!!) and analyze whether you’d have the fight in you to change the outcome.  I enjoyed the movie; some of the others in our group didn’t.   I think we all appreciated the fantastic performances by the actors (Jennifer Garner also stars in a great supporting role as a doctor that interacts with Ron over the course of his journey and who slowly comes to realize that the Dallas Buyers Club is doing a lot of good), but some of the story points are just hard to have to deal with.   I can’t say I’d want to rush out and see it again (like I said, it’s not exactly a crowd-pleaser!), although Jared Leto’s scenes are almost all gold and help provide much needed levity.

Next up on our queue?  Nebraska, next Tuesday.

Our official photo at the Sears Tower
View at Picasa