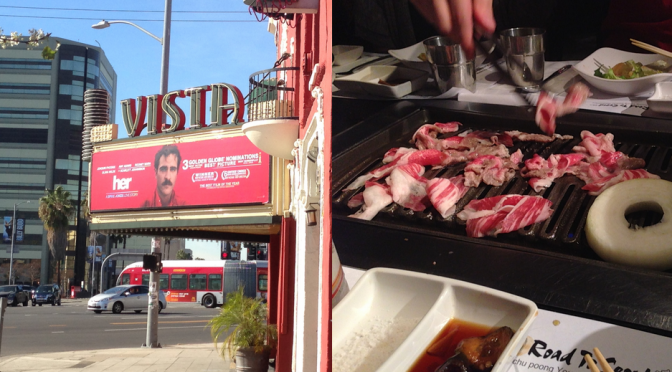 Got out of the house today!  After an easy morning of waffles, we walked over to our favorite local cinema, The Vista, and caught a showing of Her.  Nicki had already seen it and had come away unimpressed.  I was pretty ready to disagree with her after the first 45 minutes or so, as the movie was very compelling and interesting.  It was just the last half in which the movie lost both Larry & me.  The premise of the movie is that in the near future, you’re able to buy an operating system for your computer and devices that is an A.I. (Artificial Intelligence) which is customized for you and responds pretty much like a human would.  Our protagonist Theodore, played by Joaquin Phoenix (who is probably my closest Hollywood resemblance, at least in some pics) falls in love with his OS, named Samantha.  Like, really falls in love with it and tells other people that Samantha is his girlfriend.  And other people completely understand.  The movie world that we get to glimpse is probably the most compelling part of the movie, as it’s a Los Angeles that is familiar but also idealized.  Everyone takes the train, because why wouldn’t you, when it takes you everywhere, whether it’s the beach or the mountains?  And this LA has a ton of skyscrapers and beautiful environments which one could easily get lost in.  It’s almost depressing to not live in that version of LA.  I digress.  The movie takes the relationship of Theodore and Samantha to its logical conclusions and beyond, which is when it’s just like, wha’?  I definitely get that there’s a message about loneliness and wanting to find someone or something that is as understanding as the OS ends up being, because human relationships can always be so messy.  But then we end up with AIs that also get messy and emotional and effectively sentient, but rather than a Terminator-type ending, you get something…different.  I can recommend Her for the wondrous look and feel of it as well as the futuristic and wonderful Los Angeles it presents, but you’re on your own for the relationship side.

After the movie, it was time to relax a little before heading back out!  Yes, it’s a busy and packed weekend, which is a little exciting.  I made a batch of chocolate-chip cookies for tomorrow’s fun, as I knew that there’d be limited time tomorrow.  After that, it was then time to head out to Koreatown and meet up with everyone for some Korean BBQ at Road to Seoul.  Michael set this up and picked Road to Seoul as he rates it as pretty much the best one in town.  I can’t really disagree with his assessment, as it was pretty damn good.  I’m just extraordinarily full, and I am pretty sure I smell like BBQ.  What’s funny (or disgusting) is that long after I surrendered, these other young folk around me kept on, ordering plate after plate and putting that food away. It was unreal.  More power to them, as that’s what your 20s are for!  And now we’re back, having meat sweats.  Ugh.  Totally worth it though.