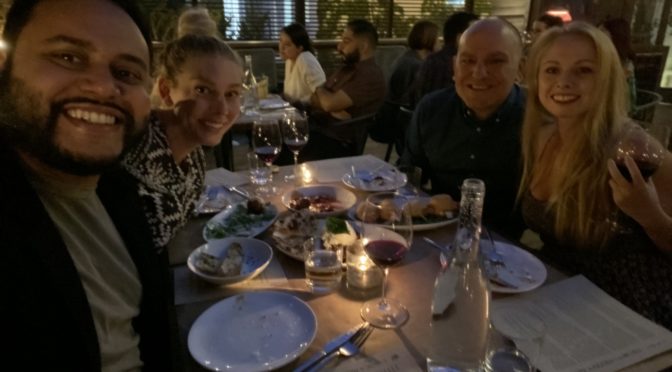 While Larry was still recuperating from his hepatic pump surgery back in Ft Lee, I had come back home.  During that time (Larry didn’t return to Los Angeles until Oct 19, which was very stressful for him and upon arrival he cried, understandably as we didn’t know if what he went through was going to have been worth it – it turns out, no it wasn’t, writing from March 2020), I had some time to spend with friends, and on that Saturday night, I reached out fairly last-minute to Paras and Carey and ended up inviting myself along to a restaurant they were going to that night called L’Antica Pizzeria da Michele.   Nicki came too and oh man, what a night.   First, the restaurant was spectacular Italian food and wine.   The ambience of this place was so bougie, but so good.  The waiters were all hot.   The vibe was completely awesomeness.  I was texting Larry about all that and couldn’t wait for us to go there when he got back.  We didn’t end up making it there which sucks, but just not in the cards at that point when he got back.

At the restaurant, we managed to put away like 3 or 4 bottles of montepulciano, so the night started off swell!   We didn’t end the night after dinner, and took an Uber to a bar called the Electric Owl further west on Sunset.   It was a very chill bar, where we got to pet some really big dogs and also get helped by some attractive and fun waiters there too.   We were all drunk, or at least seriously buzzed, and it was great.  I probably should have left at that point, because the hangover the next day was gonna suck regardless, but we continued and went to a place called The Den on Sunset.   That was just an entire scene and oof, I was done.   I ended up spending the night on Nicki’s couch as I didn’t want to go all the way home.   That was a rough Sunday.

Inside L’Antica Pizzeria da Michele – this is the waiting area

At our fabulous table

Waiting for an Uber

Drinking even more at the Electric Owl

Ended up at The Den on Sunset