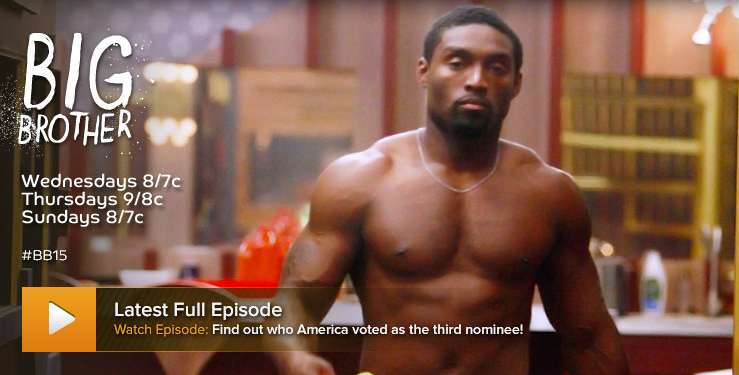 I’m talking to YOU, America.  You put up Amanda as the MVP nominee?  You’re killing me here.  I was all set to title my article “Irregardless” and go on about Howard’s erratic speeches, but then you go and put up my girl.  MY GIRL.  This will not stand.

EDIT:  I just noticed the hilarious double-meaning of “Big Brother” when paired with the pic of Howard above.

America the MVP – F U

Let’s be honest – it’s clear that the Big Brother producers are putting up whoever they damn well please.  Whatever makes the house react the most is exactly who will go up.  This week, Amanda had no reason to think she would go up but obviously if she did, it would throw the house into disarray.  Abracadabra!

Like I mentioned in my previous post, if Aaryn had decided to nominate Amanda herself and make a strategic play, I’d personally hate it, but would still respect it.  I’ll be very disappointed if Amanda ends up evicted tonight – I seriously don’t think she will go home, but the chance is there.

Another very involved and entertaining Veto competition environment (Back to the Future AND Jurassic Park?  Loved it) and all three nominees were giving their all to assemble that three-dimensional Veto puzzle….okay, no.  Spencer certainly did, as did Amanda.  Everyone else?  HOOBOY – that was some sad competition.  Howard was terrible.  Was Aaryn even playing?  And the two people in the house that Howard needed to play for him, Candice and Jessie, were IN the competition with him and were non-factors.

I have to continue giving props to Spencer.  He’s nowhere near a position of power but he keeps hanging around and he’s SMART.  Everytime someone in the majority tells us in the DR that they’re telling Spencer lots of lies in order to play with him, yet in his own DR sessions, he’s completely aware they’re trying to play him.  It’ll be interesting if anyone catches on that Spencer is the real threat and not Howard.

Speaking of Howard – wow those stream-of-consciousness ramblings were quite interesting, weren’t they?  I loved everyone’s reaction when he had his house meeting – LOVED when Howard and Amanda were chatting about their situation and Amanda flat out told Howard she had no idea what he was saying.  Her directness is so hilarious.

For the first time in a long time, the MVP nominee wasn’t the one that had to be replaced, so the HoH, Aaryn, had to get some blood on her hands.  I think after honoring her deal with Helen, this replacement was more of a personal thing for Aaryn.  A likely racist personal thing, but whatever.  Candice knew she was likely going up.  She tried to save herself by reminding Helen that she did have a connection with her & Elissa back in the day, but slightly overplayed when she told Helen that everyone was well aware of the fact that Helen’s controlling the game at this point.

Is it that off the mark?  Nope.  Helen IS controlling the house.  She’s got a loyal yet dumb minion in Elissa.  She also has a very strong partnership with Amanda & McCrae, while also having loyal votes from Andy and Judd.  Jessie may be more of a wildcard now with her professed loyalty to Howard and his situation.  But c’mon, Candice is right.  Helen didn’t like hearing the message though as she knows well-enough that perceived power IS power (ask Varys from Game of Thrones about that!) and that there are repercussions when people want to “fight the power.”  So off Helen went to her crew and basically told a bit of heightened reality to them to make sure everyone felt threatened by Candice.  This could blow up in Helen’s face if Candice doesn’t go home as Candice, while perhaps not good at puzzles, is smart.  And she also said flat out that she will be gunning after Helen and Elissa if she gets the chance.

So who should go?  I clearly don’t want Amanda to go and I think her alliance will protect her.  But should Howard go?  While a monster in sheer physicality, he hasn’t won anything yet.  His strategy is terrible.  His ability to communicate with others is highly suspect.  Could it all be an act?  Maybe, but not likely.  No one trusts him anyway.  So Howard remains a threat only if there is a bench-press HoH competition coming up.  Candice on the other hand?  A lot of threat there.  I personally like Candice and thought she’d be tight with Helen but obviously her relationship with Howard changed that.  So Candice should go, but I think everyone’s still gunning for Howard, so likely Howard is headed out the door tonight.