So….yeah….the dog ate my website?  I’ve been ecstatically lazy when it has come to this website, as you can see.  Facebook has been easier to post sporadic updates, but I admit I don’t even post there all that often.  Just when I want to brag or something.  LOL.  But I also don’t really think Facebook posts lend themselves to my extremely verbose nature.  So then it came back to the fact that I was lazy and then I moved and then I was all, “hey, there’s the beach!”.  So yeah, then I finally got the wake-up call I needed:  Sgt Jenny saying write a fucking website wouldja?

That’s the very short version for why I haven’t written an entry here for nearly 9 months.  Oy.  Obviously plenty has changed in that time:  Larry moved in with me during the remainder of our time in NYC’s wonderful Upper West Side, and then we both moved out together to sunny California as NBC was happy to let me move out here.  So yay on that front.  We found a swank place to live with a roof deck, as seen above.  While the rest of the country melts under the Heat Dome, here in Santa Monica it may not break 70 degrees today.  Seriously.   I bought a new car when I moved out here – a white Mazda 3 that is named Sandy, since she’s a white girl at the beach.  The rest is just nitnoid details that you’ve probably seen on Facebook and the like.

I’m still torn as to where to post pictures – I’ve learned that Apple is going to discontinue the MobileMe service in June of 2012 meaning I have to find another place to host a website.  Because of that it makes little sense to continue hosting pictures here, not to mention the fact that the pictures capability of iWeb is a little, how do I say, fucktarded.  I’ve just joined Google+ and seriously, that ties EVERYTHING together – my email, Picasa, and a bit o’ Facebookness.  Although I only have like 12 connections there, so it’s a tad boring.  But I have a ton of pictures already on Picasa up to about 2009, so I’d like to continue there.  As I really don’t like Facebook having all my pics.  Why oh why am I rambling about pictures????

Michancy is coming down today for a weekend respite from the unholy hell inferno that is Las Vegas.  I looked at a heat map from NOAA and while most of the country is a nice period Red, Las Vegas is that deep dark crimson that means something bad if you see it in your kleenex.  So yeah, I bet she’ll appreciate the cool temps here this weekend.  We’ll probably do sake bombs at the within-walking distance sushi place, Misofishi, and then of course get shitfaced.  And that’s just tonight!!!!

And can I just say, I loved Harry Potter 7 Part 2?  Admittedly, I wish that some things had been tackled differently or with more verve, but overall, it was worth sitting through the HP7 movie marathon in the AMC last weekend.  I’d like to catch it once more in IMAX though, as I imagine that must have been mind-blowing.  I totally want to see Horrible Bosses too though, and Captain America, for obvious reasons: 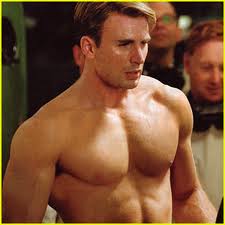 I mean, DAMN.  I could watch a movie of this in some sort of animated GIF format for at least 30 minutes.  I’d probably like some kind of undressing scene too, just since I’m putting it all out there.  Did I say I’m gay?  If not, it’s quite obvious now, isn’t it????  Drool….Chris Evans…..

Wow, this is fun. I forgot taking to my blog in the 2000s and just letting loose with verbal vomit.  Those Las Vegas days were particularly choice.