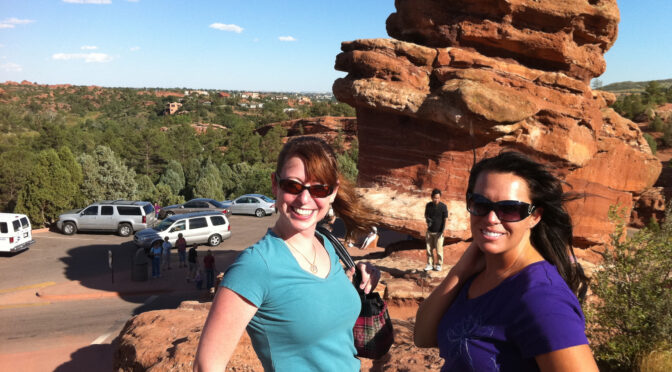 I’m not going to promise you a rose garden, so let’s consider this a place of honesty.  I have plenty of pictures from my trip back to Colorado Springs – that’s true.  But I’m in no condition to post them just yet.  I’ve just returned from an NBC team dinner and yes, I got suitably drunk.  And it’s just past 11pm and I have to go back to work tomorrow.  UGH.  Stupid Thursday night drink nights.  Of course dinner also happened, but let’s just say the drinks won.  So I’ll post my pics this weekend – PROMISE!

I am writing in part because someone sent me an email asking me where my blog update was and I have to confess I’m shocked anyone still is reading!  I’m not even 100% positive who this person is that wrote me an email, but I am willing to wager a guess it’s from a friend I made in the Azores – just a different last name.  I’ll have to write back when I’m sober.  As well as after I’ve posted this entry too!

So just like Sgt Jenny – I seemed to have been unable to continue the 30-day exercise.  I was telling myself recently that it’s not something I can keep up with, but maybe I’ll just continue anyways and fill out answers regardless.  I love talking about myself, and let’s be honest, that’s some fun stuff.

So what’s been going on in my life?  Well, first, I was promoted at work!  I’m a Director at NBC Universal now.  It’s kinda cool.  I’ve been performing these duties a bit as it is anyways the past two years or so anyway, but to get the position title and salary bump is to put it nicely, NICE.  Director Barnes has a nice ring to it.  I also like Captain Barnes, but Director Barnes is something I never ever would have suspected would have been a title I’d get.

Also, went to Los Angeles last week for work – we’re constantly working on expanding our reach, and Universal and the .com worlds are next on our radar.  Look out you guys, you’re about to get rocked with our awesome powers.  In a good way.  We don’t do anything hostile!

That was for a few days though, and thanks to that trip, I was able to swing by home and visit with Mom and Harv.  I love traveling on the company dime!  After returning Thursday evening, it was a trip back home to change suitcases and pack up for the next flight out the following morning out to Colorado Springs, this time with Larry in tow.  It was a trip to just get a little bit of vacation and to show Larry around my previous hood.  We spent the time with Kelly Dean, Eric and Susan primarily and it was a phenomenal vacation.  We got to drive up Pikes Peak, visit the Coors Brewery, tour Cheyenne Mountain (so weird and yet so cool to visit it again as a civilian – which I am now as my 3 years of inactive reserve status ended the 1st of September!!!! Yeehaw!), and also go to the Royal Gorge.  Yes, those pictures are on the way this weekend.  I promise.  Lots of fun and lots of good times – I really miss those friends I made there.  Le Sigh.

Oh yeah – what’s a Chinese Silver Tube?  Well, on the flight out to Colorado Springs, while we were about to deplane in Dallas, the flight attendant got on the intercom and told us that because we were in these Chinese Silver Tubes, would we mind closing the window shades as if we don’t, the plane heats up significantly.  Well, he didn’t actually say Chinese Silver Tubes though…but it certainly sounded like it.  It was actually Shiny Silver Tubes….but I like my (and Larry’s) interpretation better!

I’ll continue the 30-day thing later – I can’t think of a photo immediately that makes me angry/sad just now.  I want to put away my laundry and pass out.