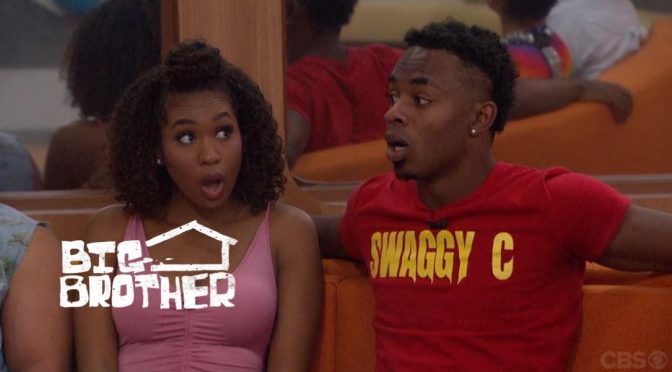 I was thrilled with the ultimate outcome of who stayed and who went this first eviction.   I was very surprised though how it came to be that this was the result, as it only happened due to some strange circumstances.

First up, let’s talk about the first Power of Veto Competition!

Big Brother went all out for this first Veto comp.  Each of these competitions would likely have been worthy of being a full competition on their own, and there were 5!  At each stage, whoever came in last would be eliminated, with the remainder moving on to the next stage. 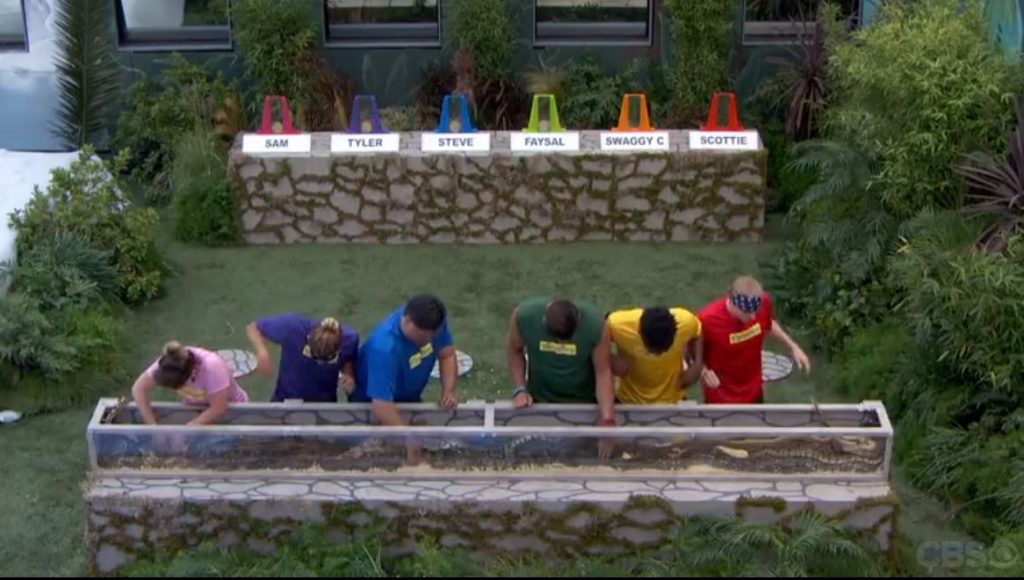 First Stage?  Snakes!  Each houseguest had to put their hands in a snake terrarium and get 3 “Like” discs.   In this the time had to run out as both Swaggy and Scottie couldn’t get shit done.   Fortunately for Swaggy, he managed to get at least one disc while Scottie didn’t – and so Scottie was first eliminated. 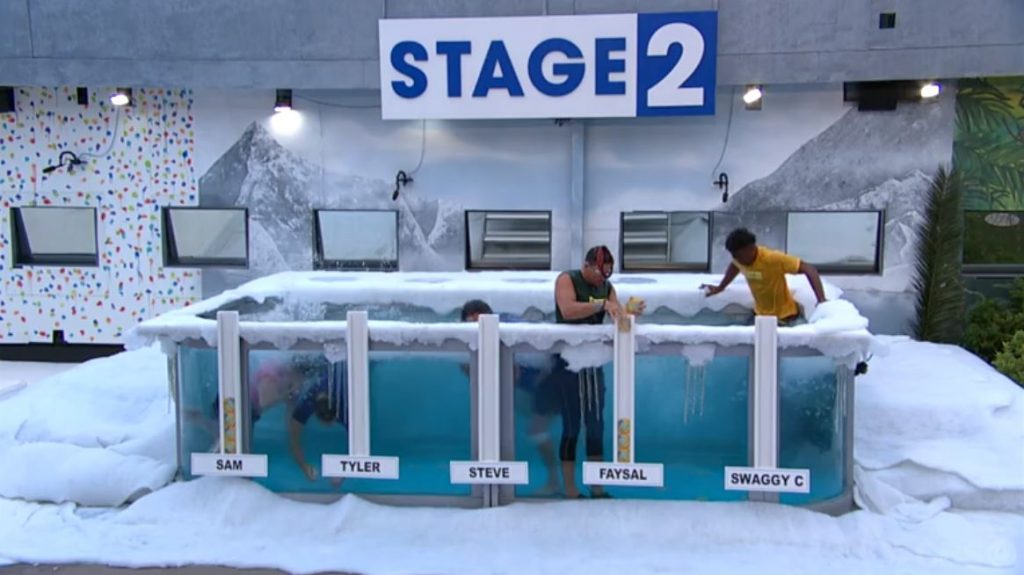 Second Stage?  Ice Water!  Another situation where you had to get discs (10, this time) and not be the last one to do so.   Swaggy ended up coming up short on this as he had just learned to swim before the show.   Not that swimming had anything to do with this as you could stand.  SMDH. 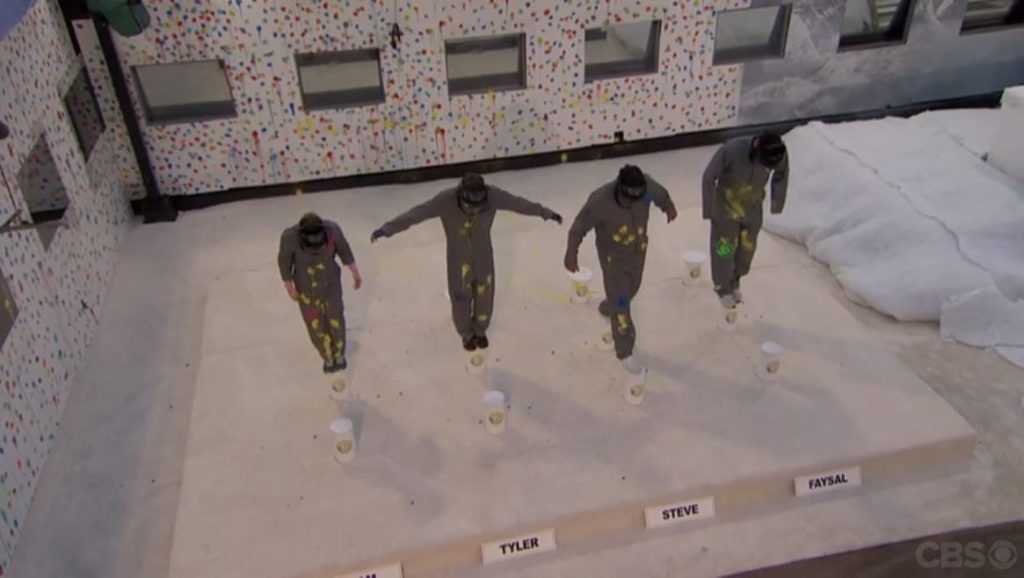 Third Stage?  Paint and Balance!  While standing on progressively smaller posts, you had to not be the first to fall off while getting pelted with paint.   Steve was who fell here while moving to the last post. 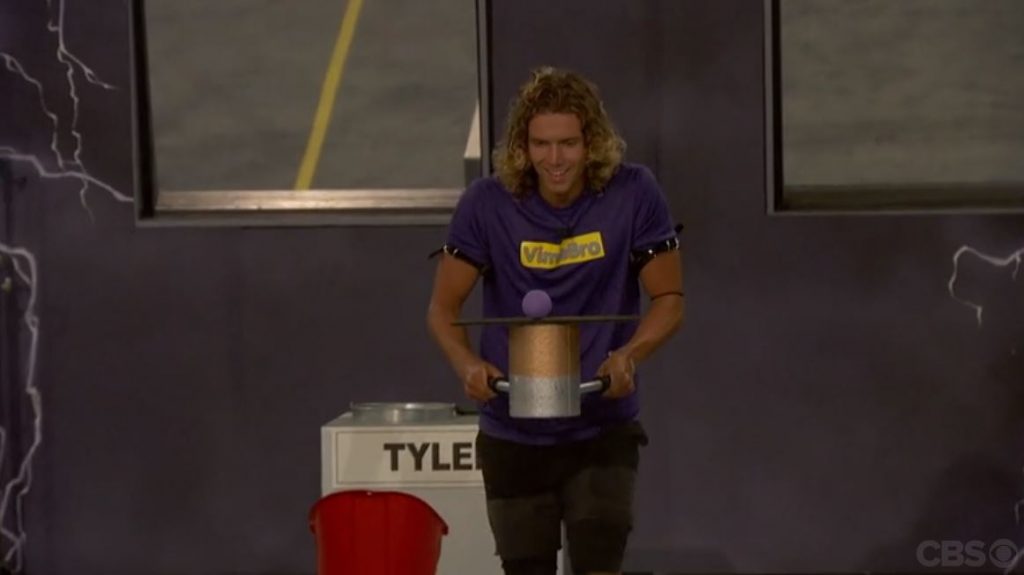 Fourth Stage?  Electrocution!  Shock collars on your arms while you transport 10 balls.   FUN.   Sam couldn’t keep up with Tyler and Faysal here. 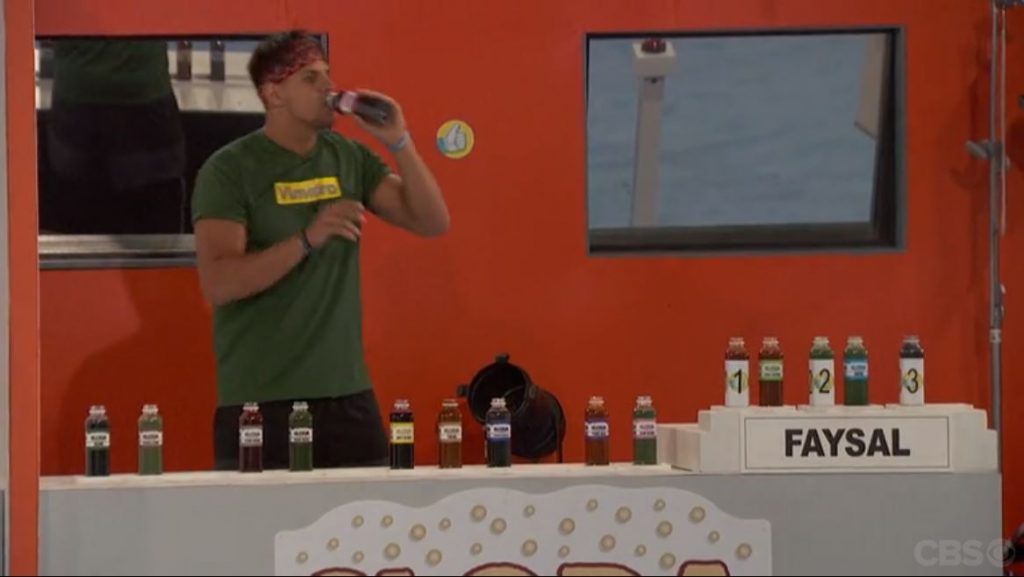 Fifth Stage?  Something about drinks.  I honestly don’t remember what this was about.  Just that Faysal briefly chatted with Tyler about making sure that the right person won Veto now and to correctly play it.   Tyler decided to throw it and Faysal won the Power of Veto!

Long story short?   Faysal was worried about who would be the replacement nominee as Tyler had indicated that Bayleigh was the likely replacement which was no good for Swaggy, who is in Faysal’s alliance.   So with that fear, Faysal didn’t use the Veto and Sam and Steve stayed the nominees. 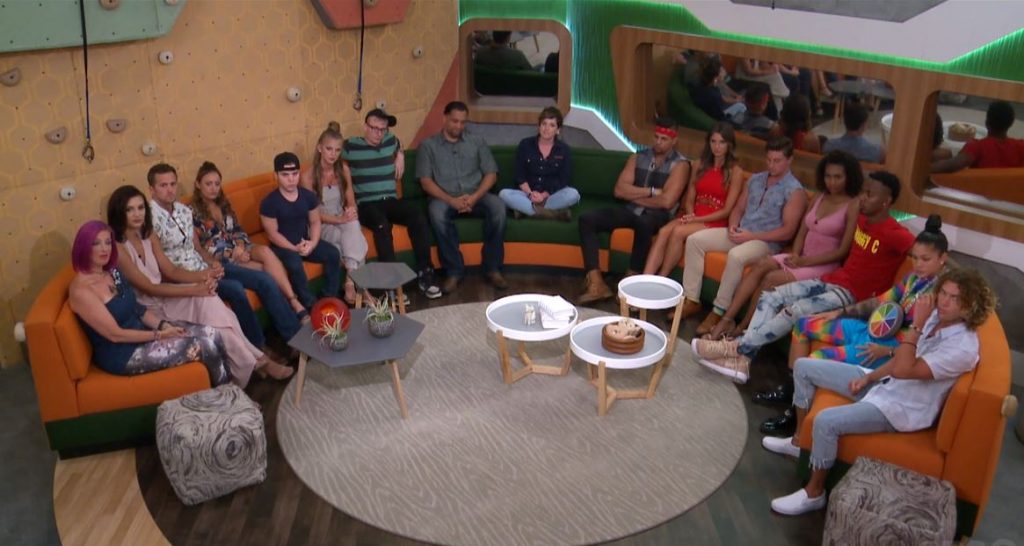 I had been thinking that Sam was gonna stay but then this episode really made it clear that uh, my counting skills are rusty.  It turns out that with Tyler unable to vote, only 5 of Level 6 could vote, but Sam also had befriended JC, so that made 6 votes.  But on the other side of the house, FOUTTE had 5 votes for Steve, along with Bayleigh (who is surprisingly not part of FOUTTE?), for 6 votes.   Steve also had built a strong relationship with Scottie, so guess what?  He’s got 7 votes in his favor.  RUH ROH.

The Bayleigh-Swaggy showmance is the house’s strongest showmance right now, so we’re not talking about that.  Instead, it’s the Winston-Brett relationship that FINALLY is blooming!!!!!!!!!….. Okay, that’s just a bromance for now too, but I’m tapping my foot expectantly on that one.  🙂  It’s actually all about the Faysal, unsurprisingly, as that is one big, attractive man: 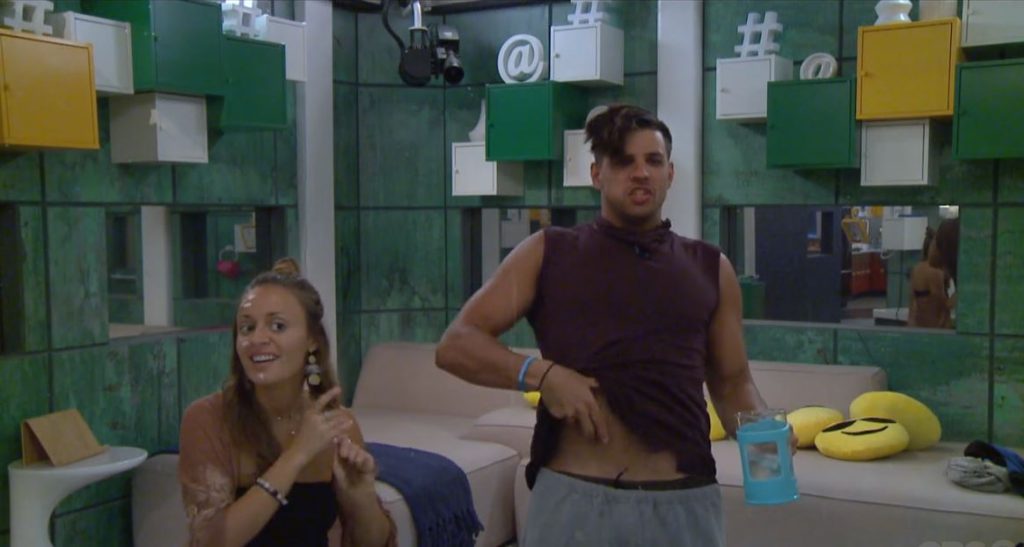 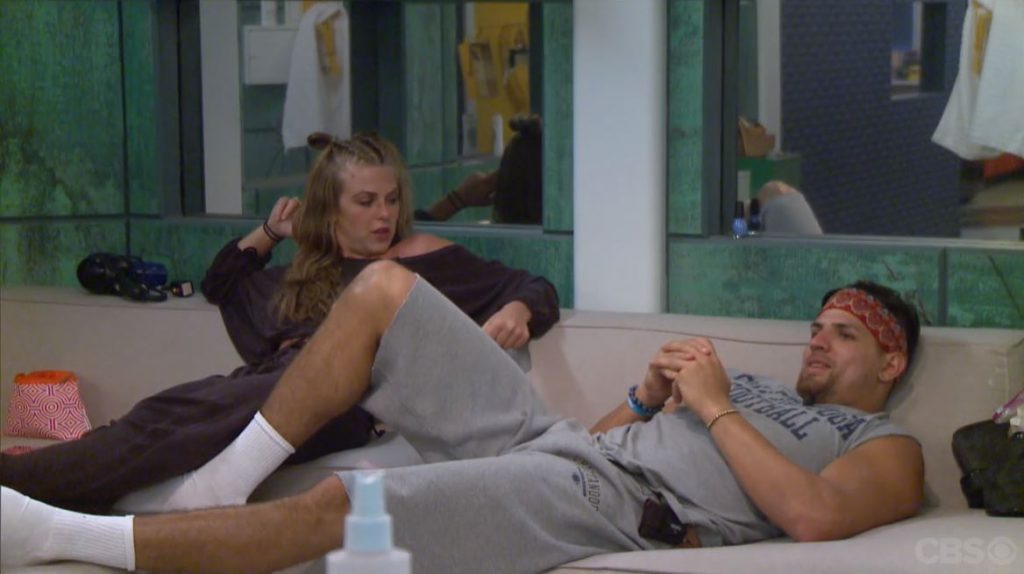 Faysal finds himself as the object of both Kaitlyn’s and Haleigh’s affections.  It seems though that Kaitlyn and Faysal are more “buds” as we see that Faysal is certainly more interested in reciprocating feelings towards Haleigh.  Haleigh proposes a “Low-Mance” as she is nervous about being an obvious pair…and later in bed, they kiss.   Which hilariously Kaitlyn keeps walking in on.  Miss Kaitlyn is NOT amused.

So what’s this Low-Mance Effect?   Well, Kaitlyn is pissed.   She realizes now that she’s not going to be Faysal’s Ride-or-Die and that she’s actually alone in that regards to not having a pair herself, as there’s Bayleigh/Swaggy, Faysal/Haleigh, and even Scottie/Steve.   It’s that last one that Kaitlyn now realizes is something she could do something about to remove at least one of these pairings.   And it’s like, are the editors toying with us as they always do?  Will Kaitlyn end up refusing to make a move? 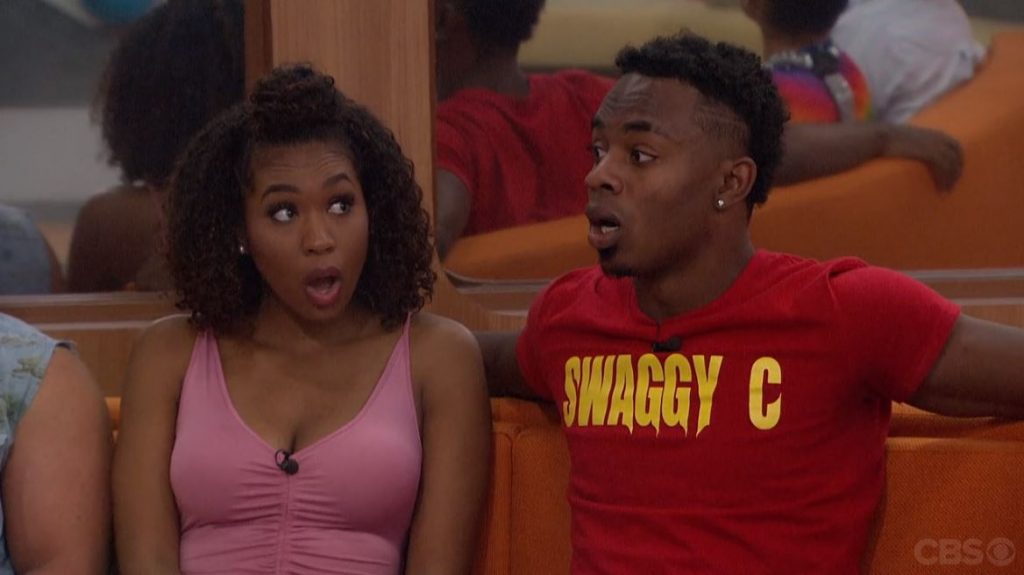 Nope.   Kaitlyn votes to evict Steve, and it’s clear that the Steve side of the house is stunned.   Well, well, color me intrigued.   Someone willing to make a big move so early!   Go on with your bad self, Kaitlyn. 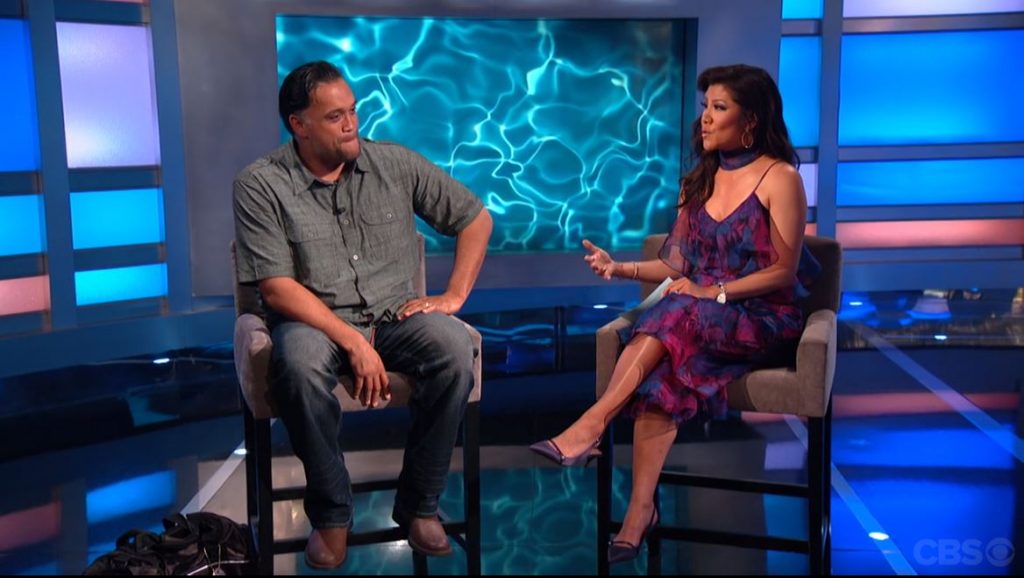 Sam doesn’t have to use her Bonus Life power, so now CBS has lots of time to kill, which means Julie talks a LOT to Steve.  We find out Steve likes to make up words, such as “discluded” when referring to the fact that the houseguests didn’t leave him out of reindeer games.  Anyway, goodbye Bargain Derrick.  Won’t miss you, although Scottie is probably sweating a bit more than before.

Kaitlyn Goes On With Her Bad Self 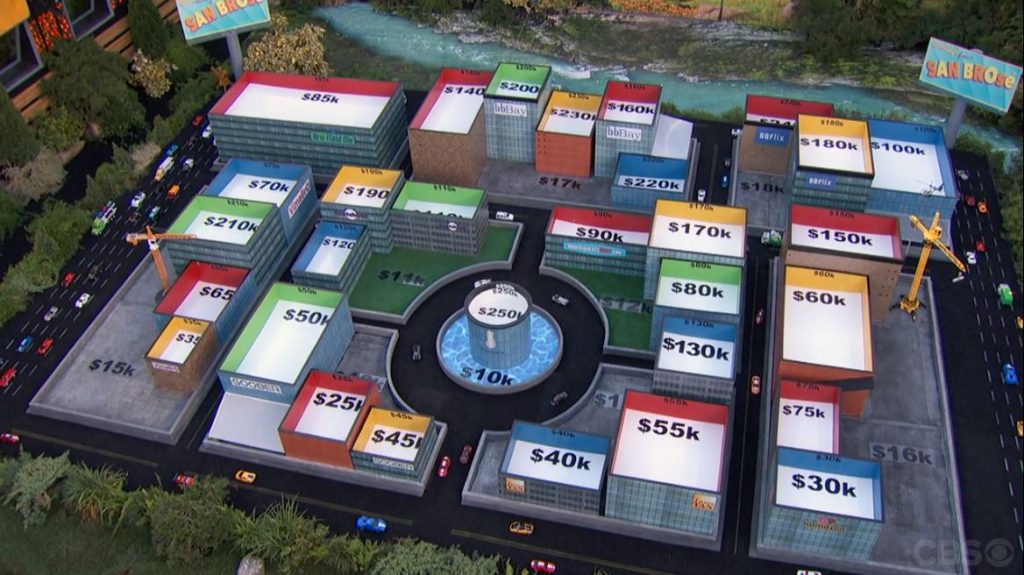 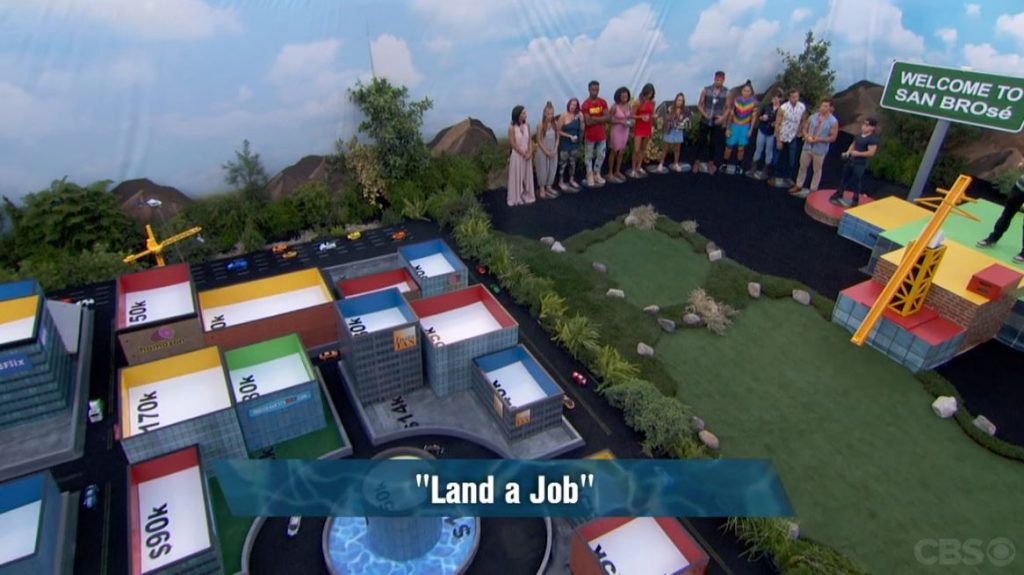 In this pretty damn cool HoH stage, each houseguest has one ball they need to launch into San BROse to try to get the highest salary possible.  Alas, if you end up out of bounds of in the streets, you get nothing.   Guess what?  Scottie is briefly the winner, but gets knocked out by Sam, who gets knocked out by Kaitlyn.   No other guys even get on the board. 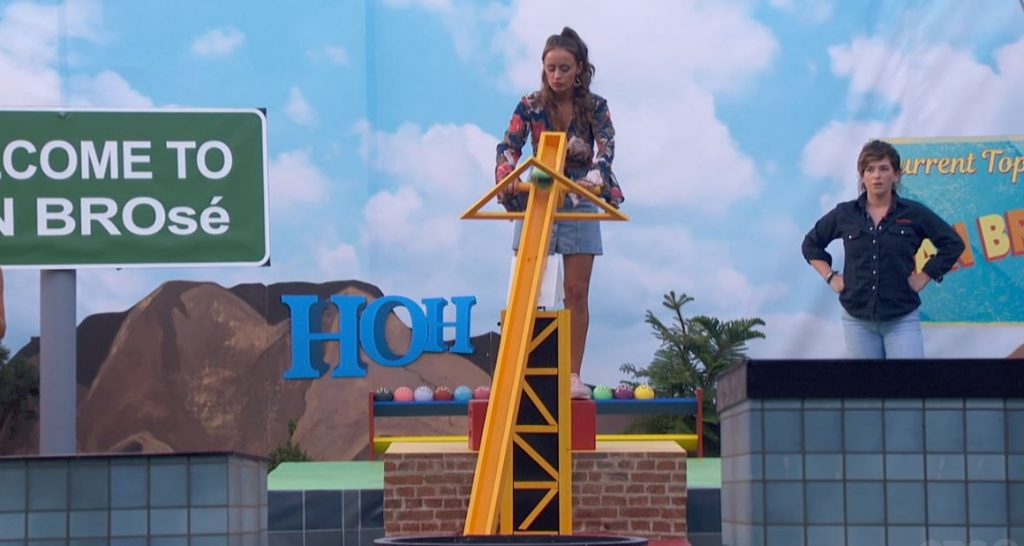 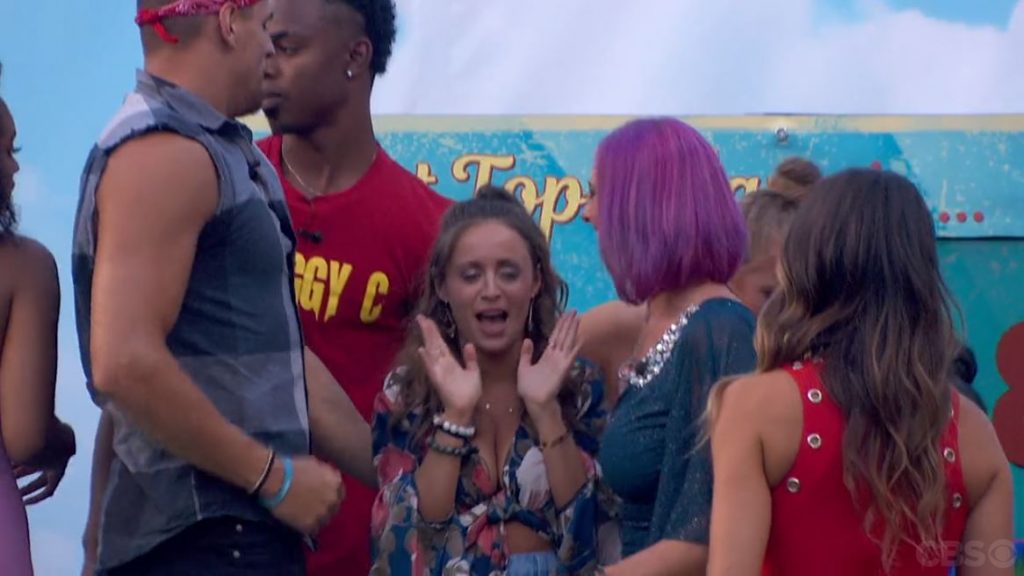 Kaitlyn gets HoH!  I have no idea how it’s going to shake out.   She turned on FOUTTE but I think it was a temporary thing as neither Sam nor Steve were truly in FOUTTE, but Steve was a bigger threat since he was part of a pair.  Clearly though, no one is aware that Kaitlyn was going to make that move, so who she ends up nominating will be interesting.  I think Sam is yet again in danger, but Kaitlyn could choose to target Angela as Swaggy has been wanting for so long.  Will be interesting to see how that shakes out. 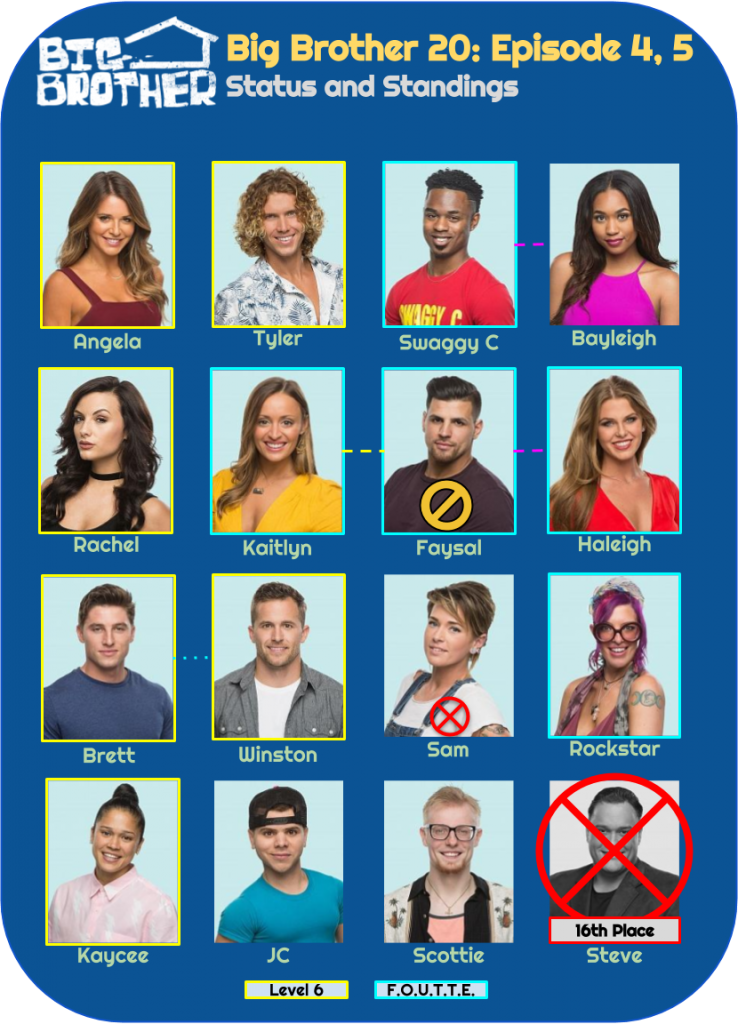