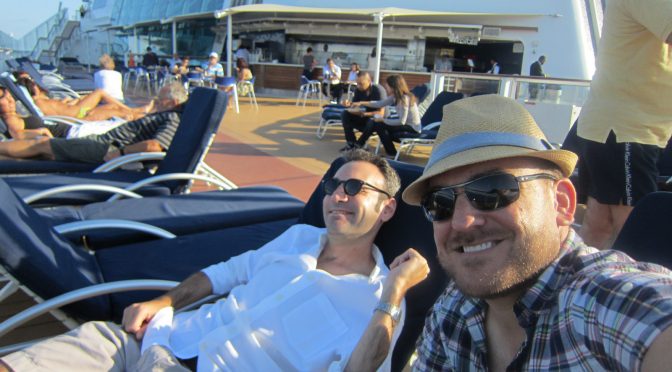 After a fantastic few days in beautiful Rome, we wrapped up our Roman Holiday there in order to begin the true vacation on the Celebrity Equinox!  First things first, we had to get re-packed and ready for a bit of a hustle, as instead of doing the sane thing and calling a cab to take us to the harbor city of Civitivecchia, which happens to be about 45 minutes or so away by road from Rome, I thought an adventure by train was in order.   I had read plenty online about how to do it and frankly, it was cheaper, and quite easy.  But that “easy” part?  That’s if you’re traveling light.  We were far from traveling light, as not only had we packed for both a 3-day Roman vacation, but also an 11-night cruise, including formalwear.  So yeah, lots of bags.

After checking out of the great Best Western Hotel Royal Santina, it was time to schlep ourselves over to the nearby Roma Termini.  Frankly, the easiest part about this was that our hotel was very near to the train station.  But that was it.  Because once we figured out the right tickets to buy, we had not a  clue which track was the right one.  None of the ones we were near were right.  Only after getting a bit of help at the info booth did we discover that the train track we needed was pretty much as far away as you could get from where we were.  So more schlepping of luggage.  We managed to get there with plenty of time and actually had a nice comfortable place to sit and put our luggage, which was a relief.  We were able to spend that time cooling down and drinking water, as I knew that our death marches weren’t over for the day yet.

The train ride from Rome to Civitivecchia is gorgeous.  After getting an interesting view of Rome from the tracks, you then ride through beautiful farmland and countryside until finally you end up on a traintrack along the Italian coast.  Ah-MAH-zing.  All the nonsense was worth it at that point, even if we were drenched in sweat.  This train wasn’t ending in Civitivecchia though and you had to be paying attention to the stops, as you could easily end up missing it.  Of course, we didn’t, as I am an amazing navigator.  We got off the train fairly easily, but then you’re now at a train station in the town of Civitivecchia but the cruise port is still a mile away.  Ugh.  And as I read about on the internet, there really isn’t a taxi scene there.  So you walk.  And walk we did.  Did I mention it was effing humid and hot at this point too?  I didn’t?  It was effing humid and hot.  Larry & I continued the schlep of our luggage along the coast, walking along the beautiful coast and the quaint little shops and restaurants, surely disturbing or amusing the patrons.  Whatevs.   I knew where we were going, at least I hoped I did.

Train Ride to the Coast

You can see the mood lighting here – blue now, but can be red or green too.

A relieved Larry in the train as we await departure

The view of Termini as we pull away

View from the train as we got next to the shoreline

Exciting to finally see the Sea, even if it was hot as balls

Fortunately, I did know where I was going and we made it to the Castel Columbus (or something), where the massive cruise port is.  At this point, things get a bit easier for you, as you just have to wait for the frequent shuttle buses for your particular cruise line (Celebrity, for us), load up your luggage, and then get driven to the embarkation area.  There was a bit of confusion by most of the people waiting at the shuttle bus station though, as it seemed they were all first-timers too.  Two buses came by that weren’t for us but finally a big Celebrity bus came and my sense of relief started to finally come.  It was even air-conditioned.  Praise the gods!

The embarkation terminal was a relief as well, as we could finally drop off our fucking luggage to a porter.  At that point, we just had our carry-on bag with our IDs and such and it was time to check-in for the cruise.  This took a bit of time but who cared at that point, as the ginormous Equinox was right there awaiting us, as were the many drinks we were about to consume!  The staff ends up taking possession of your passport, with your Celebrity SeaPass effectively becoming your ticket in and out of each of the countries.  It’s also your drink card.  That fucking card is magic.  After completing check-in, we boarded the Equinox and truly, finally, the next phase of our vacation was at hand….we were on a muthafuckin’ SHIP!   Upon arrival, you’re even handed a glass of champagne.  FINALLY.

Arrival at the Cruise Terminal at Civitivecchia

That’s the hint of how huge our boat was…

And that’s our ship, the Celebrity Equinox

Massive doesn’t really describe it. I think the Titanic would look quaint next to it.

As we boarded for the first time

The first thing to notice was our awesome deck. This was our view while docked.

Our wonderful and relaxing deck area

The view of the lifeboats from our Concierge-class stateroom

Where our ship would eventually head to get out

From the other direction

A steward then grabs you and takes you to your room – we ended up on the 11th floor (yes, 11th – there are actually 16 stories to this bad boy, I believe) on the Penthouse Deck in room 1649, which was situated on the port (left) side of the ship near the back.  We booked Concierge Class which means you pay for a bit more pampering as well as nicer rooms.  Our room was amazing.  The balcony….oh, the balcony.  It’s so wonderful to sit on a balcony while looking out over the water.  It was spacious too, so you could recline a bit while sipping on a drink.  Another perk of Concierge Class when leaving is a chilled bottle of champagne waiting in your room – yeah, we finished that bad boy up.  🙂  After finally stopping the geek-out of how cool our room was, Larry & I both called our families to let them know we were onboard and ready to sail.  We then started our initial exploration of the ship, ending up first on the pool deck area and grabbing some food at the grill as we were STARVING.  The drinking began in earnest at that point too.  We had a Classic Drinks Package, meaning we could drink as much as we wanted but certain higher-level brands of alcohol were off limits.  It didn’t really impact us that much for the cruise, honestly.  I think though (speaking in 2012 and about to go another cruise in May 2013), we’re ready to go to Premium level. It’s such a nice thing to not worry about another bill at the end and having to worry about it.  Plus, if you love alcohol?  Yay!

This was what the main lobby looked like from our deck, 11

Looking up towards the pool deck

All these deck chairs ready for action

People jumped in the pool before we even left the port

Heineken was my first drink, but trust, I did indulge in other spirits

A Corona for Larry, as we started to walk around and check everyone out

More shots of the port

The view from as high up as we could go, Deck 16

The real Lawn area, which also had a Hot Glass Blowing area

At the rear of the ship, where we would visit plenty throughout the journey

Quite a scenic ship

As you can see, we finally cast off and began the journey

Button up your shirt, Barnes

Amongst the hordes watching the departure

Later that evening, we ventured to the Martini Bar, and I buttoned my shirt a bit more

But the drinks smoked, so that was kinda cool

And we got to drink one each

Unsure about all this craziness!

We missed the main dinner seating that night, so we went to the Chinese Food restaurant! Sweet!

The pool at night – very cool

There was a very cool party atmosphere around the pool area as the Equinox began to actually leave the port, and by that point, I was in heaven.  It really was such a great start to the vacation, especially after the hectic activities getting there.  Totally worth it all, and as you will see in the other pages to follow, lots of exciting destinations and experiences awaited us!