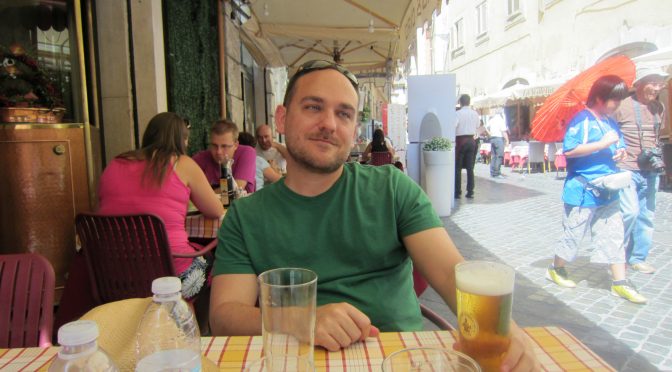 So on our last day we were able to take a little bit of time before heading out so we did just that. After a breakfast at our hotel’s swanky breakfast area with the coffee machine that Larry loved, we went to the metro station at Termini to head towards where Castel sant Angelo is. When we got down to where the platform was, it was mobbed with people though, which was not altogether surprising but still frustrating as it was late Sunday morning. We were glad that we weren’t headed to the Vatican as the last Sunday of the month, it’s free. Of course, that means everybody goes there. So there we are at the subway and the mob of people at the two entryways isn’t moving at all. We also see that you really can’t get out as both escalators were heading down and the staircase was blocked off. There was a blocked off path to the other direction of the platform and it was probably an attempt to keep the traffic flow of pedestrians from interfering with each other. Well, people were now passing through that barrier to just get out of the mob. It was fortunate though as it turned out we were able to walk down the opposite platform to an entryway back to our platform where of course it was completely clear. At that moment the train showed up and were able to walk right in and be in a completely non crowded car. We figure it must have been a tour group or something clogging the entryway but frustrating nonetheless.

We took the subway to the same stop we went to yesterday for the Vatican, but this time, when we got off, along with seemingly all of Rome, instead of following the masses to the Vatican we veered east and away from the crowd. It was almost magical as the streets were pretty much deserted at that point. Larry and I both felt that that area seemed a lot like the Upper West or East Side. I also remembered that the hotel I stayed in ten years ago was in that neighborhood, but I can’t remember exactly where.

We walked down to the castle, the amazing circular fortress that used to be where the pope could go for defenses. It’s also a challenging level for Ezio in Assassin’s Creed! It was fun to get to see the inside for myself finally and the real thing looked a lot like the video game interpretation. Crazy. Great views of St Peters from the upper balconies too. You can see the pictures.

Castel Sant Angelo in the distance

Looking into the moat, which is now a pleasant park.

Larry shows us the way

Me, my hat, and St Pietro

Looking up from the base of the circular Castel

Larry’s nervous in the passageway

I intend to photoshop in Ezio-like assassin blades one day

A courtyard that served as Lucrezia Borgia’s garden once

The view from the first circular tier

There’s an (overpriced) bar area up here too

Harry Potter and me

A view of the Pope’s path

Larry amidst the windows

St Peters through the window

What awaits you at the top of the Castel

Looking towards the Hall of Justice

Lots of Rome there, including the Pantheon and the Campidoglio

St Peters from up top

Had to get the shot

Larry just wants out of the sun

It’s a cool centerpiece…for a rooftop

View at the Castel bridge

Castel from down below

You too can eat amongst the river bushes

It was warm that day too, but probably not as bad as it was our first day. We walked from the castle along the river to where the Hall of Justice was, then turned inland to retrace some of our steps, in the daylight, of the nighttime walking tour we took yesterday. So we got back to the Piazza Navona in the day, which was a bit more uncomfortable in the heat of the day and not nearly as dramatic as it was during the night. We then headed to the Pantheon again, as when we got there the night before the inside was already closed. The Pantheon is always dramatic but going inside is insane. It’s beautiful and huge. I took some cool pictures of the dramatic beam of light coming from the top hole. After resting there on the pews for a spell, we then headed to find somewhere for lunch. After a few misfires when places we wanted to go were closed, we found a place where we sat outside and had a pizza each and some Peronis. Good times.

Day Walk to the Pantheon

The Hall of Justice

Piazza Navona in the daytime

Return to the Pantheon

Is the Well of Souls hidden there?

A better view tying the spotlight to the ground

This has been around for 2000 years. Flawlessly constructed by the Romans that long ago. Insane.

The entry doors are open for us today

Looking up under the portico

Beautiful, yet hot, Roman day in the Pantheon courtyard

What better way to escape the heat than drinking Peroni

Our satisfying lunch was followed by more walking as we headed past Giolottis again but we did not partake in the gelato this time. We thought at first we would walk to Trevi Fountain and the Spanish Steps again, but as we headed there I happened to look down the street and notice that huge white building with the immense staircase and giant statue in front of it. I can’t remember what it was but I did remember from last time that right behind it is the Campidoglia which is right at the western end of the ancient Roman ruins. We had taken off about halfway through the Forum our first day so this would let us see the rest of it and also give me a chance to see the ruins from the spot I saw them the first time ten years ago. After walking there and also climbing up the large staircase behind, it was really hot so we rested again. Saw some hot guys. But that is easy in Rome. So many hot guys. After some time though, we continued walking on, checking out the sights but not getting back in the Forum as you had to pay again and our Roma pass was used up. We got back to the street and walked back to the Colosseum and it’s Metro stop, which we took back to Termini.

Sometimes it is called “The Typewriter” by the Romans

It’s quite a massive structure, and effectively hides the whole Campidoglio behind it

Of course, in Rome, there are always Gladiators strolling about

As you round the corner of the Vittorio though, you discover…

Michelangelo’s very inclined steps up to the Campidoglio palazzo area

The perspective may not properly indicate it, but there is serious slope here

Hydrating for the journey up

The view from our seat on the steps

If you go a few more steps behind the Campidoglio piazza though, you get to see the other angle on the Roman Forum.

That’s the remnants of the Temple of Saturn behind me, and of course the Colosseum way back there

To head back, we left the Forum area and walked along the modern sidewalk

There’s the Forum, safely tucked away behind its ticket booths

And there’s the Colosseum, just as impressive as always

Seriously, can’t get enough of how distinctive and cool it is

Down in the Roman Metro at the Colosseo stop

Larry, you can’t be tired of my picture taking yet….there’s like 12 more days of it!

At the train station we figured out what tickets we needed to buy to get to the cruise port. Then we headed back to the hotel, where Larry took a siesta and I played a ton of Game Dev Story on my iPad while also looking at our pics. When Larry got up, neither of us really wanted to go back to Trastevere at that point although that’s what we had initially planned. Something closer sounded better so we found Babbos about a few blocks away and had a fantastic dinner nearby. Headed back to the room and got ready for the next phase of the journey, which was to head to the port for our cruise ship fun!