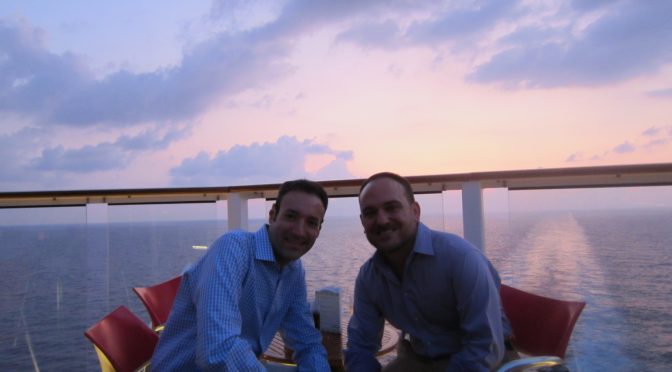 Alright, I’ll do my best now that it’s been over a year, almost a year and a half actually, since this day occurred, but dammit, I would like to finish off these damn pages!  On our first day at sea after leaving Rome/Civitavecchia, it was a chance to really relax, especially after the hectic few days in Rome and the scramble of getting to the cruise terminal.  There was plenty of beautiful scenery to view from the ship as we sailed the Italian coast.  In the morning, after having our first experience at the main dining hall (NOT the main dining room, but the buffet-y type place) for breakfast, we explored the front of the ship.   That’s where we ended up standing and gazing out at the scenery as that was when the Equinox was about to head in the strait between the main landmass of Italy and the island of Sicily.  The biggest city in that area is Messina, which we could kinda see from the ship.  Regardless, it was pretty cool to see freakin’ Sicily!

After that experience there was still quite a bit of day to fill with activities.  Luckily Celebrity does provide quite a few activities – we ended up watching the free glass-blowing show which was admittedly pretty cool, but it’s one of those things that once you’ve seen it, well, you’ve seen it.  We also went to a wine-tasting experience where we ended up meeting a fun couple that we saw sporadically throughout the rest of the cruise.  They were sitting next to us and we could tell they were there just to have fun and drink too.  Yay, drinking!

It was also our first Formal Night, meaning that we wore the suits we’d been schlepping around the world finally!  Of course we found out that again, no one was at our table, so we were all dressed up and apparently we were only impressing ourselves.  Regardless, it was still fun and the food was always good.  Afterwards, we ditched the jacket & tie and retired to the aft outdoor bar, having the chance to drink in the sunset from the stern of the ship and watch the sea drift by.  That was fantastic.  It was exciting to think about where we were and the fact that when we woke up the next day, we’d be in Greece!!!

Taking pics on our first morning from our deck

We couldn’t get a seat near the window in the cafe/buffet, so afterwards we found a spot up front

and lucky for us, it was as we approached the Straits of Messina

It’s the point where the main part of Italy is just separated from the “foot” part of the boot, Sicily

It was a beautiful morning as we slowly approached

It provides a dramatic view forward, just protected from the elements

Larry’s ready to be beamed up

Italy, from our deck

Taking a picture of the door to our room from the deck. I was bored.

We signed up for a wine tasting – what else do you do on a day at sea?

In the Quasar lounge – seriously, it was called Quasar

At our dining table…all by ourselves. No one else at the table showed up. Lame.

Can you believe it???

After our solitary dining experience, we headed to the back for a sunset drink or seven

I kept drinking while Larry had a headache or something

The Sunset Bar in the background while Larry smiles happily

A nice lady happily offered to take our picture here

Eventually it got dark and the ship comes alight under bold, exciting colors

No one at the pool…that night

Back at Sky, now in full-on club lighting mode…again, not many people there

I think our ship’s crowd was mostly old, anti-fun people. Didn’t stop us from having fun though.