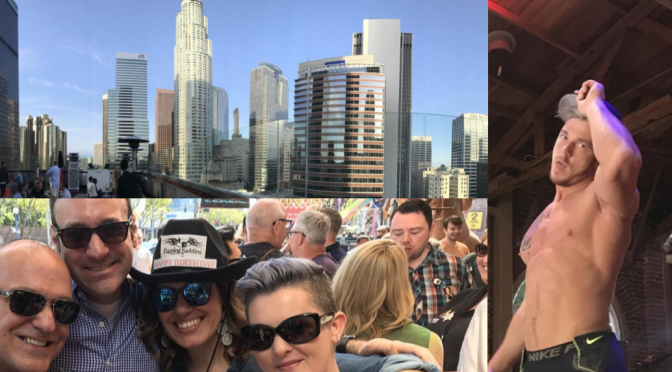 It’s been a rough month or so for me in terms of work. Basically been nonstop in order to try to stay ahead or keep up (it changes, depending on the day), and for quite a few weekends, I would take Saturday off for my sanity but be working from home on Sunday to keep getting shit done.   What have I been doing?  Making myself invaluable in the world of COBOL apparently:

The Inevitable Return of COBOL

Take a gander at that article.  That’s been my life, getting to know the client’s COBOL programs and decipher them into readable pseudocode.  What’s amusing to me is that I honestly might be learning this skill that keeps me gainfully employed; it’s not sexy by any means, but so much still runs on a COBOL backbone and industry is just not really ready to ignore the ol’ adage of “if it ain’t broke, don’t fix it.”

Anyway, the 3-4 weeks of intensity has managed to finally get lessened due to that hard work.  So that’s been great.  It’s still busy during the week of course, but I have been able to take a full weekend both this one and the last.  Yay!

So, what else has been going on?  Let’s go through some of the pictures, shall we?

OH MAN.  So much excitement with Season 3 coming up in like a month.  I have to keep expectations in check, but it’s so exciting to realize we’ll get some answers one way or another so soon.

A few weeks ago, Entertainment Weekly released 3 covers that all had to do with Twin Peaks.  If you lined them all together, you could see they all formed one “last supper”-ish picture of major components of the cast.  When I realized this was happening, I managed to finally get to Barnes & Noble and snag 2 of the 3 covers, but of course the ‘good’ cover was the one I couldn’t find, which was the one with David Lynch, Cooper, Laura and Audrey.  Of course.   I held out one piece of hope though – that Larry’s subscription issue would come with that cover, and happily enough, that turned out to be the case.  All 3 covers were MINE.

I am so freakin’ excited for this.

Here are some more official photos of the covers in their full glory:

In the midst of all my geekery, I went back to Welcome To Twin Peaks and looked at their video links.  One of them was to what has been thus far an amazing analysis series that covers the entirety of the show, and while it leaves a lot of the charming and esoteric details for when watching the show, you can watch this analysis and get a pretty great sense of what has happened in advance of Season 3:

I’d just managed to finish watching through to the recap of winding down from solving the Laura Palmer mystery, and am interested in how it deals with the Windom Earle plot as well as Miss Twin Peaks and the dive into the Black Lodge.  And of course, the frustrating then-“series” finale which is no longer the bane of the show’s existence.  “How’s Annie?”, indeed.

Yeah, so when you make it to one of WeHo’s very festive gay bars, you can rest assured eventually some hot mofo will be dancing around for you to ogle.  And sure enough, a weekend ago, Larry & I got to enjoy that pastime.  Greta was celebrating her birthday and her girlfriend Stacey invited us out to Flaming Saddles, a WeHo outpost of a place we’d also visited in NYC many years back.    Anyway, we had a blast.  After a few pitchers of beer, how could you not have fun?  Drag queens, gays, hot guys dancing around….yeah, you tell me how you can’t have fun.  Well, I can actually tell you the best way to fuck it all up:  add shots.  Larry & I had been drinking $13 pitchers of beer for a while, but of course when it’s a birthday party, people always think you need to add shots.  OOF.  Larry wisely and by necessity passed, but I was like SURE.  Danger, Will Robinson, Danger!  Yeah, I entered the zone of blackout drunk and a 36-hour hangover period.  Day drinking is a fun thing, but it’s not a right.  And you can easily fuck that up if you’re not careful.  Anyway, still a blast, and something I’d love to do again.  Just don’t mix.

If you get the chance to visit some place like Flaming Saddles or the Abbey, I highly recommend it.  What’s not to love?

Work Goes to the Standard Rooftop in DTLA

The new partner overseeing the national practice that I work in came to visit our humble Los Angeles office and meet us.  It was a good day and all of us were in the area so why not have an after-work happy hour atop the Standard Rooftop?  It’s just a block away from where we work, the weather was stunning, and the view was great.

So that brings us to this weekend.  I’m obviously skipping a lot, but I’ll have to make up that differential with some more posts, like movies we’ve seen, etc.  In the meantime, it’s getting close to bed time and today has been a long one, with our Griffith Park run kicking it off and then a lot of work doing laundry, ironing, watching TV, and well, getting mentally prepared for another week.  Le sigh.

Hope all is going well out there for everyone else in this nutso time we live in.