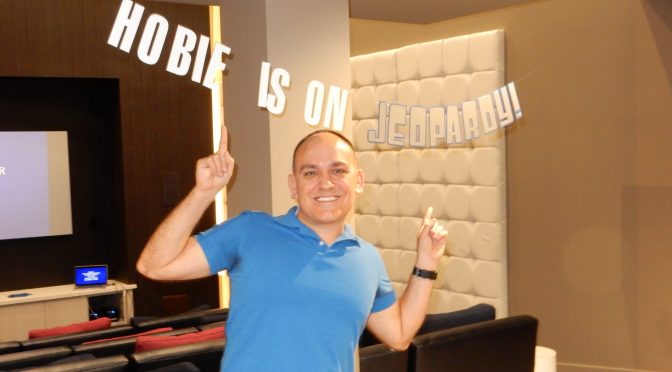 So this means more random stuff about me and Jeopardy!  First up, some pics from the viewing party we threw on Monday night.  Larry went all out with the decorations, and we got El Pollo Loco and plenty of booze to satiate party guests’ ravenous appetites!

Larry’s got puns for days

Larry setting up the theater room

Larry’s a beast with the Cricut

You may have noticed on my episode that I was doing all sorts of shimmying every time I knew an answer and got to ring in….it’s almost too much.  Or maybe it’s endearing, who knows?  Anyway, during one point of the evening, I recreated my shimmy…and my oh-so-young coworkers and guests caught it on video.  🙂

I really think I should have embraced the shimmy, had I known I was doing it, especially when I answered ‘What is Merengue?’

It’s also been fun to find where people commented on the episode online.  There’s a great comments section of the AV Club’s “What’s On Tonight” daily article that uses that location to discuss the previous night’s episode of Jeopardy; I ended up mainly focusing on Twitter though.  Here are some interesting highlights:

Is it me or does Hobie have a little shimmy action going on every time he answers a question?? ?? #Jeopardy @Jeopardy

I think Hobie is high on #jeopardy

had Hobie expressed interest in finding Daily Doubles (as opposed to his opponents), we may have had a different outcome tonight #Jeopardy

Personally, I am a huge fan of those faces I made during that moment!  It cracks me the hell up.

I'm rooting for Hobie. He seems so genuinely nice #jeopardy

I love Hobie … he's so joyful with every answer. I want him to live in my pocket and brighten my day. #jeopardy

Every time #Trebek calls on Hobie to answer in @Jeopardy this is all I can see. #HailCaesar #YoungHanSolo pic.twitter.com/LLc6bD3m9H

I am here for Hobie #jeopardy ??

Love Hobie's please little smile each time he answers. It's so polite…he might be Canadian #jeopardy

Tom’s comment may be the funniest of the night though!

Anyway, thought these various comments were pretty cool to see. I’ve also had a lot of fun chatting up a lot of my fellow contestants that I met that week, including Vicki, who had her show air tonight, as well as Allison from my show, and Ryan, who has his show on Friday.  It’s a cool community to now belong to and quite a unique experience only a very few can understand!  Do stay tuned this week for the last 2 episodes as while we didn’t see them getting taped, I’ve heard from those who were that they’re very good!

Here’s the Jeopardy! Fan’s rundown of the week’s contestants that I was part of:

I was planning to include the j-archive.com rundown of my episode, but it looks like they haven’t gotten to all the episodes from last week yet…stay tuned on that one.

Update, 19 Feb 2017:  I finally looked back at j-archive.com and my episode finally has its rundown!

Oh yeah, there’s also this link to our “Hometown Howdies,” and I’m still not sure where or if these are ever aired?

Update, 30 Dec 2016:  A comment made by my competitor Allison indicated that an installment of The Final Wager was made for our week, in which both Allison and I get a bit of scolding for not betting right.  Well, duh.  At least the scolding comes from a very cute guy.  It’s easier to deal with in that situation.  But of course he’s not wrong about what happened.  Just unfortunately there’s no time machine yet.

Update, 15 Jan 2017:  There’s another site called JBoard that I’ve not really frequented before, but finally heard about this weekend.  Of course there’s discussion about each episode, and mine on Nov 28 had 3 pages of discussion about how bad all of our wagers were.  🙂

Update, 11 Dec 2017:  Larry had uploaded this Youtube but I hadn’t actually tried to see if it would post here: