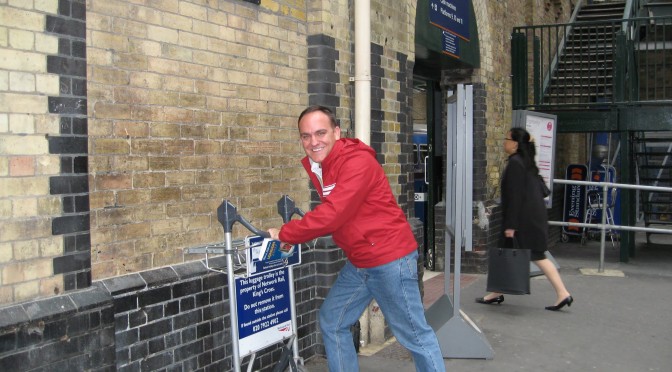 (2014 Note:  These pages are transfers from my original site so I can better view the many pictures I have from that trip and so it’s searchable within WordPress Search. Here’s a link to the original page!)

London – Part Two! As you may recall from the first page of this little travel journal, when we had initially planned this trip, there were lots of incarnations of the itinerary. The trip was always supposed to end back here in London, but there were all various cities that we had planned to also go to. As it turned out though, happily, we only went to Paris and London. Thank God. So before our flight back to the U.S., we had one more day of London, and I think we managed to get a lot of touristy stuff in before our flight the next morning.

Susan was not getting up this morning. That had been decreed the night before, so Jeff and I made plans to enjoy the morning and also plan for the evening, as we decided to see the musical Chicago while here. London has the wonderful TKTS booth like in NYC, where you can pick up tickets to shows for basically half-off, but only for showings that same day/evening. Jeff and I took the tube into the West End area where the tkts booth was, waited in line for about an hour, and finally got 3 tickets to see Chicago that evening. Don’t think that meant we were heading back to the hotel though, as there were other objectives to accomplish!

First: Jeff was bound and determined to find the Coat of Arms museum we had heard about on the Thames River Cruise we had gone on during London – Part One. We had all heard the tour guide motion towards a building that was by a bridge and describe the Coat of Arms museum, a place in which you could go in and find out your ancestry’s coat of arms. That did sound cool, but for Jeff, it became a MUST SEE. Well, after leaving the West End and a necessary cup of coffee (it was actually kind of cold when we got back to London), we began our Snipe Walk around the downtown part of the city near the Thames. We walked all around the area we thought the guide had gestured too, walking out onto bridges to see if we could recreate the view….but all to no avail. I think I had bet Jeff he wouldn’t find it, but I was certainly willing to indulge him in his quest, as I really didn’t have much else to do! Yet we didn’t find it – or actually, once we got back to the states, it turns out we actually did find it, we just didn’t realize it. After we gave up on the quest, we found a cool little bar/restaurant that went underground to refresh. We jumped back on the Tube after lunch and I convinced Jeff to ride on the Central Loop with me, as I was going to go to….

King’s Cross Train Station! Yep – I wanted to go see the legendary entrance to the station where the Hogwarts Express leaves London on its way to Hogwarts (from Harry Potter, duh). It’s kind of a necessary pilgrimage to make if you’re a Harry Potter fan. Jeff wanted to head back to the hotel to meet back up with Susan, but I convinced him that since it was a loop, he could just go the long way! He did that, and I got off at King’s Cross station while he went back to the Hotel Byron to wake Susan up. We planned to reconvene at Harrod’s Department Store later in the afternoon. So I made the pilgrimage, took the requisite pictures at Platform 9 3/4 (that’s pretty cool that the train station actually did that), then decided since I was here, to take Rick Steves’ advice and see the British Library. It is home to one of the first printed Guttenberg bibles as well as some of the oldest versions of the Bible, period. It has a ton of illuminated manuscripts, the Magna Carta, original Beatles lyrics, and a ton of fascinating historical documents. Very cool!

After my little side trips there, I then headed to Harrods, which I had never been inside before. As you may or may not know, it is basically the world’s largest and most ridiculous department store. It’s quite unreal, and also huge huge huge. It was at this point I realized, I have no idea how I’m going to find Susan and Jeff inside here. I didn’t have a cell phone with me, so that option wasn’t there. So after walking around a bit and looking for Jeff or Susan (or their clothes), I decided to camp out at the Pizza place within, figuring they’d look for me somewhere where there is food. I had taken off my red jacket but then realized, you know, I’ve been wearing this damn thing the whole trip, and it kind of sticks out, and right now, that is a good thing. So I ate my $25 pizza slices (seriously – the Pound kills the Dollar in the exchange rate) and waited…and sure enough, they found me! We then wandered around the store for a little while longer, before finally heading back to the hotel to change and then head out to seeÂ Chicago!

So we took the tube into the West End, London’s version of New York’s Broadway, basically. Our seats weren’t the best (basically the back of the balcony section…oh well, what can you expect for really cheap day-of seats!?), but it was still fun to see the show. It is quite different than the movie, in terms of what you’d expect for Set Design and Staging. It’s quite a minimal production – the songs still rock, but I had envisioned that the movie version had lifted the theatrical productions of the songs …. I was wrong. Regardless, it was still a great experience.

We wandered a bit around the West End before finally succumbing to exhaustion and the need to go get some rest at the hotel, as our flight left the next morning. And that next day we promptly checked out in the morning, took the Tube to Victoria station, where we took the Heathrow Express shuttle train back to the airport and made our way back to the states!

It was an exhausting, yet very fun trip, that’s for sure! Obviously, it made an impression as I can still pretty much remember it vividly even almost a year and a half later. Europe with friends is an awesome thing to do, and highly recommended to all of you!!!