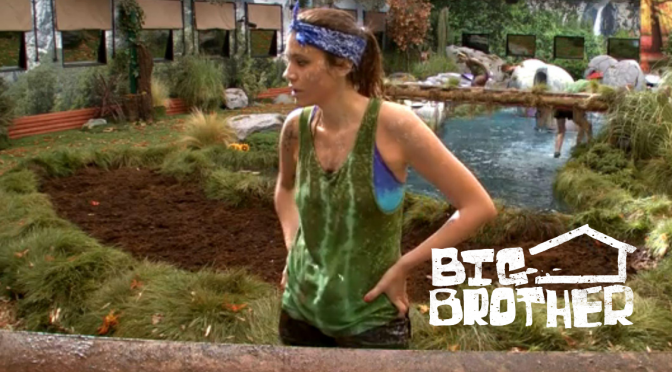 <– Previously, an unsurprising set of nominees are made while a Roadkill winner made a move which just might pay off?

Things were pretty much going as they needed to this week, with the plan to evict Victor via backdooring him not really hitting any snags.  Sure, Victor might get a chance to play Veto but that’s always a risk in this game.  But then Victor lucked into a move in the last episode that just might fucking save him, and it’s staggering how things like that just can happen, as his nomination of Tiffany was pretty much the one move he could make that might benefit him.  Unknowingly, of course! 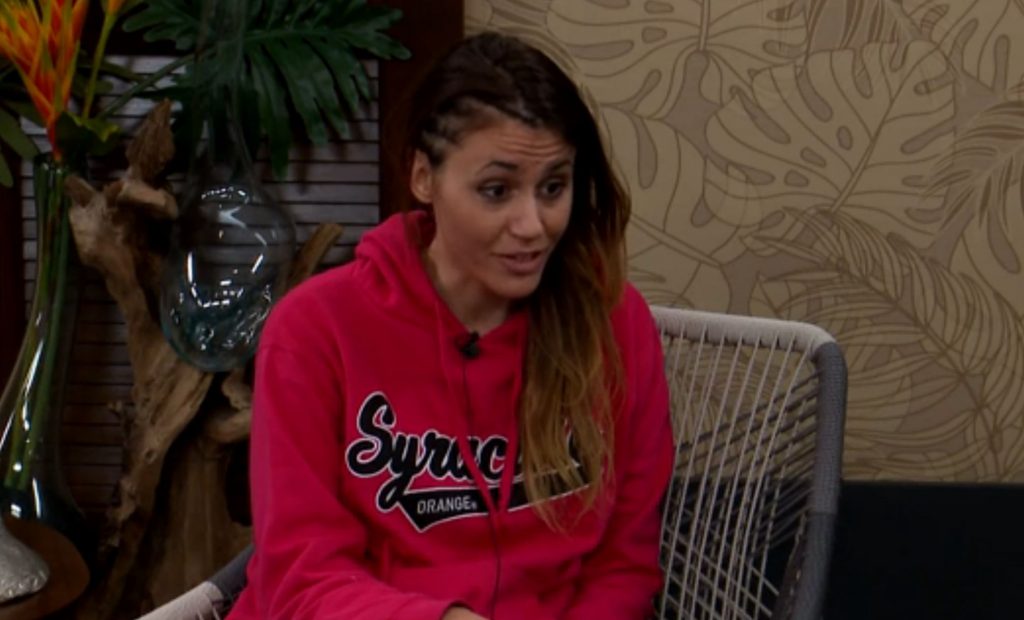 So Victor nominates Tiffany and nobody really knows why, with even his allies asking what the fuck.  Completely random, but guess who doesn’t think so?  Vanessa’s sister, Tiffany!  Change the picture above in your mind – change the hair color to blonde, and you’ve got an EXACT repeat of so many Vanessa conversations from Season 17.  The tears, the paranoia, the certainty that everyone is plotting against her….oh man. 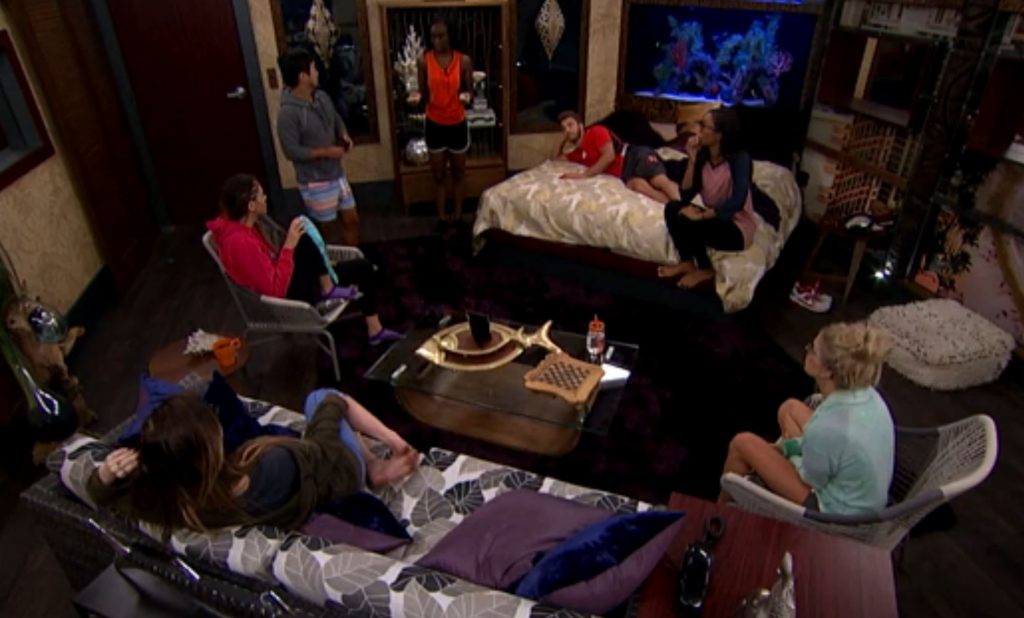 The 8-Pack + Paulie does their best to convince her that all is well and she clearly doesn’t have to worry.  As long as Victor isn’t playing in the Veto, she can throw the competition to pretty much anyone and it’s fine.  Tiffany is the only one who CAN’T come down off the block in order to be able to put Victor up in her place, as she’s the Roadkill nominee, and the HoH doesn’t get to choose that replacement.  Easy enough plan to implement.  But no, Tiffany goes full-Vanessa and assumes it’s a plot to get her out.   Well, self-fulfilling prophecies are a dangerous thing…and DaVonne is in no mood to play with a Vanessa 2.0. 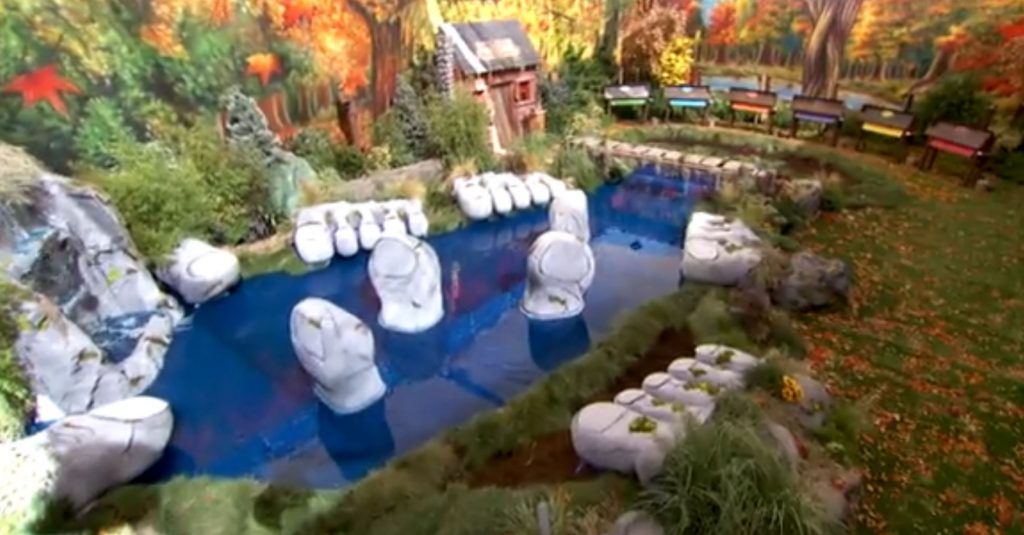 In this season’s outing to test our houseguests’ spelling capabilities, we are treated with giant toes and toenails in a lagoon of funk.  The letters are hidden within the toenails and covered in goop, and everyone has 12 minutes to create the longest and highest-scoring word they can. 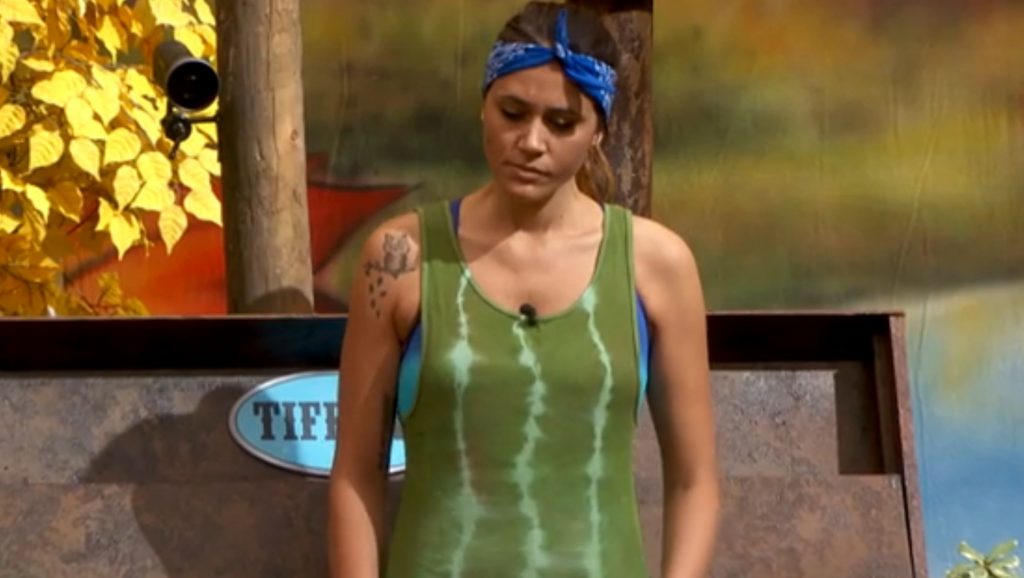 People in the 8-Pack are worried that Tiffany may be a problem, but still giving her a chance to prove that she’s not going off the rails by seeing if she will throw the challenge.  After all, isn’t it too early to turn on your alliance on speculation? 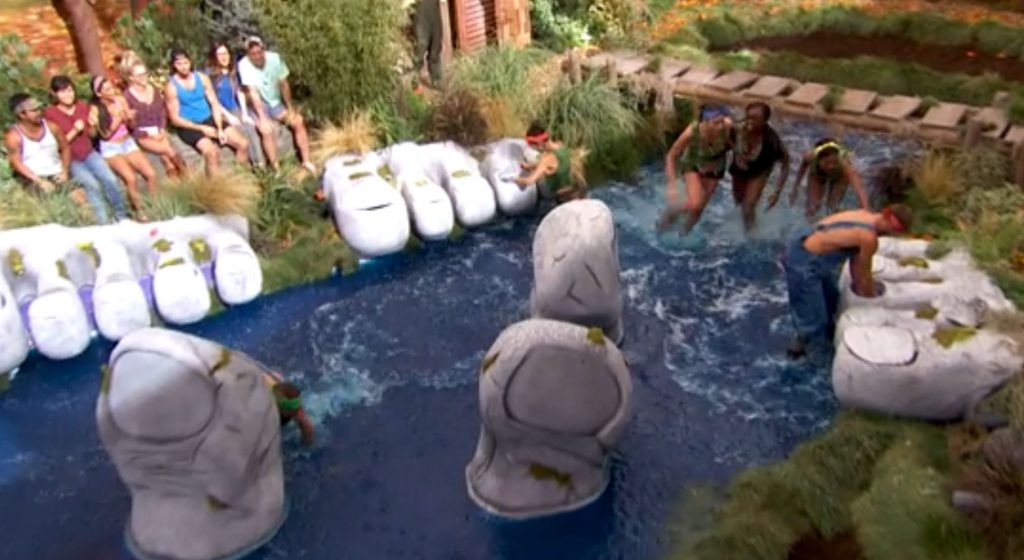 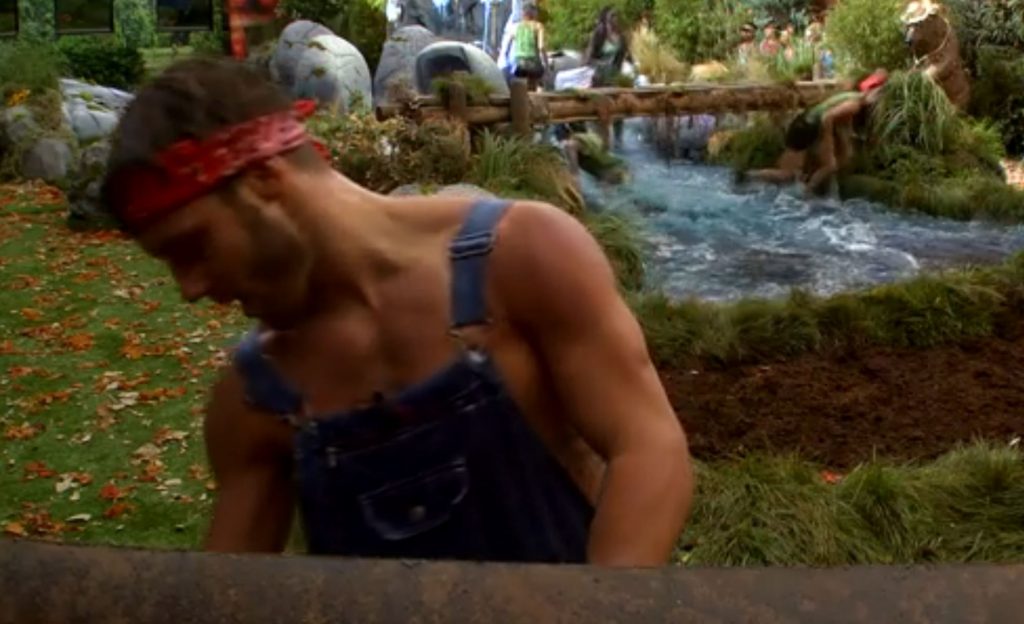 So we get into it, with everyone getting all wet and sweaty looking for letters.  Paulie is especially suited to this task.  Well done, Paulie.  We then get to our first inkling where Tiffany’s gut has led her… 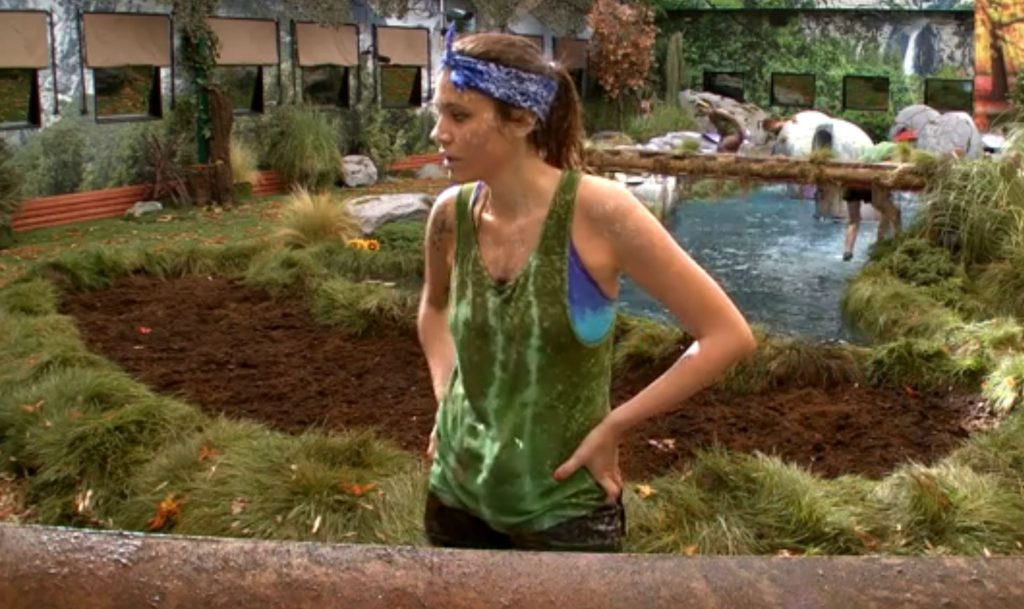 ..as she is completely obvious in her evaluation of DaVonne’s word and decides to go back for more letters.  Oh snap.  DaVonne is quite aware this is happening and knows that Tiffany has decided not to play along with 8-Pack.  The others aren’t aware that’s the case either, until we get to the end of the game and it’s time to find out who spelled what.  How’d they do?

Paul:  SLOUCHED, gets him 9 points. Not too shabby.
Tiffany:  TWINKLING, and now who’s in the lead with 10 points?  Tiffany is!  Guess who is pissed?  All of 8-Pack.  Frank especially…and we get a flashback where Tiffany goes full-Vanessa on him up in the HoH room, so there’s little love lost between these two.  Oh, Tiffany, what are you doing?
DaVonne:  REDEMPTION – a longer word, but not higher scoring at only 9 points.  Some of the letters have 0 value, so you had to be smart about what words to make.
Zakiyah:  DURATION – not in this at all with just 6 points for that.
Bronte:  POWERFUL – a short word too, but this one is 10 points.  With a tie situation, whoever rang in first gets the edge, and Bronte rang in before Tiffany, so Bronte is winning now.  Tiffany tells us she decided to not act too disappointed as her alliance thinks she threw the competition.  Um, no girl, they have no illusions about what you just did! 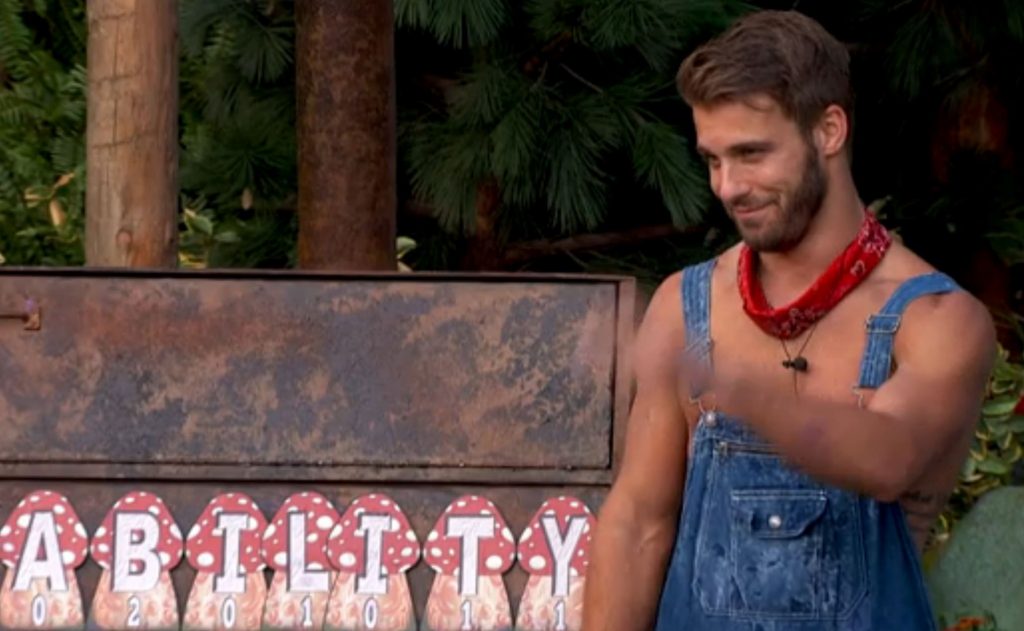 Paulie:  Wrapping up this game is super-hawt Paulie in fucking overalls, no less….and drops a long-ass word, SUSTAINABILITY.  Surprisingly, while super long, it still only scored 10 points.  But he rang in before Bronte, so Paulie grabs the Power of Veto for himself!

At this point, the 8-Pack managed to save the situation without Tiffany’s help, and they know it.  Victor will still be going up, but now everyone in that alliance, as well as the Fatal5, realizes Tiffany can’t be trusted.  DaVonne is hell bent on getting rid of her as to her (and to me), Tiffany is far more of a threat than Victor.  Victor is nothing but obvious when it comes to his strategy, and he’s a known quantity.  Tiffany, like Vanessa before her, is all emotions and strategy, which is a hard combination to believe in.  The hole that Tiffany has dug herself into may not be escapable….and I guess we’ll have to find out tonight. 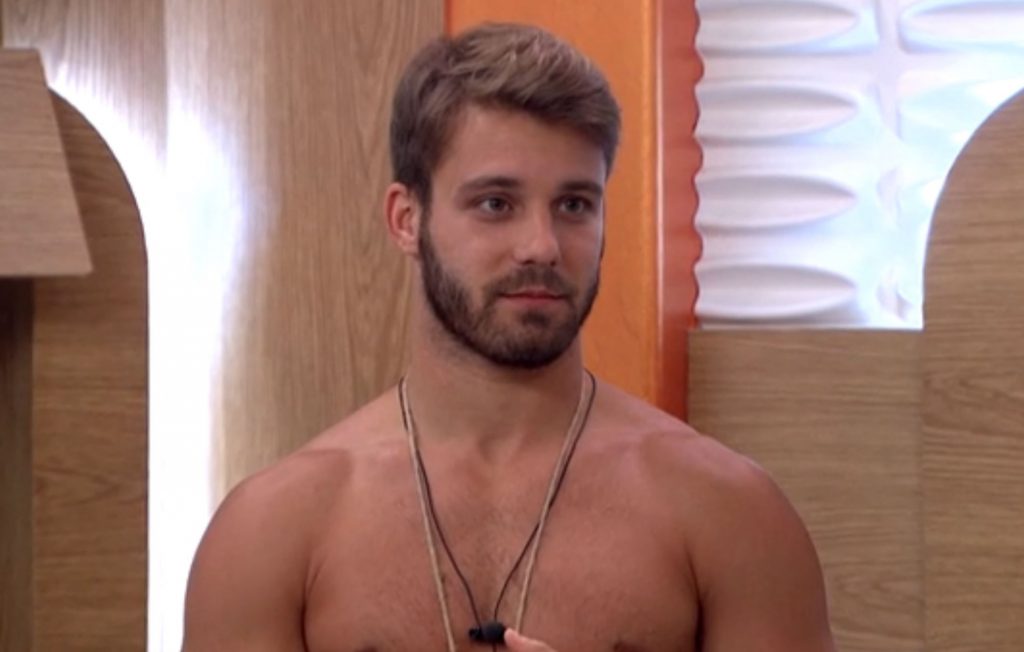 With Paulie in control of this Veto meeting, he gets to ask the nominees to lip sync for their life….Tiffany offers respect for his decision, Bronte says her honesty has been on display so keep her around, and Paul, well, Paul offers his friendship. 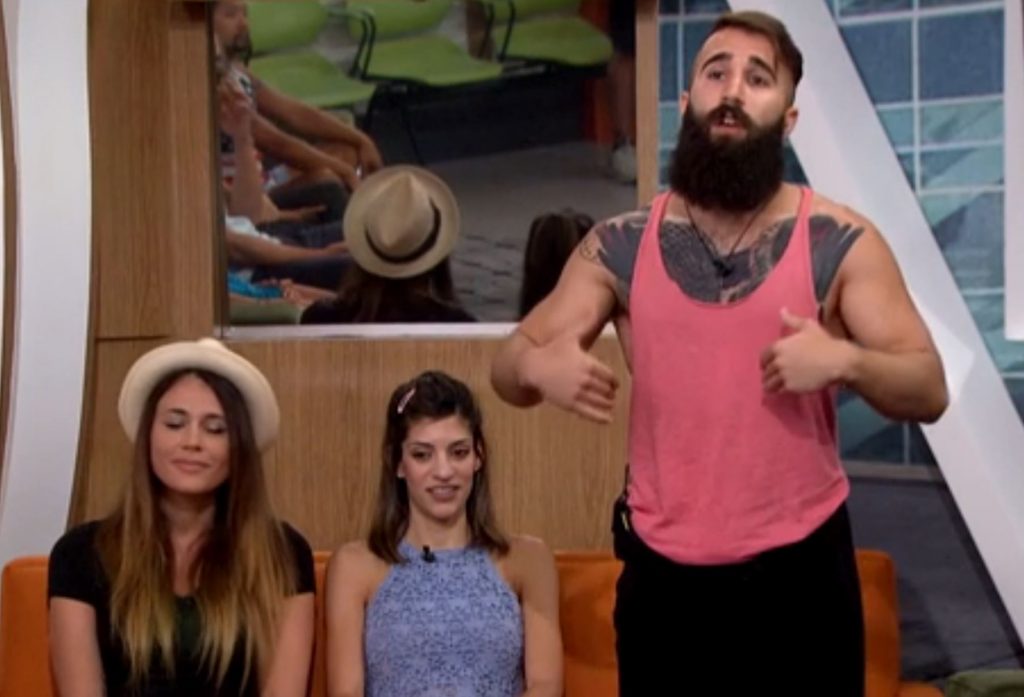 It’s a strange thing to say, but Paul knows full well what his role has been this week, and that’s to be a pawn in order to backdoor Victor.  He’s played his role beautifully, and Paulie rewards him.  It’s nuts though, as Paul has done everything short of shouting from the rooftops to give Victor a warning that this is coming.  But Victor has been stubborn, stupid, or naive about the entire situation… 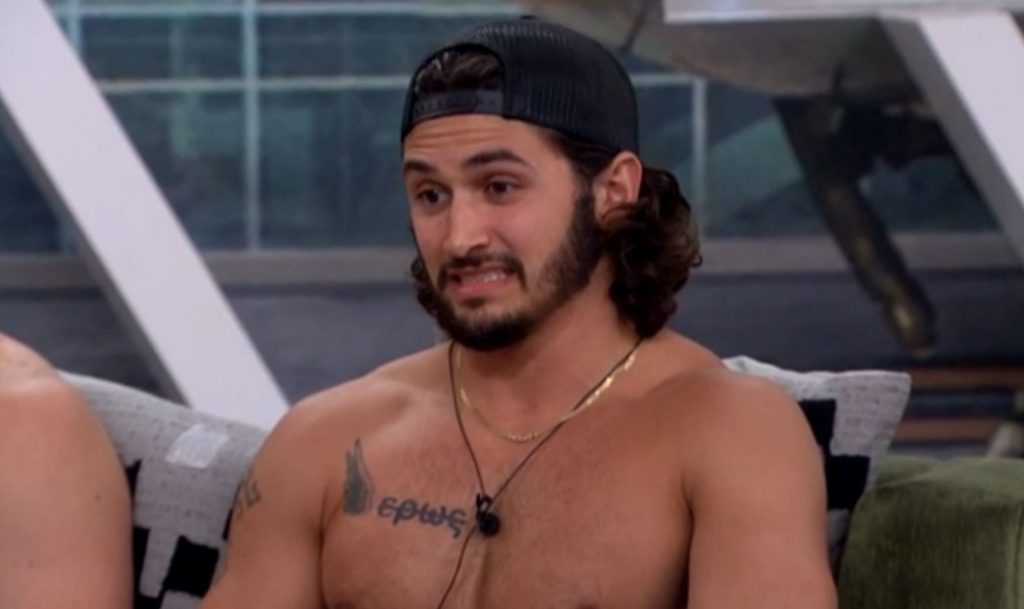 ….as only when Paulie uses the Veto on Paul does Victor start to realize that he’s now in trouble.  Here’s that moment.  And yeah, you’re in trouble, Victor… 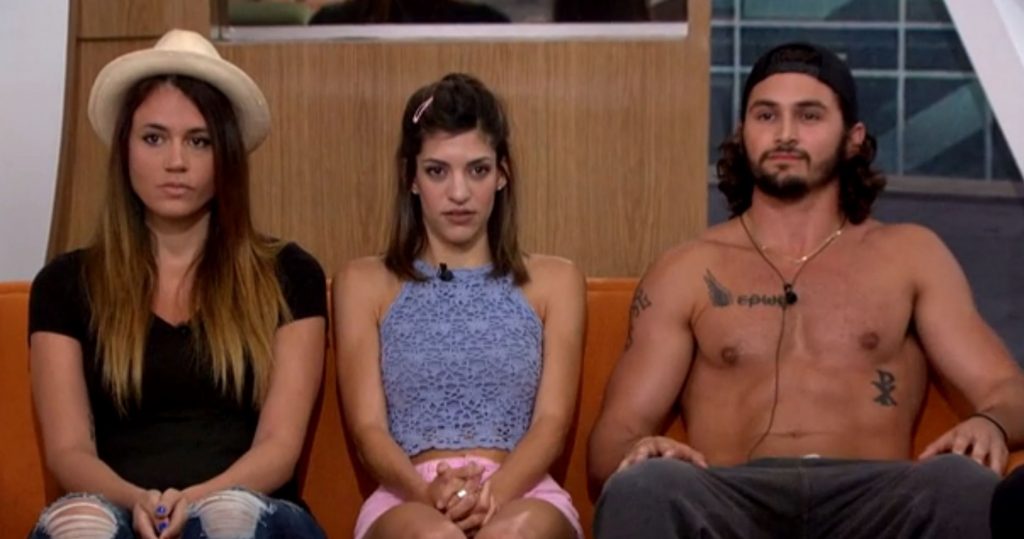 …as Paulie tells Victor that while he forgives him for targeting him last week, he certainly hasn’t forgotten.   I think of the three here, Bronte should feel the safest, as there are two wonderful targets sitting to each side of her.  Victor is a physical threat and one that the girls in the house would be happy to see go, but Tiffany? 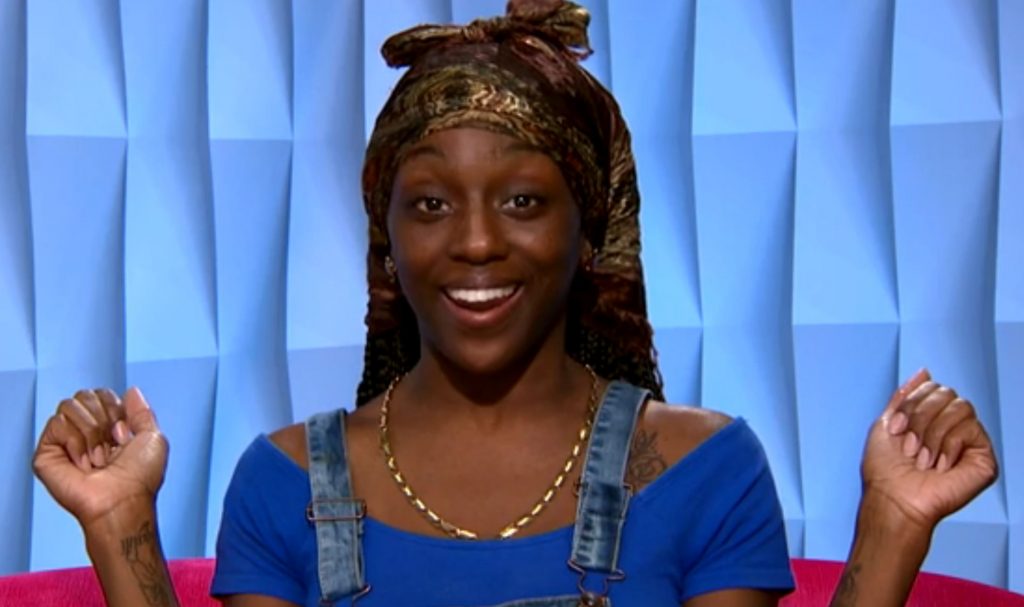 I think we know what DaVonne’s goal is for tonight!  She has had enough of Tiffany’s emotions and is ready to get her out.  Can’t wait to see if she can pull that off…as while that’s good for her and the Fatal5 game, Paulie might get a bit screwed over if Victor stays in the house as Victor pledges to us he’s coming right for Paulie.  We shall see!!! 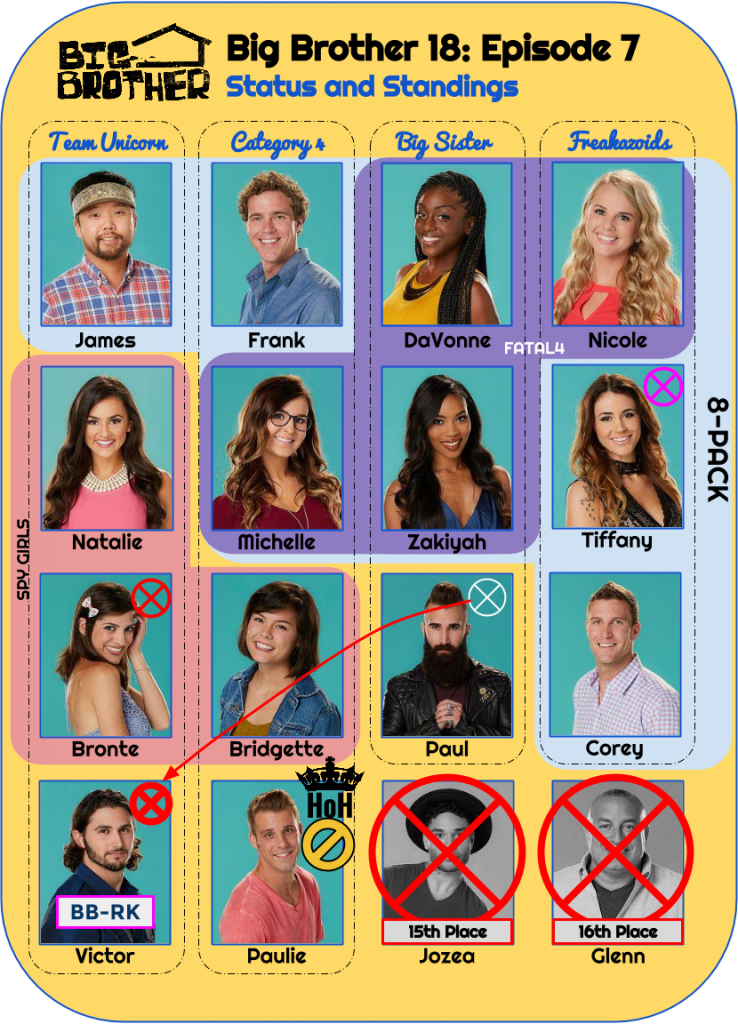 I’m interested to see what happens tonight.  It’s something to write about instead of the pain that’s going on out there in the world that I don’t even know how to write about.

Next, The Conundrum is Resolved, for now –>