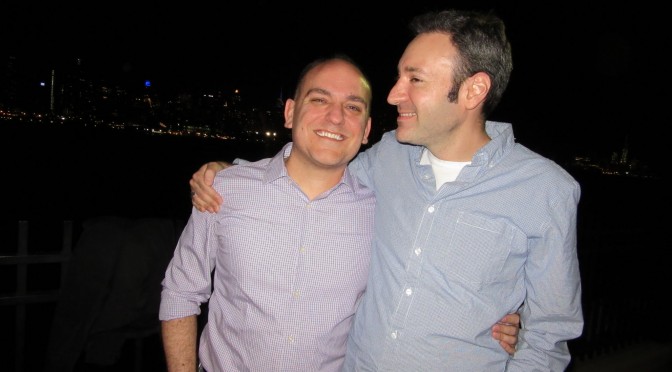 We have a LOT to cover, don’t we?  When I last posted, well, if you didn’t see it on Facebook, then that update may have been a bit of a shock!  Yes, yes, I asked Mr. Larry to marry me, and happily, he gave the right answer.  🙂

So how did this all come about?  Briefly, it was just about time that we did this.  Because it was also coming up on Larry’s 40th, and we were going to be back in the New York area for it, why not make this a really great memorable time?  During the week leading up to our departure (we left Thursday of last week, Larry in the morning, me on the red eye that night) to Newark, I made an appointment at a local jeweler and found the right ring to give.  He had gone for a run to the bike path that afternoon and had no idea I had been late in getting back due to the side trip.  Of course getting the ring is just one thing, figuring out how to do a proposal is another matter entirely.

I’m not a madcap strategist nor an uber-romantic, so some kind of flash mob, Jumb-o-tron, or massive path of flowers was in the cards.  But I did know that I wanted the skyline of New York involved, so I moved forward on that.  We were having dinner on Friday night at the River Palm for Larry’s birthday, along with Fran & Joel and Alyssa & Jon.  I wanted everyone to come along though, and while I figured I could somehow convince Fran & Joel to go along with my fake story, I wasn’t sure Alyssa & Jon would.  So I told Alyssa what I was up to in order to make sure she’d come along while also sanity-checking if it would work in the first place.  She gave her thumbs up and so once I was in Newark after a horribly exhausting red-eye flight, I started dropping small hints about wanting to go back to the area where I used to live in West New York as it had the BEST view of Manhattan.  It really does.

After a wonderful dinner, the time came to see if my motive of wanting to see the city on a beautiful night from the West New York vantage point would work.  And happily enough, everyone was in!  It actually was a very very nice day unlike what ended up following the rest of the week.  So off we went to my old apartment area on Riverwalk Place and when we got to the shore, there was a nice clear area of the path in front of us.  I had Jon take a picture of me and Larry (which you can see leading off the pics below) and after that first pic, I got one my knee and asked Larry if he’d marry me.  I think I said some other things, but I honestly can’t remember the details.  The important thing was he did say yes.   🙂

A Cuban restaurant/club has opened in the area since I moved and it ended up being where we sat down for a celebratory bottle of champagne.  It was a great night and went pretty much according to plan.  Here are plenty of pictures:

First starting with the dinner at the River Palm, where we celebrated both Larry’s 40th and Fran’s 65th birthdays:

Had to grab a picture of this lighting

The picture right before popping the question – see the knowledge in my eyes!

We got a kindly person to get our photo

New York Views (taken by me and Jon)