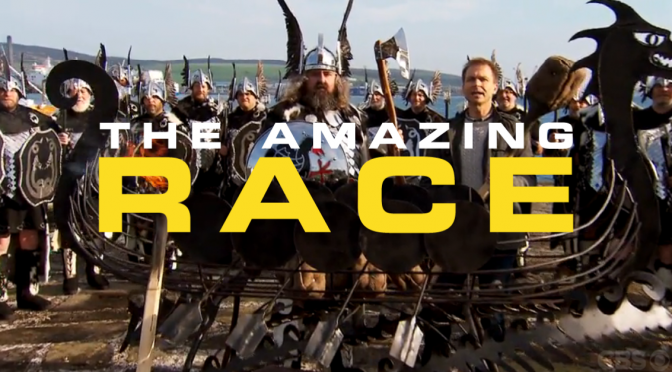 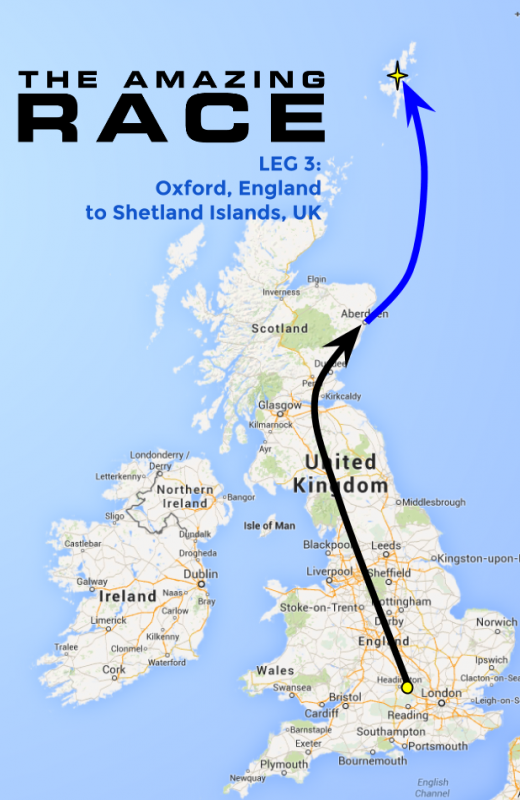 I need to get this out there right now: where the hell are the Roadblocks this season? Â We had just the one in the first leg and it was brutal (the buried treasure one with the reverse compass) but I do believe you need to still have them throughout the other legs, right? Â Misti & Jim may indeed have no problem getting through this race if they never have to depend solely on Misti. Â I figure that there were unforeseen issues that had to be worked around and that’s why we’re getting a lot of regular “task” challenges, but the Roadblock has actually been a compelling feature of the race so to see it MIA for 2 legs is disconcerting. Â Alright, I’ll stop my rambling…on to the recap!

The teams all had to make their way first to the local train station in order to ride the rails to Aberdeen, Scotland. Â I didn’t have any concept of where they were headed until I generated the map above – I kept thinking Aberdeen was on the west coast of Scotland. Â That’s a long train ride! Â The biggest thing out of this act of the episode was Scott’s disastrous ankle sprain – yeesh! Â I’m not even sure what he did except possibly just land on his foot wrong while walking. Â We’ve all been there, but talk about worst possible timing. Â It wasn’t until the whole group of racers (it was an unfortunate bunching of teams again due to the train not leaving until the morning) were on the ferry from Aberdeen to the Shetland Islands when we saw Scott’s ankle: 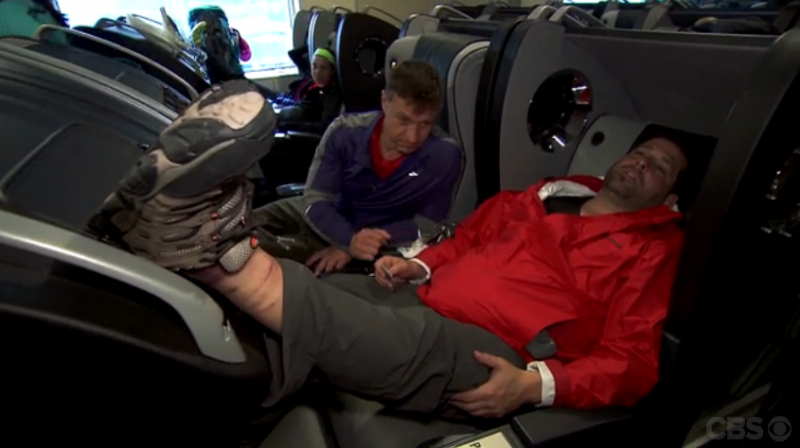 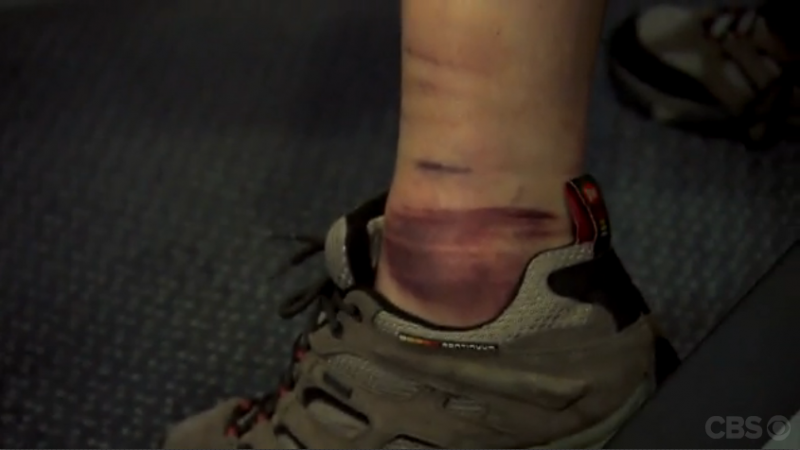 So these two were now going to have to overcome this challenge as Scott wasn’t able to do anything but walk. Â He must have been in agony.

The Shetland Islands Welcome You 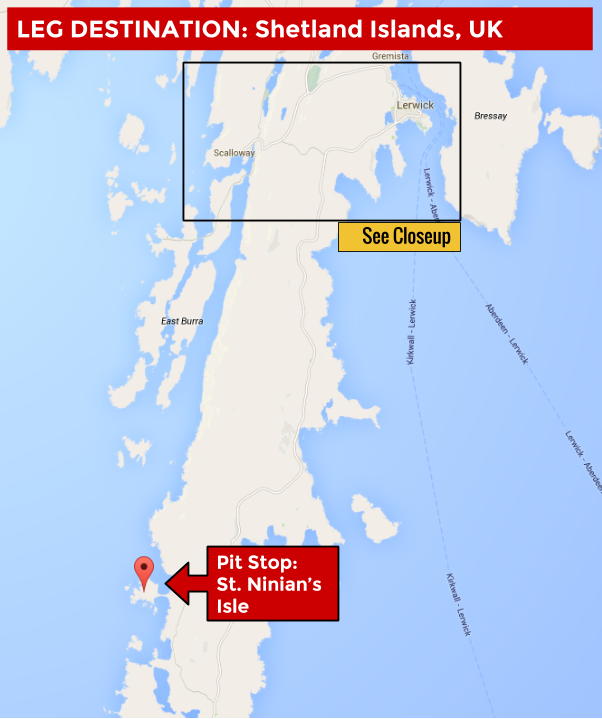 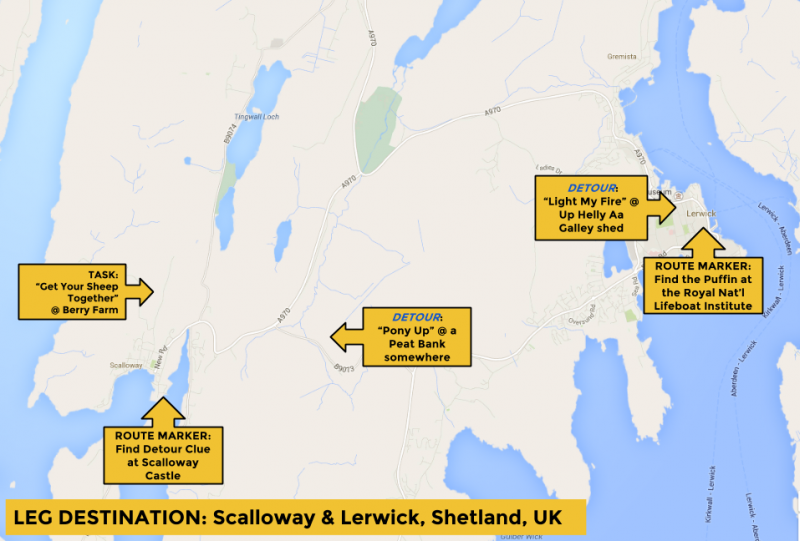 I also had no clue where the Shetland Islands were located until making this map. Â I had no idea there were islands way the hell up there north of the main UK landmass. Â The More You Know!

After finding the Puffin at the Royal National Lifeboat Institute in the town of Lerwick on Shetland, they were directed to the other side of the island to Scalloway Castle. Â There was some creepy shit Â there but that wasn’t where any of the challenges were, although that could have been interesting. Â Instead, they get their Detour clue!

The Detour: Pony Up vs. Light My Fire 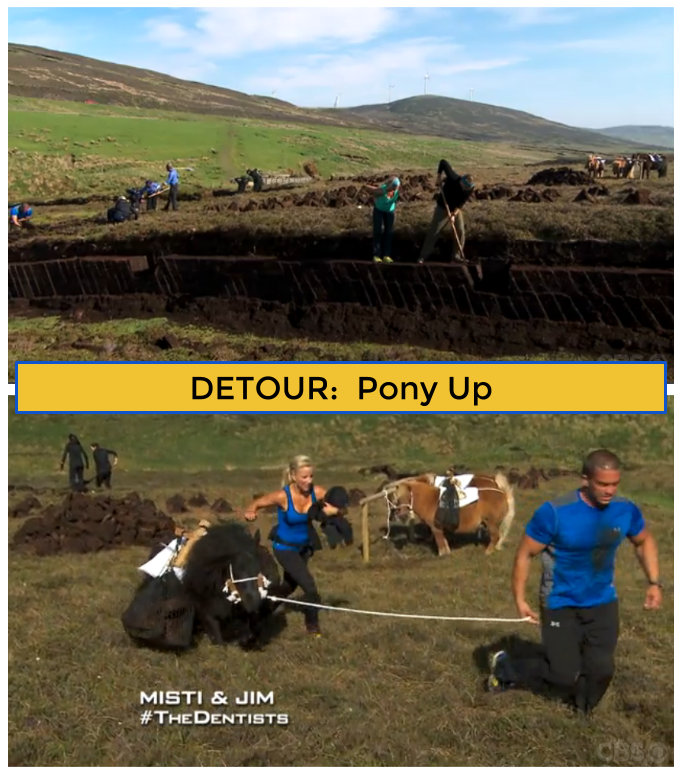 I had to laugh at some of the problems people had during this challenge, as I probably would have had the exact same ones. Â When Amy & Maya made the challenge harder by not realizing there were pre-cut lines in the peat? Â Yeah, I could see me fucking that up. Â When trying to get your adorable Shetland pony to do your bidding and being surprised that it is a donkey at heart? Â Yeah, I’d have slightly panicked at this little cute pony suddenly hopping all over. Â I have to give Misti & Jim credit for knocking this challenge out like pros. Â He’s talking a big game but this leg shows he’s able to back his words up. Â  I’m just wanting some Roadblocks so that Misti feels some pressure. 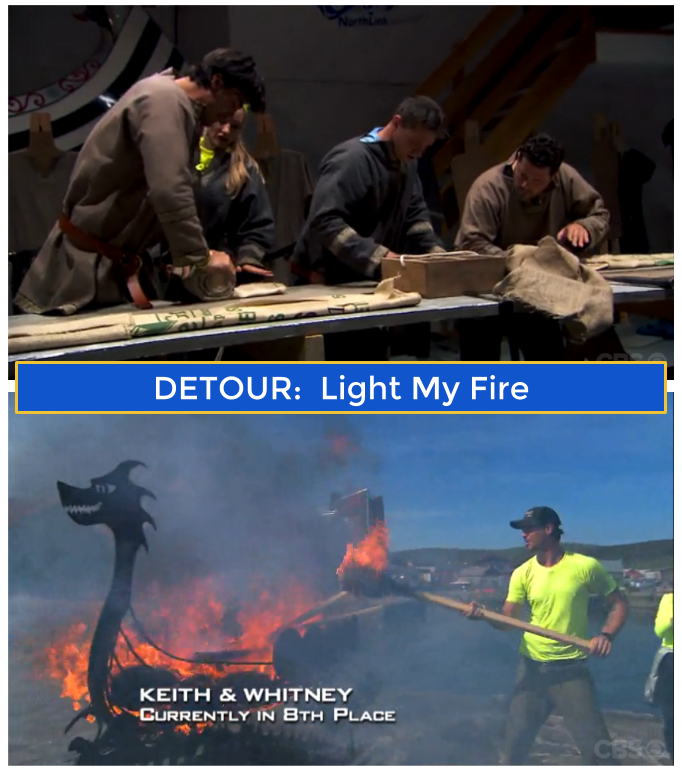 The Light My Fire challenge apparently was harder than it looked, as if you chose this Detour option, you basically ended up in the back of the pack heading into the last challenge with the sheep. Â Brooke & Robbie had an especially rough time of things, didn’t they? Â They didn’t mean to go to this Detour option and kept having problems the whole way through, eventually hitting last place. Â Lucky for them, other people ended up having even more problems in the last task. Â Here are some Vikings for you before we delve into Sheepland: 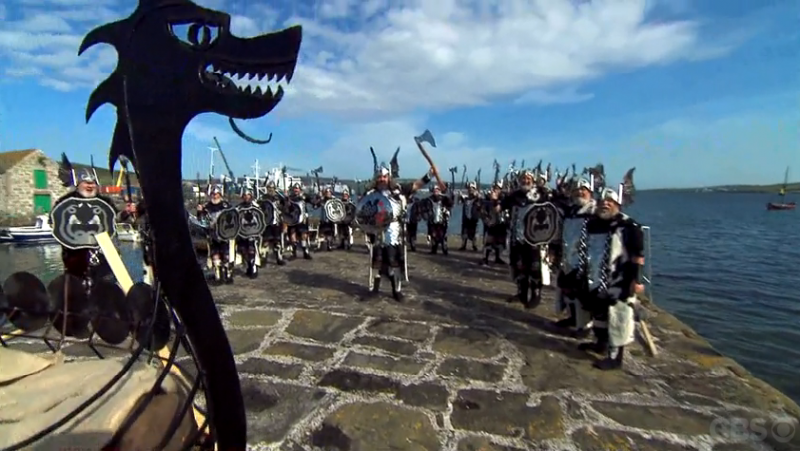 GetÂ Your Sheep Together!

The adorable herding dogs and the bouncing sheep made this challenge completely charming to watch. Â Probably having to do it would have made anyone go nuts. Â Those sheep were particularly skittish and jumpy, and chasing them ended up being always the wrong thing to do. Â 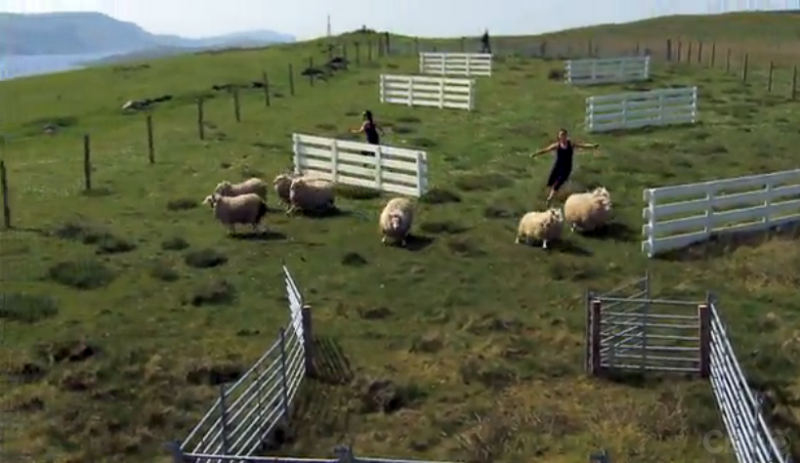 So when the racers actually realized if you calmly walked on the edges of the pen and kept things kind of calm, the sheep naturally would walk down the path as a group and head into the pen almost by themselves. 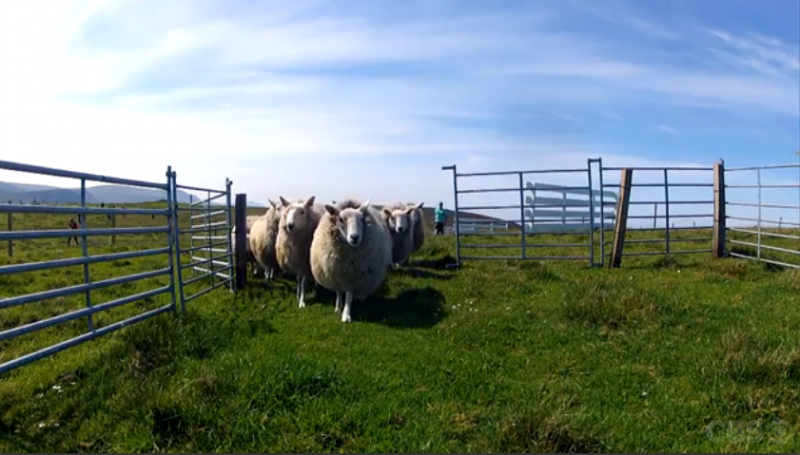 Â Yet once you freaked out one of them, the whole group would take off! Â It was adorable for us and entertaining, but I’m sure infuriating to the racers. Â  The racers mostly did a good job of leaving in the order they came in, but two teams made some televised mistakes when heading towards the Pit Stop, although only one of them paid a dear price: 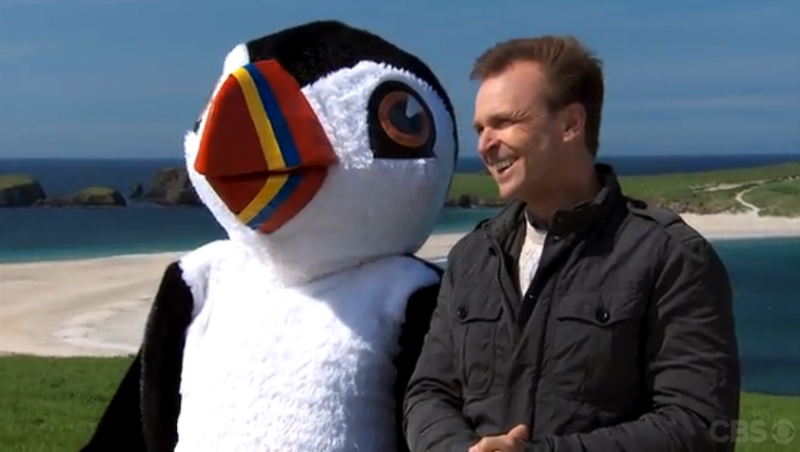 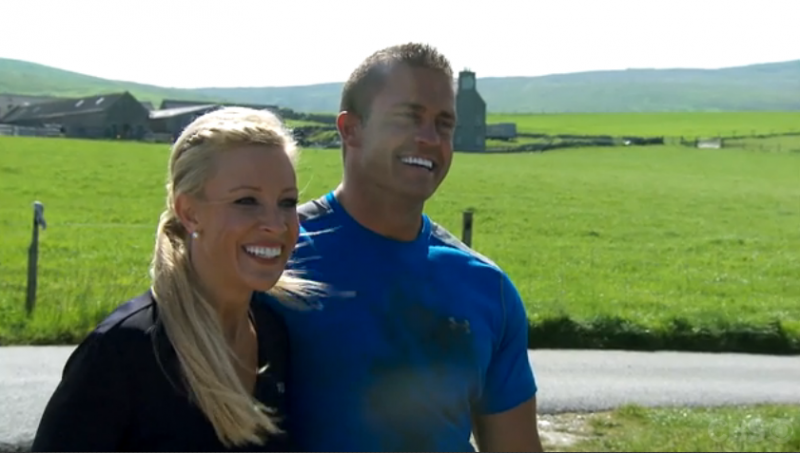 Anyway, Misti & Jim increase their win-count with this second win. Â He’s very close (and I mean VERY close) to being utterly obnoxious about his desire to be the most accomplished team ever on the race. Â I’ll let you know if he passes that threshold next time. 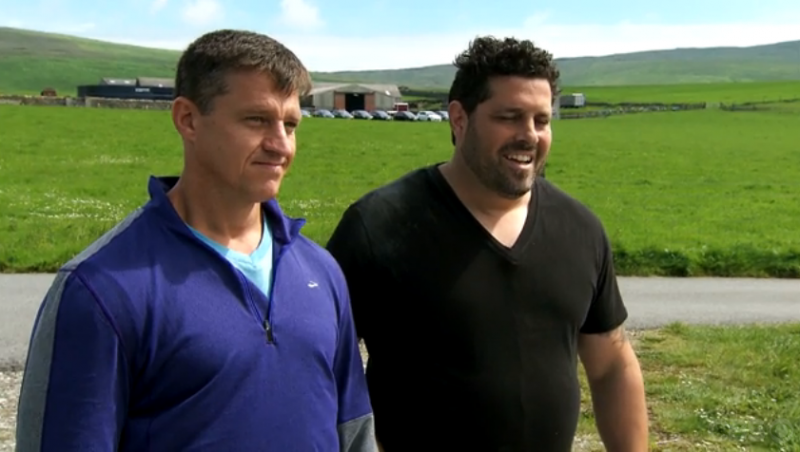 Over on the losing side, Michael & Scott’s terrible directions seal their fate. Â It’s probably for the best that they’re gone – his ankle was only going to guarantee that they were a guaranteed soon elimination. Â I wager that even if this had been a non-elimination leg, the producers would have changed that to just get them out while they can. Â You don’t need a wounded team stumbling around and likely aggravating their injury even more. Â So farewell, Michael & Scott! Â Get well! 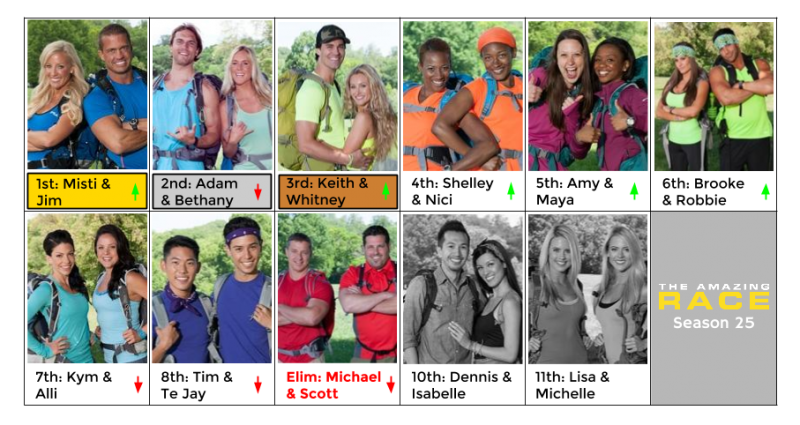