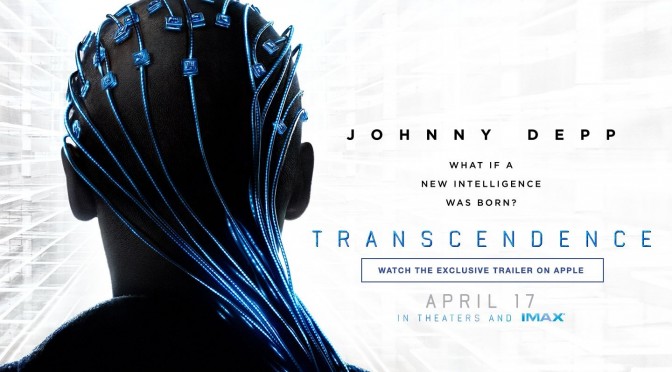 A group of us went to see Transcendence yesterday in IMAX.  If you’ve looked on Rotten Tomatoes, you’ll see that it’s getting pummeled by the reviews, with a 19% “fresh” rating as of today.  It earned that cumulative result.  It’s a very silly movie with a decent premise but ends up going nowhere and is pretty shabbily thrown together.

If you want to see it for yourself, you should probably not read any further, as I’m willingly going to discuss stupid plot points further on.  First, the good:  I really did like the “concept” of the movie.  Well, at least, the concept of the movie as I wanted to it to be, in that it would tackle the idea of futurism and the idea of technology and how humanity could possibly integrate with it to the next level.  And to some degree, this movie does explore that a little, and there are some fascinating looks at how this consciousness decides to keep improving itself through nanotechnology, as well as fantastical applications of that technology for humanity. It’s also a movie with a lot of gorgeous visuals.  That’s about all the nice things I’ve got to say. 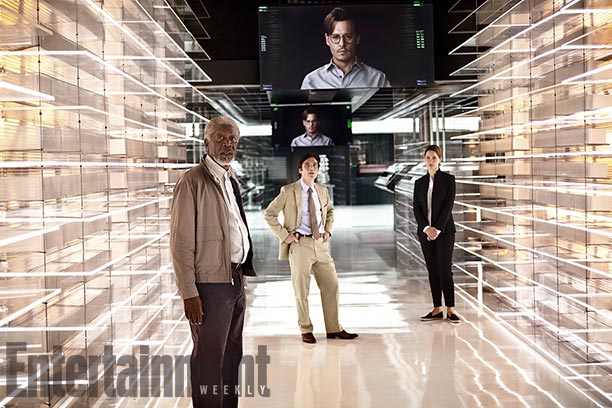 The bad / ludicrous / silliness / hackiness:  everything else.  For me, the movie is just seriously shitty.  There’s no emotional core, or some semblance of a story you actually care about.  They try to force in this love story between Johnny Depp and his wife, but there’s no semblance of a real relationship there that was believable.  So I couldn’t care less about if they get reunited after Depp is “transcended” into the digital world.

Then there’s this whole element of Depp’s avatar getting to be far too powerful (and possibly malevolent) of a presence;  he is after all not only healing those who are broken, but also turning them into an “army” of androids that are becoming superhuman and completely under his control due to the nanotechnology he’s implanted them with.  The groups that oppose him and his growth are naturally afraid of this and take steps to neutralize him.  Even his wife gets quite concerned and ultimately afraid of what he’s becoming.  She ends up meeting with the rebel group and willingly becomes a vessel for a virus (because of course – ID4 showed us there’s always a virus that can do this) that will counteract the Deppness.  After getting mortally wounded by the rebels (talk about friendly fire – thanks, guys!) in a barrage of rocketfire when meeting up with the newly-reconstructed-as-a-human Deppness to get uploaded into the world with him (just go with it) and deliver the virus, she finally realizes that all along, Depp wasn’t to be feared and he was really just trying to help everyone.  Uh, what?  That was not shown to be the case at all in the movie when he started responding with violence after the first few rebel assaults.  But once he interacts with her and contracts the virus, oh, of course, it’s shown that all the nanobots were doing to the humans (because the nanobots are able to travel in swarms – totally harmless, right?) was just holding them down because once the virus kicks in, everyone’s released from their nanobot hold.  WHAT?  Then wifey feels bad about doing this and they die together.  OR DO THEY?

Ugh.  Oh yeah, the movie has the conceit of starting 5 years in the future after the whole world has been robbed of electricity due to what we assume is Depp’s destruction – which was to me a needless plot device to implement.  Knowing that happens completely removes any urgency from the movie itself.  Then when we finally catch up to that moment, one of the characters finds a pool of water in a leaf at Depp’s old house – and there are nanobots in it!  So fucking what.  What does this all mean?  It’s pointless.  Depp and MrsDepp somehow made it back as nanobots and are living some digital existence in leafwater?  Powered by what?  Especially since we kept getting told that Deppness would need more and more power just to survive and exist, and we see the endless solar panel farm he and Deppwife construct out in Bumfuck, CA in order to meet that need.

Okay, if I remember anything else or if Larry reminds me of something, I’ll add it here.  I think I’ve managed to sleep it out of my system.

Honestly, I appreciate that a movie tackling this subject will be a difficult one to make.  It seems a better-edited and more entertaining movie could be made from the stuff they filmed.  Really though, a better-written and more interesting cast probably would help too – it takes itself far too seriously for you to really enjoy it.  It’s a little cliche to have some wise-ass sidekick somewhere, but this film could definitely have used an audience surrogate in here.  Too much is assumed as well in the technological jumps made – we don’t get a good movie explanation of nanobots except that they’re magic; seriously.  What CAN’T nanobots do?

Ultimately, I just can’t recommend anyone see this movie.  It’s a pointless, meaningless movie.  After watching it, you really don’t have any idea of what was being said:  Is super-nanotechnology a good thing or a bad thing?   Did the Deppness’ ultimate “goodness” come from him or was it his wife?  Would a terrible person cause something else entirely?  Are nanobots magic?

I’d recommend you just watch The Matrix again.  Hell, I’d say even Her was possibly a better way to look at the future and Intelligence than this, and you know I wasn’t a big fan of that movie at all.  Larry pointed out that Invasion of the Body Snatchers was a clear reference too, and I agree, so go watch that 1970s version and get creeped the fuck out, as that’s one helluva scary movie that does actually have meaningful subtext too.  Bookwise, anything by Ray Kurzweil is a great way to learn about futurism – I’ve read his “Age of Intelligent Machines” and it’s fascinating.