That was pretty much the only fun had this week. Making a snow angel on the balcony outside my window when it snowed here in NYC on Friday. Otherwise…?

So where can I begin with the Shitty Shit Shitstorm that has been my life for the last week or so? I guess I’ll save the pics for the end as like I said above, that was really the only fun part of the week so why not save the best for last, right?

So first – last Thursday was Feb 14th, or what most of you may call Valentine’s Day. It had potential to be a great one. It didn’t. The guy I was sorta seeing flaked out and I realized that this was going to be basically the way of things to come. So I ended that. I’d rather be alone (and unhappy) than alone and foolishly waiting. It actually felt nice to get closure on that but seriously, it was a bummer. I liked him a lot but throughout the week I realized this was really the only way forward…and with what happened a week later, well, I’ll get to that.

Then I was on-call for work during the last weekend, as I mentioned in my last post. That’s fine and that’s to be expected. It sucked because I basically had to cancel all my plans for the weekend and stay local. And of course there were calls, but I learned plenty during those. I thought I might have gotten away from having any further calls past the Friday evening…but on Monday morning as I struggled to wake up, I got another two-hour call. Glad I didn’t go out on Sunday night as I had planned or there’s no way I could have dealt with that.

Monday night rolls around and I get a call from home: Mom’s in the hospital since Saturday. That’s a bit of a shock, to put it lightly. I will admit being upset at not only the news but also at the timing of receiving the news, but that’s neither here nor there. I understand why, and basically at this point, I just want to know what’s going on. As some of you have been keeping track with me on what’s been going on, Mom is now at home and was released from the hospital a few days back. I’ll give her privacy on this site with respect to what is wrong, but she is at home for a while and has a steady road to recovery ahead of her. I know she’s impatient to get well and I know that’s where I also get that impatience from, so I can relate to her mindset. I just want her to know that I know she’s a fighter but she has to take it easy and take things slow. She knows this but it’s driving her crazy. Tough. Get better, and take your time. There’s no rush. Needless to say though, this has been heavy on my mind the past week, especially when we really didn’t know what was going on.

And then the crappy piece de resistance for the week? On Thursday, my boss comes in to my office, shuts the door, and tells me that the guy who has been my mentor and a good friend at work no longer works at NBC. My jaw nearly hit the floor. I didn’t even get to say goodbye as he was escorted from the building. And not only that shock, but now I get all the responsibility of his admittedly big project which I had been helping on but nowhere near guiding it. And now it’s all mine…with no turnover. So Thursday afternoon was a bit of a stressful day. I’ve been quickly/slowly getting up to speed on trying to get a handle on my responsibilities now as they’ve effectively doubled…and while I know I can do it, seriously, this has been a trying week.

Work… Family…. Personal Life…. all have basically decided to say Fuck You, Hobie. I know, I know, the family thing isn’t all about me so who the hell do I think I am complaining about it…but it weighs on my mind because I hate being so far away and being unable to do anything. Hell, I don’t know if there’s anything I could do even if I was there. But 3000 miles of distance makes things hard regardless. And then work crumbling in front of me means there’s a big part that used to be consistent and is no longer. And finally, the dearth of a personal life also just adds to the fact that February has been crappy.

So I take the happy parts when I can get them. Take yesterday. It snowed over Thursday night and into Friday morning. It was beautiful, actually. I dreaded the commute into work, but enjoyably, it went faster than ever because many many people were calling it a ‘work from home’ day. I threw on my boots (brand new from the military when CMAFS went and bought new boots for everybody – including me – and so I stowed them away when I got them knowing I’d just use them when I became a civilian – and sure enough this was a beautiful day to break them out) and jeans and got to work almost effortlessly as I could just trudge through the deepest snow drift or puddle and not care as those boots are awesome. Then when I got to work I saw that the balcony was pristine and I wanted some pics of the cool cityscape outside in the snow. So I dragged Arielle and Dan out there and while out there, the idea to make a snow angel came to me. After a few seconds of contemplation, I was down on the ground angel-ing away. And that helped to end a shitty week on a good note. Busy as hell at work still, but I know I’ll be able to handle it. Mom will get better. And my personal life will one day click into place. I just know I can’t force it.

Anyways, here’s pics from Friday’s snowstorm and my Rock Center view of it all. 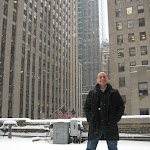 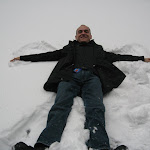 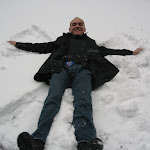 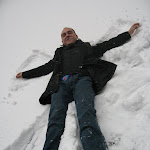 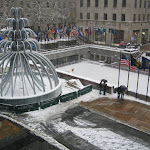 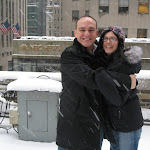 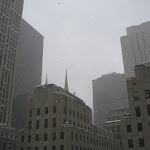 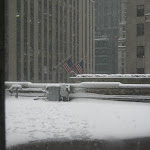 Oh yeah, I also got a call from Connie right after the snow angel fun! How crazy, random and awesome was that!? She wanted me to get Enrique Iglesias’ autograph because he was on the Today show….in Miami. Poor Connie.

And Robbie updated his website. For the first time this year and technically the second time in A year. Will wonders never cease?

And if you’ve been missing it, there’s been loads of TV discussion in the Shooting Gallery. Jen, are you watching Big Brother 9 or not????? I KNOW you have time to drop some comments.

And yes, I basically sheared off all my hair. Got tired of looking like the guy who has a combover and who just needs to cut the hair short. Hence what you see above.