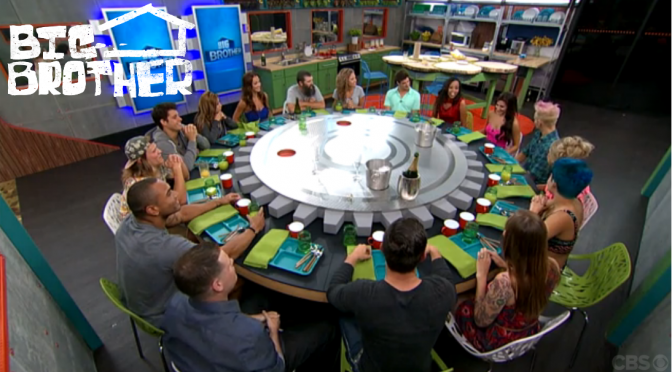 Okay, so I trust that there isn’t a proper intro theme song yet just because we hadn’t actually met all the houseguests at this point, BUT THERE HAD BETTER BE THE BIG BROTHER THEME MUSIC AND SPINNING CUBE ON THE NEXT EPISODE OR SO HELP ME!!!!

Whew, glad that’s out of my system!

Like yesterday’s post about the first episode, let’s do some quick intros in an organized style….but first:

Thanks again to Big Brother for providing us some prime Grade-A scenery to gawk at.  I just wish that he wasn’t such an asshole, at least based on the info I’d read about his mindsets earlier.  I’m willing to give Caleb the benefit of the doubt at this point, as there’s always a chance the stuff that was published was somehow taken out of context.  I’m honestly very confused about it as you see him being cocky about his capabilities so you think perhaps he’s going to launch into a tirade, but then you see Frankie getting a piggy-back ride on Caleb’s strong back.  Is Caleb playing possum?  Being savvy enough to know you can’t get all ugly without at least having some protection? We’ll see.  You’re on notice, Caleb.

Now that our two contestants have been introduced, I’ve determined that each episode will also have my own competition, which is, Who Was Hotter – Caleb or Cody?  It’s going to be very scientific.  Stay tuned for the next recap as Cody didn’t get much screentime at all as this was all about Caleb’s introduction.  Anyway, on to the other contestants!

A sassy and egotistic J.A.P. from Miami – plenty of confidence to go around in this one!  She immediately bonded with Frankie over their shared Florida origins and personality traits, but her poor challenge performance may lead to Frankie ditching her soon enough.

You’ve all read my initial impressions on Caleb above, but besides the hatelust for him, he seriously comes across as a no-holds-barred player.  PowPow (ugh, that name…) was immediately trying to figure him out; I think he’s likely to be the center of some alliance, especially now that he’s the 2nd HoH.

A newly-single mother of 3, she’s gorgeous but not arrogant about it.  She’s been pretty quiet thus far but I noticed that Derrick has seemed to form a subtle bond with her over their shared status as young parents.  More to come with her, I’m sure.

The hipster-y barista who comes across as a superfan yet also goofy and charming.  I like her so far, even if the “nudist” thing seemed a little put-on.  Joey seemed to also click with her.  I’m thinking Christine could pull an under-the-radar type game as she doesn’t have the offensive personality that is so easily targetable at the beginning.

Who let Willie Geist on Big Brother?  Doesn’t he look a lot like Willie?  Anyway, this undercover cop is again going dark and pretending to be a part-time recreation coordinator. What the hell is that?  You know this lie will come out eventually and backfire.  But he seems nice enough though, and will likely fit into some guys alliance down the road.

Ugh, this guy.  He’s literally the worst on the show so far.  He’s positioning himself as a combo of Dan and Dr. Will, but he’s overdoing it so far.  He’s already agitated Frankie, an HoH, and just comes across as insufferable.  I predict an early boot for this jackhole.

Religion certainly has a place in society, but Big Brother is not one of those places.  Her schtick has gotten tiresome already, and like Paola said in her confessional, does Jacosta KNOW what Big Brother actually will entail?  I have a feeling she’s another early boot.

A goofy, laid-back pedicab driver who seems pretty harmless so far, although he did end up the last guy standing vs Caleb in the HoH competition.  Probably one of our sources for comic relief in the house and likely someone to find a good alliance as he does have some gameplay and social skills.

And now we’ve met all 16 houseguests for Big Brother 16!  Time for shit to go down! As you can see from my new handy-dandy chart here, a nice web of relationships have already formed in just these first 2 episodes.  The initial 3 named alliances are still intact, but Nicole wisely observed that with the other 8 having arrived, it’s inevitable they’ll crumble.  Can’t wait!

With the other 8 now in, I also have tracked certain pairings based on what the show told us, both romantic and strategic/friendly.  If the strategic/friendly evolve into a true alliance, I’m going to group it accordingly; also, once an alliance breaks, I’ll indicate that as well.  The romantic pairings are also drawn, at least as it seems from the show at this point.  Arrowheads indicate the interest direction, so if it’s a one-way arrow, it’s to indicate what the show has revealed.  I’m not a Live Feeds watcher, so obviously this chart will probably be a wildly wrong representation of what’s actually happening.  Don’t care, to be honest.

Just from the lines above though, you can see that Zach and Hayden should be worried, or at least aware that they need to make some actual connections.  Zach can be an asshole all he wants, but without some allies (like Dan and Dr. Will always had), he’s fucked.  Hayden will definitely make those connections, but at this point, he hasn’t.

Once all 16 houseguests were settled in, Julie gave us the down-low on what the game will entail with regards to the Head of Household twist revealed yesterday.

This twist really does make you have to really consider who to nominate. If you nominate two physically strong people and the Battle of the Block is strength-based, you’re screwed as the HoH as they’ll likely win.  Same logic goes for nominating two physically-weak but smart players and the challenge is a puzzle.  You just don’t know.  This twist is interesting but I wonder how long it will go – I think it depends on if someone figures out how to game the system or possibly break it.  The original gameplay is solid (although backdooring-through-the-Veto has become too prevelant as a tactic) and I figure it has to eventually go back to that once the cast is whittled down to a certain #. 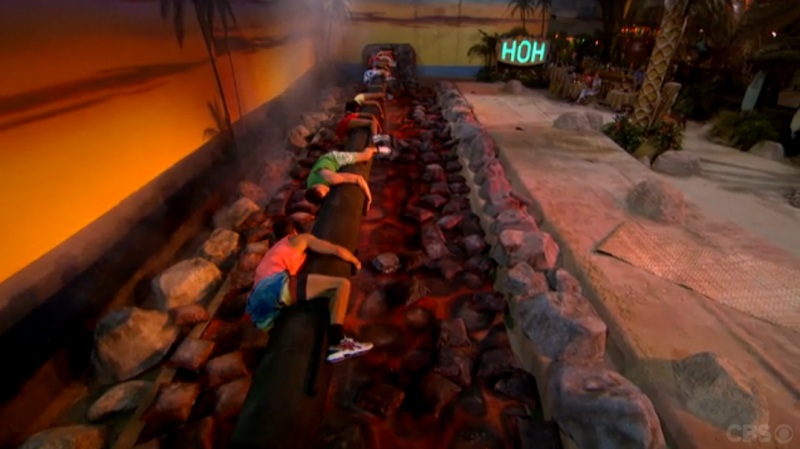 The 8 houseguests had to hold on to a rotating spit over “hot coals” for as long as possible.  Whoever held on longest wins HoH.  This competition seemed WAY harder than the first one.  It was interesting to note that this position really did flatter their asses, with everyone noting Caleb’s was particularly fine.  Can’t deny that.  But when the barbecue sauce element of the challenge came into play, they all looked like Carrie.  (Note:  Caleb was still hot even looking like a psycho) 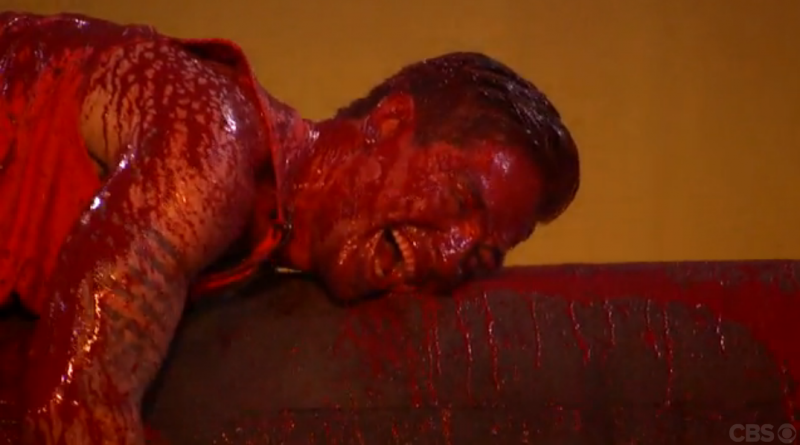 In the end, while it came down to Hayden vs Caleb, Caleb was so confident up there that Hayden never had a shot.  Caleb wins the 2nd HoH and marks himself as a super threat.

I’m very interested to see how the nominations play out and what this Battle of the Block looks like in the next episode!  Good luck, houseguests.