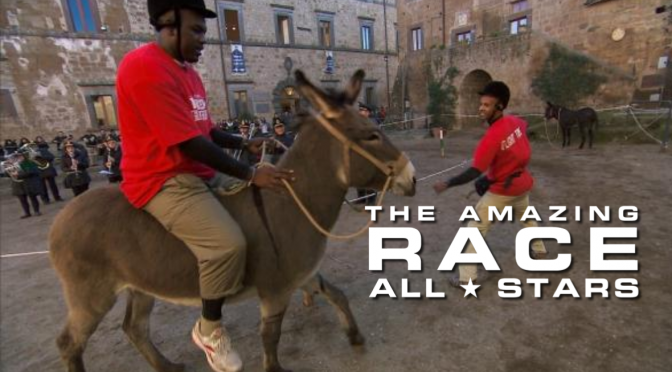 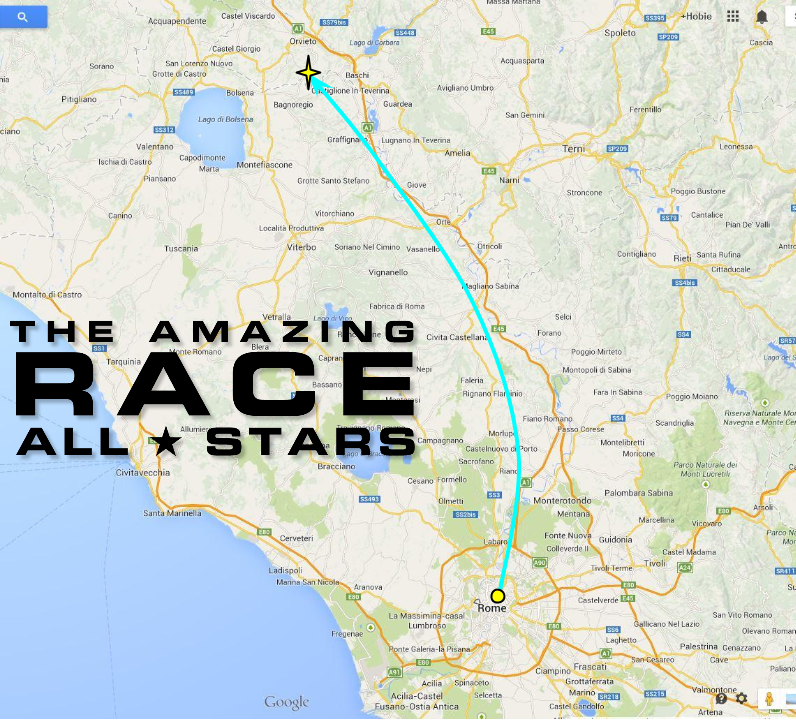 I’ve been a bit of a slacker in getting this recap up and don’t have a good excuse, so let’s just give me a pass on this and get down to what was a pretty damn good episode.  First, I loved that it was still set within the Italian countryside – the Tuscan outdoors never fails to thrill me.  In 2013, Larry & I took that excursion to the Tuscania region which is about halfway between Rome and Orvieto and saw some amazing stuff but I covet the hell out of that dramatic bridge in Bagnoregio.  The trifling between Dave & Connor and Brenchel was a tad amusing but also frustrating, which I’ll get into later. And finally, even though the Globetrotters are fantastic guys, I am actually glad they’re out of the race.  They weren’t good racers, plain and simple.  Great fun and full of heart?  Yep!  But terrible racers.  Alright, let’s get into this. 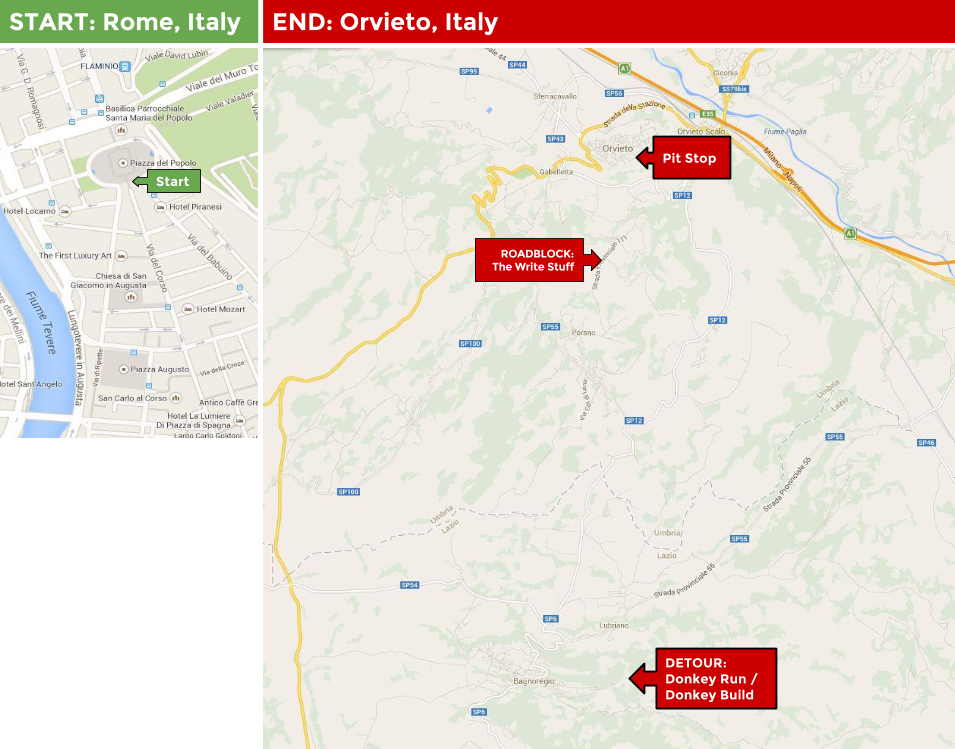 The first challenge was apparently just getting out of Rome, at least for the Globetrotters.  Everyone was directed to drive to the Civita di Bagnoregio, which ended up being the jaw-dropping saddle in gorgeous Italian countryside.  As you can see here with Brenchel, it was just amazing.  Wanted to go back right then.  On the way there, Caroline & Jennifer strengthened their ties to Dave & Connor by caravaning there, but of course fate splits them up, and the Country Girls feel betrayed.  Oh boy…. 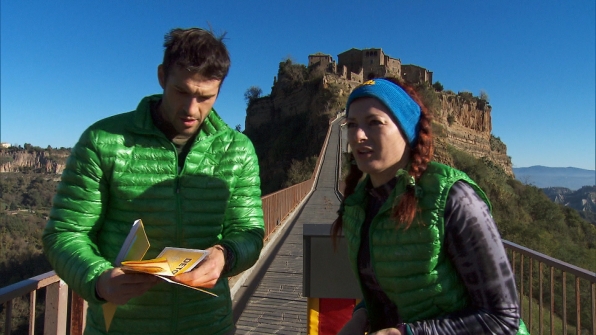 Anyway, Brenchel start the leg out in front and manage to maintain that lead almost the entire leg.  How?  By racing very competitively, and playing in a way that ends up irritating quite a few people.  In this leg, the main anger receptacle was Dave & Connor, who were “rebuffed” by Brenchel when they asked at the Donkey Run detour where to pick up the outfits.  Now see, I am of two minds of this.  One side says that you can still play friendly with the other teams especially when there’s not much at stake at this point.  The other side though, is that it’s a race, and as we are now past the halfway point, it’s everyone for themselves.  Alliances are great when convenient, but the race is magnitudes more competitive now, so things like the Country Girls feeling betrayed is a little naive.  Even though Dave & Connor didn’t intentionally ditch them, if they had, deal with it.  You can’t both win the $1M.  So, with a Double U-Turn ahead, it’s especially vital that you get to it first or you’re likely to get U-Turn’d.  That’s exactly what happened too, as Brenchel get done with the Detour first and decide to U-Turn Dave & Connor in that moment.  And you know Dave & Connor would gleefully U-Turn Brenchel if given the chance.

It was interesting to see Rachel’s reluctance to actually U-Turn Dave & Connor instead of choosing someone like the Cowboys.  Brendon is persistent about it and it probably is the best move to make.  Of course, that just solidifies Dave & Connor’s antagonism towards them while also placing the scene for Dave & Connor’s eventual bonding with Leo & Jamal.

What was also of note was that the Cowboys had to play their Express Pass this leg or else keep it as a souvenir.  So they wisely realized, let’s jump the Detour and see if we can get to the U-Turn first.  Unfortunately for them, Brenchel were pretty much on fire this time (even with Rachel falling off her donkey during Donkey Run) and got to the U-Turn first.

So nobody was able to derail the Brenchel train while the U-Turns end up being mostly useless as none of the targets ended up getting eliminated.  That was mostly due to the Globetrotters pretty bad performance this leg, heavily due to them having a very hard time getting to the Detour in the first place. Even more strange, Dave & Connor felt so bad about U-Turning Leo & Jamal that they ended up helping them with that final “secret” of the Donkey Build challenge in that you had to use the supply box as the final piece. That good will in turn led to Leo & Jamal returning the favor (even though the karmic scales were well-balanced) at the Roadblock when Connor was having a mini-meltdown.  U-Turns make strange bedfellows!  And I wonder if it comes to bite Brenchel in the ass soon now that pretty much everyone left are none too fond of Brenchel. 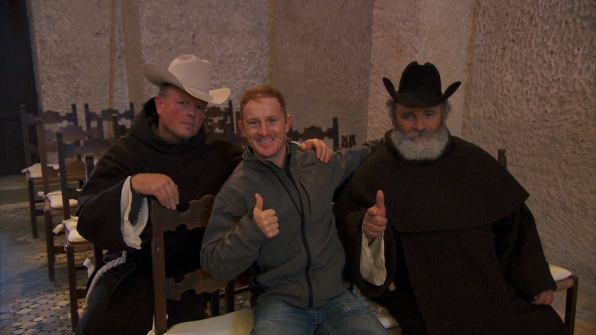 Loved this challenge – it required patience and accuracy yet again, and couldn’t be rushed through.  I was also fascinated by how gold-leafing actually works!  Things I didn’t like?  Brendon’s prayers.  Ugh.  Things I liked?  The Cowboys having a lot of fun with the priests there, giving up their hats for them to wear.  It was awesome.  Was also amused at Dave & Connor having a mini-implosion, first with both absolutely refusing to do the Roadblock and insisting the other do it, then seeing Connor’s frustrated side come reallllly out.  I mean, really, you’re about willing to take a penalty because you just KNOW that you can’t do this?  Come on.  Anyway, he does get his shit together and gets a solid from Leo.  But of course before all that, the “artiste” Rachel finishes up first and secures Brenchel’s second victory in a row (and third overall).

Gotta say I’m a bit surprised at how well they’re doing, but with next week’s preview showing Jennifer uttering Rachel’s famous spiel, “The Amazing Race is supposed to be good!!!!”  I’m a little excited.  Drama!!! 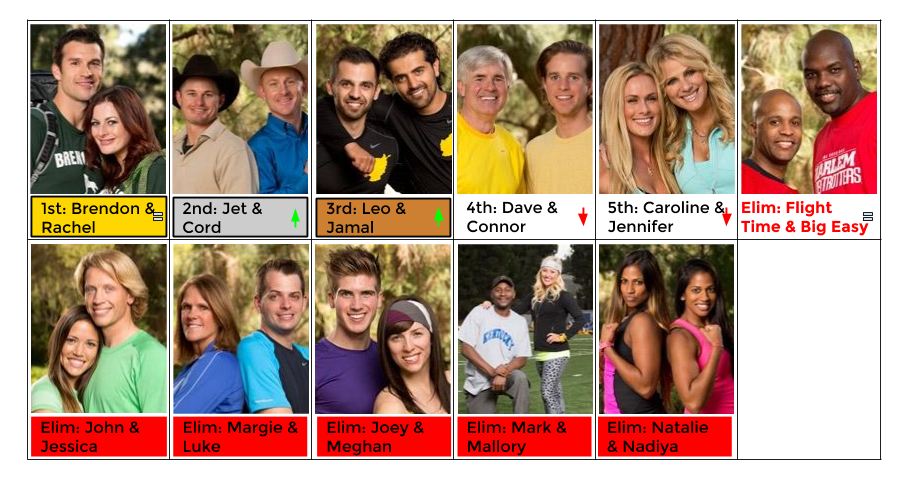 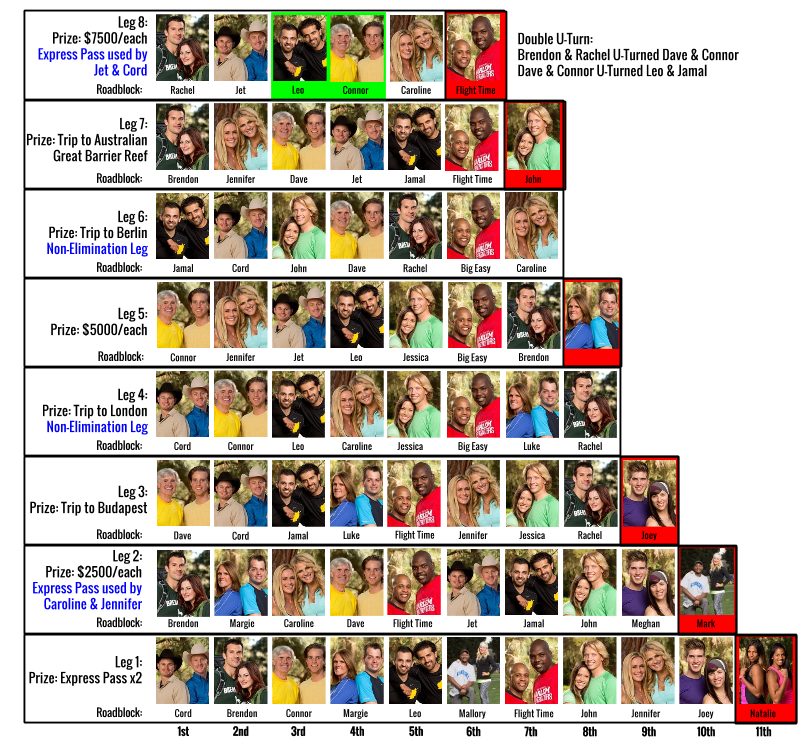