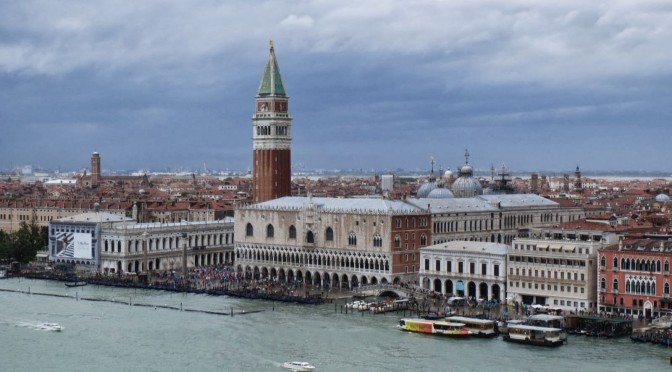 I had gone to Venice only once before, and that was with Wendy and Jason over a decade ago, back in 2002.  Even then, it was just for a brief half day, and from what I remember of that time, I wasn’t that impressed.  I know, I know….what the everloving what?  So heading into this two-day destination, I was honestly hoping it was just going to be merely tolerable.  It ended up being a highlight of the trip! I think Larry & I agree that we could easily spend so much more time in Venice, whether it’s for the food, the scenery of all the canals, the food….Ah, but I am probably getting close to repeating myself, as I’m sure I probably wrote something similar in my travel journal which is getting posted below.  Long story short, if Larry & I do an all-Italy tour, Venice will definitely be on it.  Along with Rome. And likely Sorrento and the Amalfi Coast (Portofino!?).    I just want to fly there right. now.  Alright, get a hold of yourself, Barnes!

Regarding the end of the day at Dubrovnik, I really can’t say what we ended up doing that night. ACTUALLY, I do remember now. After dinner, I ended up playing Blackjack that night in the casino, and meeting a few fun people and spending quite a bit of time at the table, hanging in there for a long long time. Met the couple, Chloe and Christian, as well as my Wendy-substitute, Jackie. The dealers were a lot of fun too, with a cute Luka and a funny Vladimir. I can’t believe I almost forgot that excitement. Larry watched for a little while but ended up going to bed while I stayed there.

The next day was Day 9 – Venice (day 1 of 2)!!! The forecast was for rain and yeah, that forecast wasn’t wrong. We weren’t getting into Venice until the early afternoon, so we had most of the morning to look out the windows and see that the weather had started off just merely a bit cloudy to getting progressively worse. Finally, when we got to within sight of land, it was pretty miserable. Larry & I went to the Sky Lounge which is up forward in order to at least see the approach into Venice, as by all accounts, the view as you enter the city from the cruise ship was fantastic. Well, unless you’re inside the Sky Lounge watching it through a rainy storm. UGH. As we got really close to Venice though, the Sky Lounge got really crowded and I was just like, fuck it, let’s go outside and get our umbrellas if we need to so we can actually get some decent pictures. Then, it happened. The rain tapered off. Then it freakin’ stopped. It was glorious. Right when we got to the Venice area where all the beautiful scenery was, the weather was almost perfect. Not blue skies, but gorgeous nonetheless.

Our Venetian Entrance on Equinox

Hmm but then it started looking cloudy

And then it was raining

The Campanile in the distance

we went outside, and it wasn’t raining!

In fact, the weather cleared up!

So we got to do our Grand Canal entrance outdoors

Look at the megayachts out here

The Campanile, Doge’s Palace, and tons of tourists

Looking into the Grand Canal

A view of the Grand Canal

One of the many many bridges in Venezia

You can see where we’re headed

The cruise ships have to park a bit on the outskirts of the city, so you have to take a tender to get over to the main touristic part. Our excursion for the day was touring St. Mark’s, the Doge’s Palace, and a glass blowing demonstration. We ended up getting in a bit late so the St. Mark’s tour was cancelled, but we did get a fantastic tour of the Doge’s palace, which is what I actually didn’t see with Jason & Wendy over 10 years ago. Loved seeing all the stuff from Assassin’s Creed 2 again. Ended up chatting with a guy who was by himself and was nice – Dave – while on the tour. At the end of the tour, after the glass blowing demonstration which was a lot like the Turkish rug thing in the first tour where they are clearly after your money, we parted from Dave but it was clear he was hoping for some friendship. Felt bad…

Waiting to be let out – we arrived a bit late

Look at this gorgeous sky

Worth the wait for this weather

In our tender waiting to get out

The Bridge of Sighs

At the Doge’s Palace

Inside the Doge’s Palace courtyard

You can see St Marks Cathedral in the background

Pic taken by Dave, who we’d get to know more later

Pretty extravagant in the Doge’s Palace

Gold is how they rolled

Walking the Bridge of Sighs

Looking out towards freedom

Where everyone is looking at the Bridge of Sighs

Back out at the courtyard

Were we in Vegas?

The square where the executions occurred

In the Venetian glass-blowing factory

Anyway, Larry & I went off on our own to have a dinner in Venice, and it was pretty great. Found a place decently reviewed by Tripadvisor and while the tables were nothing but close quarters (initially with some older French women who knew only a few English words), it was good food and a great waiter, handsome and funny. After that we wandered a bit but when it started to truly get dark, that was when we decided let’s head back to the ship as you never know when or where the “bad” district is. It was really nice to wander the city though, and we found a gelato store manned by quite a cute guy. The area by St. Mark’s had also started to get flooded a bit as the high tide had rolled in. We had heard an alarm earlier, but decided to just find food instead. Through it all though, it was clear that I had misjudged Venice from before. It is certainly a place where you can spend a good amount of time wandering the area and enjoying all the restaurants.

The back of the Bridge of Sighs

Larry and a Venetian canal

Looking for a place to eat

Found it, thanks to Trip Advisor

We found some gelato – yummm

It’s wonderful to see all these neat little restaurants

Heading Back to Equinox Upon Nightfall

Our tender back to Equinox

Equinox in the distance

All lit up and dramatic