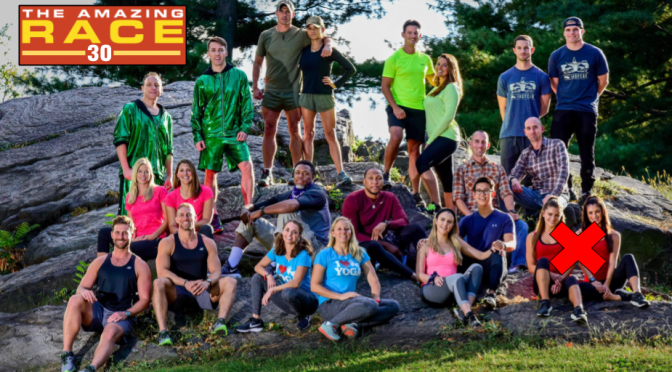 I may have stopped recapping these for a while as life gets in the way as does motivation, but I never stopped watching the show.  And with a Cody & Jessica from Big Brother on this season, it was certainly going to get viewing rotation! 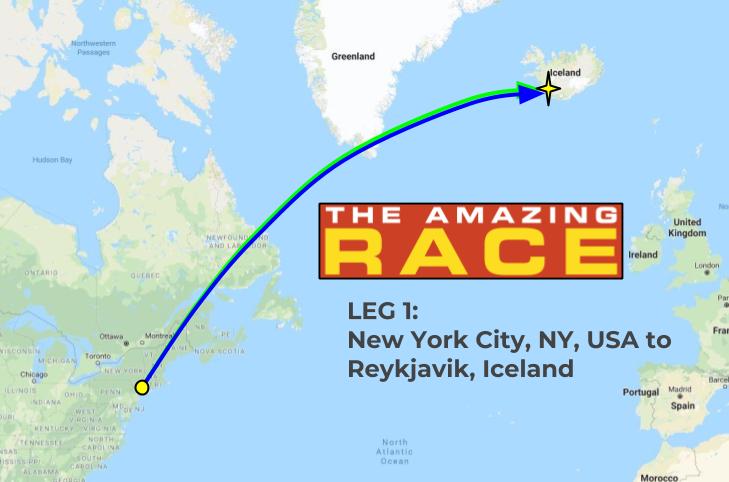 So this season’s gimmick for casting is that every team is super competitive in whatever arena it is they do.  So there’s competitive eaters, Big Brother contestants, Indy 500 winners, etc.  I am not nearly motivated enough to care about all of the teams yet, but there are some standouts…including the cute Indy 500 winner and then these hotties: 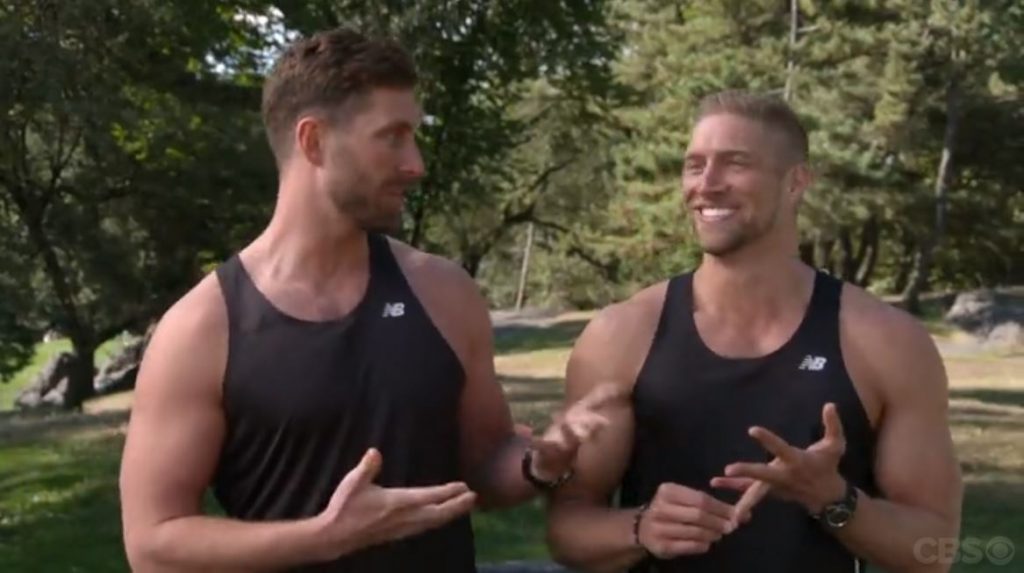 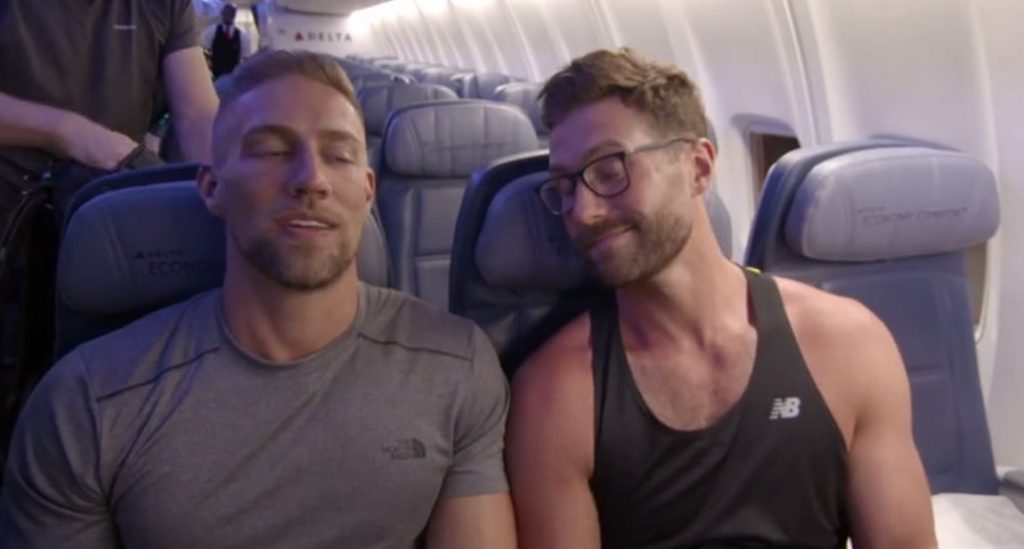 I’m assuming they’re gay from their outfits, speaking voices, and hotness, and apparently they’re hip classical musicians too.  Please let them stay in this race for awhile, and let’s have a Turkish mud bath challenge please? 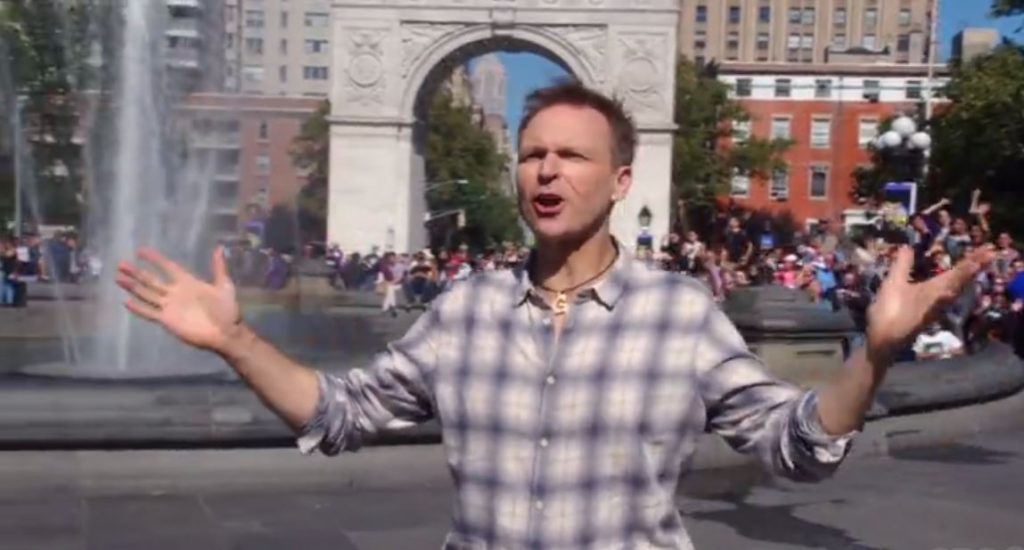 Anyway, we start this season at Washington Square Park in the Greenwich Village area of NYC, get introduced to the teams, and then they’re off to get their clues in the fountain and then over to JFK to fly to Reykjavik, Iceland.  No drama in getting tickets on a quicker flight, but we all know that shit’s coming in a later episode.   The early frontrunners are the Yale Debate Team (Henry & Evan) and surprisingly Big Brother (Cody & Jessica).

I say surprisingly as Cody & Jessica didn’t really make it that far in this past season of Big Brother, and managed to actively turn the entire house against them.  It was pretty astounding.  Jessica’s game was definitely hurt by Cody’s stubbornness and terrible gameplay instincts, as she had a serious chance, at one point, to do well in BB.  But she, along with many of us with eyes, got swept up by Cody’s looks and body and managed to utterly ignore the damage to her game he was causing.   But they’re still together so I guess maybe she’s not too unhappy with the results.  But based on their ending leg stumble which completely hinged on Cody’s stubbornness on where they were supposed to go, I’m predicting yet again that Cody hasn’t learned anything and will cause them to lose the $1MM grand prize at the end.  Guess we’ll see. 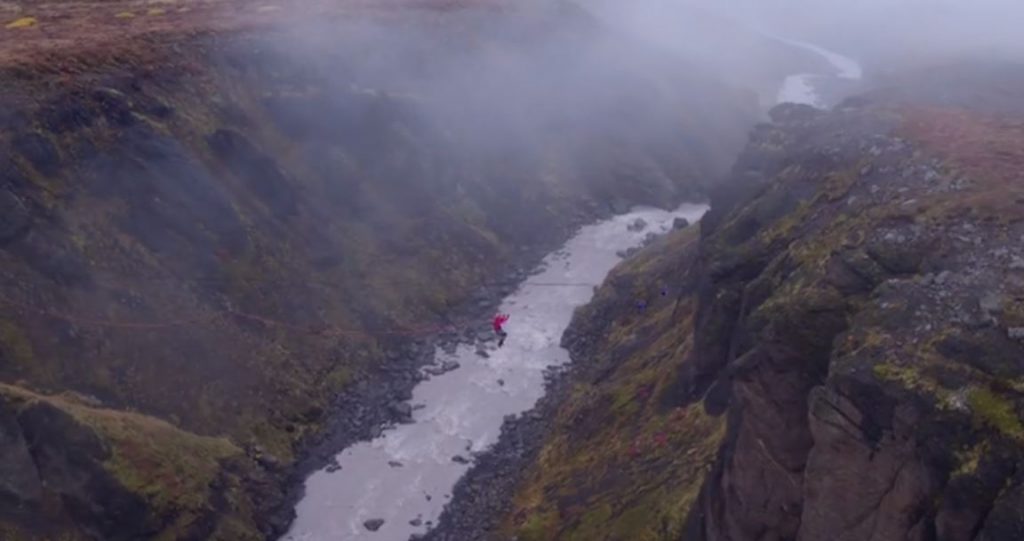 Once in Iceland, each team had to drive to this big ass waterfall that a steel-line had been strung across – with one of the team having to climb out and get an Icelandic flag and the other having to pull them back in.  I honestly think this challenge would be one I’d be able to do as most of the time, you have no chance to look down and see how high up you were.  Who knows, I could be full of shit.  Larry & I watch this and try to figure out who would do each Detour/Roadblock and there are some clearly suited for one or the other.  He immediately said he’d not be doing this particular one. 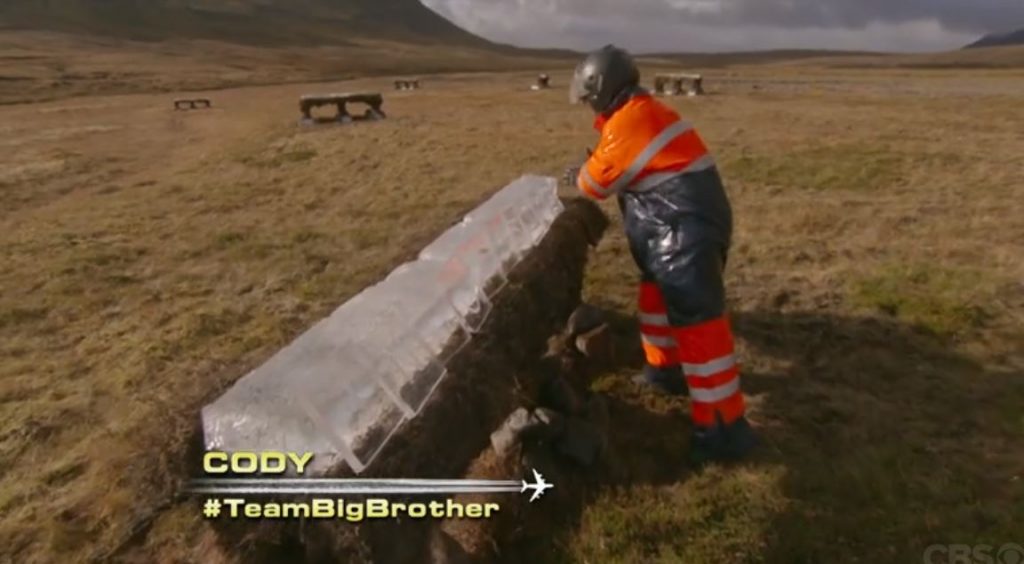 This detour is where things go all sorts of jumbled as the damnable Attention To Detail snared up nearly EVERY team…except surprisingly Cody.  To this twist of fate, I’ll only say that I think he got lucky, as while most figured out that while riding around in the little dune buggy and looking for letters, the small number associated with the letter indicated its position, it was the fact that there were two types of Os present that caused chaos.  If you luckily put your O with an accent in the right place, yay you!  And I KNOW that’s what Cody lucked into.  The poor basketball players though got super screwed by this challenge as he just did NOT see that there were differences in the Os.  Here’s where the typical Amazing Race errors are seared into teams’ brains, as if it’s not “Read the Fucking Clue” then it’s “Pay Attention to the Details” that will always get you.  Also, “Learn to Drive a Fucking Stick Shift” and “Figure out how to read a FUCKING MAP.”   I digress.   This Detour definitely allowed some people to make up some time while others like the Cute Indy 500 guy lost a few places.

There was another challenge where you had to find out some Icelandic beverages from clues that some super-weightlifters gave them, but it proved not to be all that big a deal except for some footage of some really shitty parking attempts. 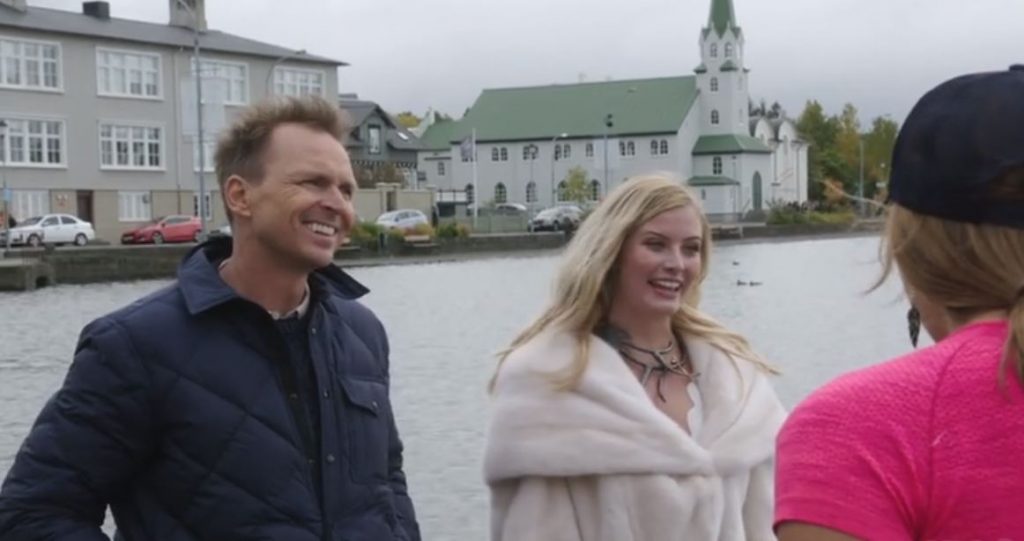 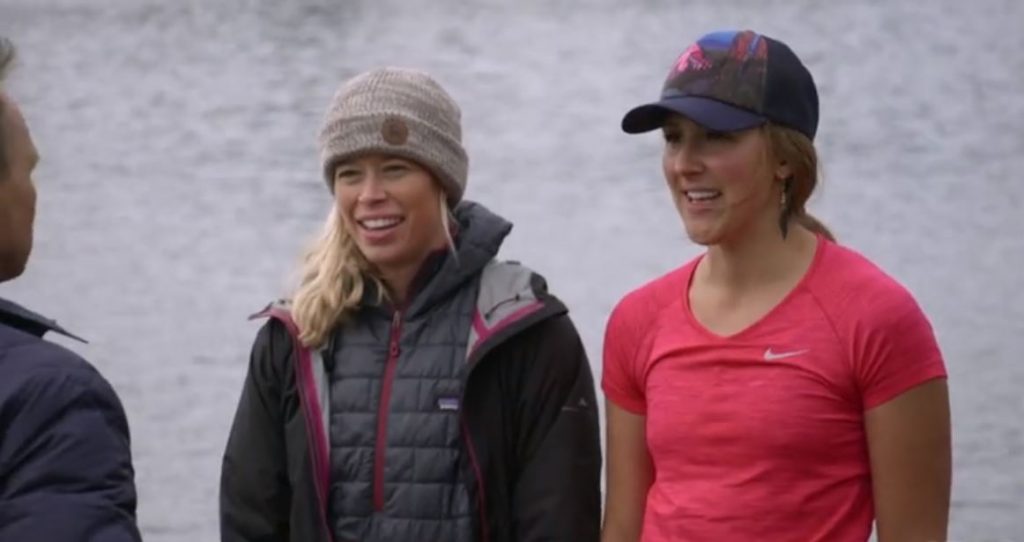 What we did get though was a pretty epic Leg Finish.  Miss Iceland and Phil were there and greeted the Pro Lady Skiers (Kristi & Jen) as the winners of Leg 1 as stupid-ass Cody lost he & Jessica the lead getting lost wandering around Reykjavik.  I was so impressed that Cody & Jessica were about to win this leg and then OF COURSE he gets them lost.  Ridiculous.  But anyway, that’s not really the best part of this leg’s end, as in the end, it literally ended up a photo finish as the final two teams were having a foot race to the mat and I don’t think either realized they were in that position. 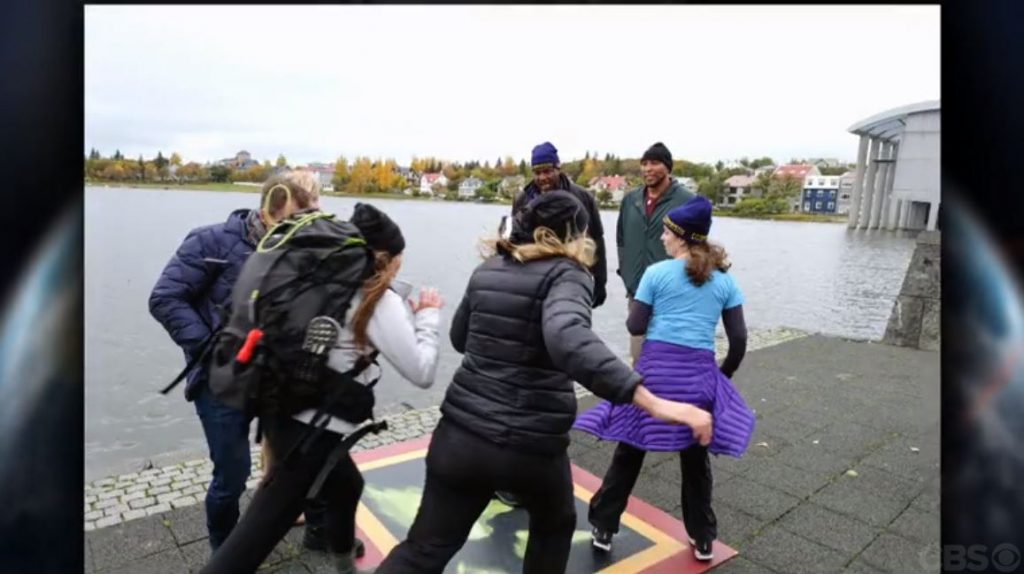 It really was like they stumbled into there and honestly, if the girl with the backpack in the picture above had dropped that damn bag LIKE SHE SHOULD HAVE AS SHE’S RACING FOR A MILLION DOLLARS, she probably could have outrun Yoga Goat Girls and beat the blonde woman to the mat.   But hey, if I had just studied European Flags some more or not bet like a dumbass in my one chance at Jeopardy, I could have possibly had at least ONE WIN on my belt.   So we all have our regrets.

In the end, I’m loving this season already and can’t wait for there to be a ‘who looks best in a speedo’ Detour that the Gay Orchestrators win in a landslide. 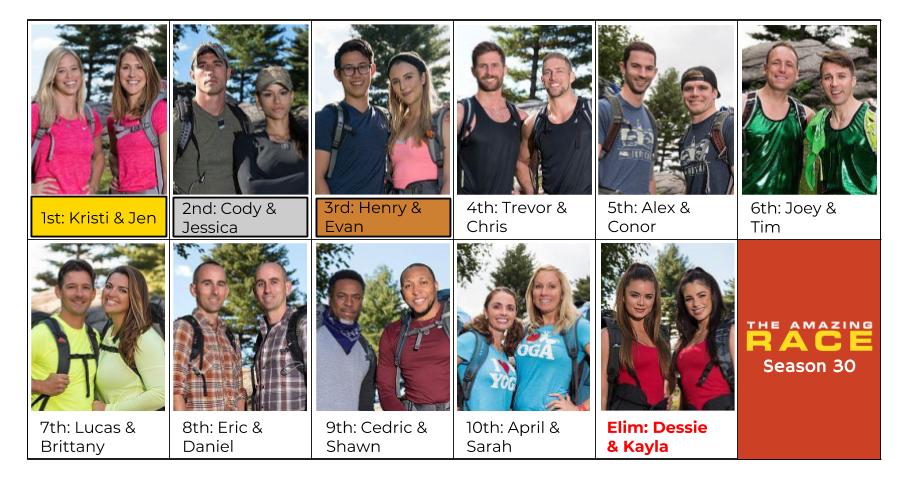