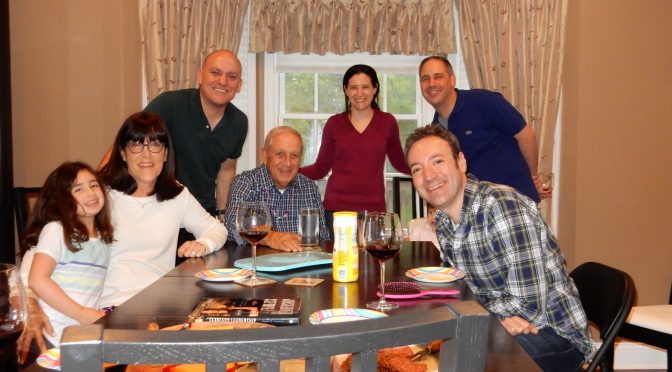 Normally, I’d insist on showing absolutely every picture I took….but I realize that will take a lot of time and effort.  So we’ll have to do a bit of editing, although I’m pretty sure it’ll still look as if I posted every picture I took.  What can you do?

It has been a busy month or so, since last I posted, whether it was work or vacation.  Work was especially intense and I can actually see a finish line for this engagement, if that can be believed. Probably shouldn’t jinx myself though, so I’ll leave it at that.

During Memorial Day weekend, Larry & I were heading out to New Jersey & NYC to spend the week with friends and family and to be able to attend our niece’s baby naming ceremony.  But before we headed back, I had bought us tickets to the La La Land in Concert @ the Hollywood Bowl….and it was great and a wonderful way to kick off the Hollywood Bowl season.  The kicker in this concert was that the orchestra would play the entire soundtrack while the movie played, and for this, they also included a jazz band, and there was a fantastic piano player who quite deftly played all the Sebastian music.  Pretty great experience, and aided by fireworks that kicked in at various moments in the movie.  Gotta love fireworks!

Happily, flying out of LAX in the middle of a long holiday weekend isn’t a complete shitshow, and even while you can’t ever escape traffic at the terminal, we were still able to get in and to the gate pretty easily.  Pro-Tip:  Get yourself Pre-Check.  Everything is easier once that’s accomplished.

I liked these pictures I took right after take-off, looking back at Los Angeles and the area around Rancho Palos Verdes.

Ready to leave at LAX

That first night, we got picked up by Fran & Joel and hung out at their place, eating some delicious New Jersey pizza.  Then it was time to pass out and hope we could get some sleep.

Our first full day back was going to be spent with the Rausches as we never get to see them.  Plus, the baby naming ceremony for Rachel was the following weekend and that was going to be a hectic, stressful day for them.  So here, we could just relax and have a nice day.    Which we totally did, as we hung out at their house for a while, chatting, having a few drinks, eating lunch, and getting to play with Stacey & Rachel.  We then went to the local zoo!  It may have been kind of dreary and rainy, but it was still fun.  It was back to the house for some more Lego Batman movie watching and games directed by Stacey before we then went to a wonderful dinner with just Jon & Alyssa as Fran & Joel picked up babysitting duties.  In other words, it was a really fun day.

Time for the Carousel!

They have a giraffe paddock at this zoo

Fun at the table

So this day was a day with Fran in NYC as well as us starting a temporary hotel stay in the city for a few days to be tourists and enjoy the old neighborhoods a bit.  First on the agenda was heading to the Metropolitan Museum of Art on the UES, as hello, it’s awesome there.  After Fran fearlessly navigated her way there – btw, the city seems to be a whole lot more crowded as lots of streets are under refurbishment? – we walked the few blocks to the Met and took in a few exhibits before heading to the roof.  It’s got a spectacular view of Midtown framed by a tree-top view of Central Park.  See for yourself!

Back in Larry’s old hood

Out front of the Met

We were NYers, once

Inside the Rei Kawakubo exhibit

Lots of art as fashion

Some you could see as wearable

Looking west to the UWS

There’s art up top too

432 Park is super tall – and was lost in clouds today

You’re a very wealthy millionaire if you live there

Inside the Egyptian wing

We then had lunch at the Atlantic Grill, which was the restaurant that Larry literally lived right above when he used to live on 76th St.  When you’d walk up to his place, you’d walk right by the windows of the restaurant that faced his building’s little courtyard.  So we were back!  It’s a great seafood restaurant and was a very nice way to celebrate his birthday.

At this point, Fran dropped us off over on the UWS as she headed back to New Jersey, and we then grabbed an Uber to take us to our hotel in Chelsea, the Hyatt House.  It was a fairly new building with just a few rooms per floor as the building is quite narrow, and it didn’t seem very crowded.  Also, it’s in a great location as you’re near Midtown but not quite in it, while also handy to a few subway lines.  Anyway, after checking in and getting settled, we had a show to catch, as Fran had gotten us tickets to see “Kinky Boots” on Broadway.  It’s a fun show about a British shoe company that is down on its luck until it realizes there’s a market for drag queen shoes.  It’s an enjoyable, fun musical with some standout performances, notably by the main queen, Lola, as well as the young owner of the shoe factory, played here by the lead singer of Panic! at the Disco.  A lot of catchy numbers made for a very fun show – definitely recommended.

Afterwards, we walked over to Hell’s Kitchen to grab a meal at one of our favorite places, Five Napkin Burger…so goood.

west of 8th is the theater where Kinky Boots was

Waiting for our subway back