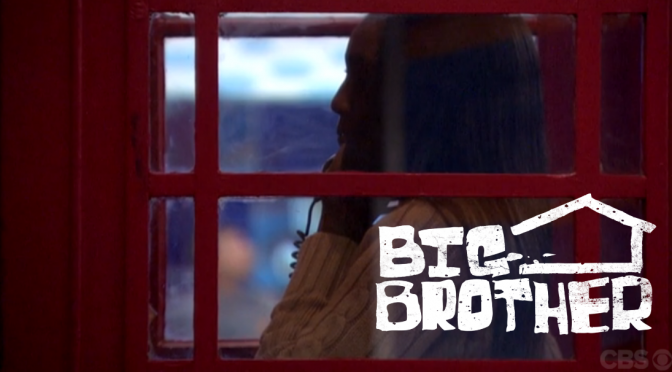 <– Previously, Da’Vonne’s fate seems doomed after Meg is put up as a pawn

Da’Vonne was lucky enough in this episode to actually win some power that could have done some good for her game, but in the end, while she admirably gave it a good shot, things didn’t turn out quite like she (or honestly, me) had hoped. Â Let’s break down how “The Last Laugh” played out. 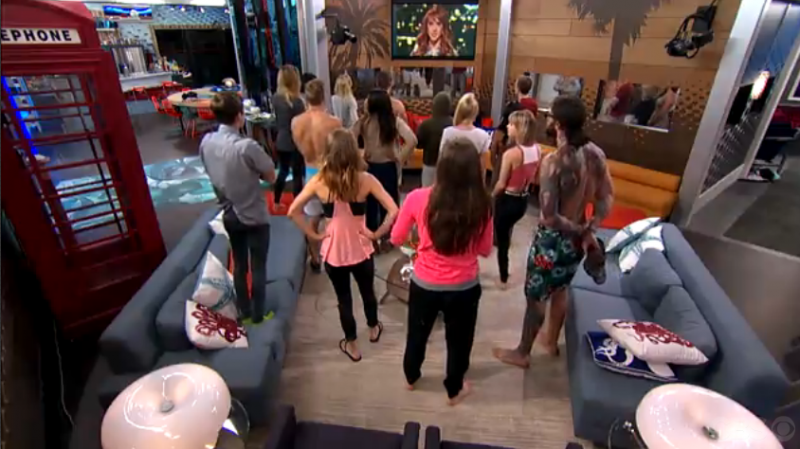 Kathy Griffin appeared on the screens when the houseguests were let back in and saw there was a new addition to the room, an English red telephone booth. Â She gave them the scoop that there would be 15 calls but only one of them was going to actually award the power of the Last Laugh. Â I had been curious how this was going to work out – could someone literally just stay at the phone and answer every call? Â Turns out, either the answer is no, or the houseguests made it fair.

As the calls start to roll in, Clay dreamily mentions that his sports number was 7 and that’s his favorite number. Â Da’Vonne isn’t impressed or intimidated by his announcement, as 7 is her lucky number too. Â So when the sixth call is done, Da patiently awaits the seventh call and sits outside the booth. Â Without hesitation, when that phone rings, she goes right in and answers the phone. 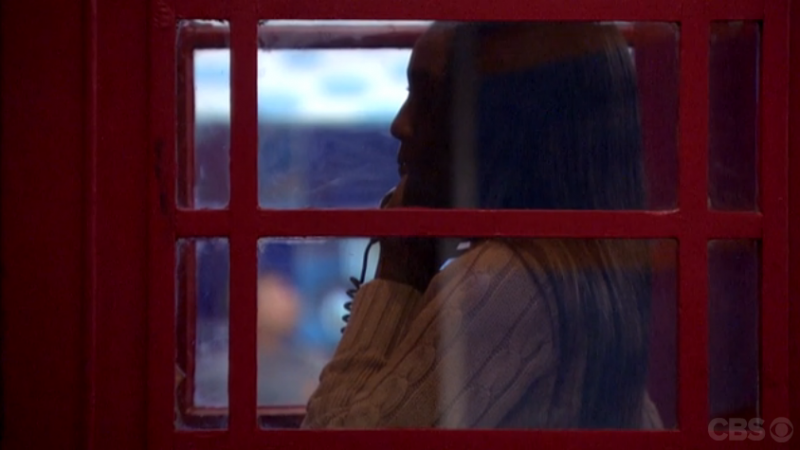 She maintains quite the poker face and upon leaving, complains that Kathy was so rude. Â But after the remainder of the phone calls are complete but no one admits to winning, she shares the news with Jason. 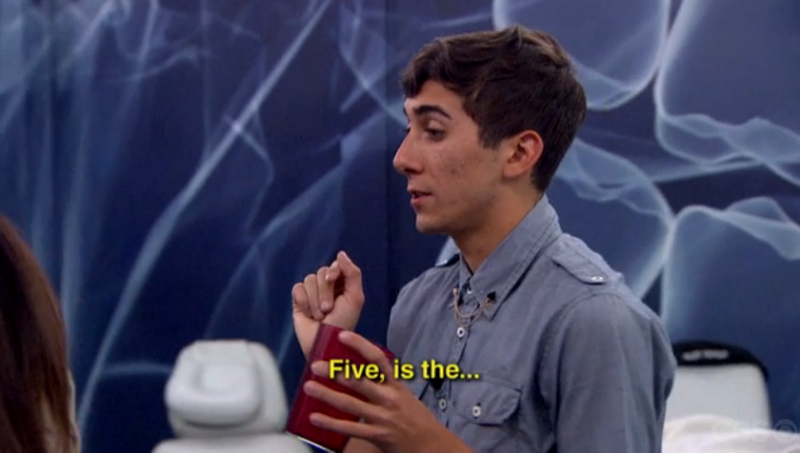 Da’Vonne is ready to make this house crumble with this power and is invigorated. Â Jason points out she really just needs to get 5 votes on her side, and that’s not a terribly high number at this stage of the game.

Da’Vonne managed to snag Audrey back to her side, which is freakin’ incredible as who would have thought that could have happened? Â We see even at the vote that Audrey kept her word as she knows that having Da’Vonne around as a target is certainly a good game move to have a bigger threat around than you are.

I thought at this point that Da’Vonne would safely have Jason and James’ vote, along with Audrey’s. Â I think she thought that too. Â Another vote that may need to be forced rather than asked though? Â That’s always an option. 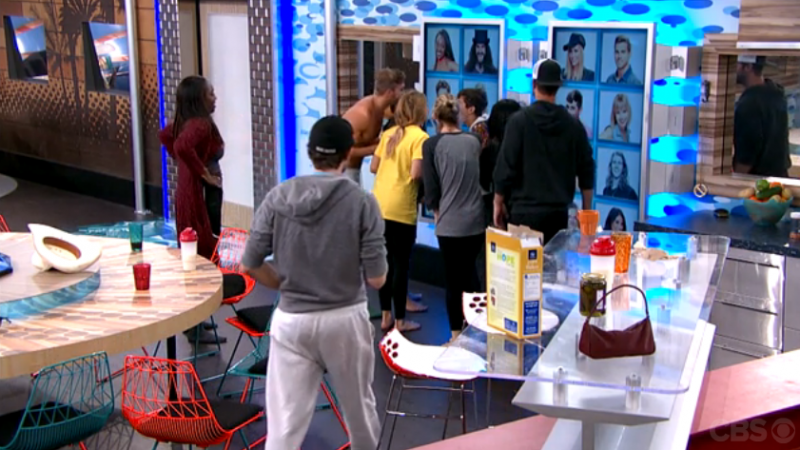 Da’Vonne notices that Liz/Julia looks noticeably skinnier than she did just this morning. Â These differences haven’t been going unnoticed by her and she starts to tell the other houseguests her suspicions. Â Finally, everyone kind of jumps on board this train of thought (Inside Out reference!) and starts to buy into it. Â How much they actually believe it isn’t totally clear to us at this point, but it does seem to alleviate some of the boredom. Â But this isn’t just a fun thing for Da’Vonne: Â she sees Liz/Julia as a potential resource to exploit. Â Damn straight!

So she goes to Liz or Julia and tells her what “the house” has been noticing and that there’s a suspicion she is a twin and has been switching out over the past few weeks. Â Now, do I think this was the best way to do it? Â In hindsight, it doesn’t look like it. Â Liz/Julia admits to seeing the wisdom of needing Da’Vonne around to keep a bigger target present in the house (much like Audrey was thinking), but as we saw from the voting, it didn’t scare her as much as Da’Vonne had hoped. Â I’m guessing that Liz is feeling secure enough with her friendships or was ready to deflect in the event of Da’Vonne coming after her. Â Or maybe the house was having fun but doesn’t really buy into the twin theory. Â I’m curious to see what this next episode reveals, as eventually it’s gotta come out and cause some problems. Â I see Jason being the one who tries to use it to his advantage next. 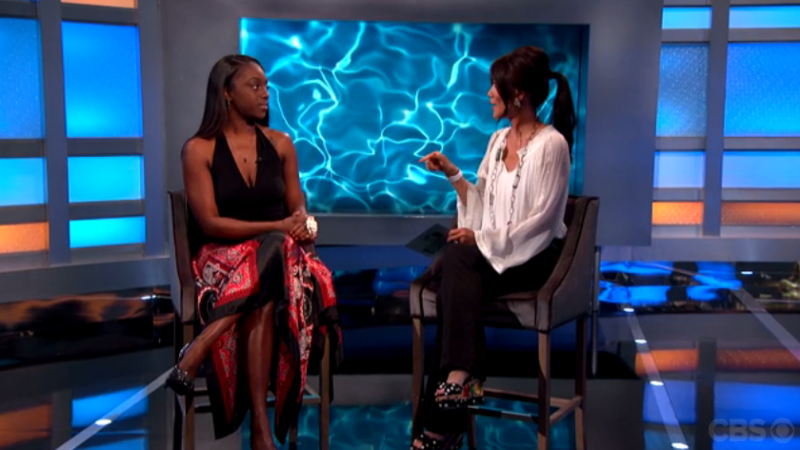 But it didn’t quite go the way she’d hoped. Â Jason and Audrey voted against Meg but the rest of the house certainly didn’t. Â Even with Da’Vonne using the “Last Laugh” power and keeping Becky, Jeff & Jackie from voting, it didn’t help. Â Okay, needlescratch moment: Â Why the fuck did she choose those three to not vote? Â  Was this to cast confusion and not out herself as the winner of the power? Â I’d have thought Clay was an obvious choice. Â Clearly there was more going on here than what the episode chose to show us. Â Whatevs. Â Da’Vonne was an interesting houseguest and was one of those who always makes the first few weeks entertaining, but will be barely remembered as we enter the next phase of the game when battle lines are much more clearly drawn. Â Sometimes I think it’s best to get out while you can if you’re not going to make it all the way to the end! 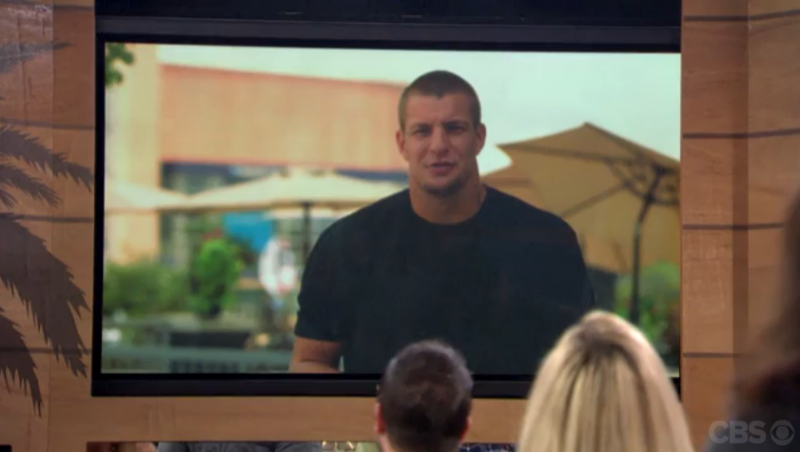 I’m seriously gay as I really have no clue who this Gronkowski guy is. Â I know what a “Super Bowl” is as well, but not that he played in one. Â You know, it’s really Â not that I’m gay – that’s unfair to gays who like sports – I just really don’t give a fuck about football. Â Bring back Kathy Griffin!!! 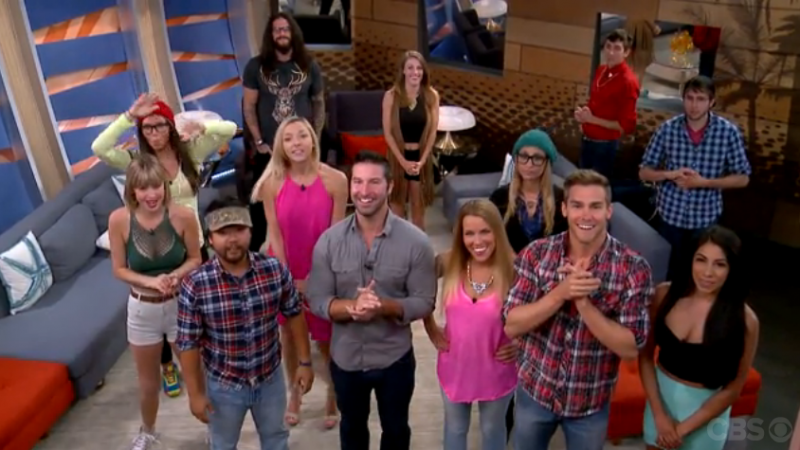 I do love this photo of the remaining houseguests (although I realize John is nowhere to be found…?). Â Clay looks like his heart is about to burst from his rippling torso, as does Jeff and possibly James. Â Everyone else’s reactions could be seen as saying so much…Jason is like, eh? Â Audrey is doing some weird-ass dance and it’s just like smdh…Steve is stressing out, Vanessa could not give two shits about this guy…LOVE IT ALL.

Sometimes when the HoH Comps happen, certain alliances just fucking dominate and manage to hold onto the power in some shape or form. Â This week though? Â I’d say this week’s HoH winners indicate a whole new power structure is going to be formed. 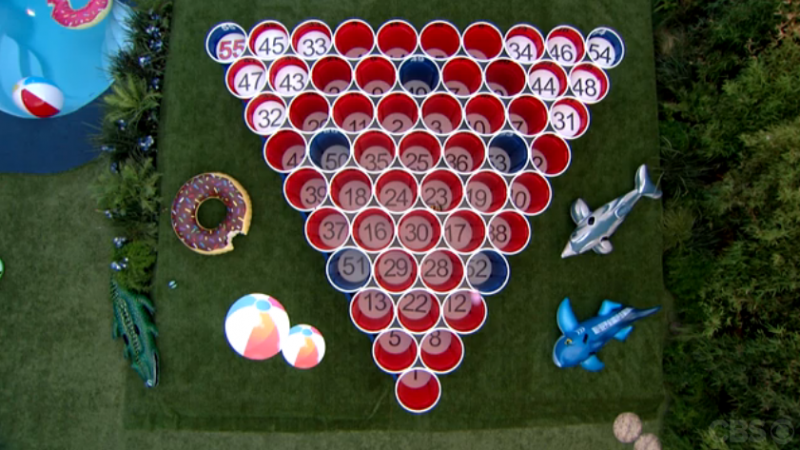 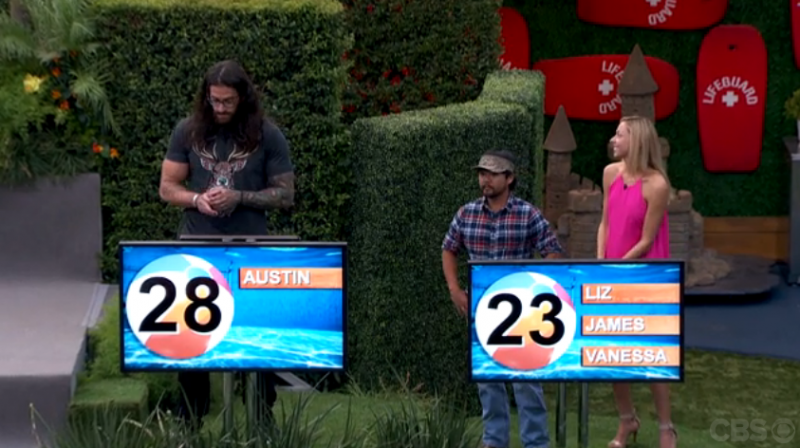 Austin ends up securing the highest score in the initial round meaning this big goofball now has half of the power heading into this week. Plus we know he is allied with Liz/Julia so that’s a good thing for her especially if the Twin Twist starts to devolve around her. Â But then we have a three-way tie with Liz, James & Vanessa having to do a play-off. Â I was hoping James wouldn’t get it as that would kind of be remnants of the “old guard” still getting power – but instead…. 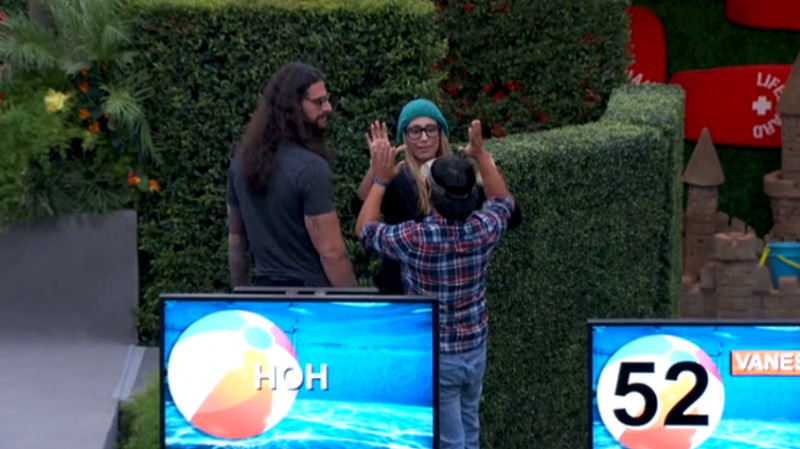 Our girl Vanessa dominates and even lands her ball into one of the high-scoring blue cups. Â You go! Â I’m honestly not sure what to expect from this next week. Â Neither of them have much in the terms of a BB Story just yet. Â  Vanessa certainly has a grudge against Audrey, but who doesn’t? Â Austin went to bat for Liz when he knew Shelli wanted to use her as a pawn. Â But beyond that, I don’t see clear targets for either of them. Â So like I said, I’m excited to see if this HoH pair ushers in a new chapter of this season. 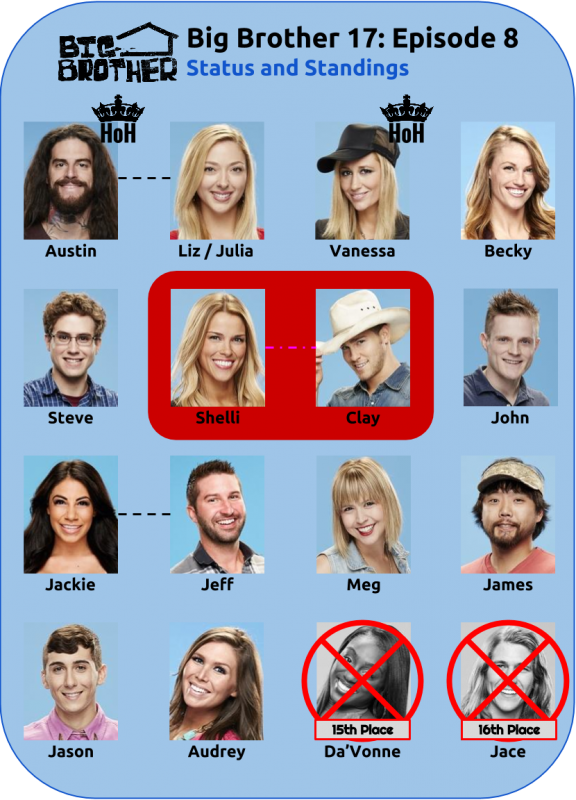 3 weeks in and we still don’t have a “named” alliance! Â That’s nuts. Â That leaves me able to move these portraits around as I see fit, and as I sense power standings, I rearrange as applicable. Â Unfortunately, Jason’s status is VERY fragile so down he is at the bottom. Â Audrey could be this year’s Victoria, but even Victoria wasn’t as crazy and polarizing as Audrey. Â I think Steve and John have acquitted themselves fairly well in these early weeks and are probably going to be part of some alliance soon, or at least kept around for a while as useful votes. Â And Shelli & Clay seem to be doing just fine as a pair. Â God love ’em.

Next, A NAMED Alliance Finally Emerges!—>