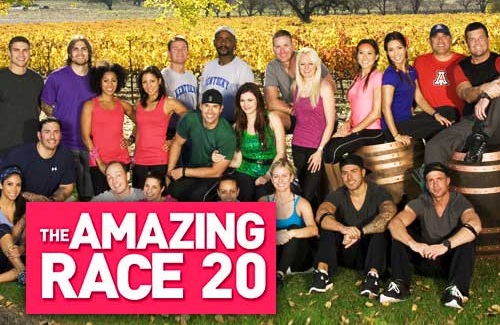 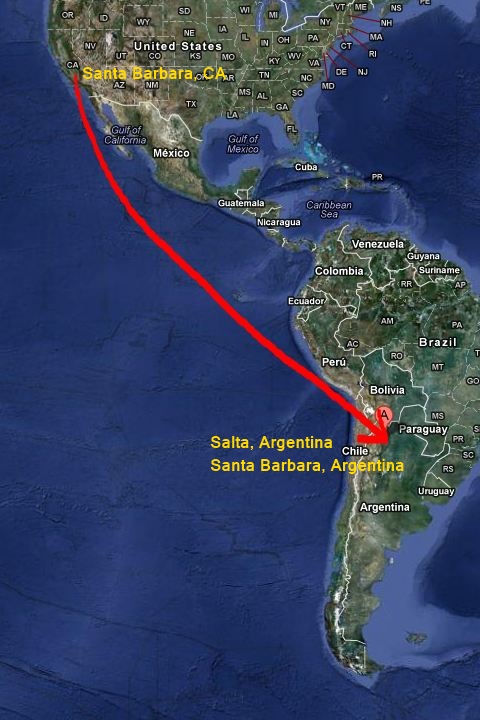 Amazing Race is back, bitches!  Accordingly, so are my own recaps of this amazing series.  I also had to bring back some, although not all, of my previous recap endeavors, like the map of where the contestants went.  I don’t think I can do the entire team lineup and placement roster or the giant combined map of all the legs thus far, but I think we can agree that the gist will be covered.

I just did a Survivor recap and the theme, as to be expected, was hotness.  So I come into this first episode recap carrying on with that mindset.  Alas, there hasn’t been any shirtlessness yet, so the hotness judgments all come from purely the face and what the body under the clothes merely hints at.  There are a few highlights on this race thus far.  If you’re straight, I believe you’re already sad at the turn of events in this episode as the very attractive asian women were eliminated.  By their own hand, no less, but that doesn’t make the fact that they are gone any less true.

So what happened?  Well, first and foremost, Rachel and Brendon from Big Brother’s last two seasons are on this time!  Yay!  Brendon is definitely one who is supremely hot, although we haven’t seen his body just yet.  Be prepared though, as TAR loves to do water challenges.  If last season was a precursor, we could also anticipate another oiling up in anticipation of some challenge that requires contestants to be in speedos.  Le sigh… that weightlifting posing challenge last year was heavenly.  Still think Ernie plays for my team.  Just sayin’. 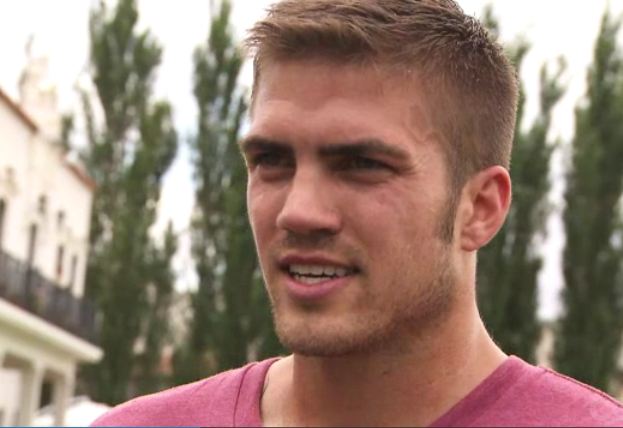 The race started in Santa Barbara, California, where we joined up with the teams all on bikes.  Phil was their pacesetter and told us that this was his personal passionate hobby.  We got the rundown on all the teams during this leisurely bikeride, and it’s too soon for me to really say what I think about each.  I’ll let their performances during these legs help guide me.  I can say that there are some definite hotties in the midst.  The first set of major hotness comes in the form of twins.  One twin is shaggy and one twin is most definitely not.  You can guess who I find to be hotter (Andrew, pictured above).  If Shaggy were to cut his hair, then damn.  Here are the twins together, Eliott & Andrew: 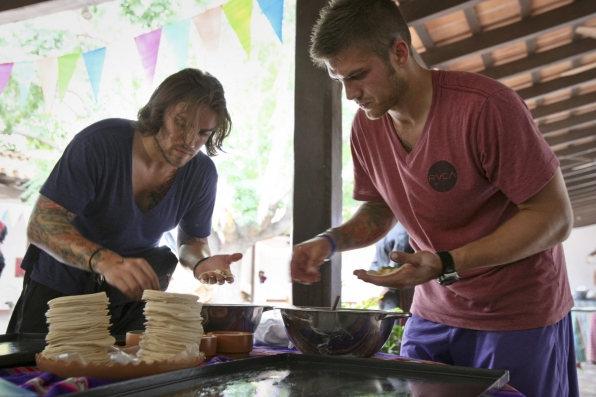 I’m very much looking forward to a water challenge.  When do we get to the Seychelles or Aruba?   Anyway, there were other teams there too, including some Southern yokel team, two border patrol guys, two female agents, some best friends, etc.  Then there was another hot guy – this one a Major in the Army who is racing with his wife.   I think they’ll go far, but the previews for next week show that they’re already cracking.

In Santa Barbara, the teams ended their bike ride at a vineyard.  Phil started the race, officially, and the teams were off into the vineyard to search through 100 floating balloons for a clue within each balloon’s basket.  Not much skill, but it certainly sucks if you are the last team to look for one as the searched-balloons were not popped, so you would have to make sure you knew where you already searched.  The golf girls were the last team to get through this challenge, which unfortunately was a sign of things to come.  After finding your clue, you were directed to another Santa Barbara, but this one was in Argentina.  CBS didn’t amp up any travel or airport drama and we were quickly ushered to Argentina, with the first 5 sets of teams about 2.5 hours ahead of the last 6 teams.

In Argentina, the teams eventually ended up at a small airfield that was the site of a skydiving center.  This is certainly an exciting way to start the race, and one that I can relate to as I once skydived in San Marcos, Texas, shortly before moving to the Azores.  An unreal experience to be sure, and one that gets your adrenaline strongly flowing.  It’s also utterly terrifying.  The buildup to actually jumping out of the plane is probably the worst part, as once you’re out of the plane, you just go to another level of joy/fear.  I remember when it was done, I was ready to do it again immediately.  I didn’t. A week later, I was still kind of enthused, but the fear had crept back in.  I realized then and still do that jumping out of the plane is a one-and-done thing.  If a million dollars were up for grabs?  I’d reconsider.  I loved the switcheroo of this Roadblock, as the one who volunteered naturally assumed they would get to do the jumping.  Psych! 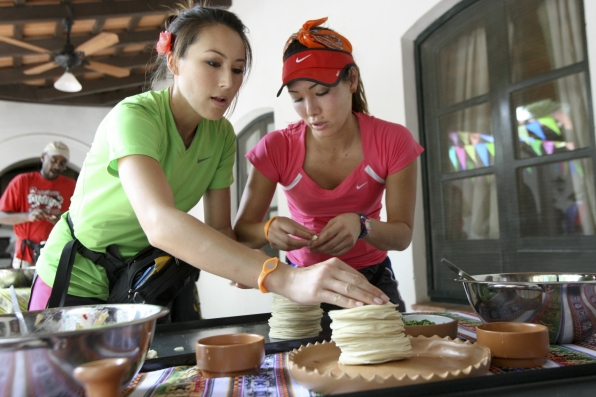 Most people had no problem getting this Roadblock done, as while one person jumped, the other had to drive their car to the landing area.  Not really that big a deal.  Except for the golf girls team, Misa & Maiya.  The driver ended up driving their car into a sand pit.  Fitting.  I’m not sure how long it took her to get that helpful Samaritan to tow the car out of the sand, but it ended up putting them at the end of the pack.

After completing the jump, the teams went to a villa where their challenge was to make 120 empanadas.  The key was to notice that the 60 cheese empanadas were crimped one way while the meat-filled empanadas were folded/pressed a different way.  The top three teams switched places a lot at this point, with the hot major and his wife overtaking both the Border Patrol team and Team Big Brother to win first place and the Express Pass.  The other teams all made it through and it finally came down to Golf Girl Team and Team Douchebag (seriously, the members’ names are Joey “Fitness” and Danny – two proud Guidos who to my eye look far too old to be attempting that Jersey Shore look).  Team Douchebag took forever to do the challenge and it allowed Golf Girl Team to overtake them, but two things happened.  One, the GGTs had to grab their bags from the car as they left them there unlike every other team.  Two, GGTs completely fucked up when searching for Phil.  In a literally jaw-dropping sequence of events, GGTs ran into the plaza where Phil and the Finish Mat were awaiting, but the GGTs never looked to their right.  They looked straight ahead and to the left, and THEN THEY TURNED AROUND AND LEFT.  Unprecedented in terms of making a mistake at the last possible moment.  Oy. So while they went searching the rest of the villa, Team Douchebag finished their empanadas, scooped up their bags and immediately found Phil.  Douchebags: 1, Airheads: 0. 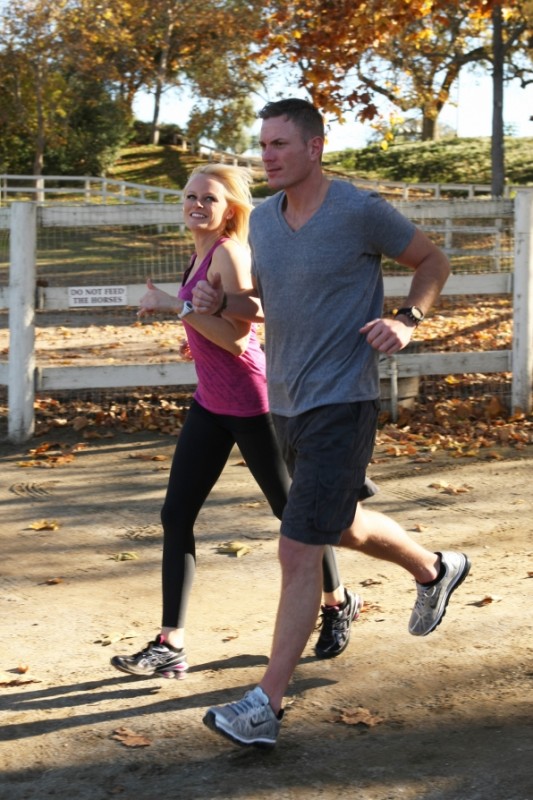 I’m very excited about this season.  I love Rachel of Team BigBrother and can’t wait to see her inevitable meltdowns.  The previews for this season have already shown two of them, and I KNOW that the stresses of the race are only going to bring more if they hang around long enough.  I’m sure they will persist too, as while they may be delusional, they are strong, athletic and competitive.  It wouldn’t be too surprising to see them make it to the end.

As usual, I will also be writing recaps of the Bonus Scenes from the CBS website for the RealityNewsOnline site.  I’ll link to it here as well as within my Articles link.  And if you’re wondering who this last picture is of, it’s the winners, Dave & Rachel….Dave being the Hot Major.