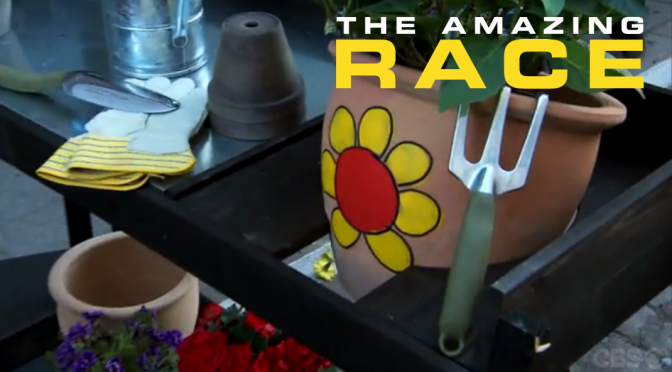 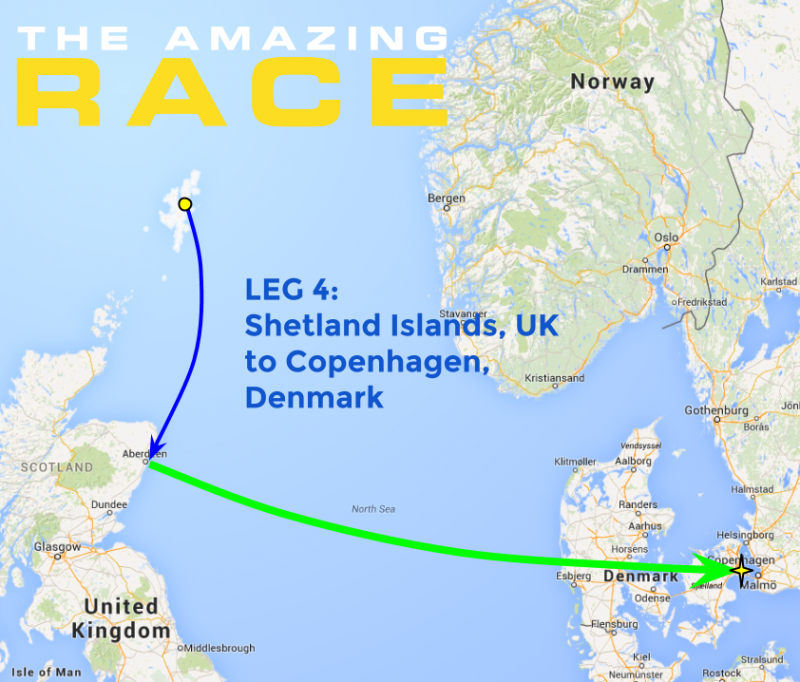 I’d call this a very necessary episode, especially for my sense of “getting what was coming to ’em.”  As I noted in my Leg 3 recap, if I had to hear any more gloating or bragging from Misti & Jim, I was ready to say some harsh words.  Thankfully, that no longer has to happen as Misti & Jim had a reallllly shitty leg.  They happened to do almost everything wrong and those errors let every other racer go right by them.  It was glorious.  I’ll be fair though – if this leg’s performance was enough to humble Jim and he accordingly acts just a tad less annoying, I’ll happily cheer them on as they are a great team.  You’re on notice, Dentists! 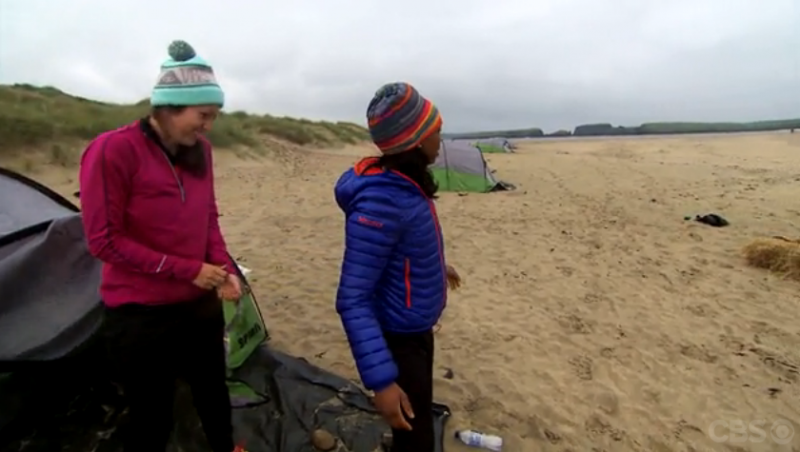 There was some impactful travel planning made in this lead-up to Copenhagen that helped establish the way the race would finish. After a night spent on the beach at St. Ninian’s Isle (which sounds like it could have been kinda cool!), the racers had to leave the Shetland Islands and head towards Aberdeen by ferry.  The decision for all the racers was how and when to book the flight from Aberdeen to Copenhagen.  Misti & Jim booked online before leaving the Shetland Islands, while every other team decided to wait until getting to Scotland.  Even then, some teams went for a travel agency there while some went directly to the airport.  When all was said and done, Kym & Alli managed to get the best and earliest flight by at least 2 hours, while the remaining teams were all within an hour or so of each other. 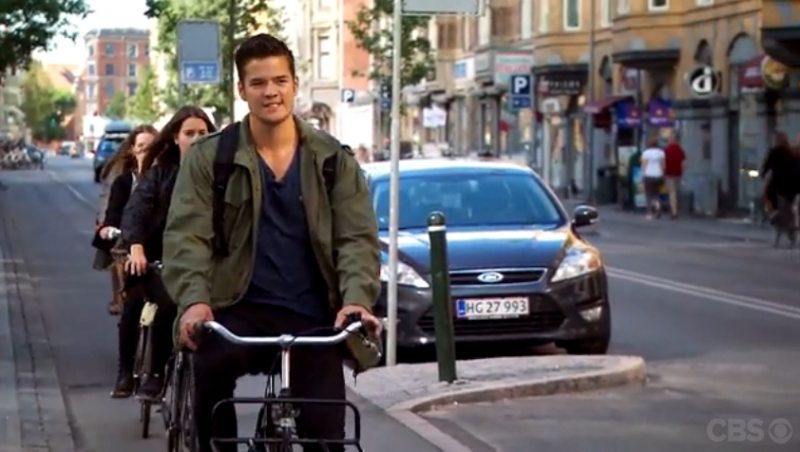 So it seems there are just cute men riding around on bikes out in Copenhagen.  Note to self: Plan trip to Denmark stat! Anyway, let’s focus on the task at hand. 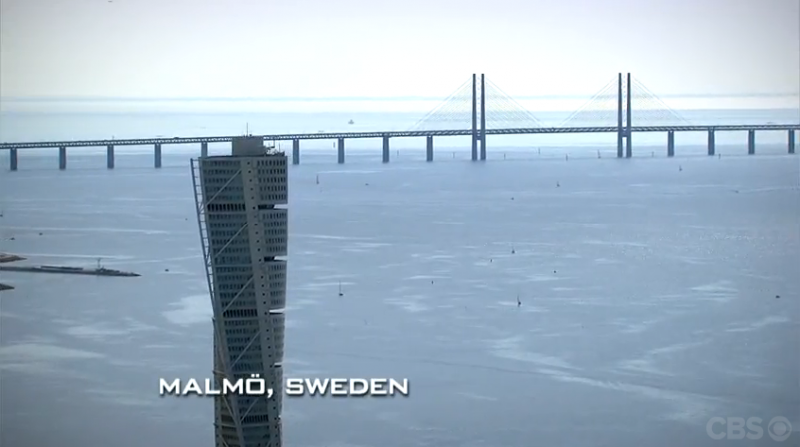 The racers first had to cross this pretty impressive span and leave Copenhagen briefly for a swift jaunt into Sweden.  The task was to drive efficiently in their Ford Cmax Energi (which Larry is now eyeing as a possible car purchase in the future) and use less than .10 gallons of fuel.  It was doable if you minimized aggressive accelerations and about half the teams figured that out. Doing so was an advantage as you avoided having to do a “task” of naming the Scandinavian capitals…seriously, how do people not know some of 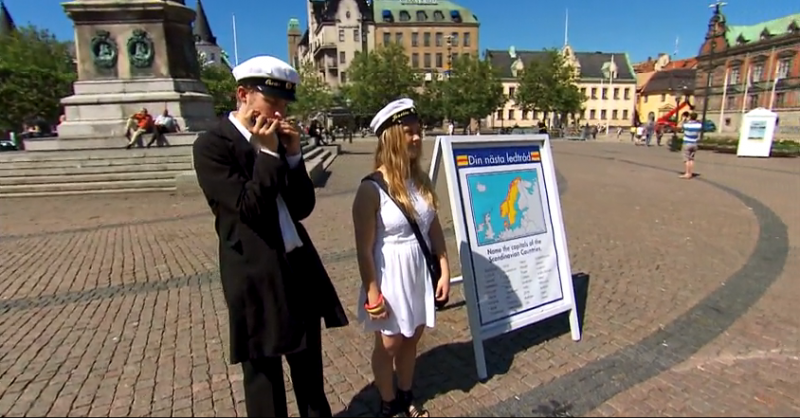 this stuff?  I was happy that at least Te Jay could list the capitals without looking it up, although I guess he does have the benefit of being a flight attendant to hopefully help. 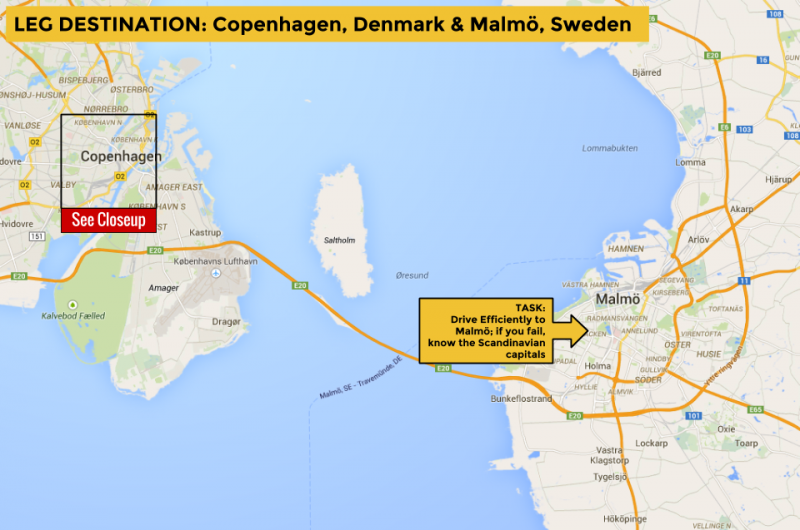 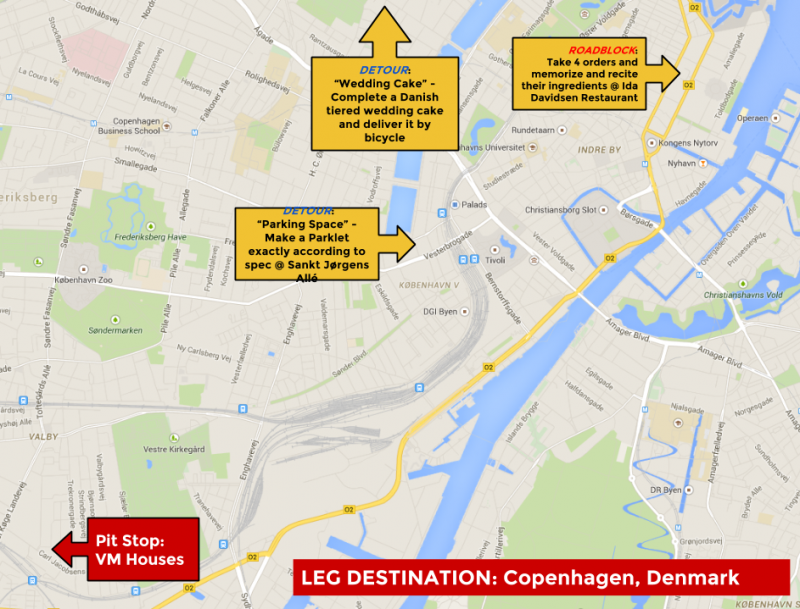 Back in Copenhagen, it’s Detour Time!

Once you got past the Efficiency / Geography Challenge, it was time to head back into Copenhagen for the meat of the leg.  First up was the Detour, which gave racers the choice between “Wedding Cake” or “Parking Space.” 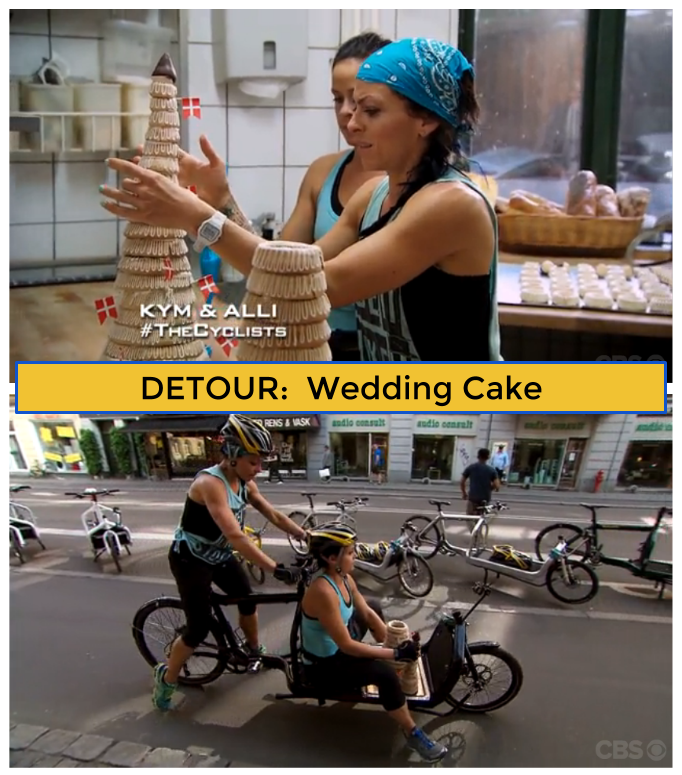 I think Wedding Cake proved to be the best option but you had to have some athletic capability along with serious patience.  We kept seeing the ones who did this option realizing there was no way to keep that cake intact.  Also, attention to all the pieces was vital.  When Misti & Jim changed Detour tasks to this one, they misplaced one of the Danish flags which required them yet again to backtrack.  Kym & Alli freakin’ rocked this although they did have that one moment when they didn’t have their delivery slip – and amazingly, it was on the sidewalk and they FOUND IT.  Good for them! 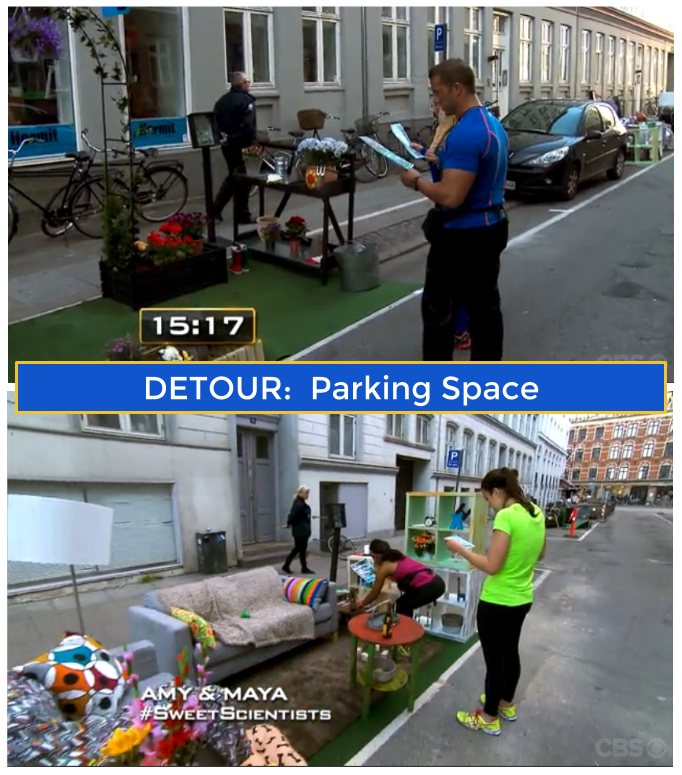 The other option, Parking Space, required a very keen eye for detail.  If you chose what looked like the simpler theme (the outdoor garden), you had to pay attention to that cursed flower pot and its petals, as one side had 7 petals and the other had 8.  It made a difference. 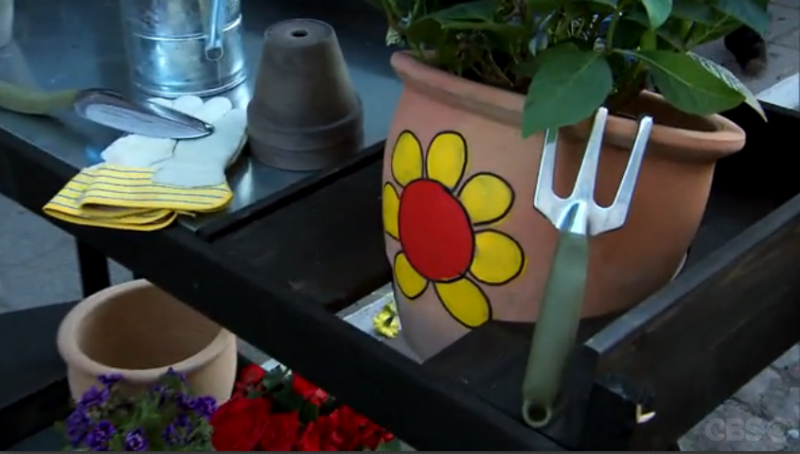 If you ended up selecting the messy living room, it seemed there wasn’t a corresponding “tricky” element that could be as easily overlooked.  It was here where Misti & Jim first made major stumbles in missing that flower petal.  I wonder if they had a chance to realize their mistake before seeing it on TV? 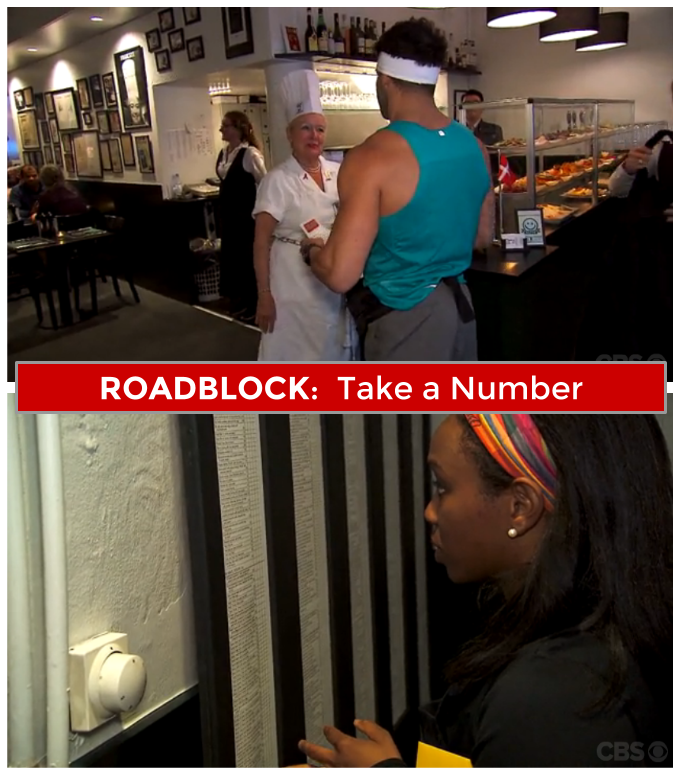 I’m happy to finally see a Roadblock again, what with the last two legs not having one.  It really is a vital piece of the competition as it forces one person to take on the stress alone, possibly making or breaking a team.  Here, a racer had to take 4 orders by their #, and then correlate that number with its associated ingredients, and then recite the order to the main cook of the Ida Davidsen Restaurant.   Straightforward, but it did require some patience and memorization.  Most did pretty well, but here yet again was where Misti & Jim messed up.  Misti did the Roadblock for them and ignored the part of the challenge that required you to list the item’s # first and then the ingredients.  So literally, they messed up every task in this leg.  Every one.  Your hope to be the most celebrated team in Amazing Race history is over at this point as you can’t claim that title and expect to have a leg of complete failure to be ignored.

And Finally, the Pit Stop at the VM Houses 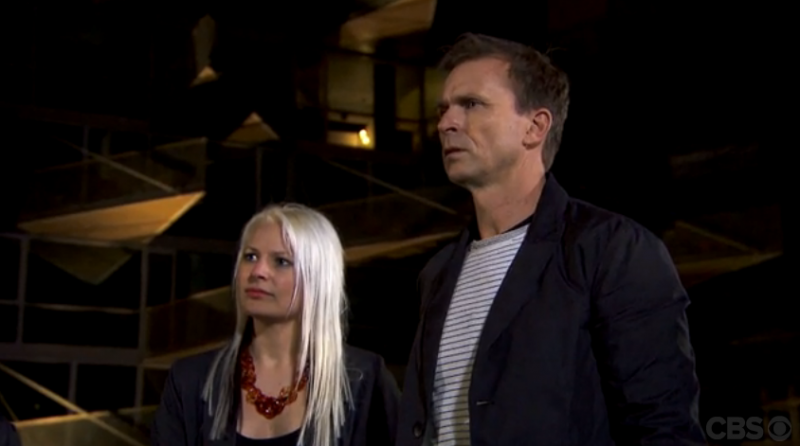 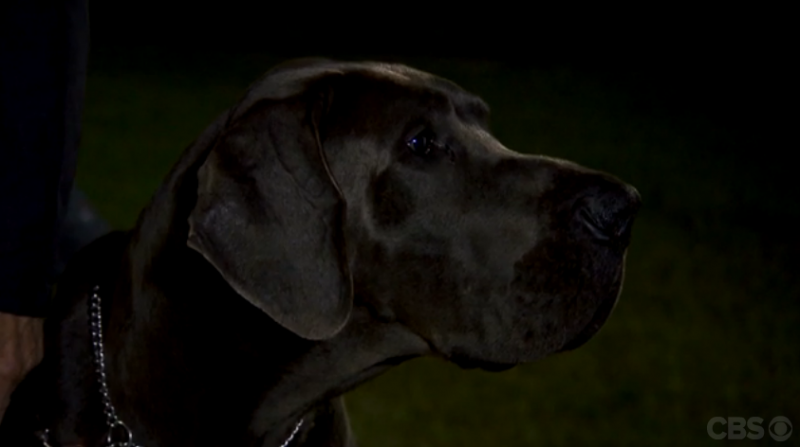 That dog was too adorable. 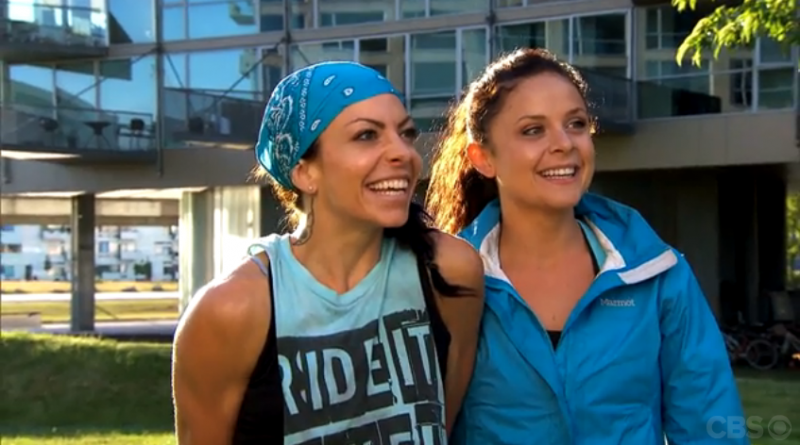 Anyway, the winners of this leg raced strong and were rewarded accordingly, having made up from a 7th place finish in the last leg.  It helped to have such a great lead, as certainly when the other teams are nowhere around, you get a sense of security.  I think Misti & Jim know full well that to be out front removes a lot of stress and helps you stay in front.  Once you’re in the chaos of “the pack,” you tend to panic and make mistakes.  As of now, I would not mind a Kym & Alli win – they’ve got great attitudes and a truly competitive spirit. 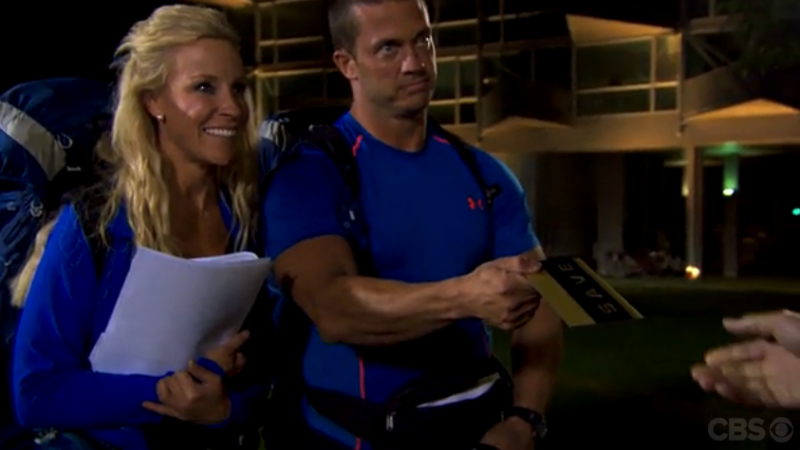 And on the other end, our superteam ends up in last place, but immediately handed Phil “The Save” to make sure they stayed in competition.  But stupendously for them, this was a Non-Elimination leg and THEY GET TO KEEP THE SAVE.  That’s some bullshit, I think.  They used the power – it should be like using a Survivor Hidden Immunity Idol.  If you use it and you didn’t need to, then too bad so sad.  So yeah, I’m annoyed as fuck that these two get ANOTHER Race Save.  Bull.  Shit. 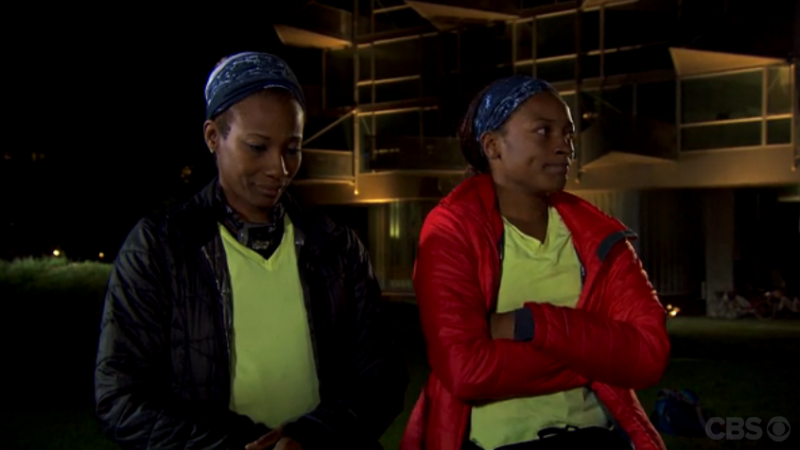 One last thing….Nici?  Knock off this childish bullshit.  You’re a grown-ass woman.  ACT LIKE IT.  I thought Shelley showed remarkable grace in that she was letting Nici flip the fuck out without tearing her a new one.  I hope Nici gets some perspective on this and learns or grows from it.  I know she’s still fairly young and when you’re in your 20s still, you’re still an idiot.  It’s the truth.  But damn. 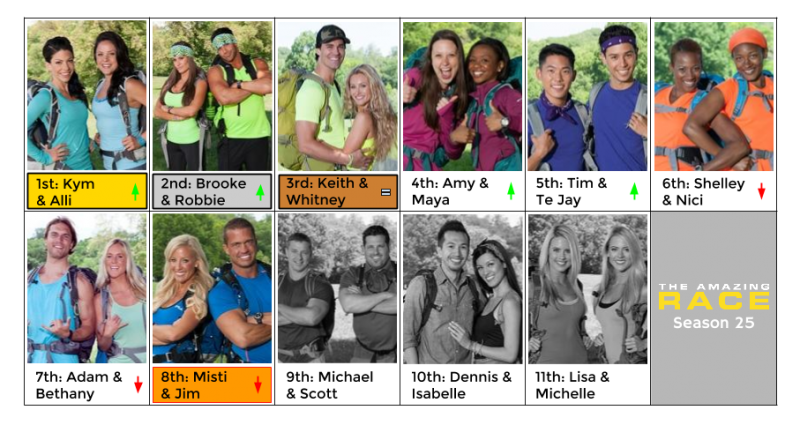