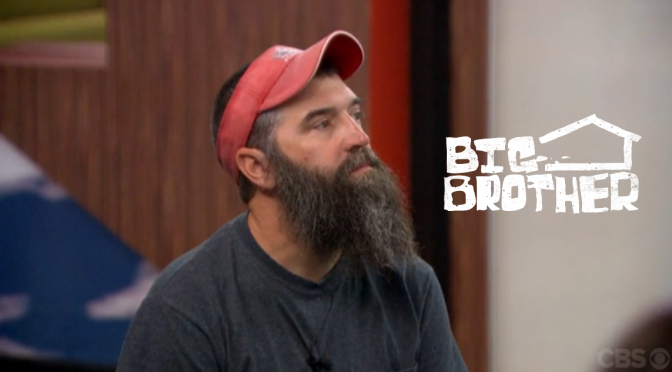 Well, I’m not sure that the “Skittles Strategy” worked out all that great for The Detonators + Caleb, but damn if it all didn’t work out for Mr. Teflon, Donny! Â How great was it to see Donny evade The Detonators yetÂ again? Â  He’s forcing them to have to cannibalize their own and it is definitely forcing any existing cracks to keep getting bigger. Â It’s time to unpack this episode…. 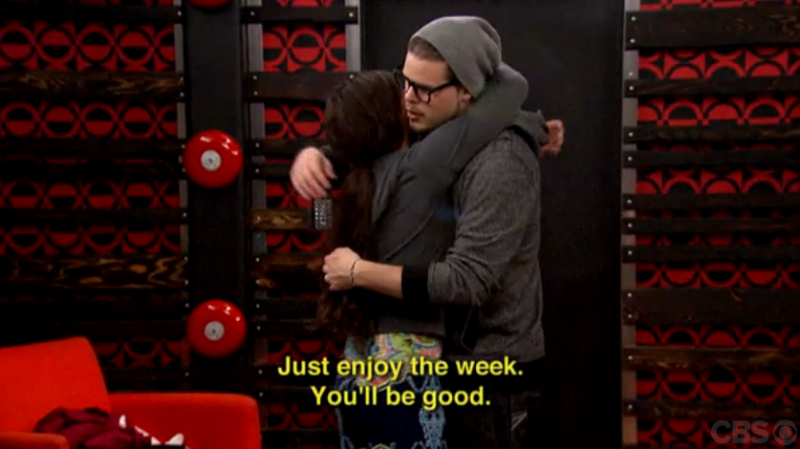 Immediately after the HoH competition, it’s time to scramble and figure out who is going to go up on the block. Â Derrick tellsÂ us though that even if Donny and Victoria are the easy targets to put up, he’s got different plans. Â Notably? Â Victoria is under his protection. Â He even tells everyone else in the Detonators that he doesn’t think Victoria should be targeted this week, and everyone actually is fine with that.

Let’s jump ahead to a bit later in this episode as to WHY Victoria got this protection. Â Victoria believes it’s just that Derrick is protecting her – alas, that’s FAR from the reality of the situation. Â The Detonators are already thinking about saving up reserve targets for backdooring and Victoria is the backup in case the primary target, Donny, saves himself. Â Sweet, useless Victoria…. 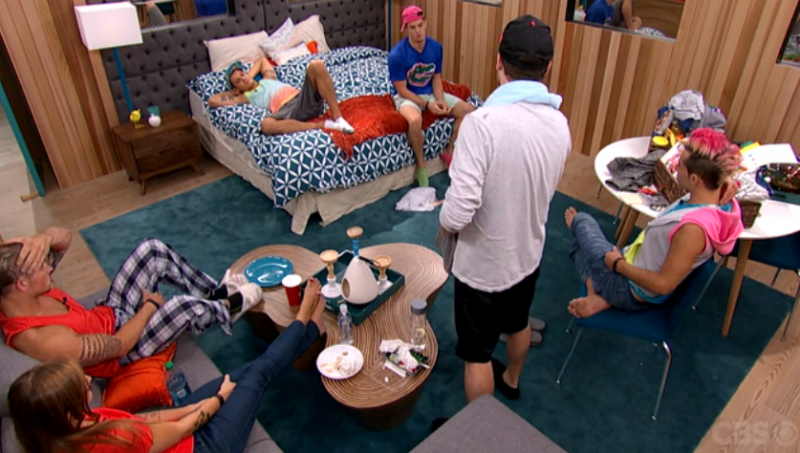 The Victoria element is discussed and agreed upon by the Detonators, but when it comes time to put up or shut up about the nominations, everyone’s silent. Â All have learned from Zach’s little outburst back in the Devin days when Zach earned himself a target for having the nerve to speak up. 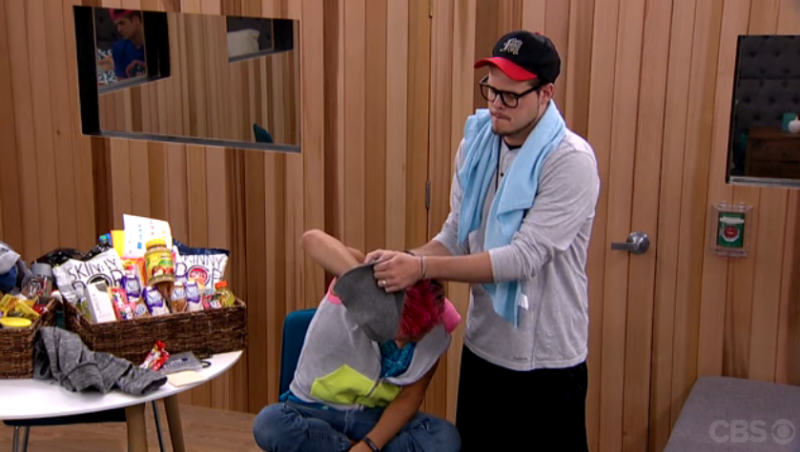 Caleb is pretty blunt about the fact he has volunteered to go up numerous times, bringing up that he even went up for Nicole (and continuing the lie told to Christine about why). Â Cody is conspicuously not volunteering, which sets off Caleb’sÂ alarm; Frankie has also come to the conclusion that Cody has been avoiding a lot of drama too. Â Derrick does great earlier in the episode in terms of deflecting heat from Cody, but now in the Skittles Summit, Cody can’t hide. Â No one budges though, so a tossed-off suggestion by Frankie to pick Skittles from a hat is seized upon by Zach. Â The group reluctantly agrees to use this method, much to everyone’s amazement.

So Zach, Caleb, Cody and Christine each get assigned a color, and a corresponding Skittle is put in Derrick’s hat. Â I really REALLY thought Derrick was going to try to hook Cody up with some candy-palming techniques but apparently he wasn’t feeling adventurous! 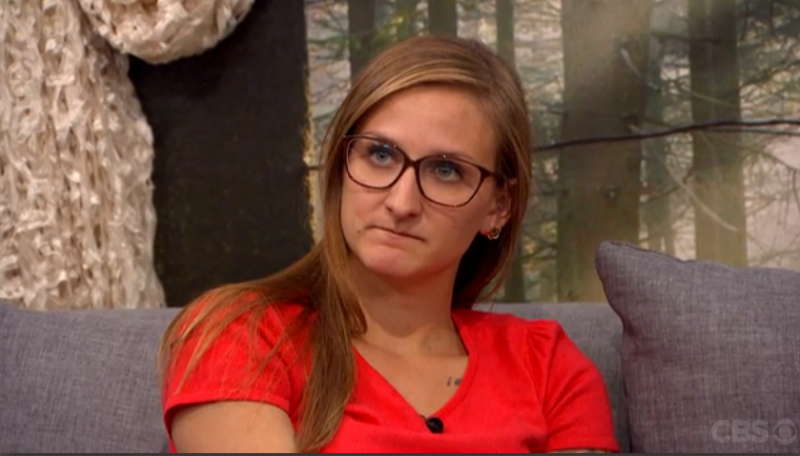 So Frankie picks the first Skittle which will determine who will sit next to Donny and who will be entrusted with throwing the Battle of the Block competition to ensure Donny stays on the block, and thus evicted. Â Christine’s Skittle is picked, and her face speaks volumes. 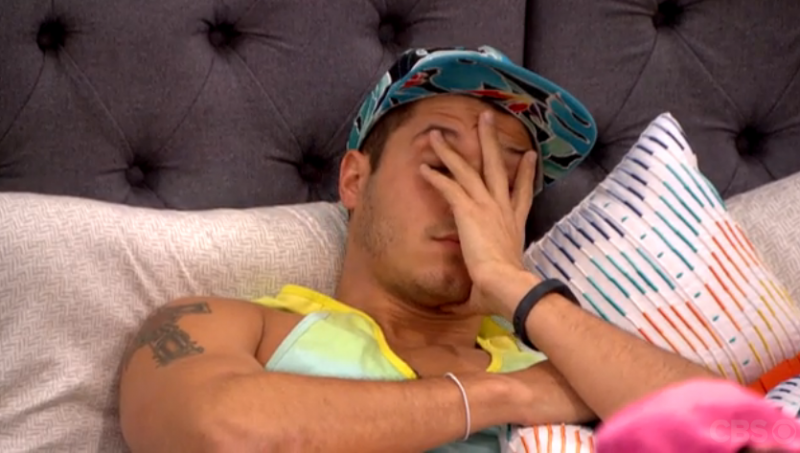 Next chosenÂ is sweet, under-the-radar stud Cody, who finally emerges back into the plotline of the show again. Â Oh, poor guy, has to actually do something in the game besides look hot and flirt inappropriately with Christine? Â Suck it up, buddy. 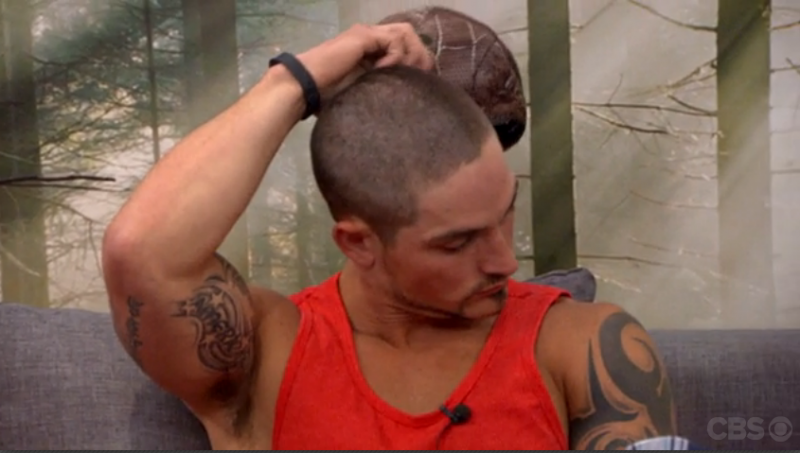 “Bomb Squad” member Caleb is the last chosen, meaning he and Cody are going to be nominated by Frankie against Christine and Donny. Â Again, he’s less than pleased to be back up AGAIN. Â Although you’ve got think he’s feeling pretty good with his chances, competing with Cody. 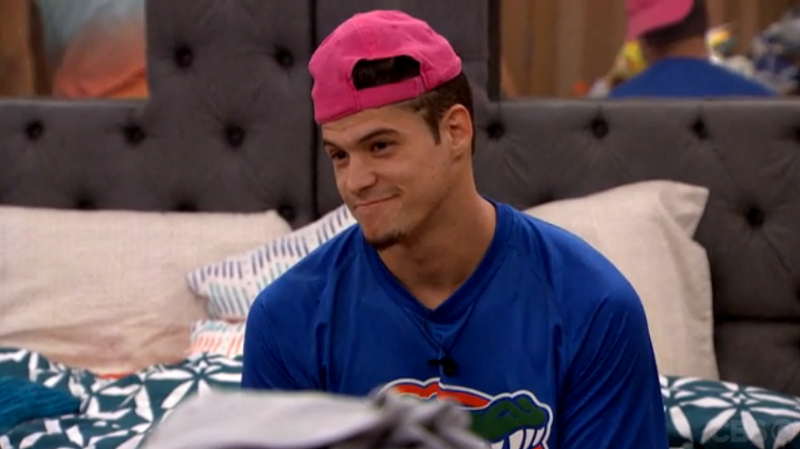 You know who was fucking thrilled to be un-nominated? Â ZACH ATTACK, bitches. Â Gotta love this guy’s confidence and arrogance! Â He knows the score well enough, though, and the fact that everyone would take him out in a New York-minute if given the opportunity due to his unreliable actions from previous weeks. Â Zach is certainly counting on Donny going out this week though, as him being eligible for backdooring is certainly there!

Execution of the Nominations-by-Skittles-proxy Plan 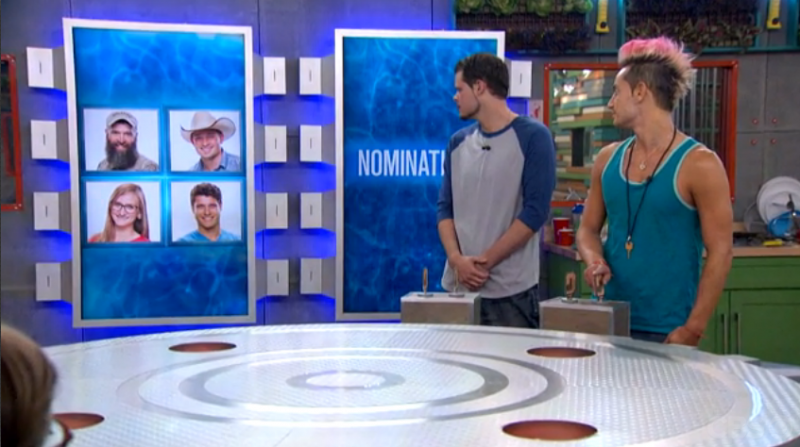 With the Skittles having been drawn, the Nominations were apparently no longer an issue. Â I would have loved for there to have been a surprise revolt against this group, but that’s not happening at this point. Â Soon? Â Oh yeah, very soon. Â You know it’s coming. Â But for now, the Nominations stayed as per the Skittles. 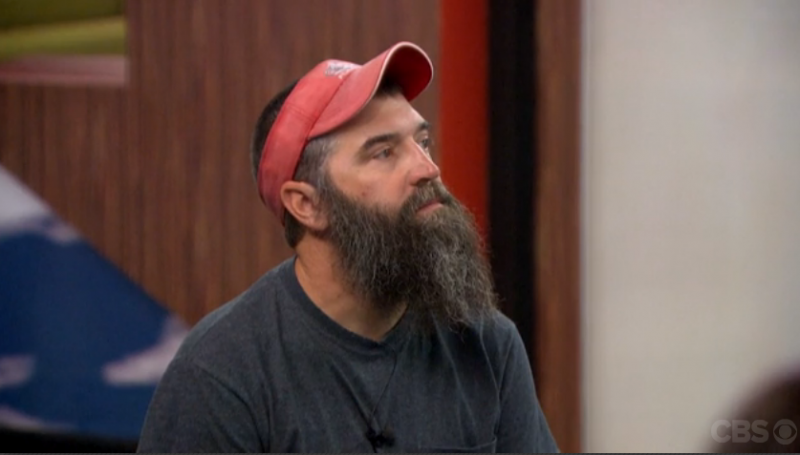 You know who is over this shit? Â Donny. Â You can see it in his eyes – he’s tired of these fucking juveniles playing their games and ostracizing him…BUT, he’s not even about to quit. Â I respect the shit out of Donny’s perseverance, to be honest. Â I had no confidence in his ability to “pull a Frankie” though, as I figured whatever was coming in the Battle of the Block competition, Christine would make sure she sealed the deal to keep Donny on the block.

Guess who also had some need to take his shirt off after getting nominated? Â THIS hot mofo. Â DAMN Cody. Â Seriously, take a page from the Caleb Playbook and flaunt yo’self. Â I loved that the Team America mission included taking your red sweatshirt. Â Good riddance to that. Â Burn it!

Â The Battle of the Block, Week 8 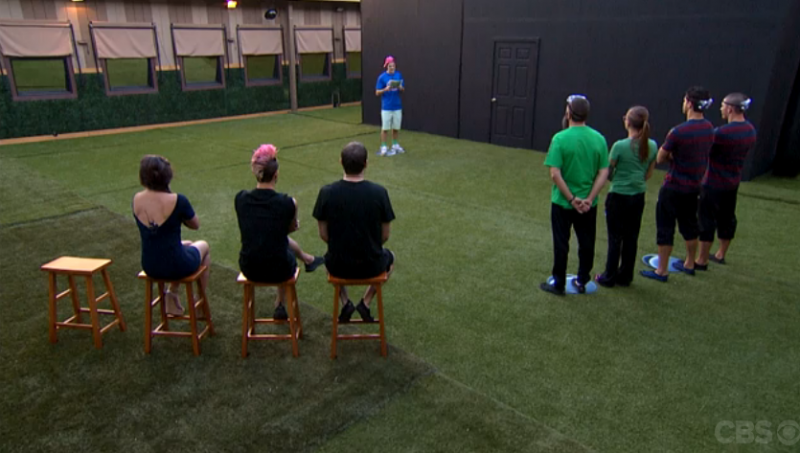 This challenge brings back the pitch-black competition we’ve seen in past seasons where the contestants have to find hidden items in the dark. Â In this iteration the houseguests had to find 5 bones and place them in a designated receptacle, with the knowledge that not all bones found would fit. Â Also, each person could only take one bone at a time (so to speak – bwahahahahhahaa!).

The houseguests were all set to execute their plan, with Christine particularly thrilled because how the hell could DonnyÂ know she was throwing it? Â It really was a pretty good situation to be in if you were actively there to throw it. 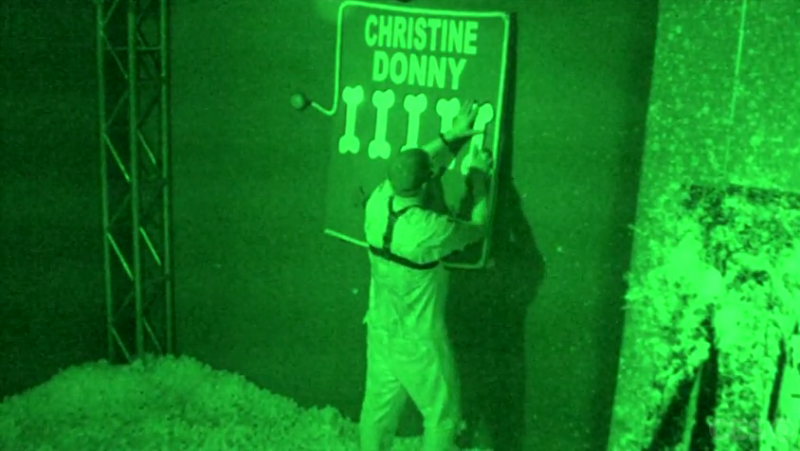 Muthafuckin’ Donny!!! Â Not only was he working alone due to Christine doing nothing to help him, he beat Caleb & Cody with Christine actively trying to help Caleb & Cody. Â You can not count Donny out! Â It may have made more sense to focus on backdooring Donny instead of having Victoria take that role.

For viewers, this kind of upset is thrilling. Â As Cody notes, this is now the second week in a row where throwing a competition completely blows up in their face. 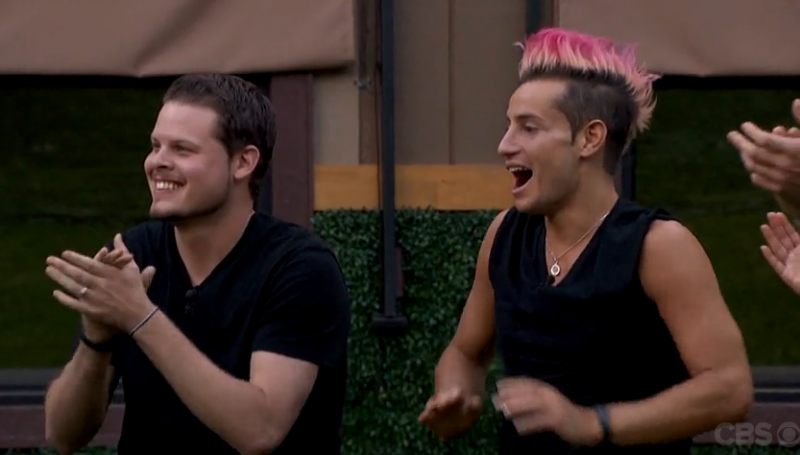 Not only are Cody and Caleb still up on the block, Derrick is also deposed, exposing him as a potential replacement nominee. Â Had to love Frankie and Derrick doing their best to cheer when Donny and Christine emerged from the chamber and indicated they won. Â  All their plans just went to shit.

I honestly think there’s a possible worst-case scenario in the cards for The Detonators: Â if Victoria somehow SOMEHOW manages to win Power of Veto, they are FUCKED. Â No matter if she keeps the nominations the same or decides to use it on someone, another Detonator would go up. Â Now of course, as hinted at above and as shown in actions this summer, Zach would be a very likely replacement nominee. Â He’s got to know that too, so Zach winning Veto is ALSO a terrible-case scenario for them, as he’d likely not use it either, knowing that while Victoria isÂ supposed to be the replacement nominee, these guys have gunned for him before. Â This week is looking to be very interesting yet again. Â And Bravo, Donny!!! Â And to Derrick, I wonder if you could somehow end up getting screwed over by this turn of events? Â You’re playing a wonderful game, but it hinges on things going your way. Â The odds of things not going you way increases more and more! 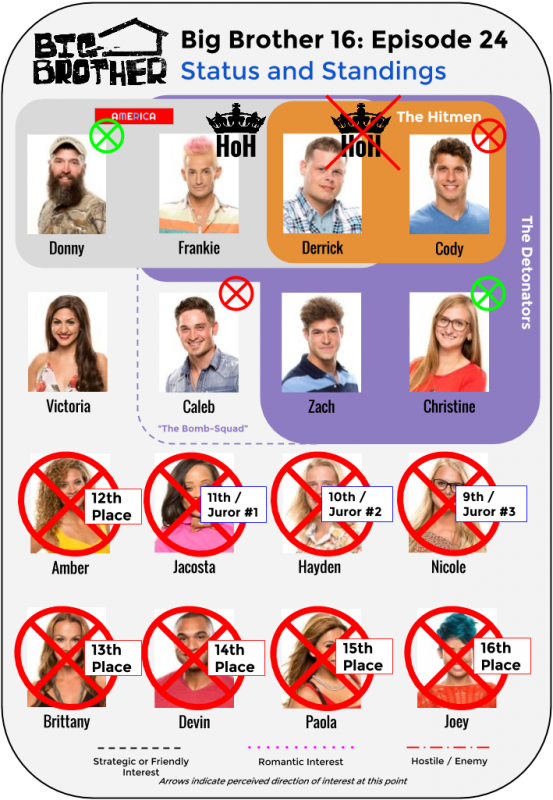 I had to draw in “The Bomb Squad” since The Detonators really are using Caleb perfectly. Â He’s a perfect weapon to have at your disposal. Â Just be sure that the weapon doesn’t backfire on ya.