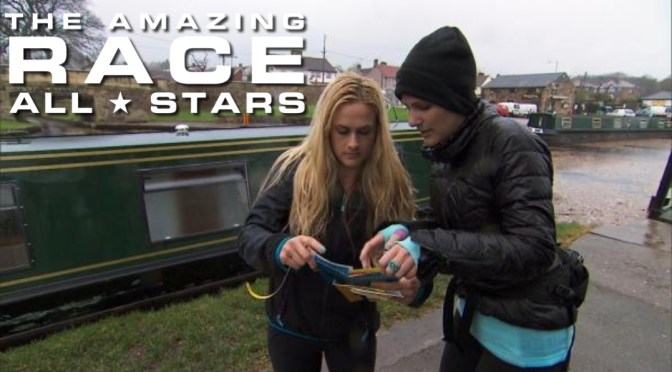 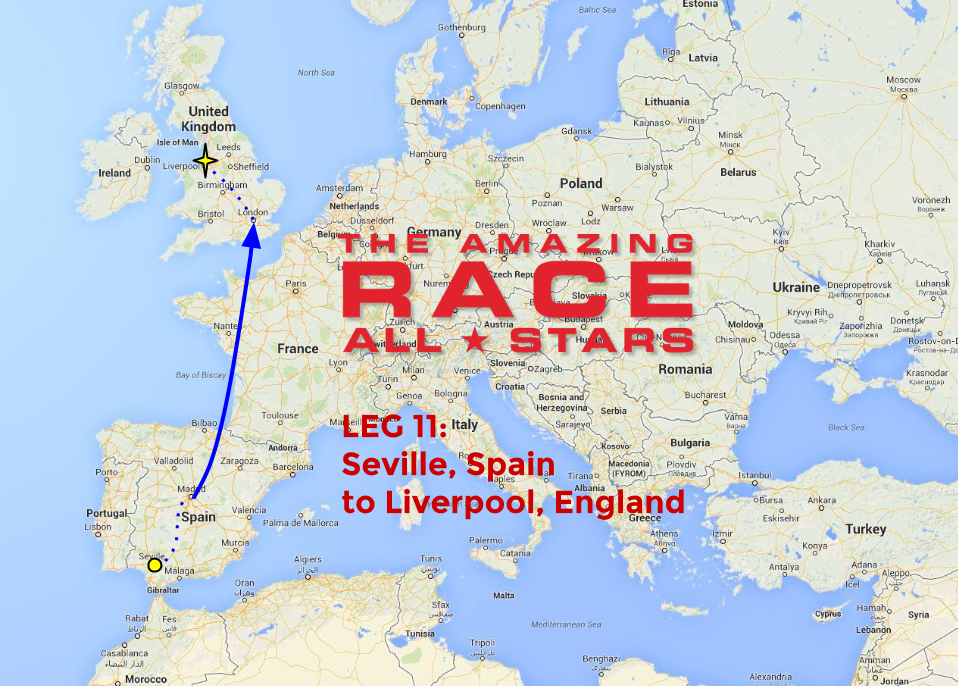 I’ll admit right now, that I did not have any hopes for the Country Girls (Caroline & Jennifer) in the back half of the season.  I openly mocked their capabilities and chances at sticking around after most of the other “chaff” teams were weeded out.  But hey, look at this….they’re still here, and even more, they’re here because they’re racing pretty damn good.  And there are no more chaff teams around to attribute that to – hell, in these last two legs, Jet & Cord and now the Afghanimals have been eliminated.  Could you say that each team was the cause of their own elimination?  I’d certainly argue that was a huge factor.  But impressively, Caroline & Jennifer just aren’t self-imploding or making major mistakes.  So here they are heading into the Final 3 while objectively “stronger” teams are falling by the wayside. It’s really intriguing. 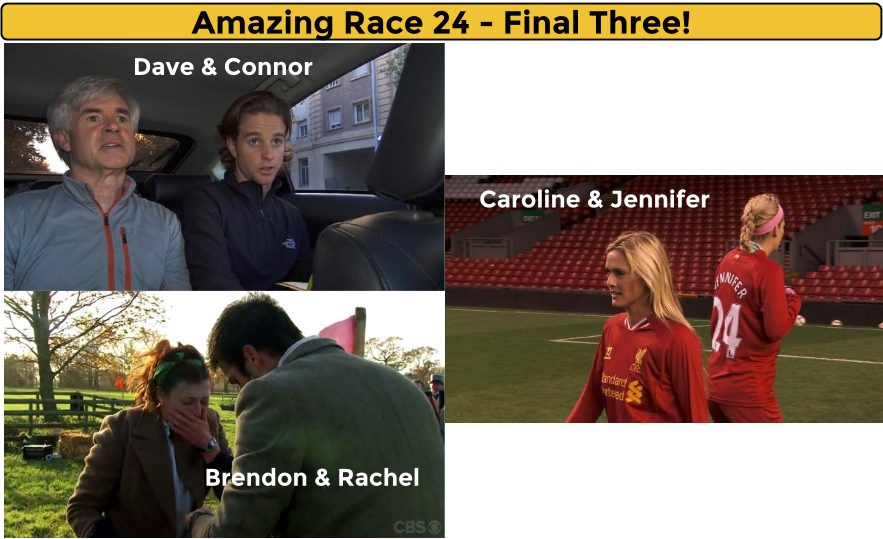 I never would have picked these three as the final teams racing to the Finish Line.  I wouldn’t have given Dave any credit as I don’t know I was that impressed with their performance their first season.  I NEVER would have picked Caroline & Jennifer to make it to the end, and they certainly benefited (twice) from the Non-Elimination Leg, but hell, it’s a facet of the game and they benefited from it, just like the U-Turn is a part of the game.  And Brendon & Rachel?  I think I would have called them in the final 3 – they’re so damn competitive, even if not the most congenial!  I’m excited for the final leg as I don’t think there’s a clear frontrunner.  Dave & Connor certainly have the most wins under their belt this season, but they’ve had plenty of their own problems this season and if those creep up in this last leg, another team could swoop in! 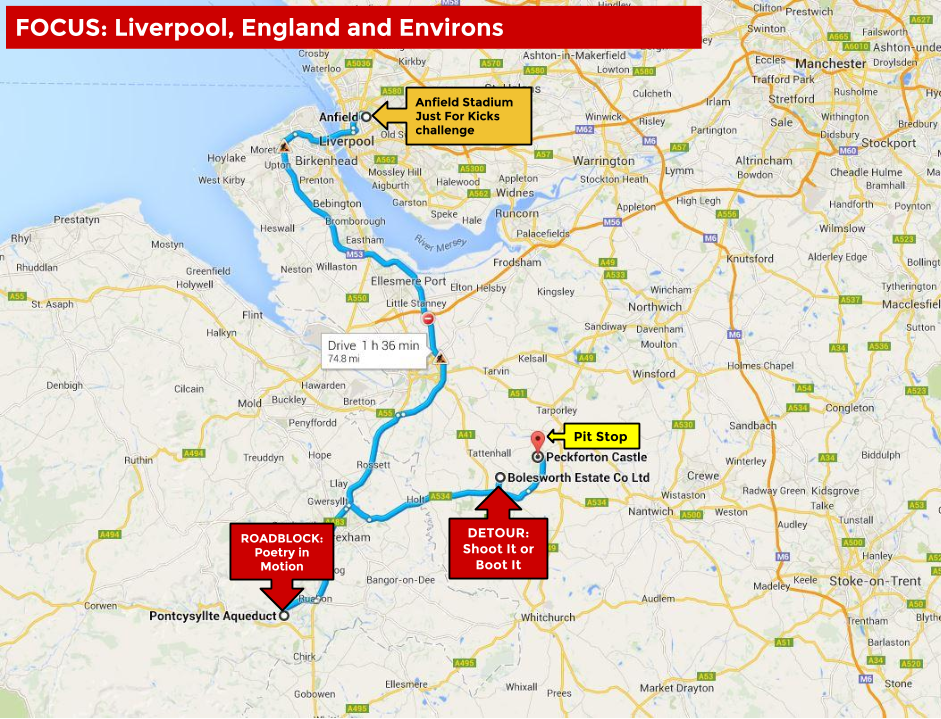 Anyway, let’s talk about this leg, Hobie!!  It was dreary weather but that’s to be expected in England.  I was excited that the initial destination was Liverpool and was hoping that the Beatles would be a part of the race, but I can’t say that I was disappointed with getting to see the Downton Abbey side of things too! 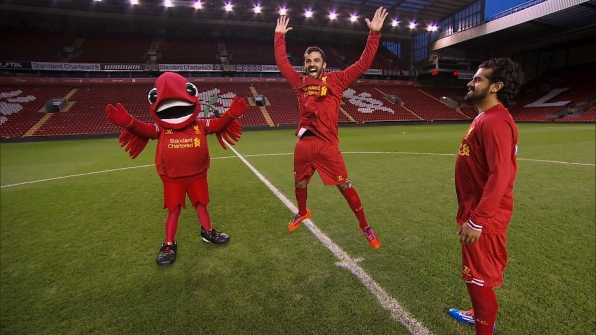 The soccer challenge at Anfield Stadium in Liverpool was entertaining… the Afghanimals’ enthusiasm was infectious, but c’mon, let’s recognize that there was a goalie there that was supercute.  Super. Cute. 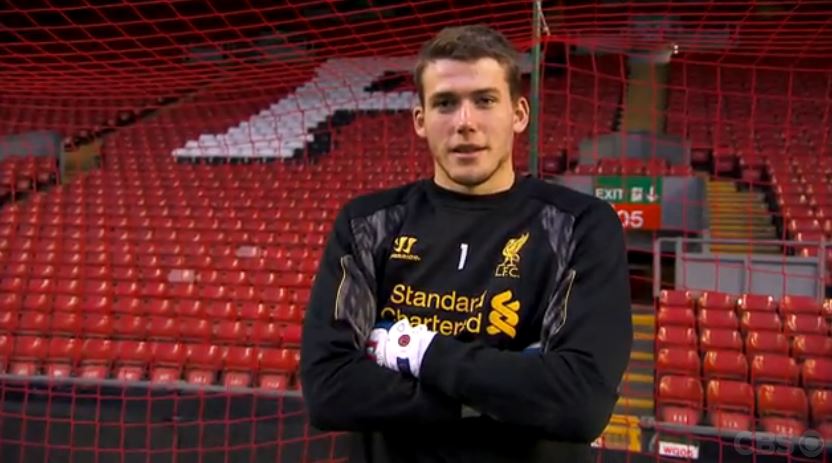 What were we talking about?  Oh yeah, the soccer (football) challenge.  So yeah, the Afghanimals had initial good fortune by getting done first, but after that, their game went to hell as they then get lost on the way to the Roadblock at the Aqueduct, getting passed by other teams; then of course, Jamal has some problems getting done with the poetry recital, finishing up third there with Connor finishing right after him. 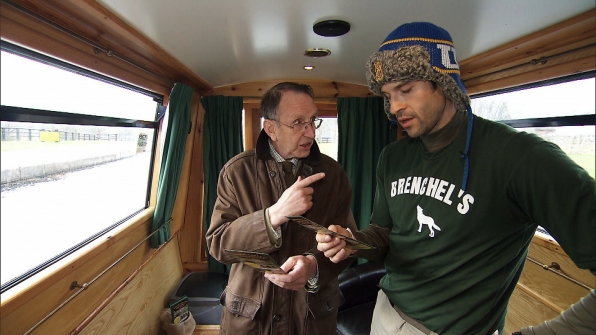 The Roadblock: Poetry in Motion

It was here at this challenging (but beautiful – I’d LOVE to see that aqueduct and ride the boat) Roadblock where Brenchel and the Country Girls helped finalize their leg, as both Brendon and Caroline knocked it out on their second try reciting the poem.  With that bit of leadtime on Dave & Connor and Leo & Jamal, Brenchel’s mistake at the Detour didn’t cost them the race.

This Detour was pretty awesome.  I was most blown away (pun intended) by Caroline’s insane shooting skills.  She was just taking those clay pigeons out!  On the other side, it was hilarious to watch how quickly Rachel freaked the fuck out when it was clear they had just wasted all their time doing the boot-tossing challenge using the invalid set of boots.  Luckily for them, it didn’t seem Leo & Jamal were ever close to overtaking them.  But if perhaps Brendon had taken longer at the Roadblock?  Who knows.

I was kind of excited for the Country Girls as I thought they had a chance at winning their first leg – but alas, they went right at the turn while Dave & Connor, who were right on their tail, went left.  Neither were sure if the direction chosen was the right one, and Dave & Connor ended up getting lucky.  Can’t wait to see how this all plays out next week!  Also, did you hear the news from CBS that Amazing Race is moving to Friday nights?  I hope that’s not a killing blow. 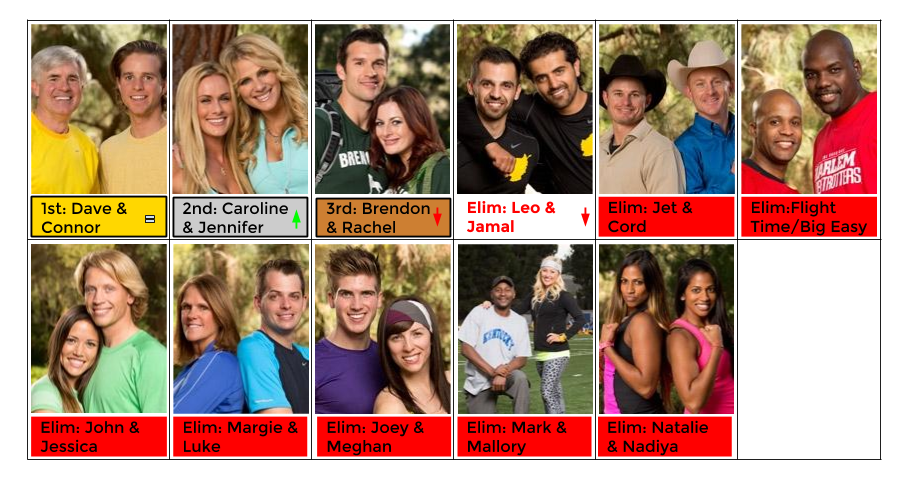 Overall Standings for the Race 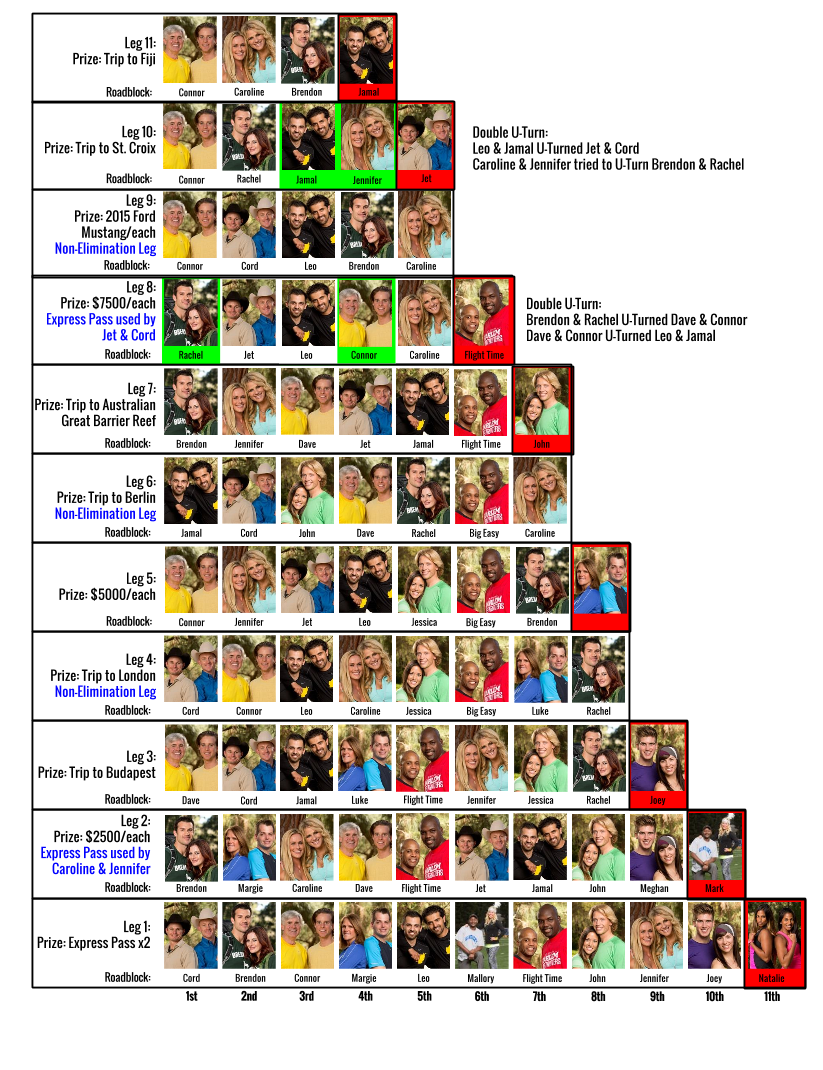