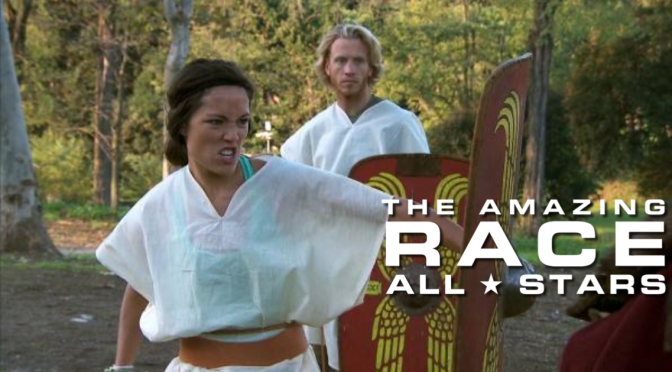 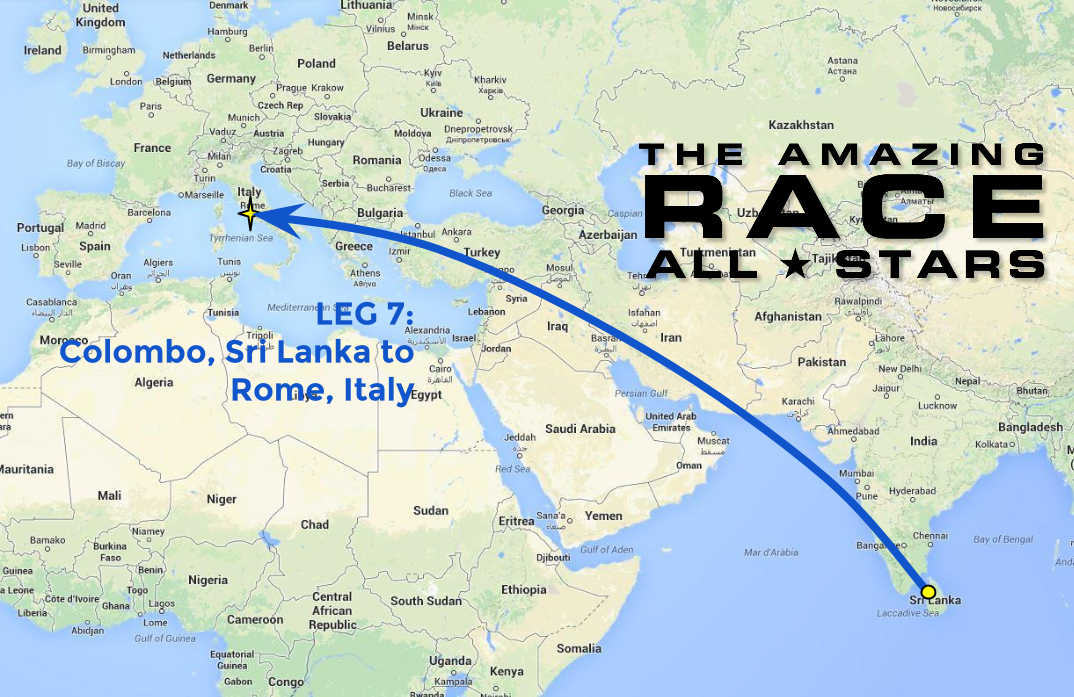 It was so wonderful to have The Amazing Race back on after two weeks of having to do without.  Thanks, Obama!  Even better, we finally got a change of scenery (Sri Lanka does look beautiful, but OVER IT) and that change was to ROME!   Oh, Rome.  Larry & I were drooling the entire episode as they went to places we had visited as well.  It’s a place I could see us happily spending many more days in as it really is just that wonderful.  I’d totally pull a Lily from HIMYM and try to live a year there.  I digress, but I do admit that the show was especially travel porn for me this episode.

The start of the leg was at the Mount Lavinia Hotel in Colombo, Sri Lanka and the trend of tricky clues kinda started here, as the teams were directed to just the “Eternal City” and to find “Hadrian’s Bridge” once there.  Eternal City should have been enough for most, and even though there were amusing guesses in cases when the teams didn’t know, no one ended up on the wrong continent.  I’m still waiting for that kind of massive screw-up to occur, but that would have to really be a season of pure idiots.

Once in Rome, Hadrian’s Bridge turned out to be the Sant Angelo bridge which lies in front of Castle Sant Angelo, one of the interesting places in Rome that also was a huge Assassin’s Creed 2 landmark.  Unfortunately we don’t spend much time there at all this season as it’s immediately time to move towards the Detour, located happily at the legendary Roman Colosseum! 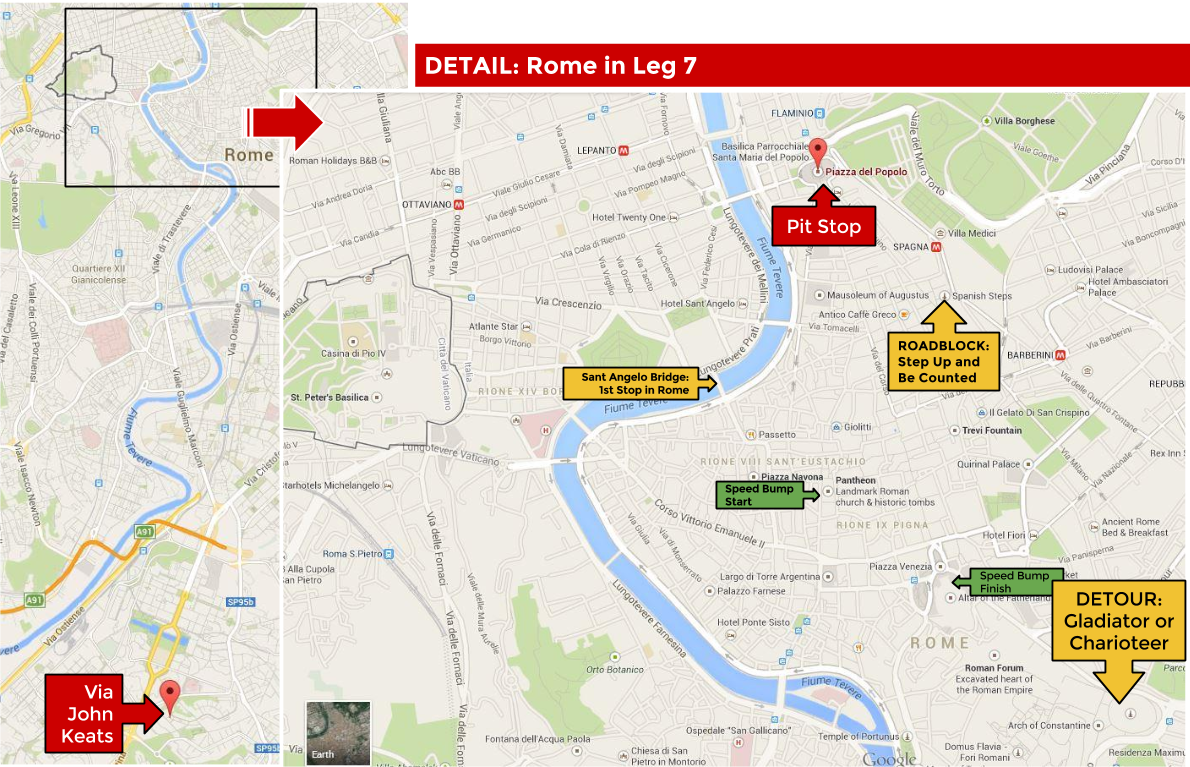 The Detour in this leg wasn’t physically demanding in either option, but it certainly required teams to focus on details (in Gladiator) or patience and teamwork (in Charioteer).  I was thinking that I’d have gone towards the Gladiator option as it did seem to be a bit more straightforward with the fake swordfighting routine being the only key to success.  John definitely ended up having problems when amusingly he was expecting Jessica to be the weak link, since he’s the martial arts aficionado.  The Charioteer R/C extravaganza was cute to watch but it was clear that as more and more teams were competing and racing, it became a nightmare.

The Country Girls had the Speed Bump to deal with before they could even tackle the Detour, and I was madly in love with the locales they had to visit during it.   They had to start at the Pantheon, an absolutely glorious and ancient piece of architecture that still can take your breath away.  After picking up the typewriter, they had to then find the building that resembles it, which is the Altar of the Fatherland at the Piazza Venezia.  It’s a great big hulking building which completely sticks out from everything around it, but it’s nonetheless eye-catching and draws you to it.  It’s a bit of a schlep though so I’m sure the Country Girls were exhausted once done. 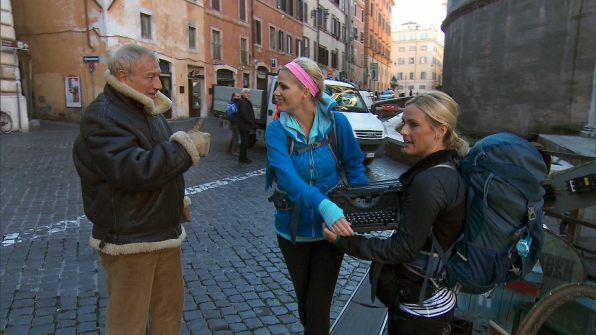 So after the Detour, the race was on to the Roadblock.  Alas, this was when the next tricky clue threw HUGE wrenches in some racers’ game.  It wasn’t explicit that you had to go to the Spanish Steps, as that would be pretty easy – instead, you were given information about a plaza where John Keats’ unhappiness exists.  Unfortunately for John & Jessica (who happened to be in first place after finishing their Gladiator Detour ahead of everyone), their cab driver killed their game when he insisted on interpreting the clue literally, driving them to Via John Keats.  In the map of Rome I provided above, you can see just how far out of the way this took them (as well as Jet & Cord and Leo & Jamal).  It’s ridiculously out of the way, and with that amount of distance and time wasted, it’s absolutely no surprise that the Country Girls overcame their Speed Bump and even managed to snag a 2nd place finish.  With Roman traffic, I’m surprised John & Jessica still aren’t in that cab!

Roadblock: Step Up and Be Counted! 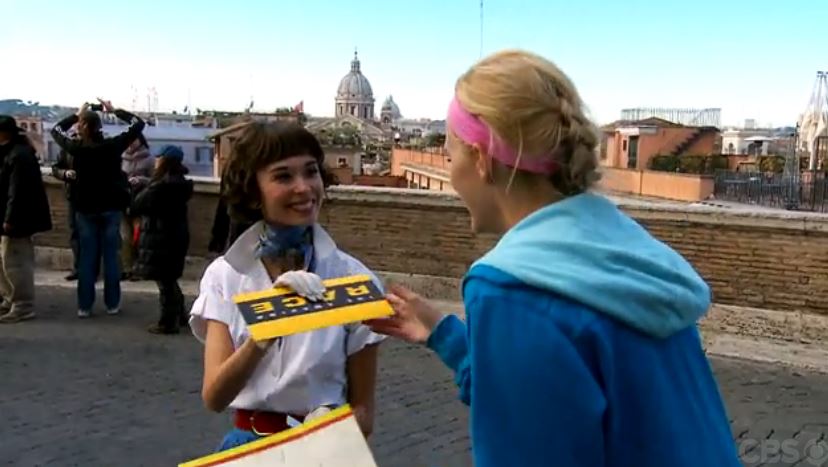 So the goal was to figure out that you had to not only count the # of actual Spanish Steps AND you had to add that figure to the date of the Spanish Steps’ construction AND present that result written in Roman Numerals.  Some of the teams got quickly into the task, asked for help from locals and tourists handy on the steps, and were on their merry way.  Others, like the Globetrotters, didn’t RTFC.  It seemed like John & Jessica, who disastrously finally arrived there last but while Leo & Jamal and the Globetrotters were still there, may have had a chance.  But while Jessica pleaded with Jamal to get the answer from him (all of them hoping or assuming the Country Girls were still behind them due to the Speed Bump) he ended up giving it to the Globetrotters as well.  SIDE NOTE:  Rachel’s earlier refusal to out and out help Dave & Connor find the Roadblock clue (just the clue box – not even the answer) seems to foreshadow next week’s continued antagonism by Brenchel to everyone else….on one hand, I’m all about racing for yourself, but needlessly making enemies at this point and in this situation is just bad politicking. Especially with a Double U-Turn coming up.

So it came down to a true footrace at the end – John & Jessica didn’t think it was the end, clearly, as Jessica seemed to be yelling at John just to fucking hustle.  I’m not sure they could have outraced the Globetrotters…it’s highly unlikely.  But I’m bummed they didn’t continue.  The Globetrotters, while having a great personality and a nice outlook on the race, are not terribly good at the race.  Obviously John & Jessica are NOT better than them but they’ve had higher highs so they felt like a more competitive team.  As you can see in the overall standings below, the Globetrotters have been in 6th place for the last 4 legs.  Consistently!

Anyway, next week looks intriguing – will the ugly side of Brenchel come out with a vengeance, and will they pay the price for it with getting U-Turned?  We shall see…. 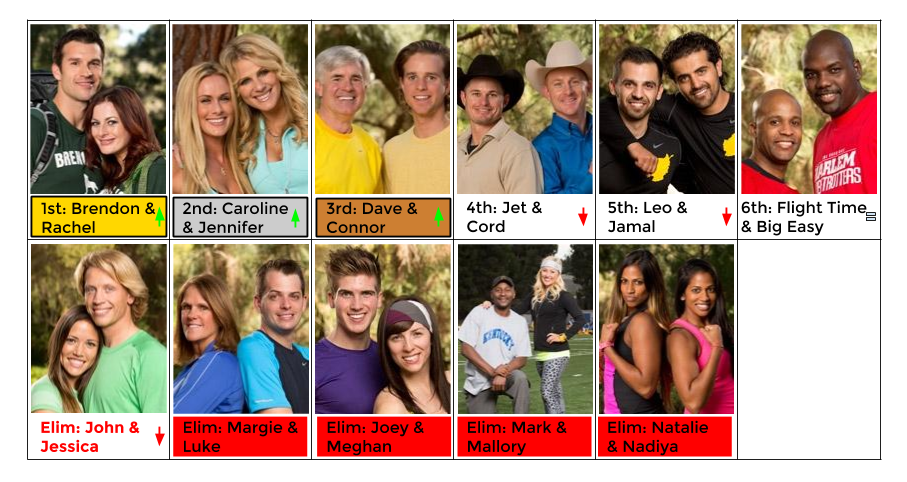 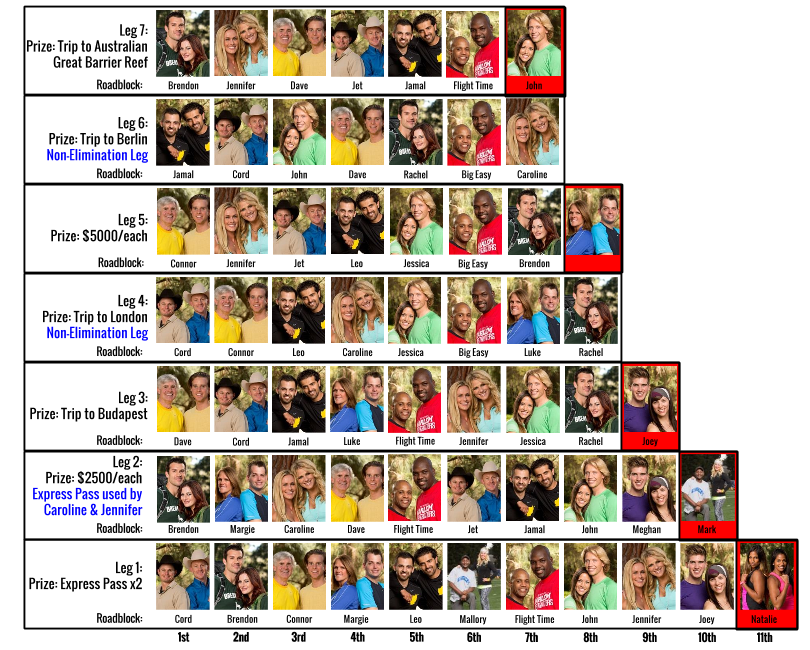