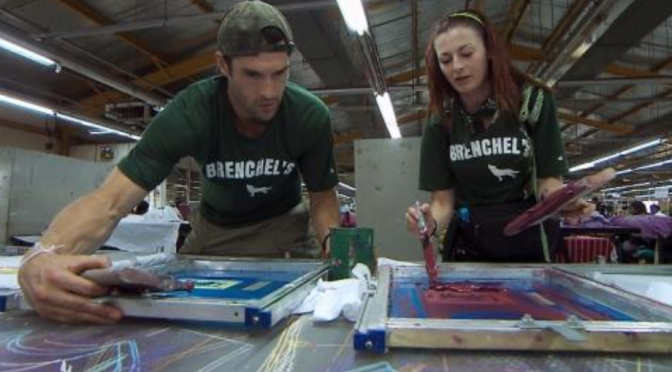 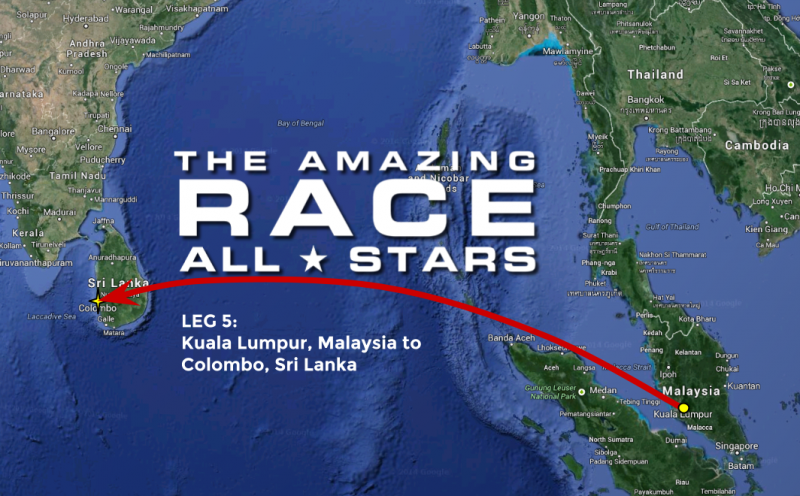 Well, it seemed Margie & Luke just weren’t able to get a break this leg, were they?  Their fatal mistake happened early on in the episode, when their taxi driver couldn’t find the travel agency and Margie & Luke decided to chance buying their tickets once at the airport.  I’m sure the Amazing Race producers HATE when situations like this happen, especially to only one team, as honestly, there’s no real threat to the main group of racers now about getting eliminated.  None.  So while nearly all the teams got on the direct flight to Sri Lanka from Kuala Lumpur, Margie & Luke and Brenchel were faced with different options.  Margie & Luke weren’t ready to take on the 30-minute layover option but Brenchel went for it, and definitely prospered for having done so.

As you can see in the route maps here, this leg had the teams cover quite a bit of ground for one episode.  After getting to Colombo and discovering it was an equalizer (except for Margie & Luke, who didn’t leave Kuala Lumpur until the next morning), erasing Brenchel’s temporary lead because the temple didn’t open until 5:45am the next day, all teams received the blessing then had to head to the train station. From there, it was a beautiful train ride south along the coast to the city of Galle.  It looked pretty nice, and hilariously everyone realized that this leg was all for the Twinnies!  In the bonus videos from the first episode, the Twinnies even asked Phil if Sri Lanka was coming up, but Phil couldn’t answer them.  I bet they were bummed to see how this played out!

There aren’t any readily available screenshots on the CBS site for this Detour, so no fancy graphic from me!  🙁  But the choices seemed like a crap shoot vs having some patience and skill.  The dancing, balancing, plate spinning one definitely favored teams like the Globetrotters, while Fishing Pole had the potential to be super quick, as long as you got lucky with your lure.  Jessica & John were that unlucky team who realized that they weren’t getting any bites and had to make the decision to change Detours.  Again, this had no stress involved as all knew Margie & Luke were out of the game.  But hey, it’s still a race for the first, and who wants to be last, even if there aren’t real consequences?

With the editing, it seemed possible that Margie & Luke’s flight arrived in Colombo while these teams were finishing up their Detours.  Who knows?  They still had the train ride ahead of them and that was lengthy – the show didn’t show how the teams all got back to Colombo though.  I’m wondering if they had to get back on a train as that’s quite a distance to travel, but it also did seem that the arrivals at the Trendy Connections Garment Factory were quite staggered.

Roadblock:  Go to Trendy Connections and make a shirt

Sounds easy – proved not to be!  It was at this point that the editing was very suspect, as they made it seem that possibly Margie & Luke had a chance, as they showed the various people having real problems making a shirt. 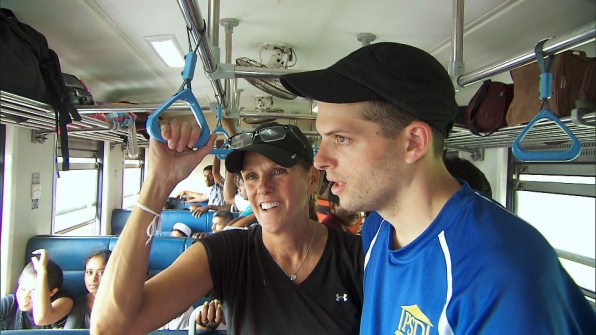 But alas, they were still heading on the train down to Galle….and we never even know what they ended up doing for their Detour or Roadblock.  Oh well.

Meanwhile, at the garment factory, alliances were formed and broken, entertainment was provided whether it was from Leo’s very amusing antics with the other workers or Flight Time demonstrating his prowess with a basketball. 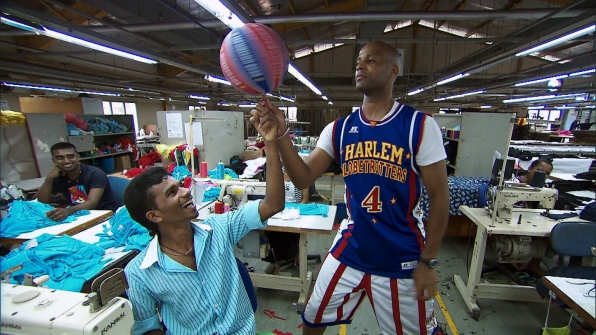 Despite Brenchel’s bold move early in this leg and succeeding at getting the lead, but getting equalized, they end up at the back of the pack yet again as Brendon encounters quite a few difficulties when trying to construct his shirt.  He wasn’t alone though as Big Easy also had problems.  It ended up being a surprising finish with that as while Brendon managed to finish ahead of Big Easy, Brenchel took a pedi-cab to the Pit Stop @ the Colombo Rowing club while the Globetrotters took the bus route, which seemed to be the quickest and most efficient way the teams used to get there.  And so Brenchel ended up in last place, with the exception of Margie & Luke.

Oh well – it did seem like a better race for Margie & Luke this go around, as Luke managed to not completely melt down and Margie seems even more calm and hell, looked better than she has in previous rounds.  I thought they could have lasted longer but with the few crappy decisions and breaks they experienced this leg and the last, it just wasn’t meant to be.  Who would have figured the Country Girls would pull out a 2nd place finish and without an Express Pass??? 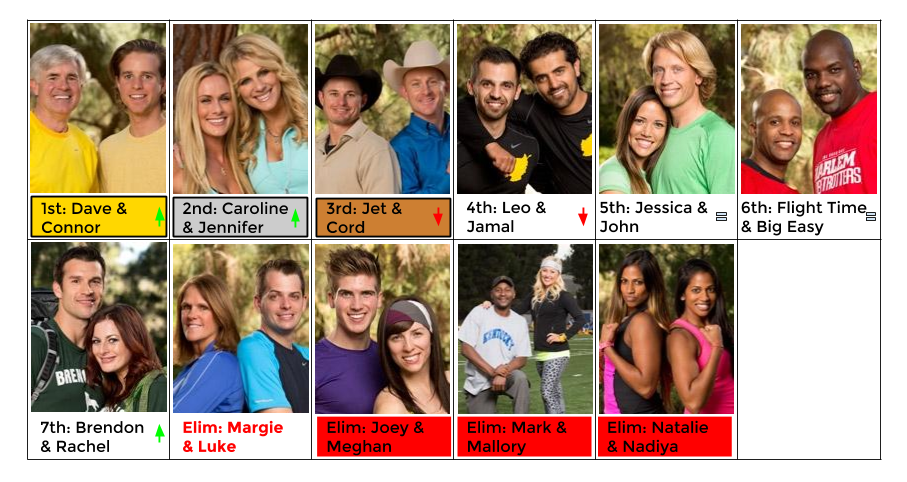 Â Overall Standings for the Race: 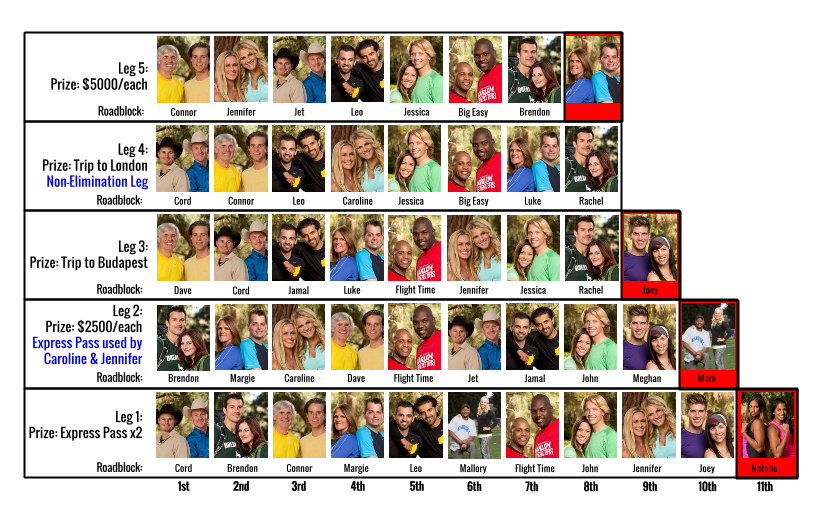