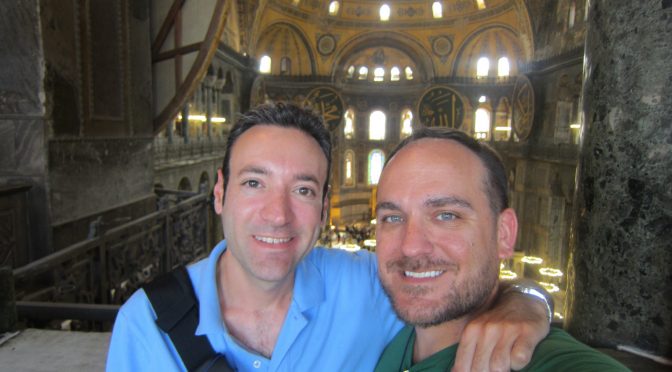 I will get all my photos up before the year is up, I promise (Edited on 22 Jun 2012 to add: LIES!)!  Some may have seen all of these already when I gave the iPad Photo tour of them, but if you didn’t get tickets for that event, you can always check my photos at Picasa.  I’ve attached your very own viewer to these photos right within my own site – power to WordPress and Themify (and Shashin)!

Alright, so I’m updating this entry on June 22, 2012 – yes, nearly 9 months later.  I completely forgot that I hadn’t posted “officially” about our trip on my site.  And I do love a travelogue blog post.  Who doesn’t, right?   Anyway, so on our cruise, the Equinox was staying in Istanbul for TWO days, which was pretty much perfect as there is a LOT to see in Istanbul.  On the first day, it was action-packed and we visited Topkapi Palace, the Cistern, Spice Market, the Grand Bazaar, and the Bosphorous by boat.  Day 2’s excursion schedule was only a half day as we had to be back on the boat in the early afternoon as Equinox needed to get on its way to Ephesus.

Day 2 was the money shot of this two-day excursion.  There were a bajillion tour groups from the boat, so in order to prevent too much overcrowding, the attractions were staggered amongst the groups.  It just so happened that the Blue Mosque and Hagia Sophia were grouped together on our agenda for the second day.  So I admit that I’m not running around telling everyone I see that the Hagia Sophia is one of those places that I’ve always been enamored of from a distance.  Every picture of it shows it off as this just MASSIVE crazy-looking building with towers and awesomeness.  The Hagia Sophia being in Istanbul was pretty much the deciding factor in us taking this particular cruise over one that just hit up the western Mediterranean.  Ssssh….don’t tell Larry.  So yeah, I couldn’t wait to visit it.  A year or two ago, I’d also had the chance to read a wonderful book on architecture called ‘The Secret Lives of Buildings’ which discusses, in interesting and personal ways, the histories of famed architectural marvels, including of course the Hagia Sophia.  It has such an amazing and lengthy history.  It was built originally as a Catholic church, then after the fall of the Roman Empire, it became a mosque for over a millennium.  It recently was “decommissioned” as a mosque by Turkey and became solely a museum.  Aw….geez, I already went off on the Hagia Sophia, and that wasn’t even the first thing we visited!

ANYWAY, we joined back up with our wonderful female tour guide and headed first to the Blue Mosque.  That’s just a nice English way to refer to it, of course.  This is an active mosque still, so you have to respect the Muslim customs and remove your shoes and be properly covered up.  It’s an immense building that looks quite similar to the Hagia Sophia, but of course, it’s blue, both inside and out.  It also looks bigger than the Hagia Sophia, but that’s a trick of perspective as the builders wanted it to look that way, especially upon approach of the city from the water.  The inside of the Blue Mosque is stunning and can make you gasp at the artistry that went into its interior decorations.  You can see for yourself in the pictures below.

Outside the Blue Mosque

The entrance into the mosque

The majestic interior of the massively hollow Blue Mosque

It’s quite decorative and immense

Keep in mind that ceiling is WAY high up

Tried to get the layer of tracks right above your head

The vivid red and blue carpet

Outside the Blue Mosque, looking at a minaret

At Ramadan I believe, the string of lights between the minarets blazes

The path towards the Hagia Sophia from the Blue Mosque

The Hagia Sophia, one of the things I was most looking forward to

The Blue Mosque has six minarets, just because

I would have liked to see those lights all on

After leaving the Blue Mosque, we left through a gate that faced the Hagia Sophia directly, yet we weren’t headed there just yet.  But it did provide a chance to get some great perspective shots of it.  Instead, we turned to the Hippodrome, a relic from the Romans that has been somewhat preserved.  It used to be something like the Circus Maximus in Rome and would host chariot races.  It was immense in size, but didn’t last very long after the Romans fell.  Yet the Turks insisted on not wiping out their history completely, so pieces still remain intact and in their original location. Foremost is an obelisk from Luxor, which the Romans brought from Egypt.  It’s pretty cool to see Rome’s expanse and lingering elements from when this was Constantinople.

Shots along the Hippodrome

The German Fountain, given to Turkey in 1900

The Hippodrome, a relic from its Roman and Byzantian past

Not much remains of the Hippodrome except things like this Obelisk

This Obelisk is originally from Luxor in Egypt, but brought here in 390 AD

Before the Hagia Sophia still (see how everything for me is all about whether it happens before or after the H.S.) we were treated to a Turkish Rug demonstration.  Of course this is a way for the cruise line to help out the local merchants…but this was a pretty cool experience.  We were led into a nice, comfortable, big room and we sat on the perimeter of it so that the main floor was wide open.  A huge stack of rolled-up rugs was in the corner. A very VERY charismatic man led us through the demo, but not before offering us Raki and some food.  A good salesman knows to make his potential customers comfortable…  Anyway, the rug demo was a massive show of all the various types of rugs that can be made and the various sizes and techniques inherent to the trade.   In the pictures below, you can see there were a lot on display, and the poor guys who had to schlep them around must get a great workout. The piece de resistance was saved for last though, as he brought out a rug we were allowed to touch – it was ridiculously soft and mesmerizing to look at.  It also cost $100K.  With that, the tour let us look around for a bit, but of course that was also the time that the salesmen pounce on you.  The demo guy actually came over to us and we didn’t actually intend to buy anything but these guys are good.  Plus, when we finally saw the one we ended up buying, and the deal we got…well, as I wrote about earlier here, it was an awesome memento.

Pics at a Turkish Rug Merchant

Ah, the rug store where we got a viewing of Turkish rugs and I spent 1500 dollars

The beginnings – there were about 35 of us all around watching

I couldn’t tell you what he told me now, but he showed us variations of wool, silk, and blends

Here he showed true workmanship by showing all the stitching underneath

I believe this pure silk rug is estimated to cost 100K

And it beautifully changed hues from different angles

After the show we were shown to another room where after some time, we picked this rug

Outside the rug store

Me, with 1500 dollars less than before

After dropping a good chunk of change on a Turkish souvenir, it was finally time.  Yep, it was finally time to visit the Hagia Sophia!  I’ve written above how excited I was to see this place so let’s just cut to the chase.  The Blue Mosque was amazing, but the Hagia Sophia was fucking incredible.  It’s huge.  HUGE.  Once you actually get close to it, it’s ridiculous.  Then when you go inside and into the main room, your jaw drops.  There are immense discs with Arabic inscriptions of holy names situated around the room and amazing wall decorations.  You look up and you get blown away by how this could even be built.  Even more impressive is that it was done before precision, modern engineering came about.  Apparently there is an error in the rooftop circular opening, but you know what, I’ll cut the builders some slack.  We were given some time to explore, and explore we did.  There’s an upper level you can reach via a winding tunnel (no stairs) up and it provides you a fantastic perspective of the interior.  Even typing this up just gives me a nice sense of euphoria remembering how it felt to be there.  Such an incredible experience.

Finally on our way to the Hagia Sophia!

The Hagia Sophia, once a church, then a mosque, now a museum

From the outside, you can see the Hagia Sophia is immense

And has lots of architectural elements to it

The immense entrance leading into the main room

A blurry but indicative shot of what’s to come

The Imperial Gate is huge

Inside, looking straight up at the top of the dome

The lighting fixtures remind me of Grand Central Terminal in NYC

A mosaic of the Holy Trinity dating from the 9th century

This building is immense and much bigger than the Blue Mosque

Me and the Hagia Sophia

A kind traveler took our picture there

Our group’s meeting point outside

After that, it really was time to go.  We got dropped off back at the Equinox and under a crystal blue sky and perfect temperatures, we steamed away while having a stunning vista of the city of Istanbul.  It was a wonderful visit – all too brief, even at two days – and one I’ll never forget.  I also have the hundreds of pictures I took there…. 🙂

Some last shots of Istanbul before boarding the ship

Hagia Sophia on the left, Blue Mosque behind on the right

Looking south on the Bosphorous towards the Sea of Marmara

The Asian side of Istanbul

Our grassy deck and Istanbul in the background

Me and my hat

The Hagia Sophia in the center, Blue Mosque on the left