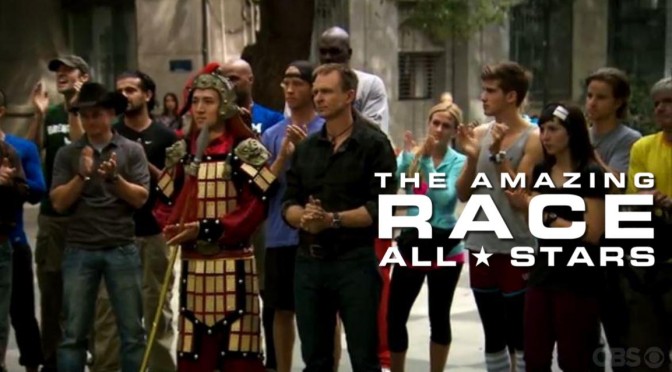 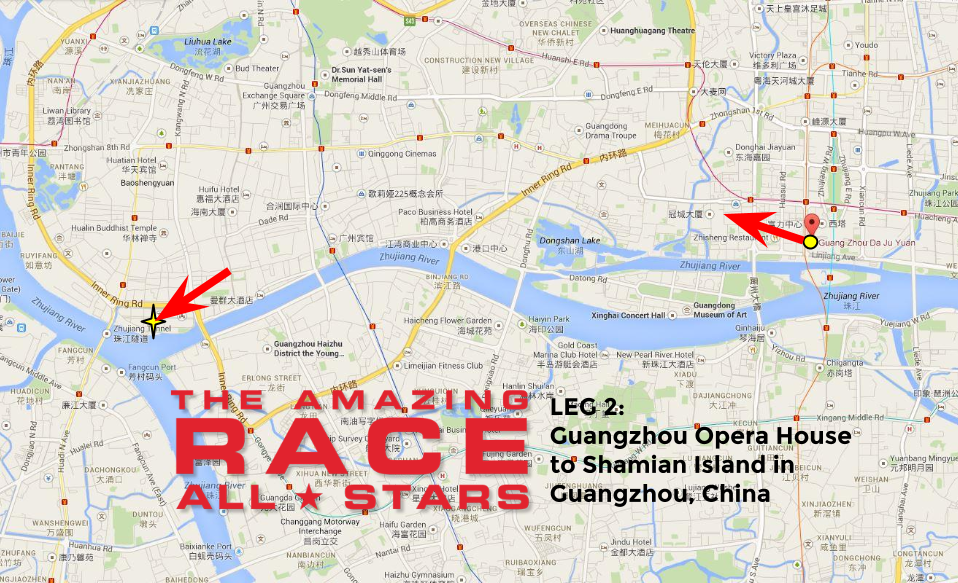 Well, was any of what transpired all that big of a surprise? Â I’m of course referring to the pairing of Mark & Mallory. Â If you read my Bonus Clips recap or watched them yourself, you’d know that these two are wildly different people with wildly divergent points of view on how to run a race. Â  Mallory was in it to actually win it, even if that meant making a sacrifice for the rest of the race; it was just important to still be racing. Â Mark did not see things that way and let his “regular life” mindset get in the way of things. Â These two viewpoints were never going to reconcile to form a cohesive whole. Â I’m bummed about that as there was potential to grow but as evidenced in this very early episode, that just didn’t happen.

So what happened this episode, Hobie, you ask? Â Glad you asked! Â Let’s do a recappy-type of thing:

The Cowboys (Jet & Cord) headed out first and immediately shot themselves in the foot by deciding to hoof it towards the next stop at Chen Clan Academy. Â If only they had researched things a bit, as if they had, they’d have seen taking the subway was by far the quickest and most direct way to get there. Â Instead, they went from 1st Place to 9th Place before even getting to the first place marker. Â Ooof.

While the Cowboys are running across town, everyone jumps in front of them except for the Country Girls (Caroline & Jennifer). Â This development heavily favored the Country Girls in a few moments, that’s for sure.

At this point, Mark was doing great as he & Mallory had gotten to the Roadblock 5th but his industriousness got them out first. Â After that it was all downhill, as Mark left his bag on the ground. Â Did he assume or expect Mallory to pick the bag up? Â It’s not clear from the show but maybe the Bonus Clips will help out, and I’ll report back accordingly as that would seem to be important. Â  So they leap in their cab towards the next route marker and get some distance before Mark realizes he doesn’t have his bag. Â That’s when he freaks out – Mallory tries to assuage him and make him see that his bag isn’t important, as she’s got his passport. Â But that’s irrelevant to Mark as he just can’t not have his clothes and it’s not easy for him to just dismiss things he’s bought. Â  Oh boy. Â Mallory tries to get through to him that they’ll be fine without the bag and they just need to keep racing. Â  She even says that she’ll happily buy him all new stuff if he’ll just get back to wanting to race. Not satisfactory for Mark though and he insists they go back to get the bag. Â At that point, they do head back for the bag and absolutely everyone else overtakes them.

Another crazy event: Â At the Roadblock, Cord and Jennifer are chatting while waiting for their partners to finish assembling the car. Â In an astoundingly ballsy move, Jennifer, who is clearly going to be in last place with Caroline as she has no clue how to assemble the truck, pleads with Cord to give them the 2nd Express Pass. Â Jet & Cord had earlier expressed great reserve at the fact that they didn’t want to have to deal with the drama the 2nd Pass was likely going to bring them. Â I think Cord realized that this was a quick way to resolve the drama and get it over with – Cord is fine with the deal but defers to Jet’s judgment. Â Jet handily puts the truck together and Cord puts forth the Country Girls’ proposal. Â Jet accepts it too! Â I am amazed and impressed with Jennifer’s ingenuity and luck. Â We’ll see if that deal comes back to haunt the Cowboys, but I can’t hate. Â It was a well-timed deal and it was awesome.

Detour Time (1st of the Season): Featherball or China Cup

Featherball: Â Play a Hackeysack-type of game and keep the ball in the air for 10 hits
China Cup: Â Get a Chinese healing treatment with glass jars all over your body

Spoiler Alert: Absolutely no one went for the China Cup Detour – not sure why, but I suppose everyone assumed that the athletic option would be quicker. Â Honestly, I don’t think that ended up being a great assumption and bet some people would have benefitted from choosing the passive option.

So as we saw above, Mark insisted on going back to get his bag which frustrated Mallory to no end. Â He was clearly offended at what he perceived as her indifference to his loss. Â The rest of the leg went about as well as could be expected as while they did find his bag (that surprised me), by the time they got back to the Detour, they were clearly racing for last place where as before, they were in the lead coming out of the Roadblock.

In the end, Mark & Mallory couldn’t get it together to beat either Jessica & John or Joey & Meghan at Featherball and finished last. Â In a surprising change to what I’ve ever seen at the Pit Stop, Phil had invited everyone to be there when Mark & Mallory arrived. Â It had to have been clear at that point what was about to occur, but that didn’t stop Mallory from bursting into tears when Phil told them they were last and also eliminated. Â It was also extremely clear that this wasn’t a learning experience for either Mark or Mallory; I wonder if with time they’ll forgive the other but in that moment, there was a lot of pain in both of their faces. Â All the other racers were also sad to witness this go down too – it was kinda brutal. Â I am looking forward to the Bonus Clips for hopefully more resolution about what was going on internally. 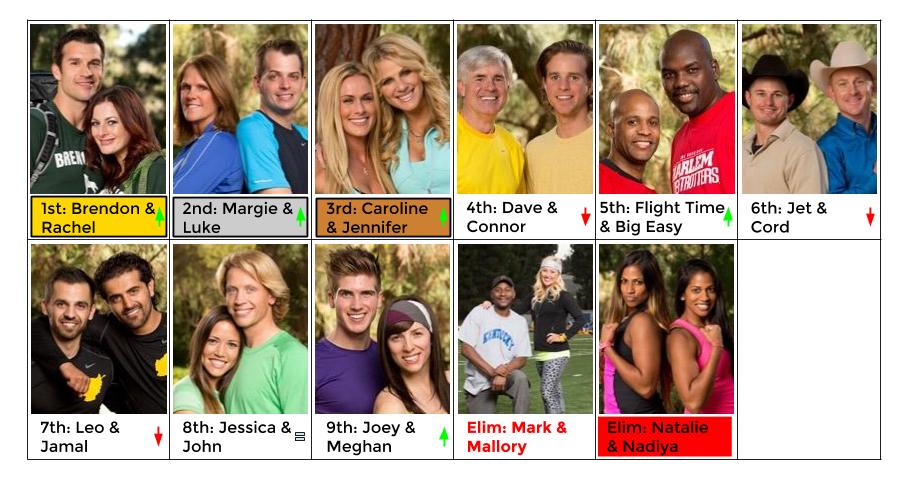