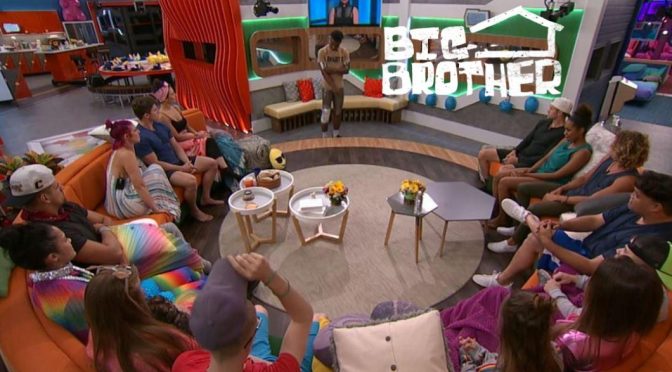 I have no regrets about not recapping last season (BB19) as Josh won that mess and let’s not speak of it again.  Celebrity Big Brother was another that happened in the meantime and it was too short to devote too much attention to…but I loved it so much more than BB19.  Who knew?

We’re back though, there’s no BB Veterans gumming up the works, and I am happy thus far.   There is some serious hotness happening in the form of HWG (Hot White Guys) and I am heeeeeere for it.  I’ve screencapped the following for you:

Dear God these guys are hot.   You can tell the difference between them as Winston has the hairy chest.  Anyway, I’m sure there will be posts to come that highlight Winston’s attributes, so don’t worry.   Just…enjoy.

Oh yeah, so what is happening?  We got a brand new cast of 16 who entered into the house in groups of 4.  That is important.  But first, the house has some interesting new features, such as giant circular couch that apparently can rotate as well as a bedroom wall that retracts.  But it’s still the same floor plan we’ve ever known, so nothing crazy to report. 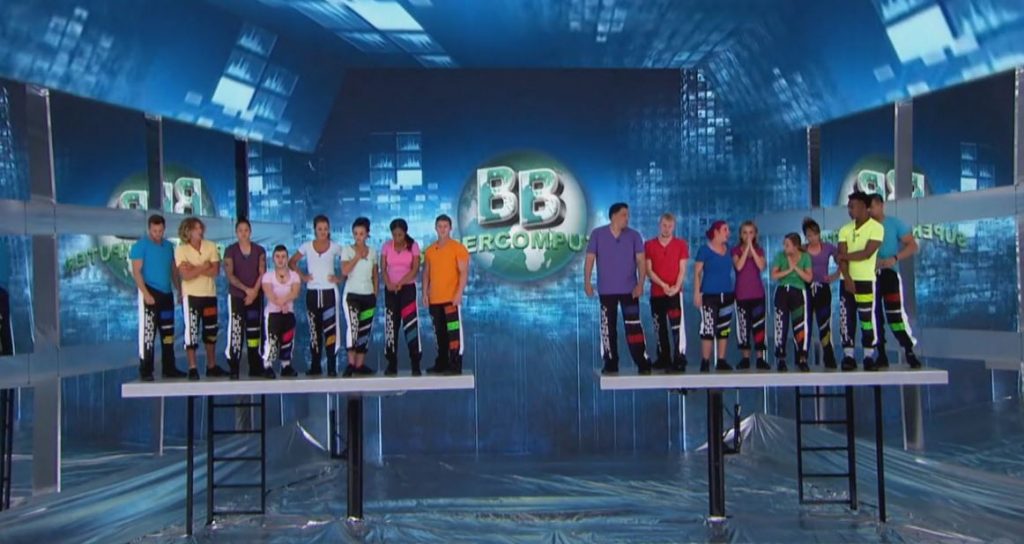 After the typical intros, we learn the theme of the season will be Big Brother Tech, so the first set of competitions is heavily reliant on cyber themed stuff. 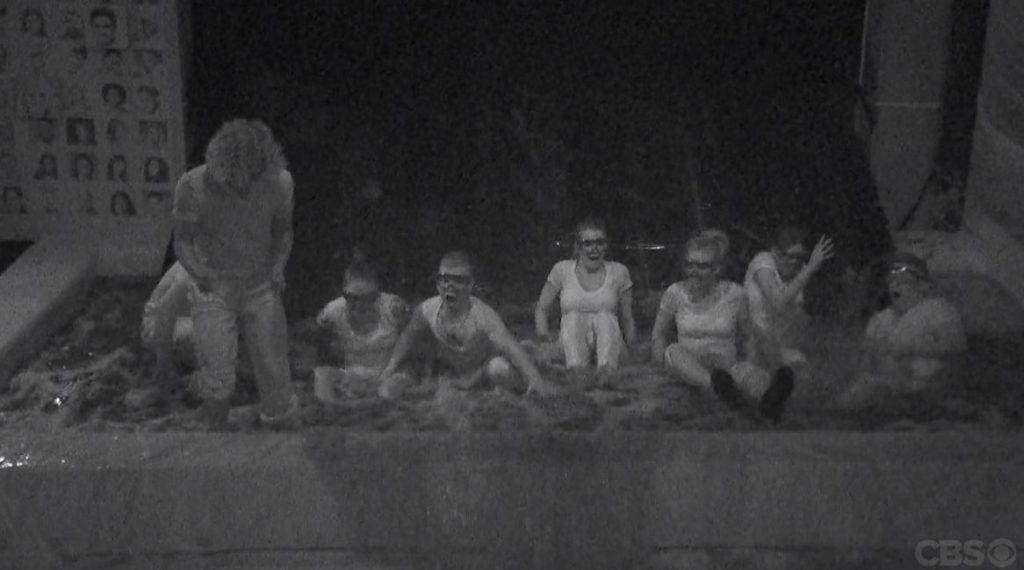 One group of 8 will get stuck in goop (the Trash file) looking for “file folders” – one of which enables someone to Play for the opportunity to “Reprogram” Big Brother, and a penalty bestowed upon the person who can’t find a folder. 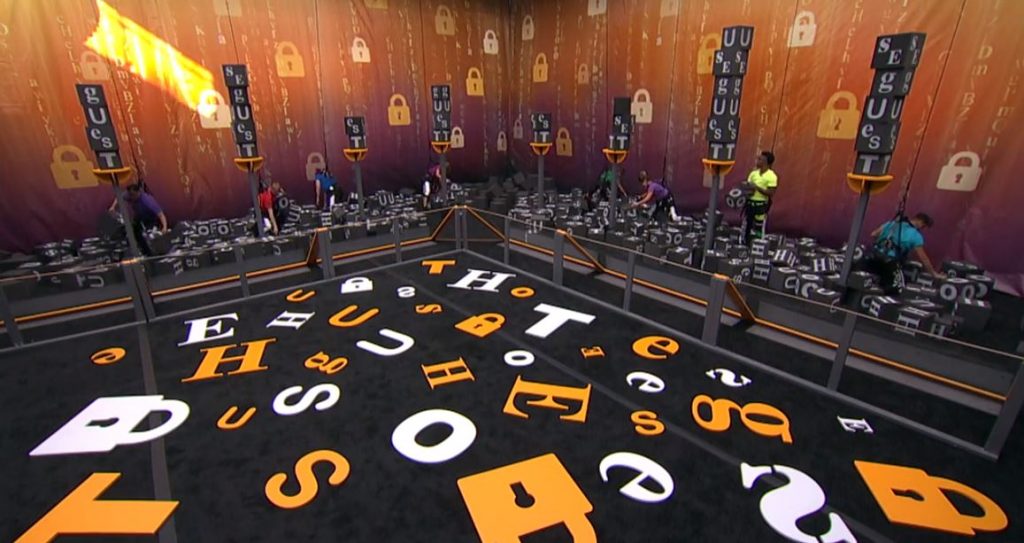 The other 8 are stuck in a CAPTCHA from hell and have to stack blocks to spell Houseguest.  Whoever finishes first also gets to Play for the Reprogram opportunity, and again, the person who finishes last here gets a punishment.

Mind you, these comps are NOT Head of Household competitions – it’s all about this Reprogram thing.   After all is said and done, the winner is Swaggy C, who won the CAPTCHA comp too; he ended up competing against Angela. 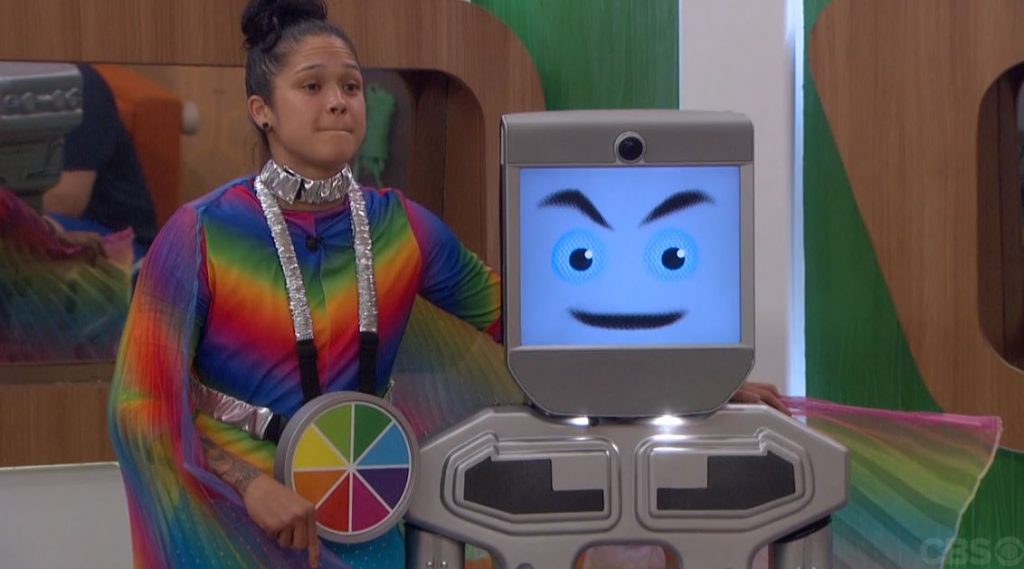 The losers of the two competitions were Kaycee and Sam.   Now, I’m just gonna speak my truth here:  Sam’s punishment in comparison to Kaycee’s is UTTER BULLSHIT.  Big Brother knows how to tug at my anger strings and they really did a number on me when I saw that Sam’s punishment was to “become a robot” – meaning she is trapped somewhere in some booth driving this fucking robot around, only able to talk through a speaker and see through the video camera.  Effectively ostracized on Day 1, as it’s like, how can you talk quietly or whisper or just have a human connection?   YOU CAN’T.  Not on Day 1, that’s for damn sure.   Everyone is looking for ANY reason to vote someone else out, and this is it.   Kaycee’s punishment of a “Pinwheel of Doom” is annoying, but hardly a gamekiller.

The power that Swaggy ended up winning allowed him to save 8 people from the possibility of being evicted this week…and initially he thought it would be his choice of any 8 (including himself).   But not so, as this is Big Brother.  He’d have to choose 2 of the 4 “entry groups” – so yeah, that makes things interesting. 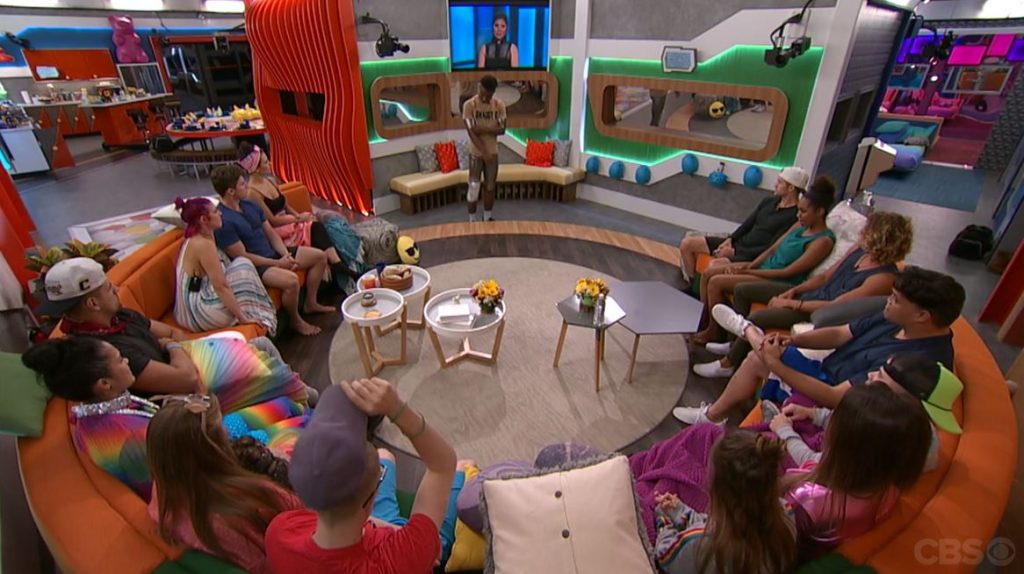 It’s interesting because he had been having discussions with various people:  Angela, as she was his competition in the final round of competition (although she had already proposed that it would only make sense for them to each save the 8 they were competing with, which pissed him off);  Bayleigh, as she’d been friendly and encouraging to him, leading him to think of her as a sister.  Others also thought they had a good shot of staying, but with this “Pick 2 groups” mandate, it was time to make a move!

HA! No, no moves were made.   He conservatively chose to do what Angela had suggested (just pick the 8 members that you came in with), but of course that disappointed her as Swaggy had told her he’d save her.   Oh drama, never stop.

There’s a whole lot of other stuff that is starting to happen, with some people being kind of annoying (Kaitlyn and her Yoga nonsense as a prime example; Steve being a low-rent Derrick) and some people being pretty cool – I’m just impressed that I kind of know names of most of these people already.

A lot to get through, amirite?  Now it’s time to talk about HoH.  With Swaggy’s decision made, that meant those 8 in the 2 groups were safe from elimination but also not eligible to compete for HoH.   So only 8 were competing. 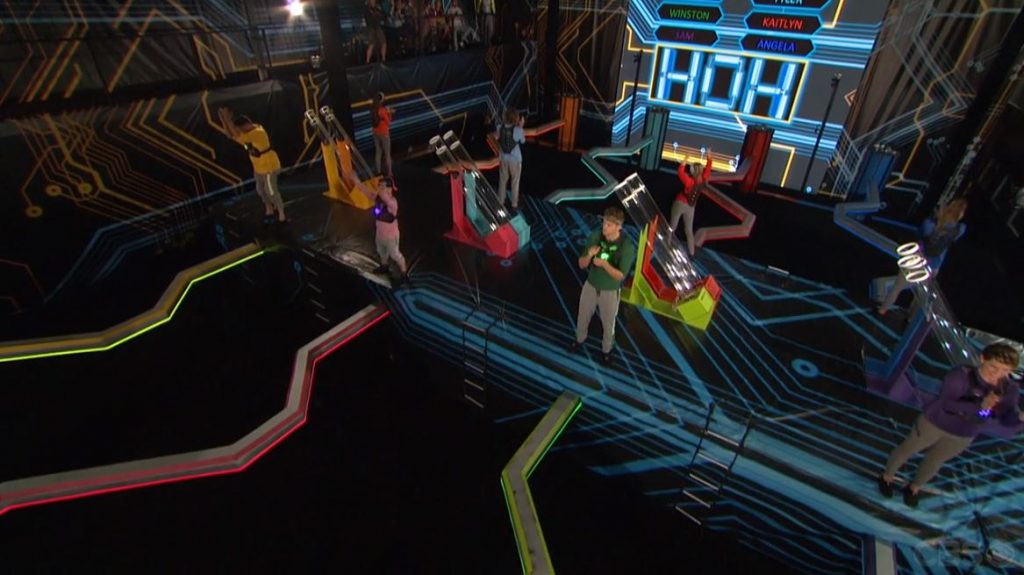 Are these sets super cheesy but awesome nonetheless?  Yes, yes they are.  In this comp, each houseguest had to scramble across a twisty balance beam and grab a “Delete Dot”, bring it back across the beam, then drop that ball in another houseguest’s tube.  heh heh.  If you got 10 Delete Dots, you’re out.   GUESS WHAT HAPPENED!  Everyone targeted Sam the Robot as she’s been at a huge disadvantage this entire time.  WHAT A FUCKING SURPRISE.   UGH.  I am really annoyed by this – I’d understand this competition a few weeks into the game when you’ve really had a chance to get to know these other psychos and now it’s ON, but at this point, any reason is a good reason and Sam is an obvious weak link and let’s target her.  It’s complete bullshit.  So yeah, Sam the Robot is out first, followed by cut-rate Derrick (Steve).  Him, I’m not caring so much.  He’s not been crippled by anything except being so out of place. 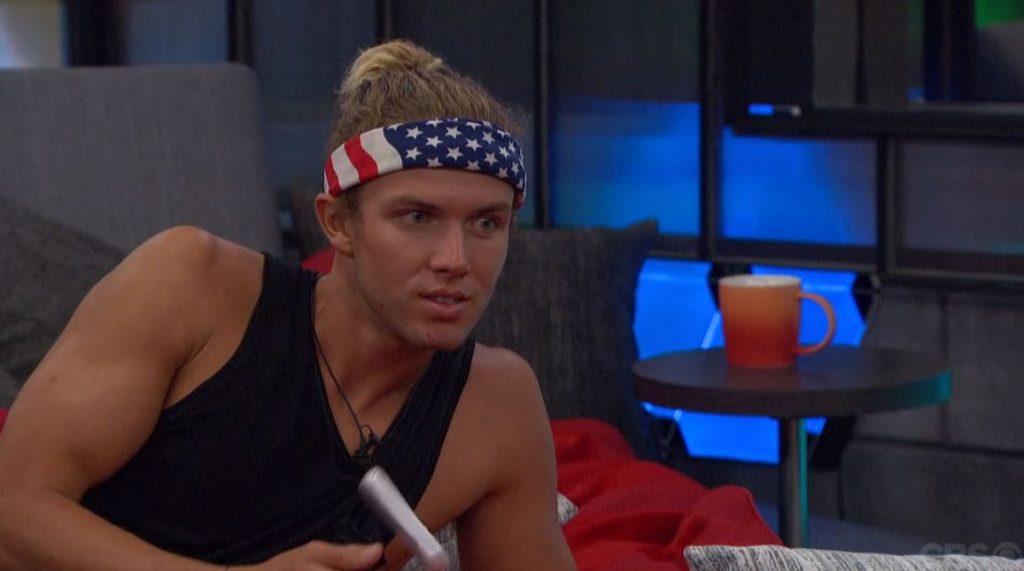 Surprisingly, Tyler, who I had written off after his Lifeguard Intro, pulls out a win.   And he’s not nearly the moron I assumed and picks up immediately on all the maneuvering people are trying to use on him as they campaign for nominations. 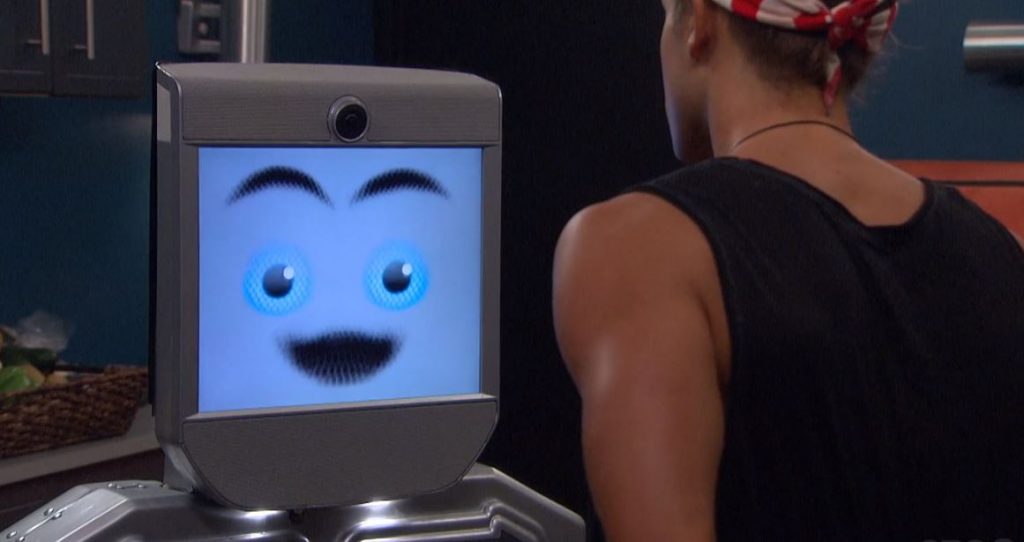 Sam’s plea is the saddest.   He reassures her that she isn’t his target, and he may very well mean it.   But I still think the game is still pretty early and no one’s made that bad of a move yet to displace Sam as the easy first vote.   It’s too bad, as I did like her personality.  But when you’ve been turned into a fucking robot, your game is gonna suffer. 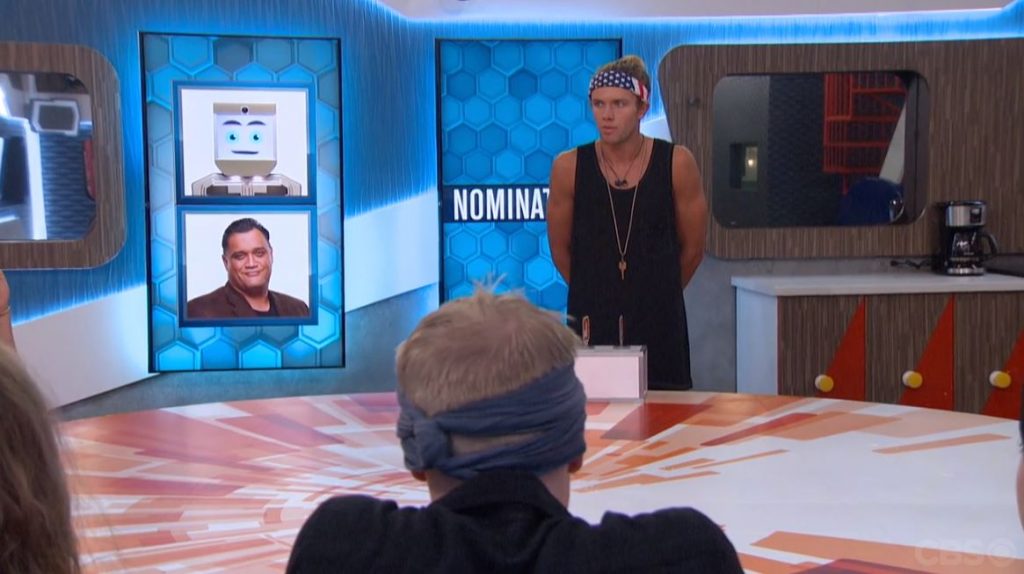 So yeah, Sam the Robot is nominated along with PersonalityFree Derrick (Steve).   Tyler gives pretty good reasons for the nominations and there’s a possibility things could shake up, but yeah, no, doubtful.  I do see the beginnings of a lot of potential drama in the future though: 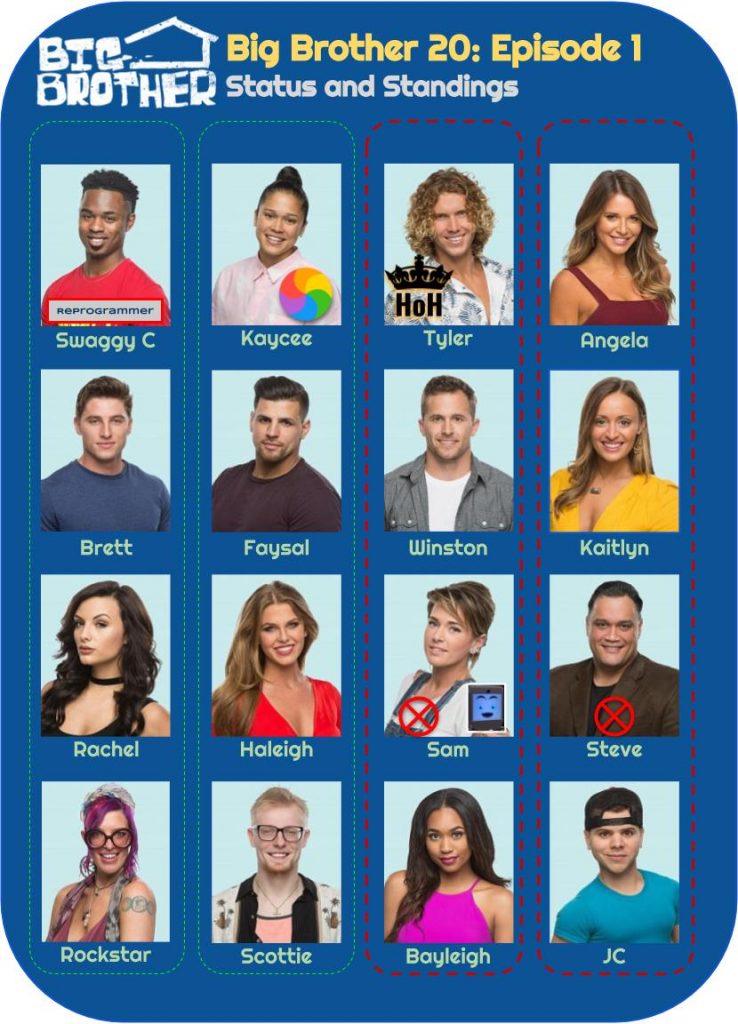 Here’s hoping this season continues on what seems like a promising trajectory.   Watching and recapping this is a welcome respite from the other shit happening right now, that’s for sure!