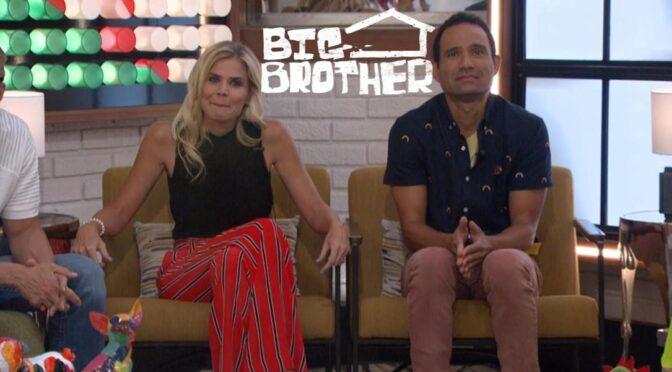 Oh, wasn’t it clear that this is just a Janelle fan page?  Honestly, all headlines are probably going to just be in relation to her status.  When she gets evicted, consideration will be made if we even continue writing.  Yes, I just wrote “we” rather than “I” as one person alone isn’t enough to write about Janelle and if I need to manifest other personalities, so be it.

Anyway, not that I get out of the house much, but it really is hard to motivate myself to write a Wednesday AND Thursday post.   So here we are, on Sunday, and I should probably quickly catch up.   Honestly, not too much really happened?

In the Wednesday Veto Episode, a lot of potential alliances were being made, but I have way too much BB experience to put too much faith in any of them, even the likely ones such as Cody and Nicole F and/or Dani.  Things always change.   Anyway, in the Veto Comp, Cody was hot: 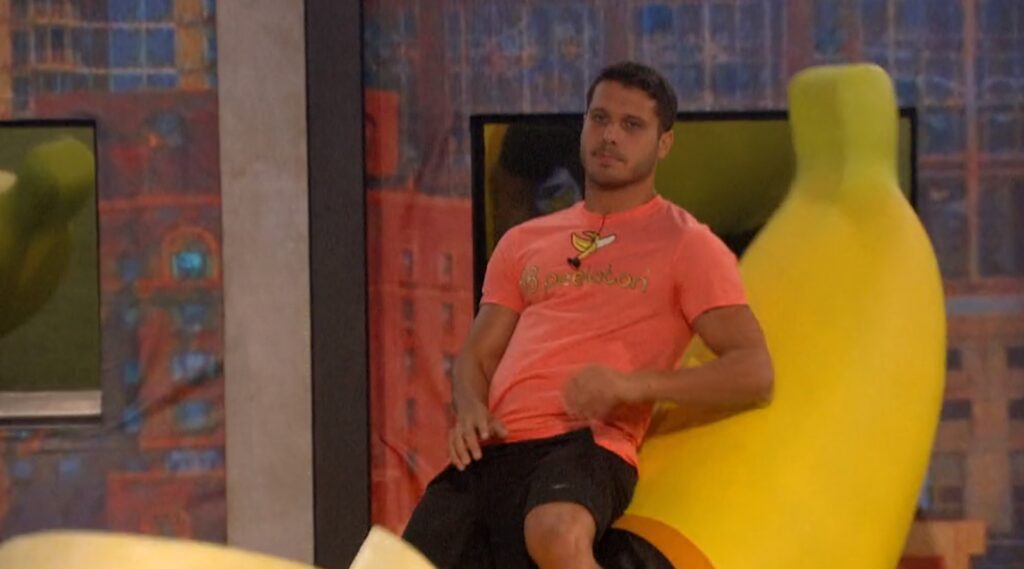 Not a surprise.  The competitors had to rock a banana to charge a timer (and something else, if you know what I mean….) and then go and try to stack vegetable-shaped puzzle pieces and have the largest stack.   Also, pay attention to your timer as you have to re-rock the banana to get more time.   See Enzo: 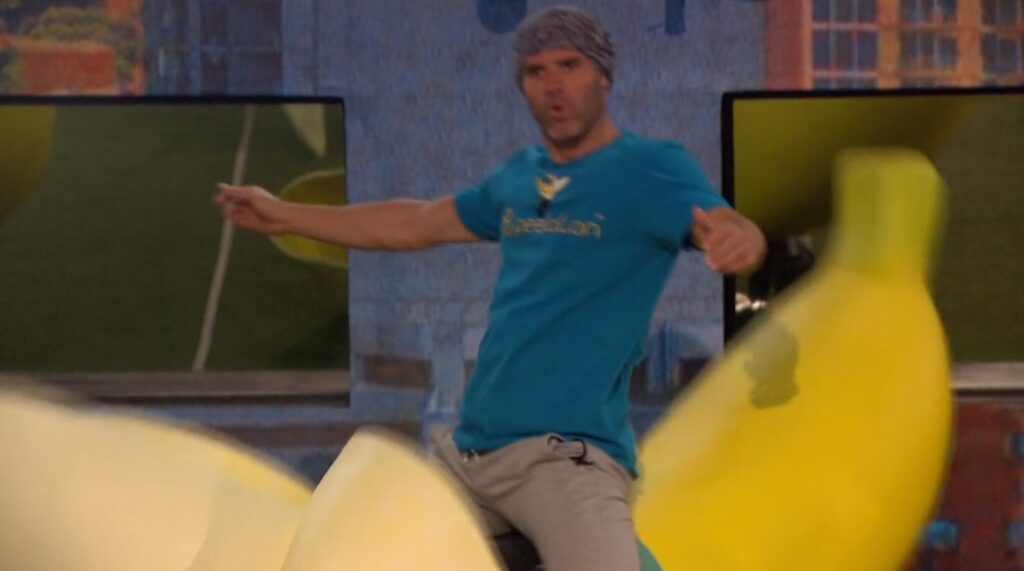 It’s a lot to take.   So many people time out during this competition, including Cody and Ian.  Enzo locks in a good score of 18 and Kevin HAS HIM BEAT at one point, but then he decides to continue playing as Keesha is still in the comp and then his stack falls and it’s like, dude WTF.   You had the win, take it.  Anyway, Enzo wins Veto.

And does Enzo use Veto? nope.  So yeah, not a lot going on as Enzo judged it was too early to make any moves to force Cody to put more blood on his hands and sure, whatever. 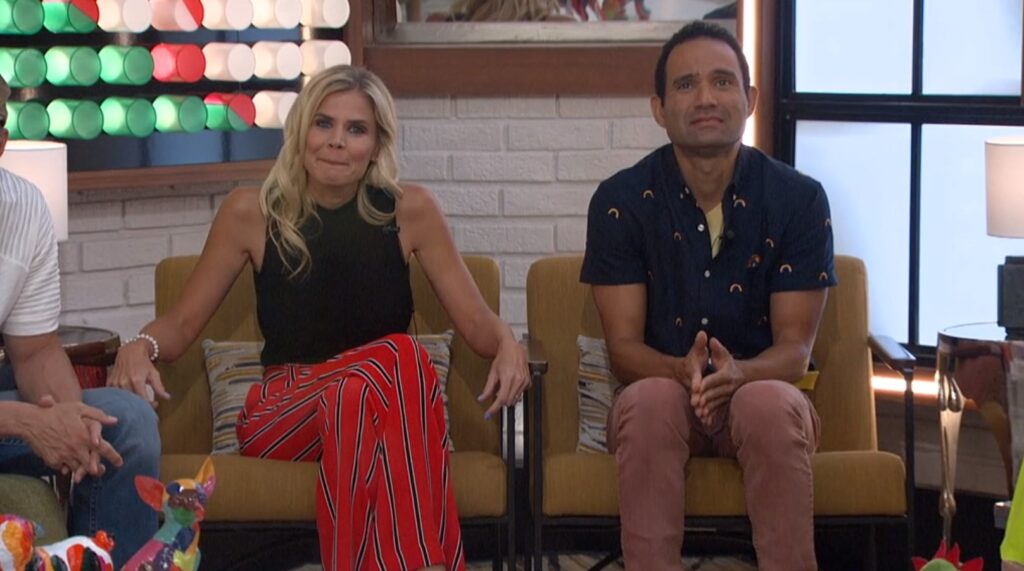 We get to Thursday’s Eviction episode and basically learn that Keesha….isn’t campaigning to stay in the game.   Like, WTF.   She basically pleads for Janelle to help do the campaigning for her as she knows Janelle is on her side, and for Janelle it’s like, honey, I can’t do all this lifting for you.  It’s clear Keesha isn’t super on fire here to stay, even though she does form some connections.  But you have to do more than that, and Kevin at least is doing that work.  So is it shocking that Keesha gets evicted unanimously? 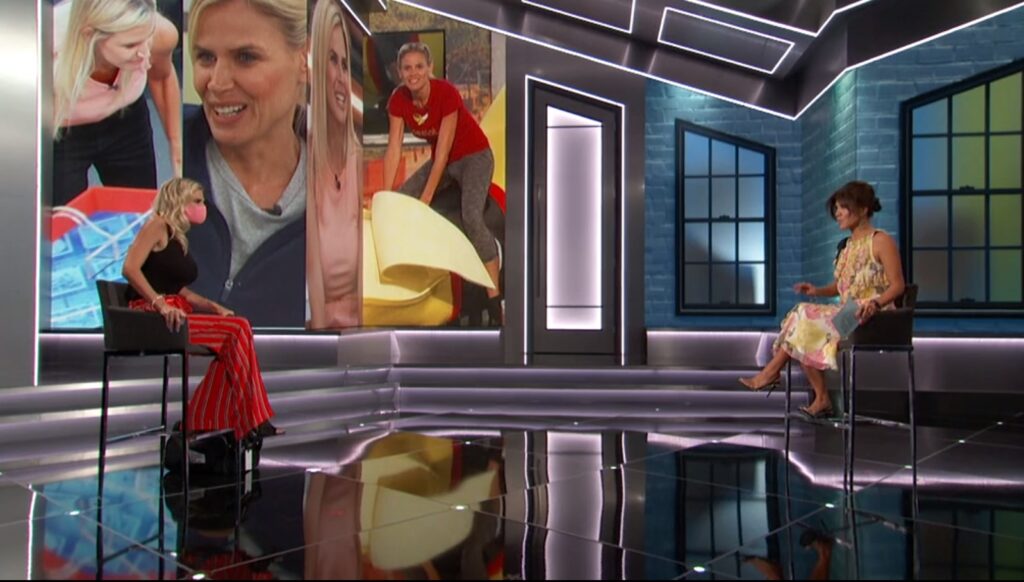 It is not.  We do get a very socially-distanced conversation between Keesha and Julie, and some goodbye messages, and Julie tells her goodbye and good luck, and it’s not entirely clear or obvious if a Battle Back situation is brewing.   Who knows?   It would probably be nice to not have to go back to the ‘real world’ and COVID as man, still seeing the large group of them all living around each other without fear is so nice.

The next HoH competition is thus upon us and it’s a booth competition based around answering videos the houseguests see right then and the videos are just insane Zoom calls performed by the guy we do see quite a lot throughout the seasons and this time he’s playing all the members of an Italian family.   It’s insane. 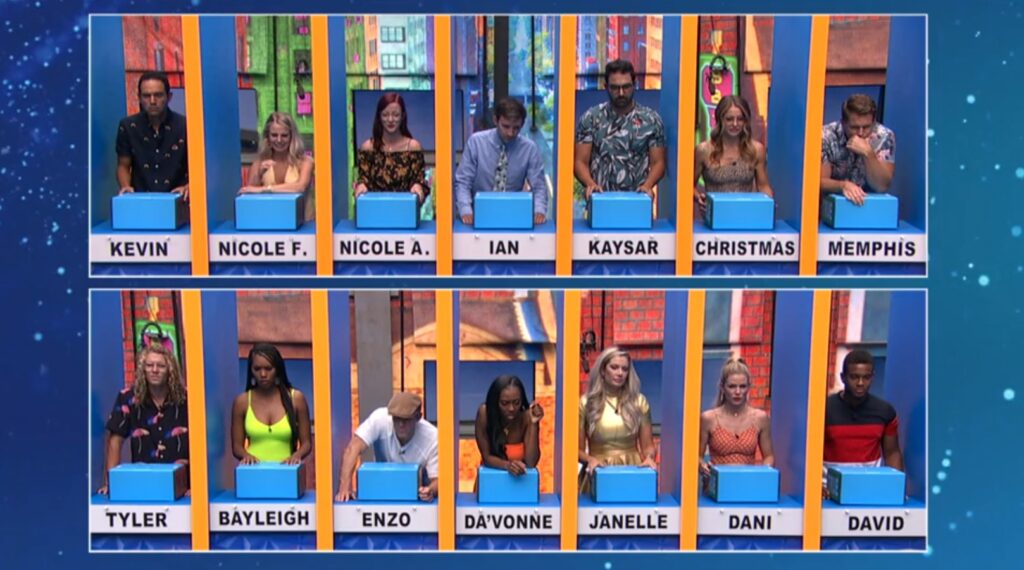 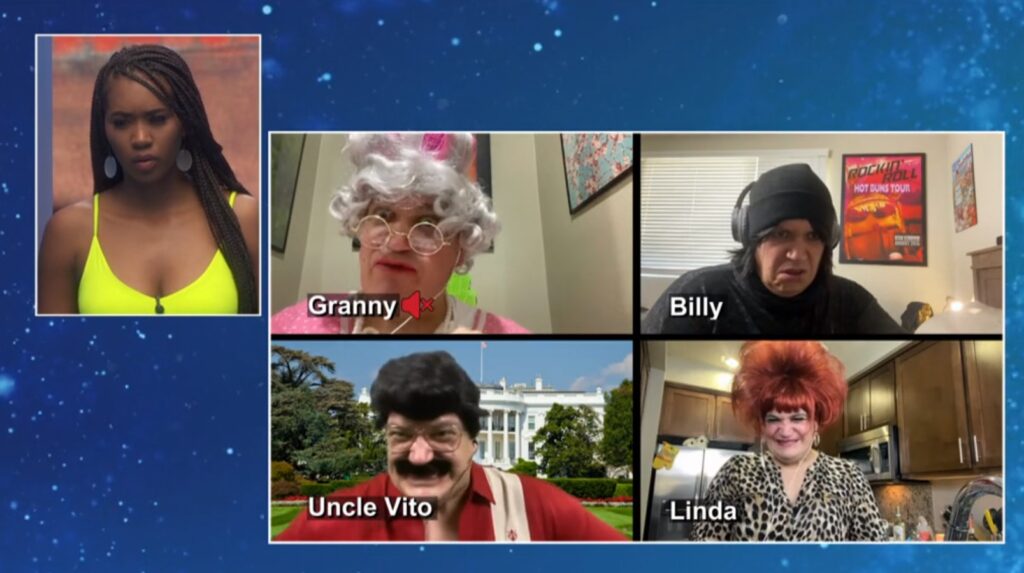 Kaysar is out in the first round (geez) but Janelle last for a while.   There are 2 sets of questions as there are 2 videos and oh boy it’s a lot.   At the end, there are 5 left to compete and our new HoH is…. 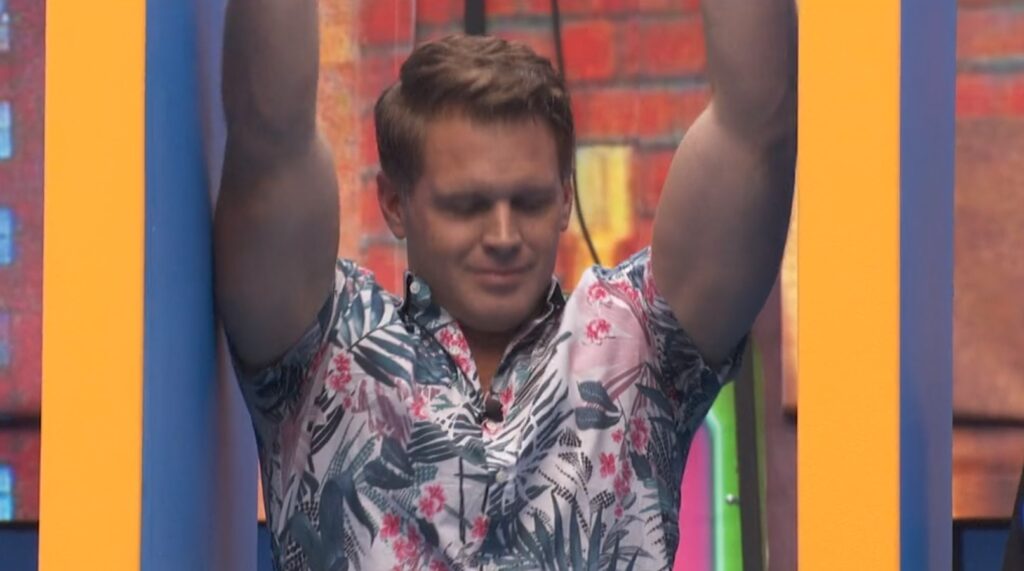 From the bit of Feeds info I’ve been letting myself see on Reddit as well as Twitter spoilers, it does seem Memphis is not exactly doing his HoH in an expected manner?   I’m excited to see how it’s portrayed in tonight’s episode, as apparently there’s plenty of tears to go around and I’m always here for that. 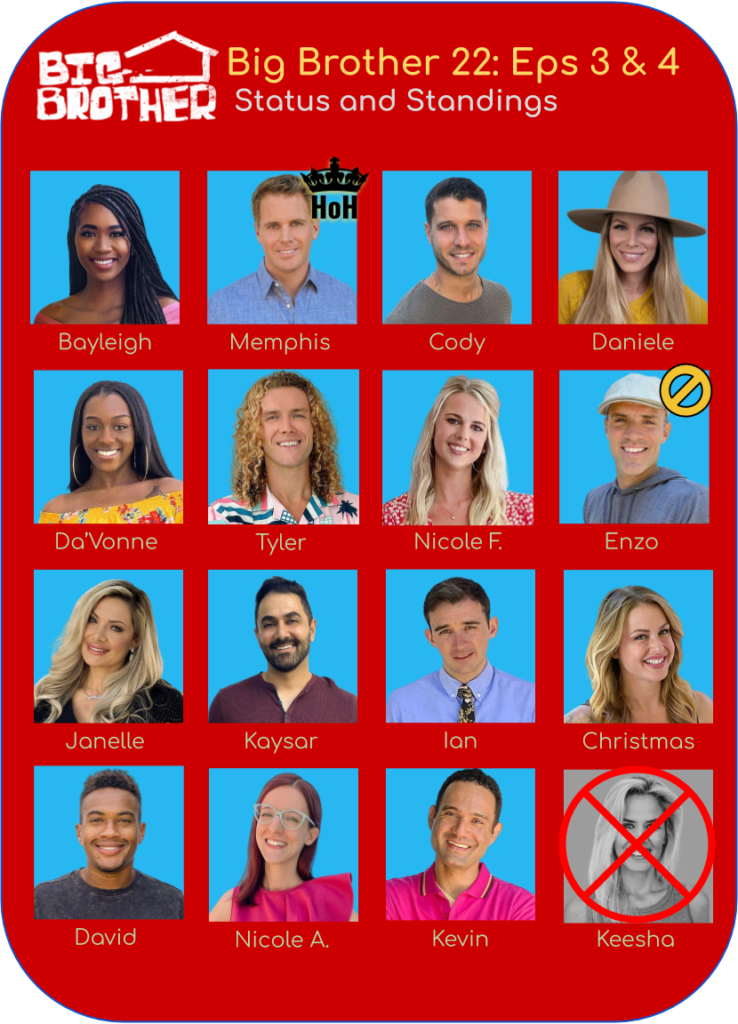 It was not a bad first week as Janelle and Kaysar stayed in the game, but next week is definitely going to be a challenge!  Honestly, everyone is way obsessed with Janelle and Kaysar as targets (boo!) and I guess it’s not hard to do that but there really are some better targets out there.   Looking forward to seeing how things evolve!