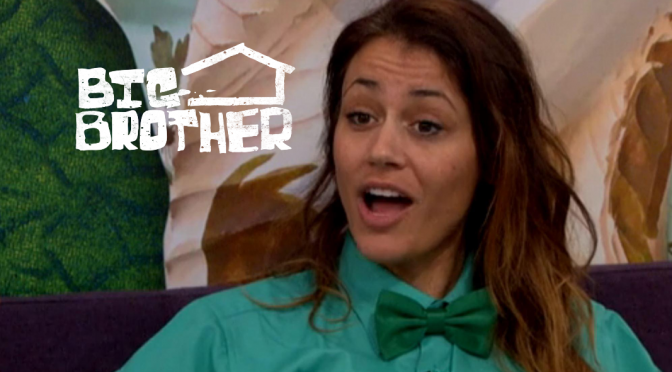 Tiffany goes on the offense in an effort to stay in the house this week, but the odds are certainly stacked against her.   Will she be able to sway hearts and minds, or is Tiffany too much of a loose cannon and too much of her sister?  Well, the quick answer is “no”, and it’s not quite clear why just yet, especially with what we were shown in these two episodes.  It looked to me like Tiffany did a damn fine job clueing everyone in on what DaVonne has been doing.

Quite a lot in the Veto episode on Wednesday was shown to get people thinking: 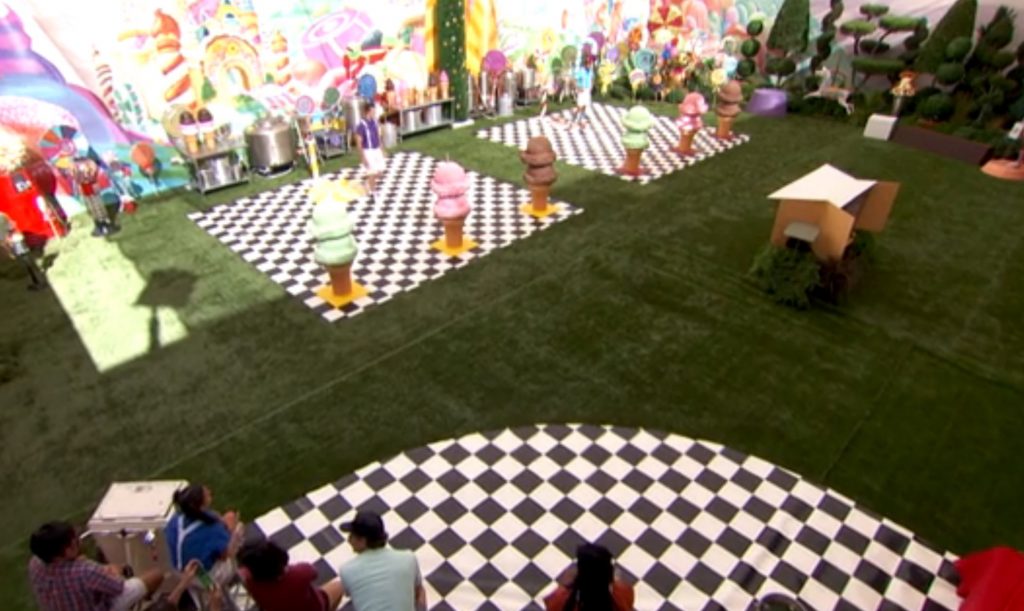 The game this week is a head-to-head matchup where each houseguest has to put the scoops of ice cream in the right order, but have to follow proper Towers of Hanoi rules (minus the part about size of the scoops – we’d probably still be watching them compete if that was a factor). 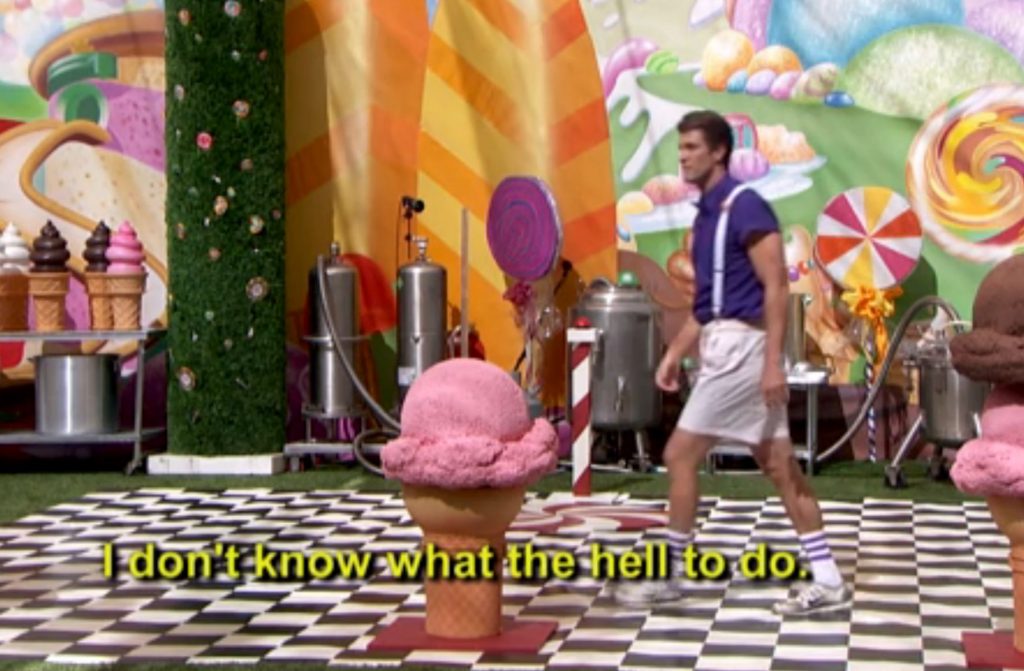 It starts off unsurprisingly with Corey absolutely confused by the mechanics of the puzzle.  He got to pick his challenger, Tiffany, and maybe that is a bad move as Tiffany is probably smarter at puzzles….but after a few awkward minutes of Corey copying Tiffany’s moves, he realizes he better work on this himself.  And sure enough, he figures it out before she does!  Rightfully, she’s embarrassed.

This process continues until it’s finally a head-to-head of the last two, Paulie & Corey.  They have to make out until one breaks away from the kiss first….okay, fine, that’s NOT what happened.  But Paul also got beaten by Corey in this contest and the world has officially flipped.  Paulie decides to throw the win to Corey, which does not go unnoticed by DaVonne, who also lost. 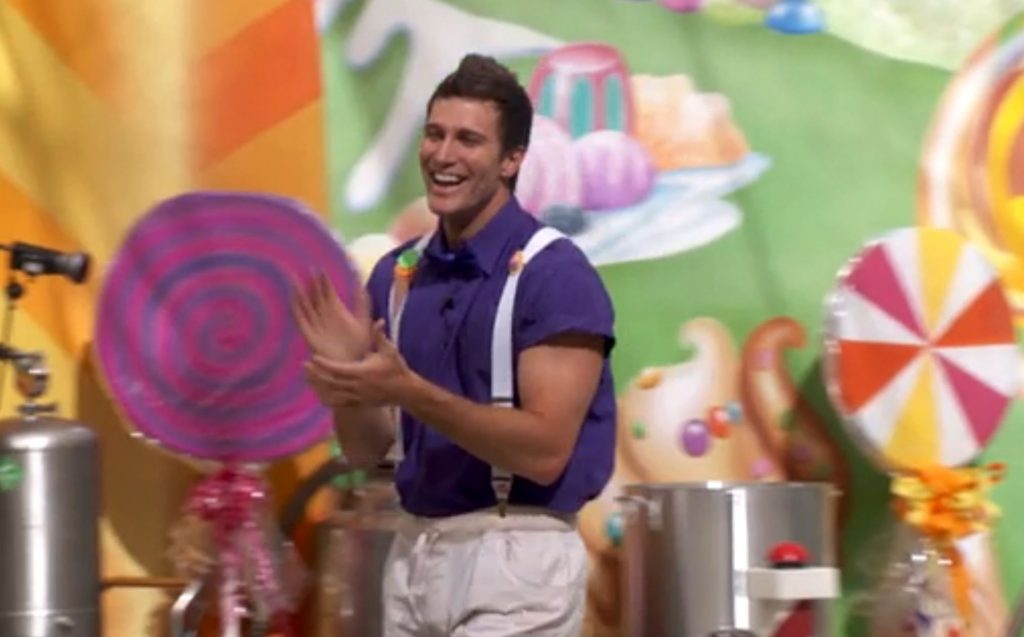 Rejoicing around the world as Nicole awkwardly chest-bumps Michelle.  Seriously, Nicole is strange this year.  Anyway, DaVonne realizes she’s possibly the next target and starts to CRY while waiting to go back in the house.  Of course, Tiffany sees this and it all begins to click for her.  Why is DaVonne upset if she knows Tiffany has her back?  Oh, that’s because DaVonne does NOT have Tiffany’s back and is worried about a preemptive strike. 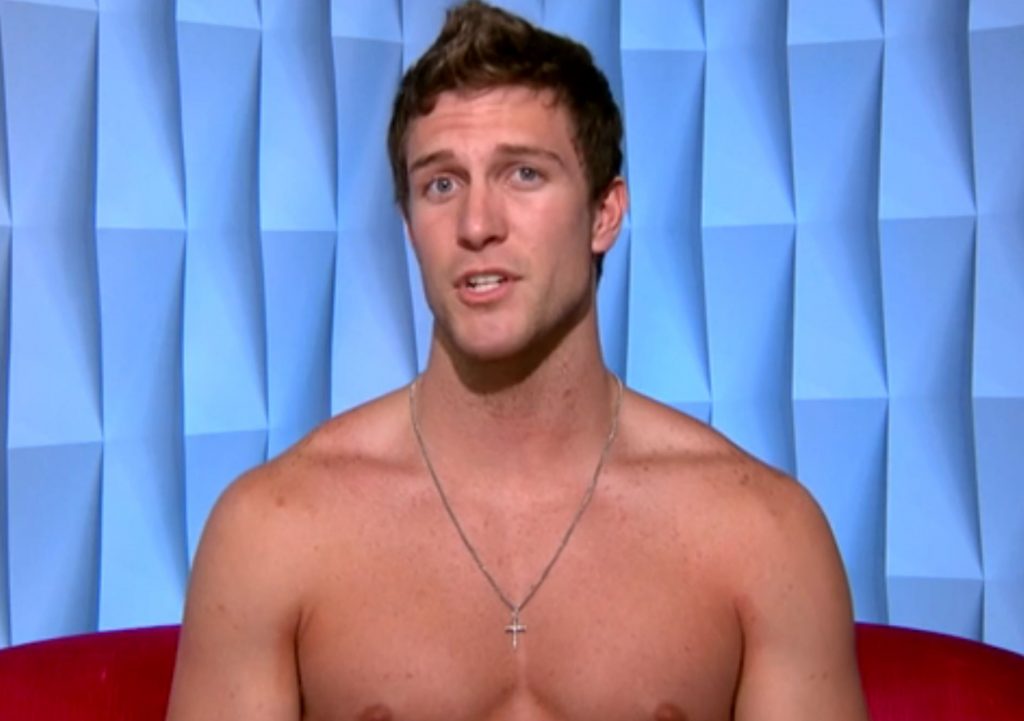 Shirtless Corey pic is here because a picture of this giant man shirtless is pretty awesome. 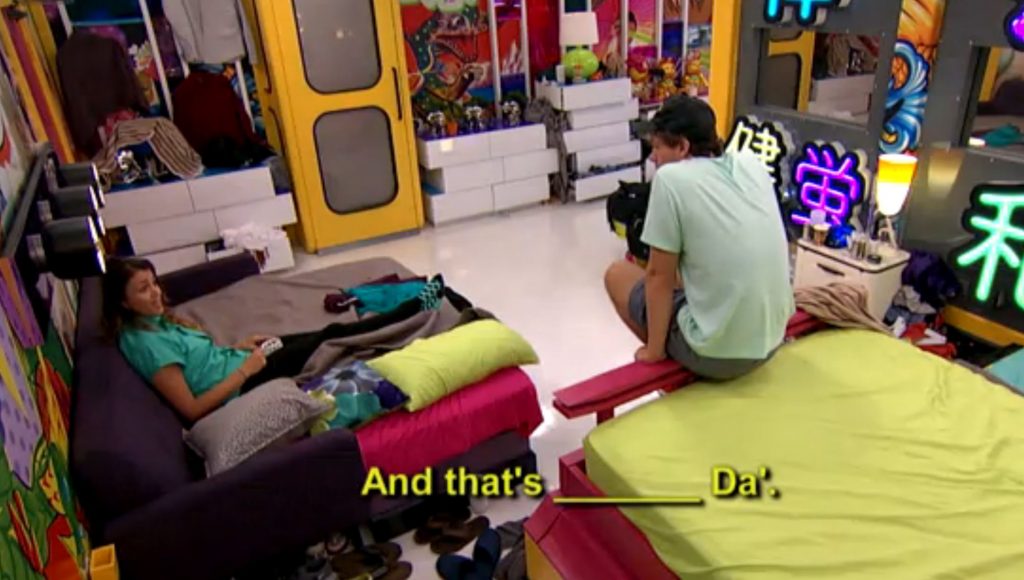 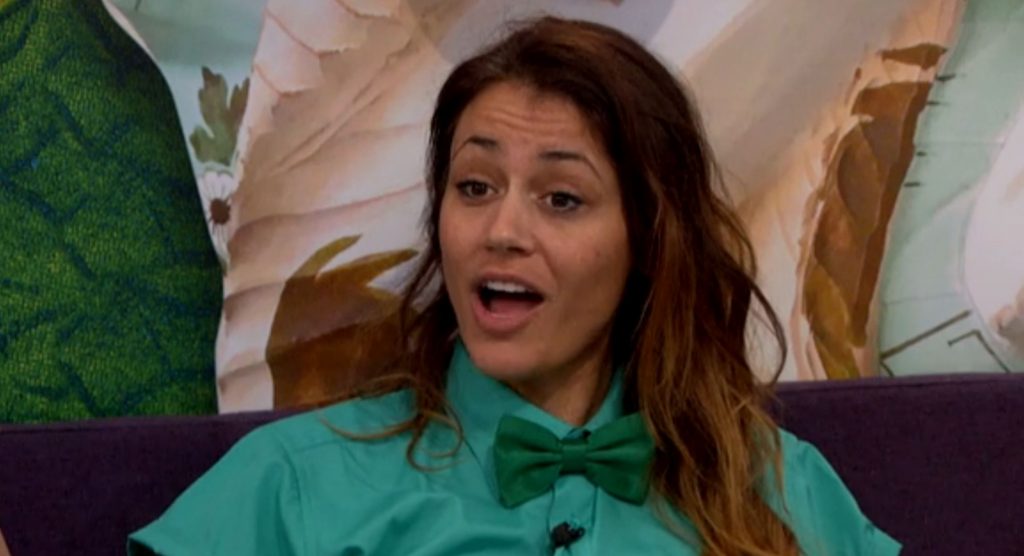 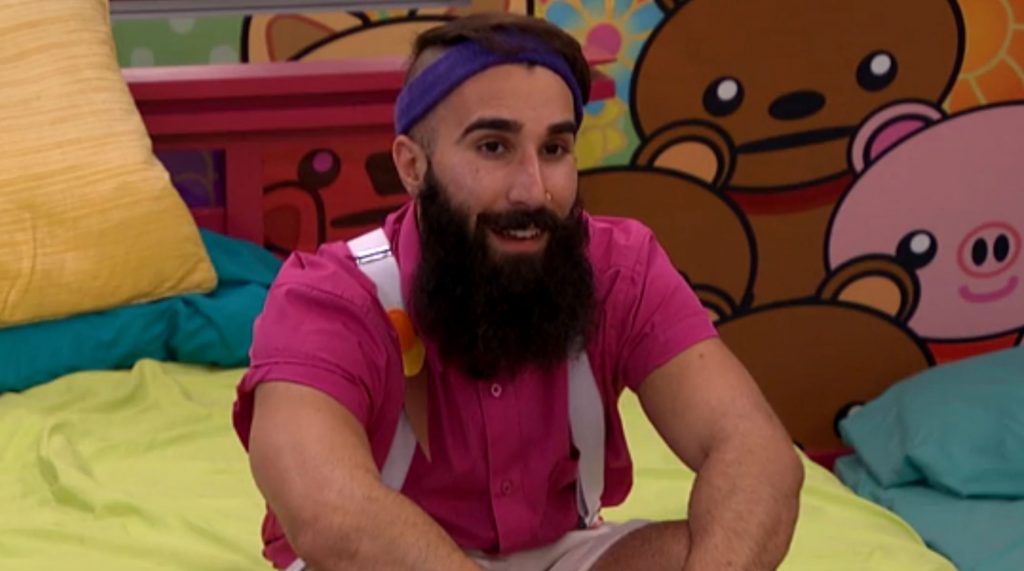 Tiffany embraces the chance to focus all her efforts against DaVonne at this point.  DaVonne asks her briefly what her plans are with the Roadkill replacement nominee – Tiffany doesn’t know yet and DaVonne immediately leaves, sending Tiffany into more of a frenzy.  Oh, DaVonne, you bungled this up pretty poorly.

So the pics above are when Tiffany lays it all out with Frank, and with Paul, about all the alliances that had existed (Fatal 5 and the other grouping where DaVonne was a “fifth wheel”), and that she’s happy to work with them to make sure DaVonne is the target this week.

The Hair Whip Heard Round the World 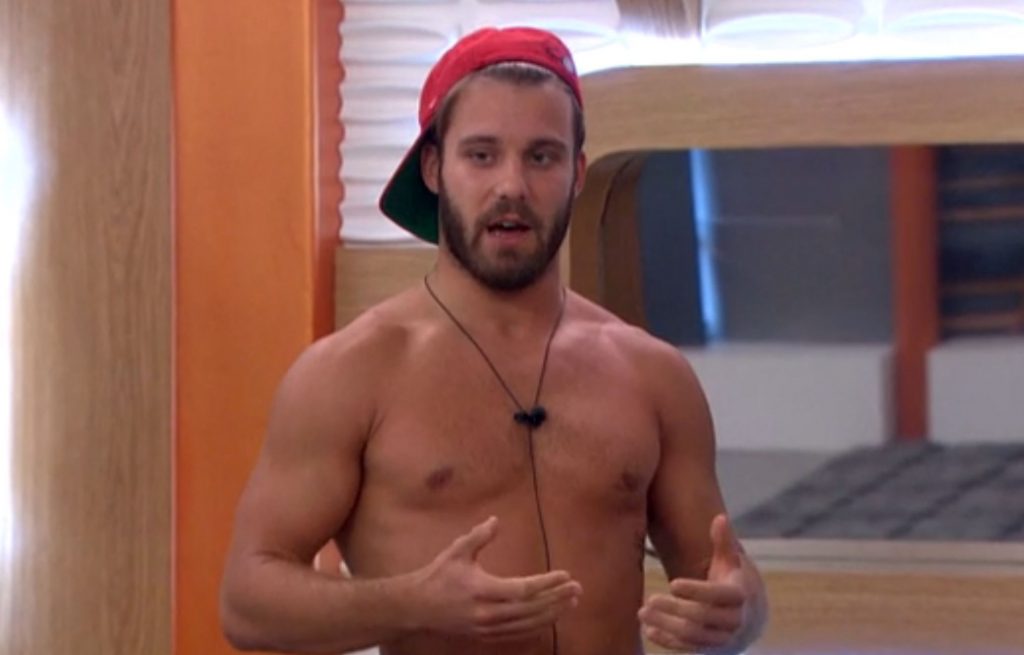 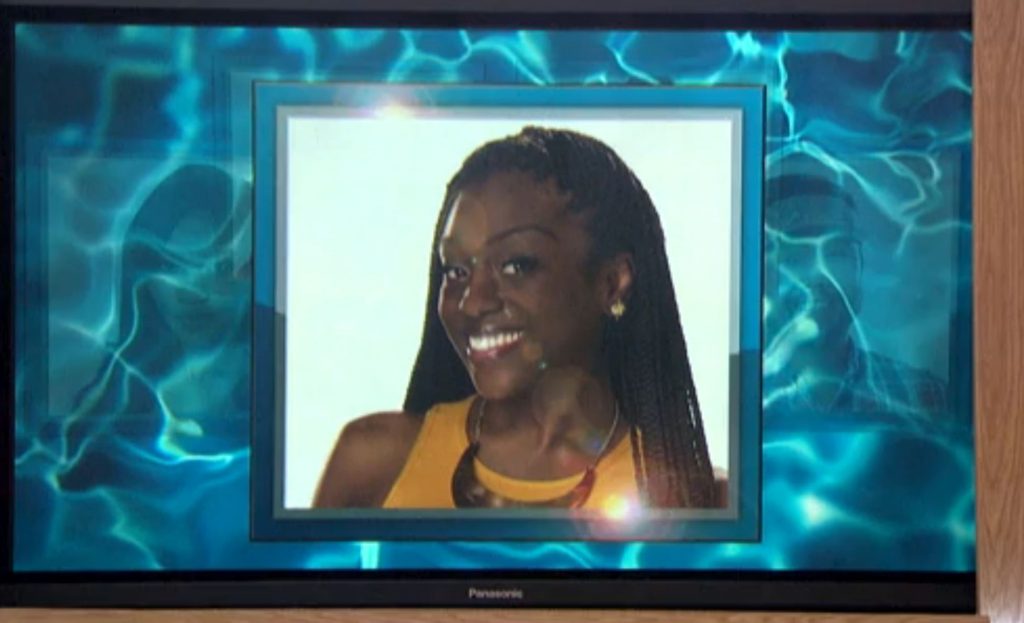 It shouldn’t have been a surprise with all the build-up from before for us to see DaVonne up there, and sure enough, the Roadkill replacement is her.  DaVonne caused this herself by being a bit overzealous in her paranoia and strategy.  Of course, Tiffany was a wildcard that is hard to manage, but while she did a good job initially, it fell apart pretty quickly once DaVonne started getting scared.

Didn’t stop this moment from being epic though.  Here’s her hair in mid-flip as she sits down.  I gotta say, DaVonne’s DR sessions are the best, and while her game is better than last time, she still has a problem with ticking off the wrong people.  But this isn’t a post about DaVonne’s eviction, is it?

The Bus Throwing of DaVonne

The houseguest now had a decision to make during this week’s eviction:  Do they evict wildcard Tiffany OR Do they evict DaVonne, whose loyalty is uncertain?

For her part, DaVonne does reach out to the few people in power on her side, Zakiyah and Paulie, to confirm that all is good, or at least not terrible.  But Tiffany is not going down without a fight, so she’s off to see where others’ heads are at…. 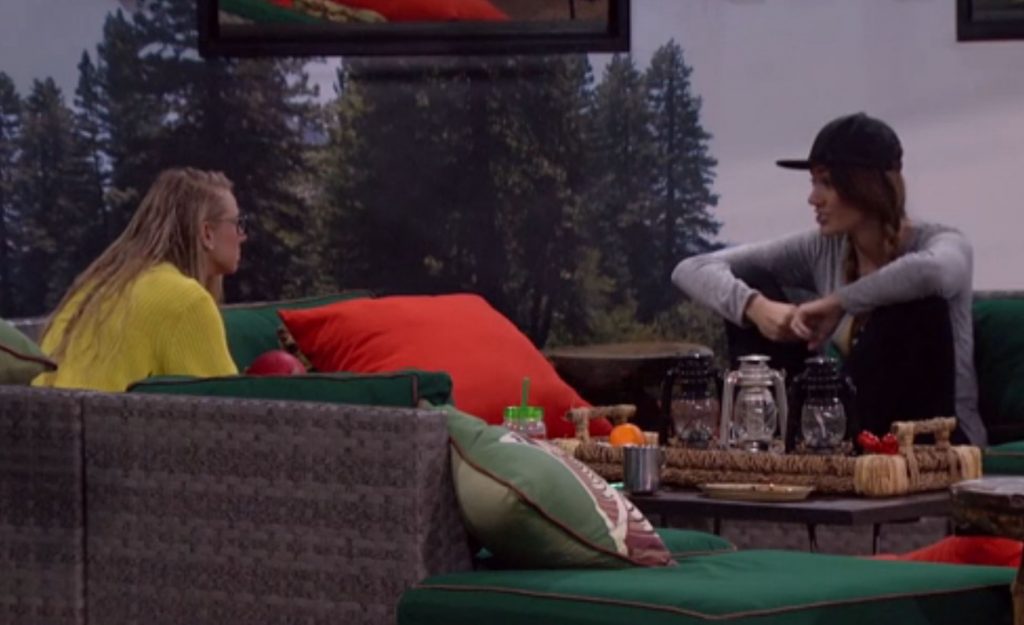 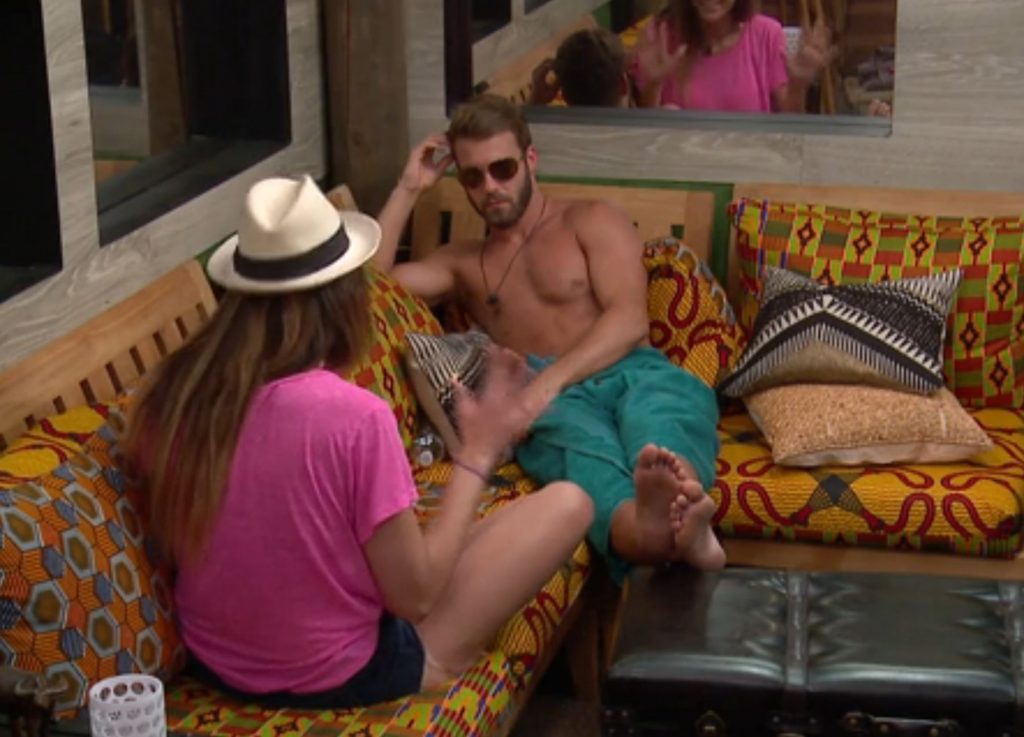 ….and makes a pretty good showing of throwing DaVonne under the bus, informing both Nicole and Paulie that DaVonne had told her about the 5-person alliance.  It was at this point I thought for sure DaVonne was a goner, as these two are definitely in a power position.

Then, in an epically bad move, DaVonne tells James that it’s time to target the showmances, implying Corey/Nicole and Zakiyah/Paulie.  But oops, James/Natalie are a thing too.  I don’t focus too much on them in these recaps thus far as it’s boring as hell.  What happened to fun-James?  Guess he needed Meg and Julia around to be entertaining?  But yeah, he immediately responds with incredulity as hello, he’s in a showmance too!  DaVonne reassures him that he’d be at the bottom of that list, but to us, James isn’t buying it.  This rejection seemed to seal DaVonne’s fate, right? 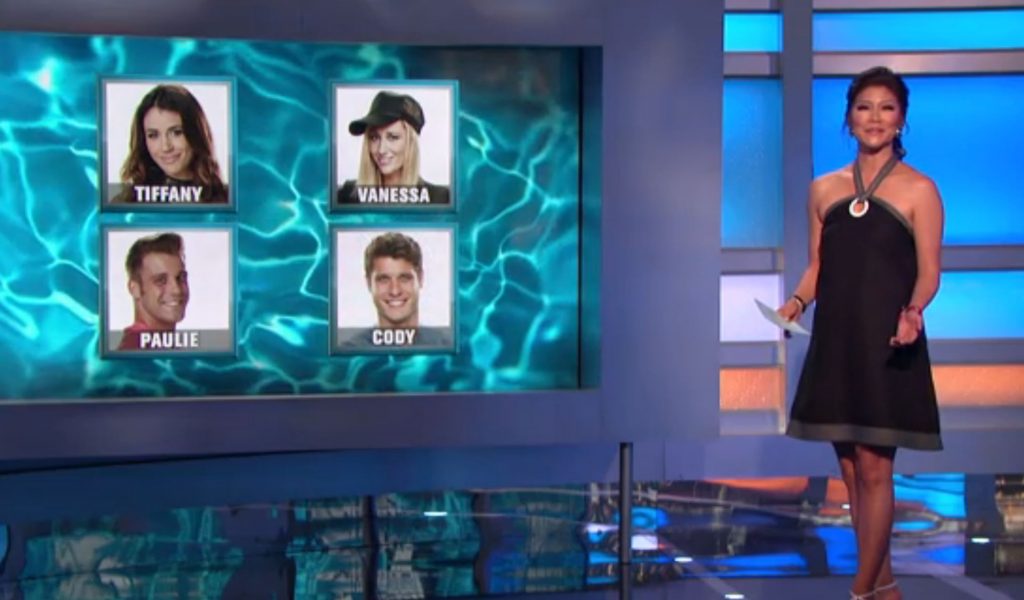 Normally, these outside-the-house updates do NOT interest me all that much.  But in this case, an exception was made to cover it here: 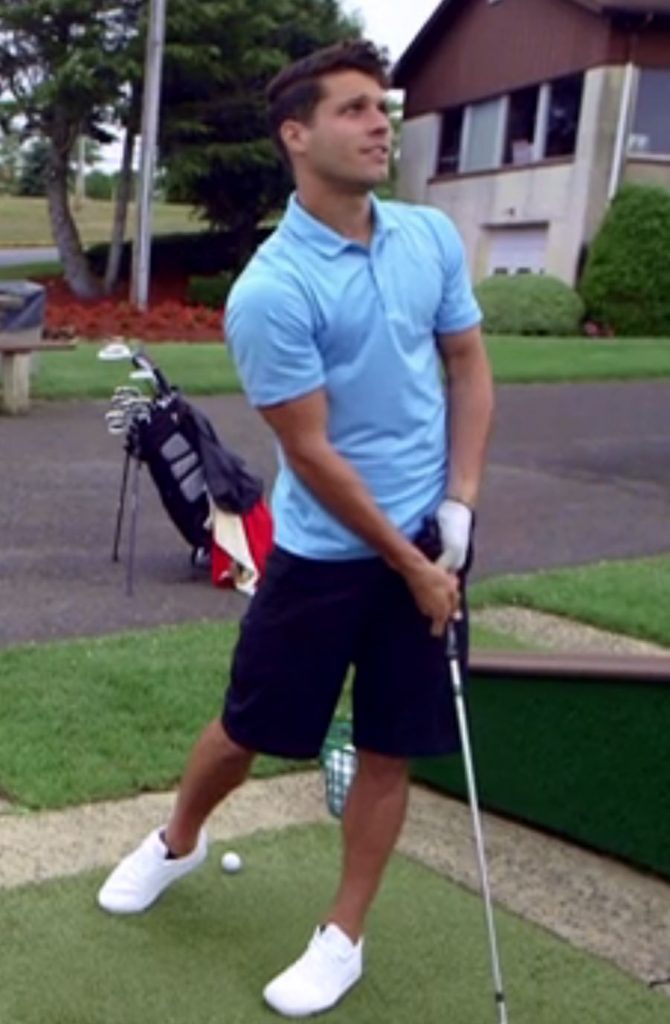 Cody is still soooooo damn fine.  I think not seeing him all that much and only seeing Paulie started swaying me that maybe Paulie was the hotter one, but hot damn.  Cody is such a piece of hotness.  Anyway, Cody had been hoping Paulie would stay away from a showmance (d’oh) and get a strong partner to ride-or-die with until the end (he had hoped for Tiffany to be that person…d’oh!), so clearly Paulie isn’t playing that game.  Cody still thinks Paulie will make it really far though.  I mostly agree, although I’d be stunned if the rest of the house doesn’t realize Paulie is a HUGE target. 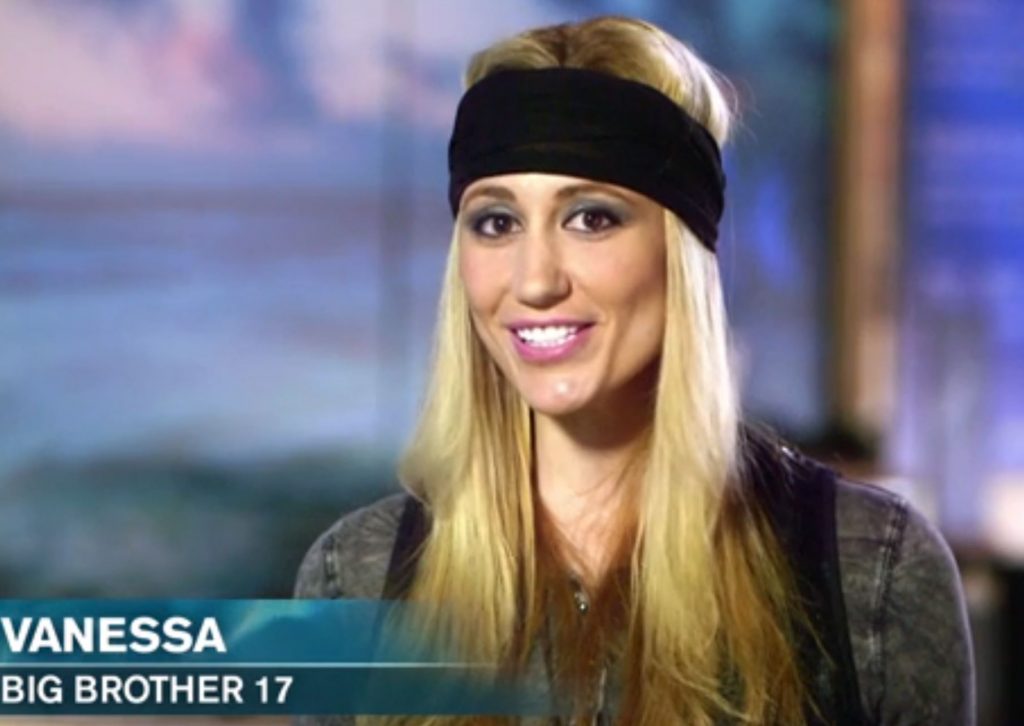 We also get to check in with Vanessa, who doesn’t seem to be much different than before.  She thinks Tiffany finally is embracing the power she has, and if she can just survive this week, she’d be set to go really far.  Honestly, I agree with that assessment, but the task at hand was pretty damn huge. 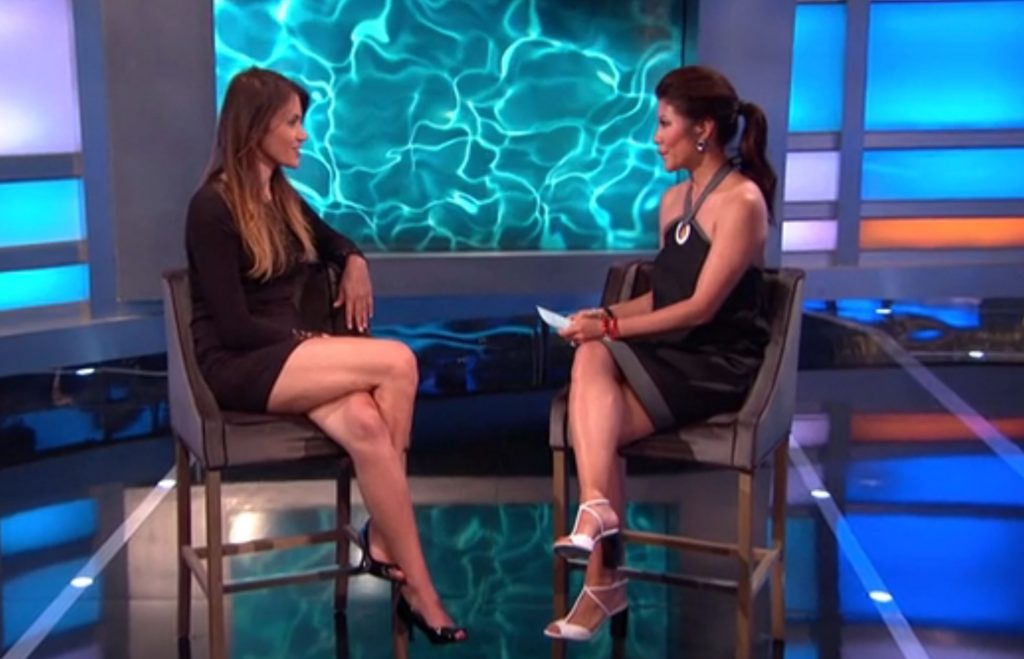 In a first for the season, the eviction was unanimous.  Frankly, I’m surprised.  I completely expect to get some explanation about what happened, as the editing in these two episodes implied a whole lot was afoot in DaVonne’s possible downfall.  I get you have to build suspense, but this wasn’t even a close vote.  So we better learn what the hell happened, and if those conversations we did see were basically just to humor Tiffany but as soon as they were over, they all rolled their eyes at the camera.

DaVonne’s goodbye message was quite bitchy, but still funny.  Regarding what she’d do differently if she could go back, Tiffany says she’d not be so emotional, which cracks the audience up.  That’s an impossible task, sorry to say.  Julie also surprises her with the news that there’s a chance to go back in the house with the BattleBack….which I’ll cover in a post coming up pretty shortly! 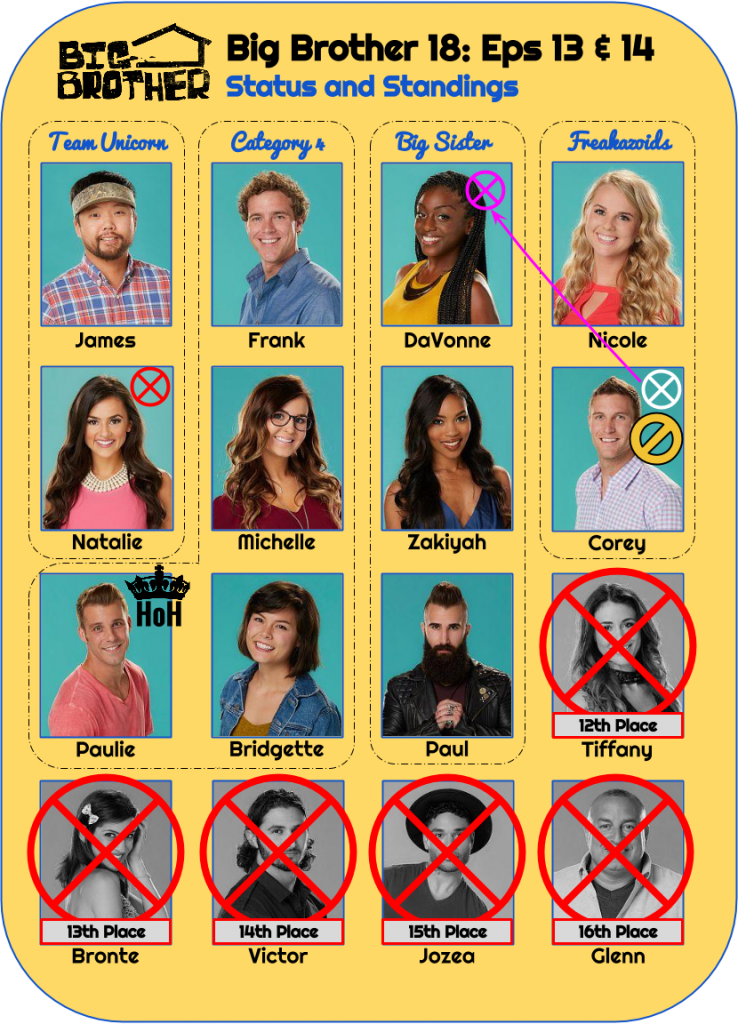 The happiest news of all was saved for the end of the episode though:  Julie revealed that both the Teams Concept AND the Roadkill twist are FUCKING OVER.  Hallelujah!  But there was a FOURTH episode this week, on a Friday, to cover the BattleBack competitons…so let’s get to it!

Next, let’s find out who wins their way back into the house! –>

A pretty sweet stitched together photo from the summit - right side had a bad line though!
View at Picasa