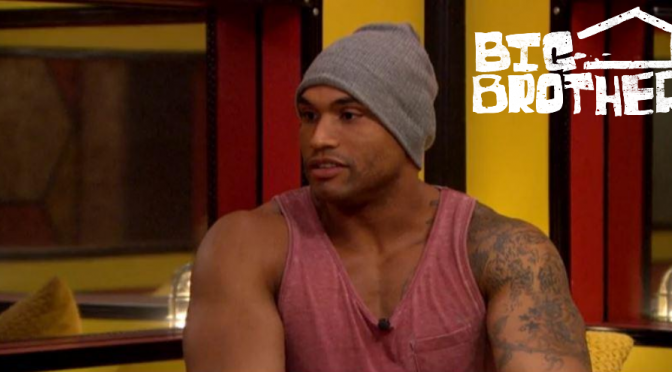 People ALWAYS overplay this game, and pretty much it’s always to their own detriment. Â So enter Devin, our resident “The Rock” lookalike, Brendon-soundalike, and sweet father of one. Â Purely from an objective review, he’d be great to have in your alliance due to strength as well as not being a total lunkhead. Â Yet he smashed that impression to bits in last night’s episode when after a whole 1 or 2 days in the house, he decided to play EVERY STRATEGY. Â Whew. Â It was exhausting watching his paranoia go into effect. Â Also, almost kinda hot at one point, when he confessed his deeds to Caleb in the middle of the night, in Caleb’s bed. Â Commence fanfic….now!

Birth of the Bomb Squad 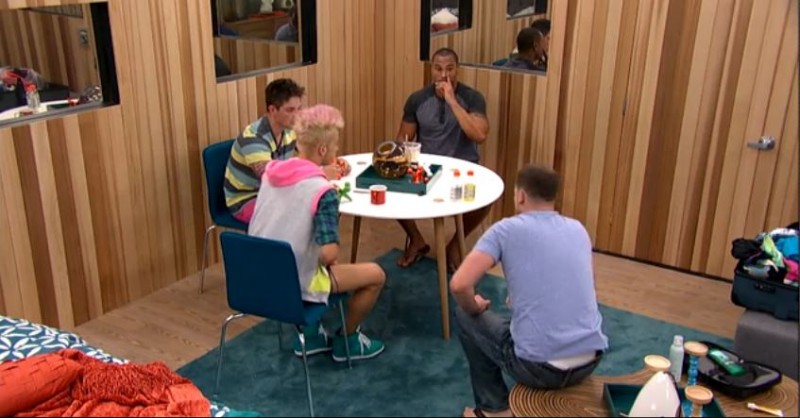 What deeds did he confess to? Â Well, that entails starting a little bit further back. Â We have to talk about what happened early on in this episode, when Caleb and Frankie decided to work together after spending some alone time in their new HoH rooms. Â Not only that, they wanted to reach out and have some soldiers. Â Enter Devin and Derrick. Â But then Devin wanted about 6 people, so he brought in some other dudebros, Zach and Cody. Â Frankie was thrilled that he was part of this alliance from the get-go without having to infiltrate; Derrick was rightly skeptical of the whole thing, as was Cody. Â Regardless, they were in. Â Of course Zach was all for it because he’s a douche. Â But that goes without saying. 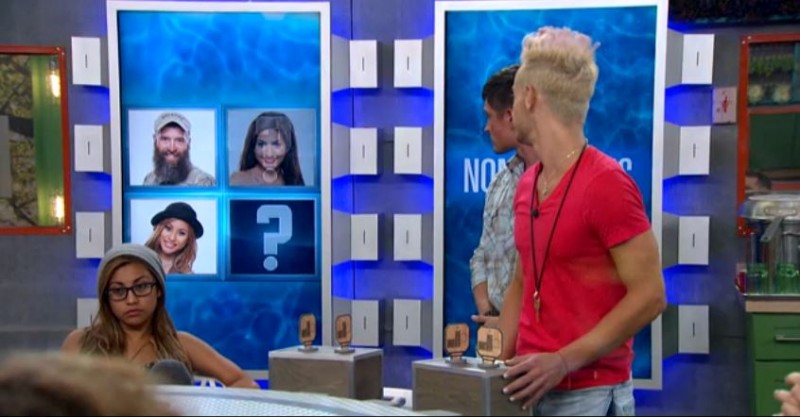 We’ve got an accelerated episode OR we’ve got a new episode structure, in which the nominations and the Battle of the Block happen in the same episode. Â I’m okay with that – I’d rather get right to it as opposed to the nominations being the “cliffhanger”. Â We do lose the big Lazy Susan key case though, which always was good for some dramatic buildup, and now we get a detonation box that reveals the nomination on the big ass television monitors in an effective time-saver. Â The Bomb Squad was targeting anyone not in their alliance while aggressively going after perceived “floaters”. Â The nominations were innocuous enough at this point, as the HoHs gave good justifications about why Paola and Donnie (Caleb’s nominees) and Brittany and Victoria (Frankie’s nominees) were put up. Â Yet of course there was still emotional response. Â Victoria was beyond shocked that Frankie, of all people, nominated her; Â Brittany was just sad to be targeted; Â Paola was all whatever as was Donnie. Â Surprisingly, it was Caleb who was empathetically crying for having to make nominations in the first place….leading us to our first:

Cody vs Caleb: Who Was Hotter?

Cody is not doing himself any favors by getting such little screentime. Â I was prepared to give him the win by default just because Caleb wore that stupid-ass blue baseball hat in such a douche-y manner. Â I refuse to screenshot it. Â But then Caleb went and got all sad-puppy on us, and dammit (!) he was able to sway my vote his way. Â I give you:

Cody was definitely looking good this episode, but there was just very little to work with. Â Caleb was all over this episode, so in this first competition, Caleb emerges victorious. Â  Good luck, gentlemen, on your next match-up. 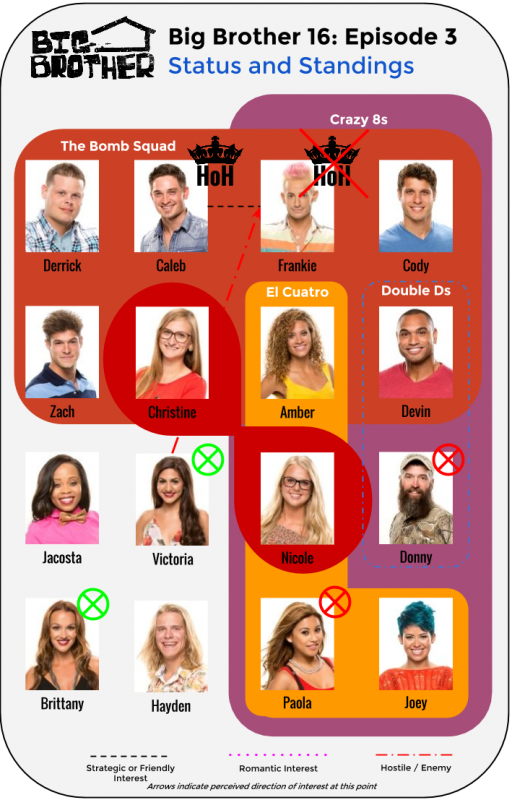 After today’s episode, a lot of relationships changed. Â Of particular note: 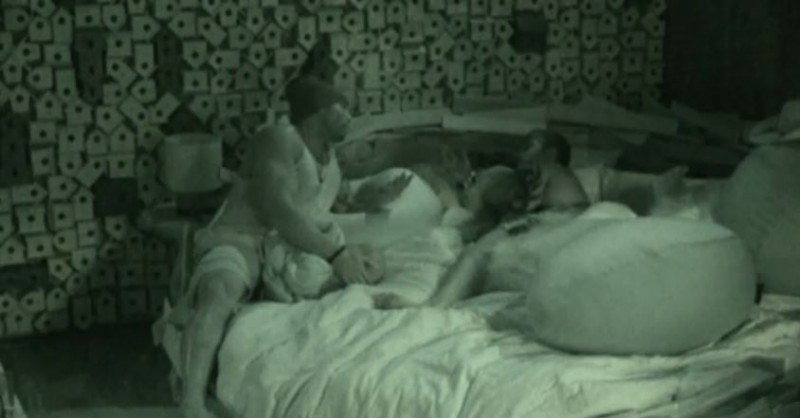 Let us count the ways:

Oh Devin, you had such potential. Â But you’ve sabotaged your game to a ridiculous degree. Â You are sooooo gone. Â It may even happen this week.

The First Battle of the Block! 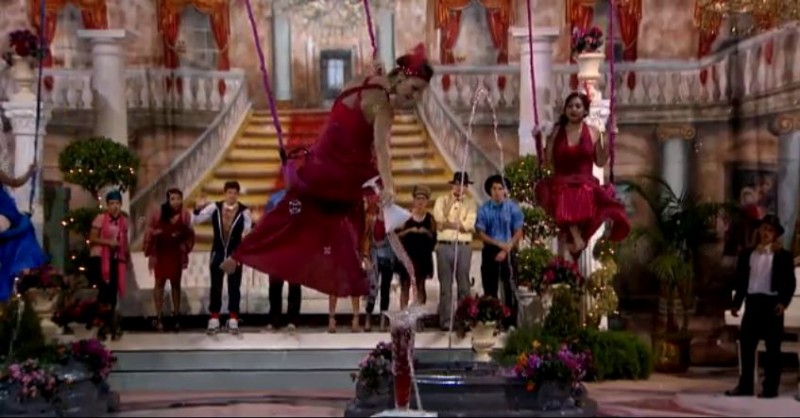 CBS has gone all out in the setups for their challenges so far – I guess now that they’re in HD, it’s time to pull out all the stops. Â Hell, I was blown away by them before but now it’s just ridiculous. Â In this challenge, the backyard was set up like a 1920s Gatsby party, and the nominated houseguests were on swings, with the goal to transport champagne from the fountain to a glass vase, but having to pass the wine from one partner to another while swinging. Â This was a really interesting challenge mainly to watch Paola’s CRAZY faces when struggling to even get moving. 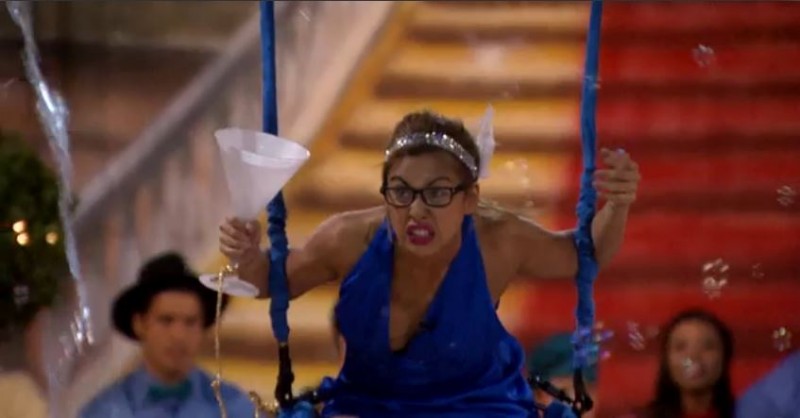 In the end though, thanks toÂ PowPow’s craptastic efforts to get moving, Brittany and Victoria handily won and secured their escape from the nomination block. Â This victory also had the side-effect of deposing Frankie as HoH, leaving Caleb as this week’s HoH.

4 thoughts on “The One Where Devin Loses His Mind”