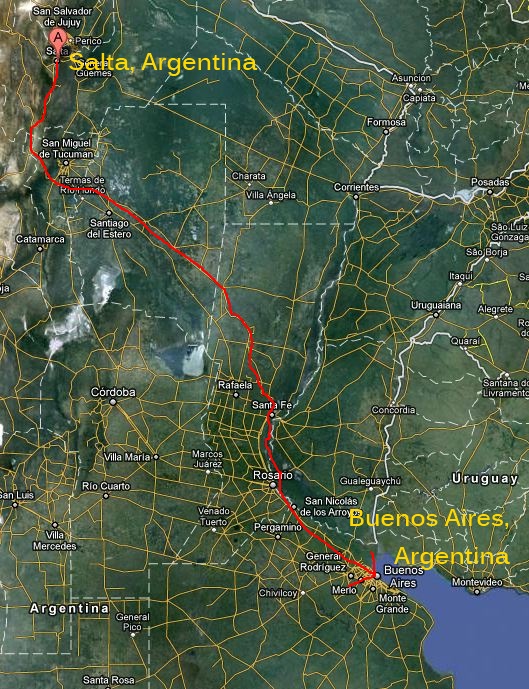 Ah, the second leg of a season of The Amazing Race. Â Always when the racers realize that this is not going to be easy and everyone hits that wall of exhaustion. Â In the secret scenes on the CBS website, which I’ve finished my recap for already, Vanessa made quite an astute observation. Â She hates the traveling in-between locations part and wishes life was just like an episode of the race, with an editor there to cut out all the exhausting travel stuff. Â As a viewer, it definitely is edited for maximum excitement as who wants to see the tedious and draining efforts of figuring out how to get some rest while schlepping across the world. Â I think that’s the part I consistently overlook when dreaming about getting on this show. Â I get irritable after just a half-day’s worth of traveling. Â Imagine the bitchiness I could embody with over a day straight of traveling and then having to sleep in airports. Â Ugh.

So what were our racers up to this leg? Â They didn’t get to leave Argentina, that’s for sure. Â As I saw in the secret scenes, my beloved twins (actually, I’m really only attracted to short-haired Andrew, and I pretend that his tattoos are not actually there) had quite the mess-up to contend with as they had misplaced their car keys from the first leg. Â They knew that they would be somewhere in the empanada station and sure enough, after the leg started, the keys were still where they left them. Â I’m shocked, to be honest, but I’m sure the production team noticed them and kept the villa’s crew from cleaning up everything. Â It was neat to see the aftermath of a challenge. Â Anyway, here is my first gratuitous picture of hunky Andrew. 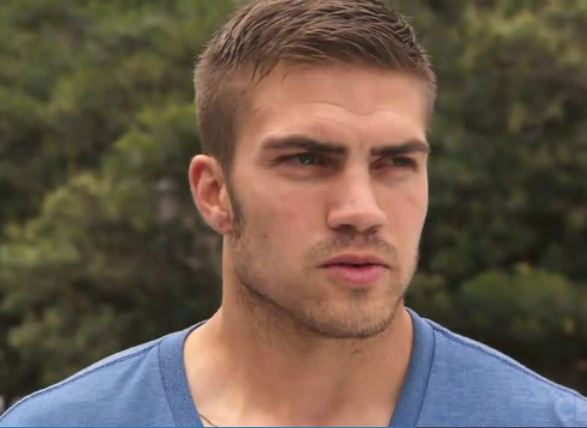 Goodness gracious, that man’s hair never seems to be ever disheveled. Â How is it so fair that he is that good looking and has that perfect of hair? Â  Fortunately, it doesn’t seem that he’s that bright from the videos I’ve had to recap, so I will content myself with the knowledge that I’m probably smarter than him.

The leg started off with an equalizer as the teams had to wait for some mule-bound messenger to show up first thing in the morning. Â Hot Major & wife’s lead was wiped out as everyone bunched up. Â I honestly don’t mind equalizers at this point in the race, or really, any time in the race. Â It keeps things interesting. Â Strong teams will naturally pull ahead, as was demonstrated in this episode. Â The first challenge was a Detour and their choice was between making a solar-focusing contraption that when build correctly would use the sun’s rays to boil a teapot of water. Â Fun! Â The other was to load up a donkey with firewood and march the donkey somewhere. Â Less fun! 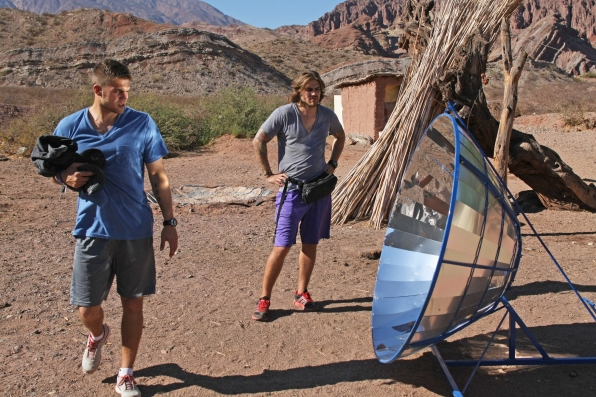 I would have chosen the solar option, as did every team except for the border agents. Â I have ceased liking Art & JJ, as the secret scenes show that they are thisclose to showing their right-wing tendencies. Â Doesn’t mean that I don’t respect that their gameplay is pretty good thus far, and they’ve convinced themselves that they are just as good as Hot Major & Wife. Â As it is now, they’ve worked together well though and will probably continue to do so. Â Yet Art & JJ need to realize that Hot Major & Wife will always outrun them, so it’s really not in their best interest to team up if they ever want to WIN a leg. Â Anyway, most of the teams eventually figured out how to make the solar dish (clowns, not so much, who needed another team to clue them in) while Art & JJ went from seemingly last to second place when their donkey gamble paid off.

The race was then off to the Bus Station so that teams could get on an 18-hour bus ride to Buenos Aires. Â Dear God. Â That sounds positively horrible. Â I remember when Ryan Conk and I went on a Greyhound bus ride from Charleston, SC to Fayetteville, NC, transferring to another bus that took us to Norfolk, VA. Â Longest evening of my life. Â It looks like there was at least the option to have your seat turn into a bed, but still. Â Then the “incident” occurred in which the second bus (of three) had a window mysteriously shatter allowing the third bus to overtake them. Â Do I sense producer intervention? Â Yes. Â As I read somewhere else, a 4-way race to avoid elimination is much more interesting than a 2-way race. Â It also lets there be the additional drama of those two teams think they’re in last and then you surprise them. 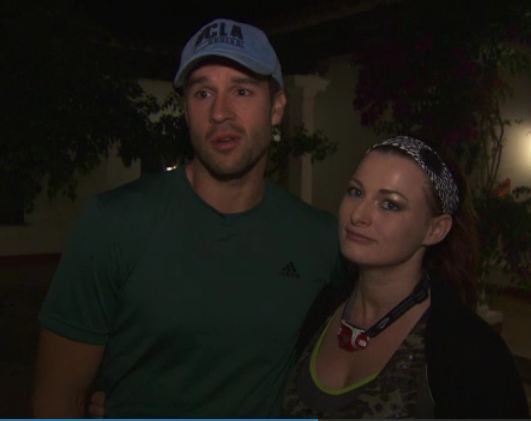 I couldn’t let my favorite Big BrotherÂ contestants not get some photo time on my blog, so here are Brendon & Rachel right before starting this leg. Â They jointly declare that this is much harder than Big Brother! Â Rachel also got super pissed at Brendon at the end of the race but I really can’t remember why. Â That could be said of pretty much every fight they have ever had, as it’s almost always idiotic. Â But I wouldn’t have it any other way.

After arriving in Buenos Aires, it was off to a cattle clearinghouse where the Roadblock forced a teammate to recall how to do elementary-school math, namely long division. Â In a telling portrayal of how bad the majority of Americans are at math, almost every team had problems. Â Not all, but there were some pretty poor performances here, including Rachel for a while as well as of course, Dave (Clown-variety, not Major Hotness). Â They had to listen to the grand weight total then divide the number of cattle in that pen to determine the average. Â Not hard, people. Â Not hard. Â Hot Major’s wife teamed up with Art or JJ and knocked it out of the park before Rachel and Mark (of Bopper & Mark) realized that they had teamed up. Â Rachel and Mark sorta teamed up and both managed to get it and out of there before the next bus of Nary & Jamie and Kerri & Stacy showed up. Â These two also didn’t have that much of a problem, admittedly, but they both thought they were competing for last place. Â Finally, the third bus group showed up and Vanessa (love her!) finished first until it was the Douches, the Hot Twins, and the Clowns left. Â Douches and Twins teamed up at the expense of Dave the Clown, who was absolutely lost with regards to math. 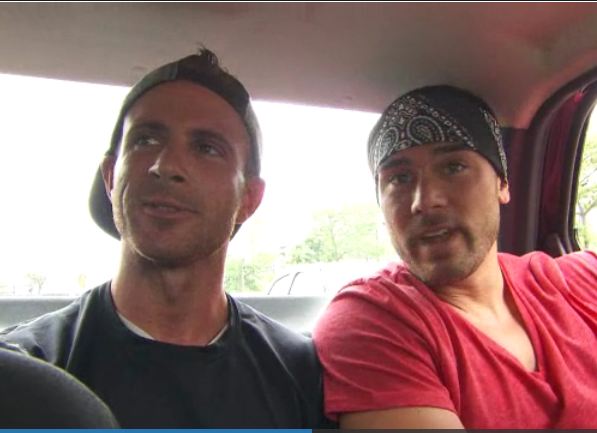 Â The Douches and Twins got their shit together and surprisingly got the answer, although it wasn’t clear how long or how many tries it took. Â But they were off and running to find Phil at the Pit Stop, leaving poor Dave to get the tragic music cues as he continually failed at actually figuring out the math problem. Â I read in the RNO interview that apparently Dave is dyslexic so that on top of a stressful situation led him to just lock up. Â I will say that he & Cherie were very nice, but it was clear from the start that they weren’t in this for the long haul. Â Very very clear.

It looks like in the next episode, there’s more Rachel drama, and to that, all I can say is “duh.” Â I think she’s flipping out on Brendon some more, but also picking fights with other teams. Â I’m sure it’ll be with another female as that’s who she ALWAYS picks fights with as there is some serious insecurity there. Â Hopefully Hot Major gets a bit more personality, although from what I’ve seen in the secret scenes, it seems he’s quite a control freak. Â That’ll be fun when they finally aren’t in the front of the pack, as it’s inevitable they fuck up sometime.

On to the standings!