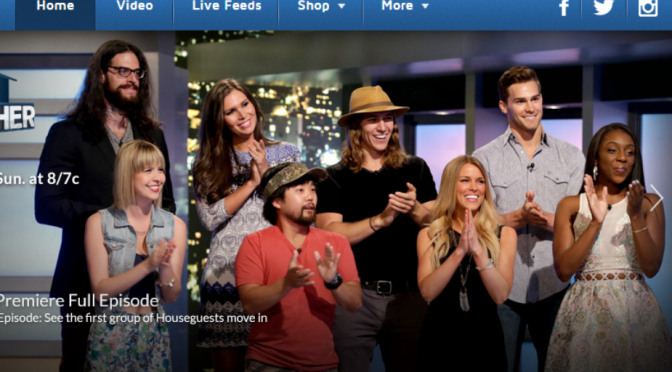 Like I just wrote earlier today, I honestly can’t believe that we’re back already. Â What the hell happened to the rest of 2014 and the beginning of 2015? Â Oh yeah, a SHIT TON of things happened. Â That makes it so much more surprising that we’re back here living our lives around theÂ Big BrotherÂ schedule, because that’s what one does when the world’s most addictive show is back on the air. Â Who needs sun or work?

Anyway, remember last year where the first thing I posted was all about the hotness of Cody? Â DEJA VU, MOTHERFUCKERS: 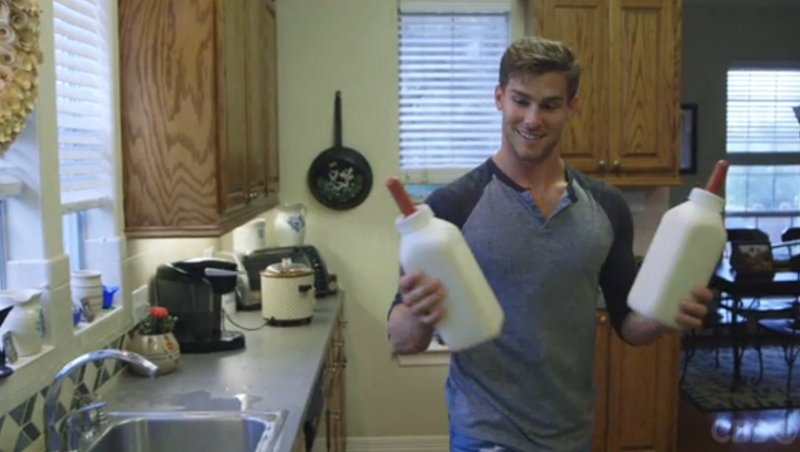 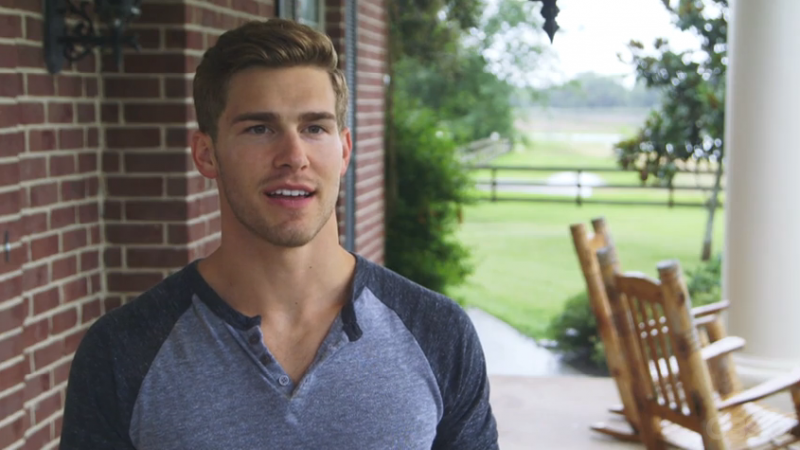 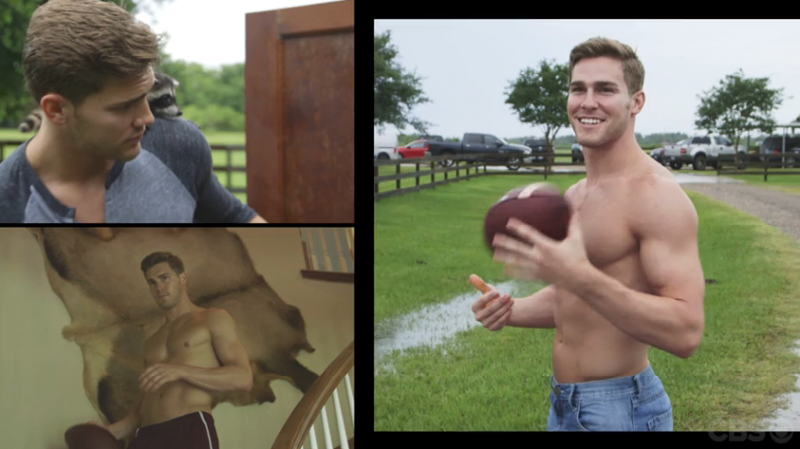 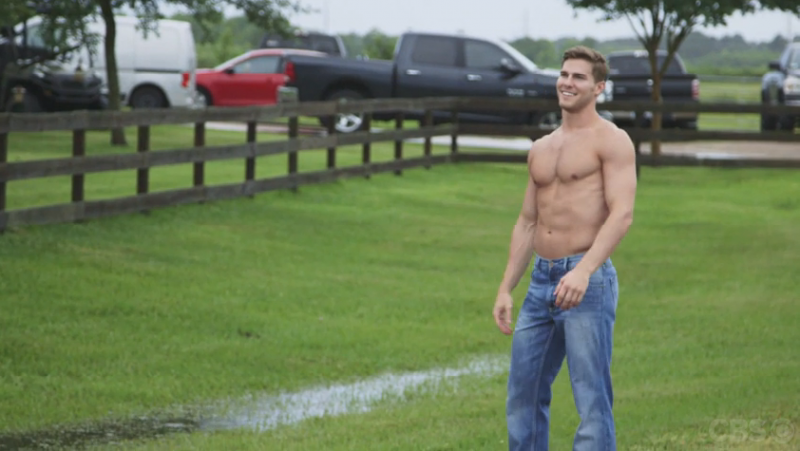 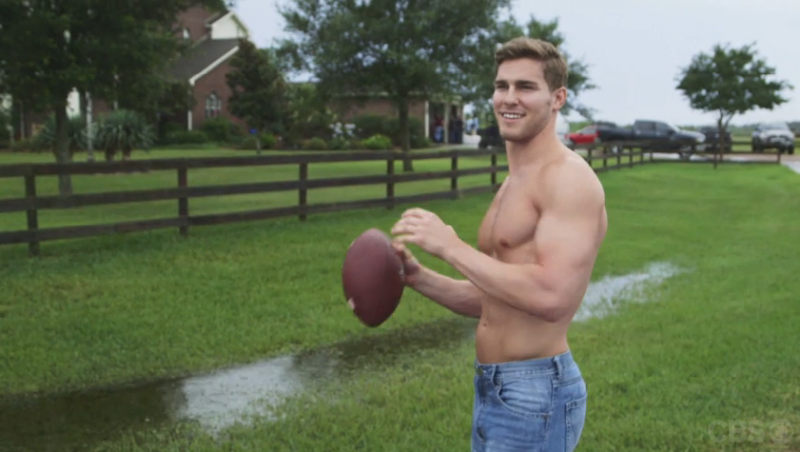 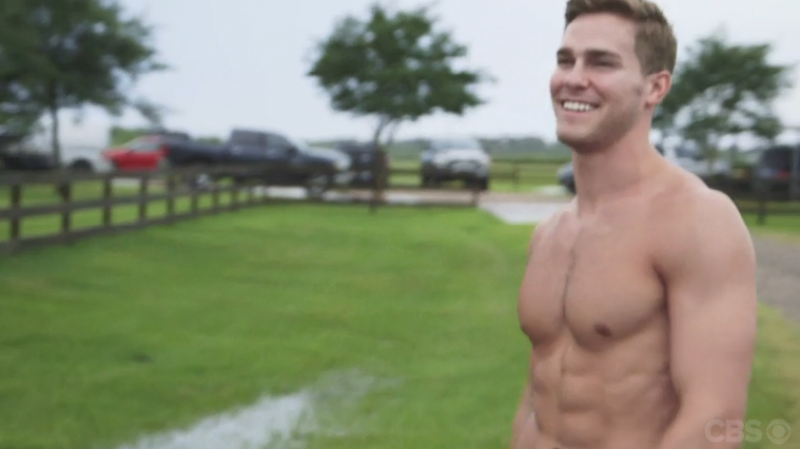 Maybe I got a little carried away with the screenshots…but maybe I didn’t! Â Maybe I need to learn how to make animated GIFs and capture this whole fucking moment because it was glorious and ridiculous. Â I hereby sign up for the Clay BB17 Hour, sponsored by Chippendale’s. Â DAMN BOY. Â Please pull a Cody and make it to the end of the show. Â I can’t deal if the only real eye candy this year heads out fast.

Okay, with THAT out of the way, here’s the lowdown on everyone else we met, as if they matter:

She’s a waitress from New York City and seems to be a lot of fun. Â Reminds me of a much less spastic Joey from last season. Â Plus, the girl is friends with Andrea from two seasons ofÂ Survivor, who was all hanging out with her as if we didn’t recognize her. Â Unfortunately for her, the other girls didn’t bring her into the alliance talk.

Yeah, so I think I was caught completely unawares of how James would speak and act from just his picture. Â Racist! Â But still, it’s kind of awesome how southern he is and talks and acts. Â Way to challenge preconceptions! Â Plus, with his early HoH win, he could be an early favorite…or target.

In this picture of him, I swear he looks a lot like Blake Lively. Â Anyway! Â He’s a goofball Xtreme sports guy from Venice and reminds me heavily of Hayden from last year. Â Hopefully for him he’s a bit more sophisticated of a player than Hayden, but I’m not optimistic. Â Either an early boot or kept around forever as a vote.

A pretty and athletic woman from outside Atlanta, Georgia and ready to win it all…and we find out a bit into the episode that she’s the first transgender woman onÂ Big Brother. Â Happily no one freaks out and is pretty cool with the whole thing. Â Go, Audrey. Â Plus, she’s already playing the game hard and working alliances with the other girls. Â Interesting to see how this plays out.

A huge guy who claims to have a secret Judas side, which is the character that comes out when he’s wrestling professionally. Â Has already lied about his physical state to the others, claiming he’s got lots of injuries. Â I think he could be kinda cute if he sheared his fur off. Â Also kind of wondering if he’s a Subtle Gay, based on comments he’s made. Â Will be monitoring the situation.

A single mother from Inglewood who is an experienced poker dealer, she came in to the house with no pretenses. Â She’s here to win and get that money, and I have nothing but respect for that. Â Plus, she’s been funny so far, so I’m hoping she will stick around and show that she’s got what it takes to win.

HOT DAMN. Â I wonder if it’s a better thing to have just one piece of singular hotness to focus on rather than have some meaningless competition between another hot guy like last season…but I mean seriously, it was hilarious to see every woman go in to the house and immediately say, “DAAAYYYUUUMMM.” Â I don’t even care thatÂ Big Brother was completely pandering to us with that montage of shirtless football playing. Â You could tell even he was laughing about it. Â I do worry though about his long-term prospects. Â Prove me wrong, Clay. Â And burn your shirts. Â All of them. Â  For the people.

The last houseguest we met. Â Honestly, none of the women this year seem to be ditzy, at least not yet. Â I mean, Shelli is part of the initial, tentative girls’ alliance, she’s already having the Heart Murmurs Club with Clay (bitch!, I mean, that’s nice), and I like her. Â So she may have the potential to go far. Â But you know these snap judgments aren’t worth a shit after Week 1.

I will spare you recaps of all the nitnoid small talk shit that surrounds the initial entry into the house. Â Or will I? Â Some things were kind of interesting around what was chosen to be revealed: 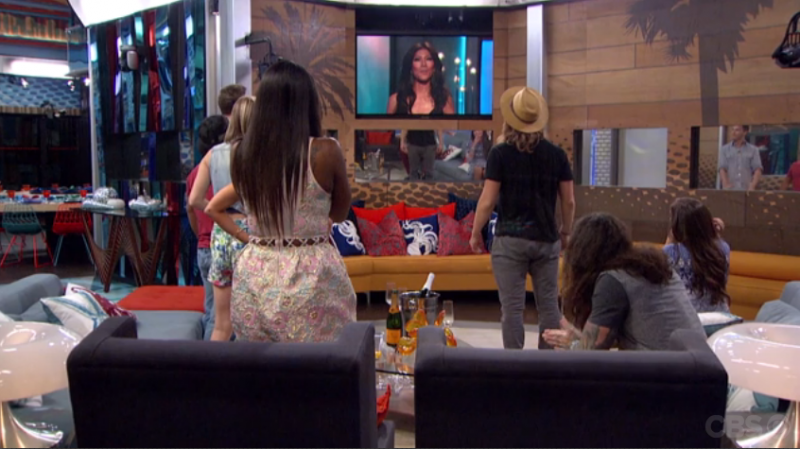 The First Tentative Alliance of the Season 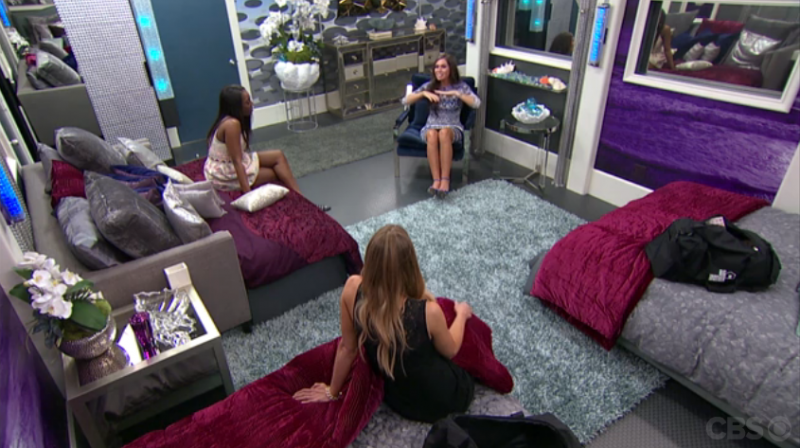 Every year is kind of the same, isn’t it? Â Usually the alpha-male guys of the group immediately click and bond and declare an alliance and almost always there’s a complementary group of girls who also decide that the girls need to stick together and take out the guys. Â Not to generalize too much, but this almost always dissolves in about Hour 5 of their time in the house. Â Do I think that Da’Vonne, Audrey, and Shelli should work together? Â Absolutely. Â They have so far been shown to be intelligent and observant of the game, and supportive of each other. Â I thought for sure Da’Vonne was going to privately tell us that she couldn’t believe Audrey was milking the group for empathy when telling her tale about how her family ultimately embraced her, but then she surprised me with complete support of the move and recognizing that’s great for their alliance. Â So we’ll see if the Nameless Alliance can stick together. Â Prove me wrong, girls! Â Oh yeah, the other divergence from tradition was that instead of discussing alliances, the guys ended up talking about working out. Â Maybe that’s the same thing?

The First Head of Household Competiton of the Season 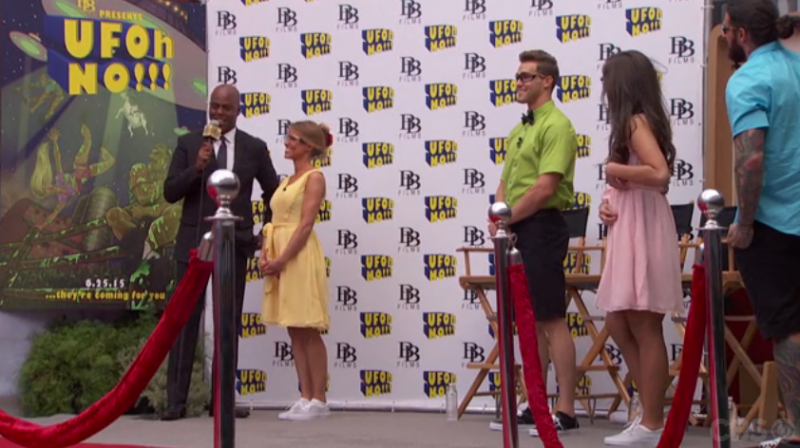 It started off kind of painfully, with some guy fromÂ Entertainment Tonight doing a kind of red-carpet Q&A session. Â Shelli revealed a bit too much about who she’s hot for (Ryan Reynolds, who Clay does resemble quite a lot) and then it got weird when the guy (am I supposed to know who this guy was?) just keeps saying to the short, Asian James, “look at you.” Â Like, get the fuck outta here with that. Â What’s he trying to imply? Â Anyway, that mercifully ended and we got to the actual competition. Â And oh yeah, for some reason, before they even got out there, Julie required someone to not participate? Â That was odd, and while Austin was considering it, Da’Vonne immediately volunteered, but with the promise that she wouldn’t be nominated first. Everyone agreed, but c’mon now, this isÂ Big Brother. 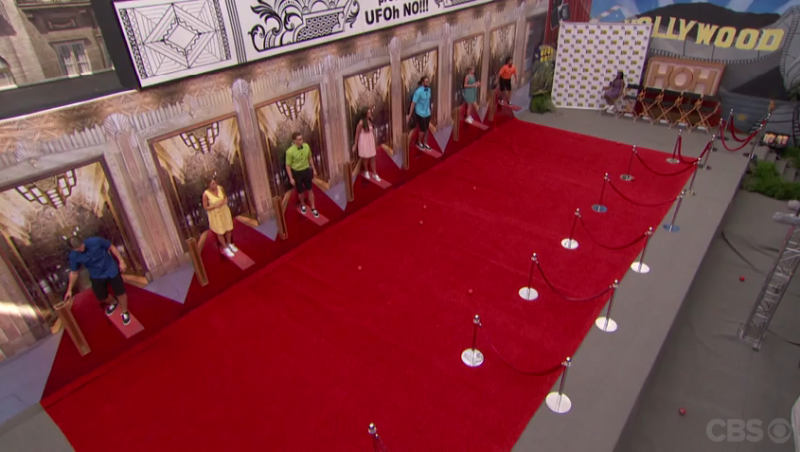 Everyone was on a small suspended platform, each of which would move in sync up and down and in and out. Â Not only did you need to stay on the board without falling off, you also had to try to catch “tomatoes” that were hurled at you every so often during the next round of “Boos” for your terrible movie you were there to promote,Â UFOh NO!!!!. Â Zingbot, save us! 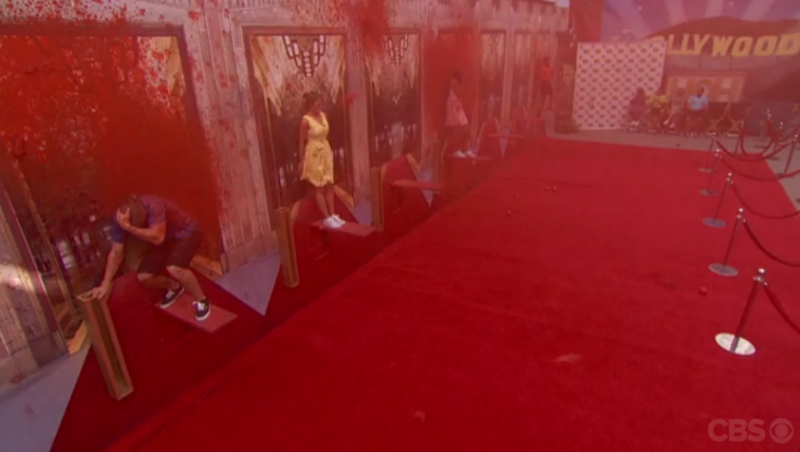 It was going pretty well for James, Audrey, and Jace as they ended up at a three-way tie with 5 tomatoes saved each, but then after a particularly jolting movement by the platforms, all 4 remaining houseguests fell off the boards. Â At the same time. Â The producers had to review the footage and see who touched the red carpet last, and in a somewhat fair turn of events, James, who had the most tomatoes at that point, fell to the floor last and won HoH. 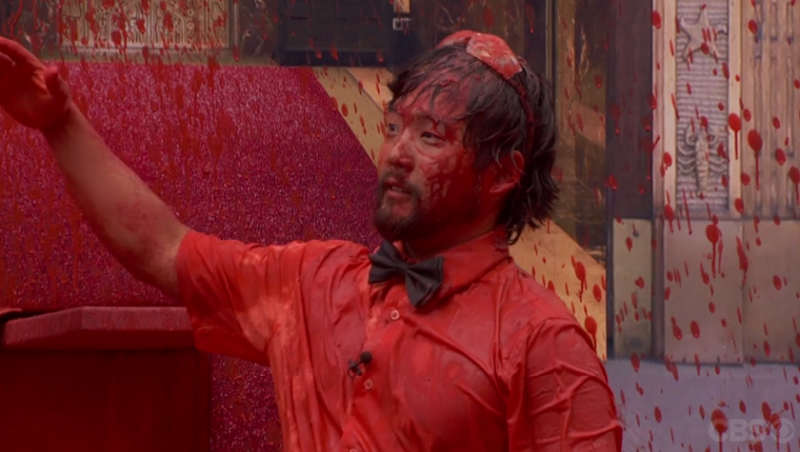 So the South Carolinean James wins the first HoH but knows that a second HoH is on its way very soon, and all the stress of trying to not rock the boat too hard will be on him. Â This first week always has to be played so delicately: Â if you do or say absolutely anything that people can use as a reason to target you, you’re fucked. Â We’ll see! Â Tomorrow night shows us the remaining 6 contestants and then we’ll get into the real nitty gritty….which is capturing more screenshots of dreamy Clay.

I have to continue my charts, so here goes with the first 8 contestants. Â I’ve drawn a nameless form around the three women who openly declared an alliance with each other and lines between those folks who had particular interactions. 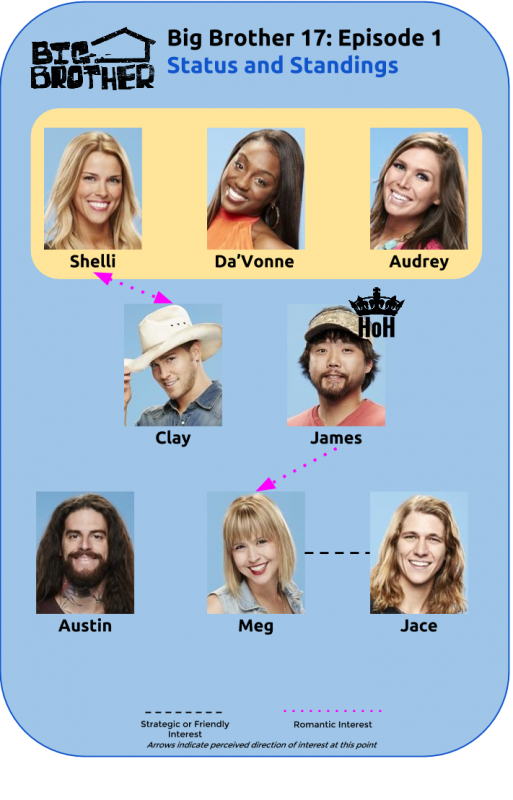