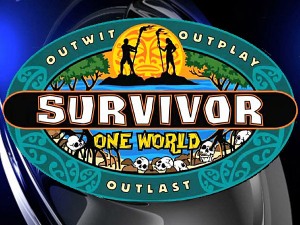 I haven’t written a full-on Survivor or Amazing Race (or even, Big Brother) rundown in a long long time.  I’ve decided to go ahead and do it again.  It definitely won’t be as fancy or ornate as I used to do, as seriously, those were works of art!  But I will use any excuse to post pictures of hot guys, and this season, there is a very VERY nice selection to choose from.  Unfortunately, they may be the most douchey contestants I’ve seen on Survivor in a long time. 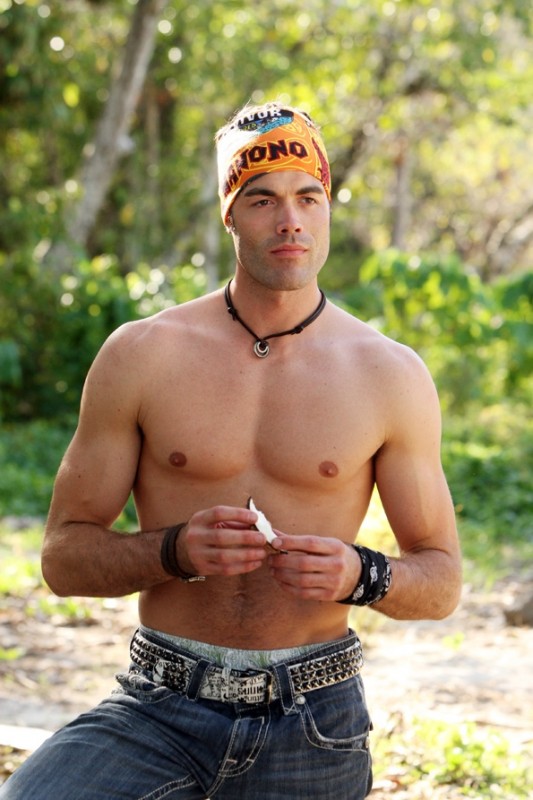 But here is a picture of one we met in this first episode of the 24th (!!!!) season.  I liken him to a younger and slightly hotter (…debatable) version of Billy Zane.  Gotta say….damn.   This mo’fo is hot.

His name is Michael and probably needs to be properly reckoned with.  I’d reckon with him all night long, if I were playing Survivor.  Uh…is it getting hot in here for you too?  Anyway, at the onset of this season, the contestants were immediately split up into men vs women, and were then told they had 60 seconds to strip (their clothes off) the truck they were riding in of supplies.  As the immediate mass chaos ensued, Michael, wearing a smart plaid shirt that fit him perfectly, sneakily started taking things from the girls’ stash of supplies.  Jeff Probst, the helpful host, even alerted the girls that they should probably keep an eye on their belongings.  They took no heed and Michael keep stealing (hearts) away, getting a prized axe.  Did I think it a dick move?  Yeah.  But he didn’t get caught and the women foolishly let it happen.  Here’s to seeing if continues to be crafty.

There was another hottie in the midst, and while I’ll post his picture here, I have to say that while he is again, quite hot, he is ENORMOUSLY arrogant and douchey.  I might have to mute the TV when Matt shows up on screen.  But here he is, in all his glory.  Well, the buff on the head makes him look less hot than normal, but here it is anyway.  Matt is not a fan of women, especially devious women who would dare 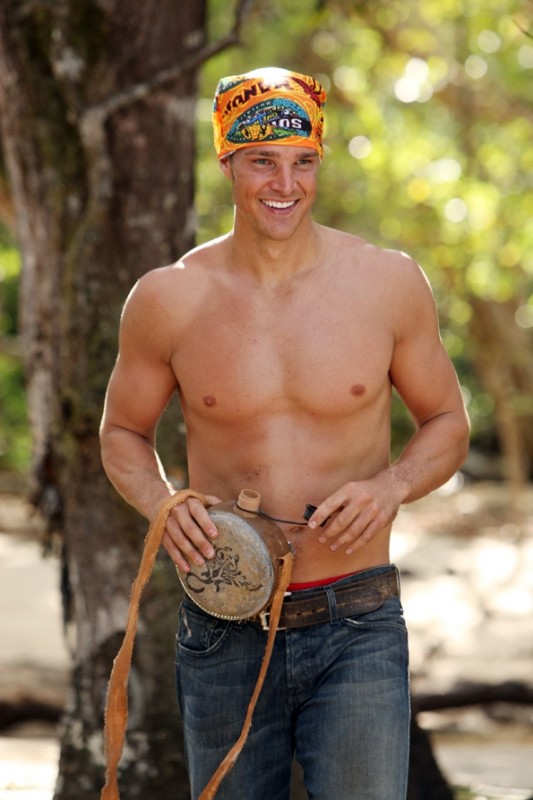 not do what he expects or wants of them.  He promises that they will pay for not sharing the chickens as originally promised, as no one ever betrays his trust.  I get the sense he’s a stockbroker type and a type-A asshole all around.  I will be sad when (there is no if about it) he gets eliminated shortly. Let’s just hope there’s some mud and oil challenges in the near future that are overly homoerotic.  You know they can get that way every now and then in Survivor.

I’ll save any more pics for below but these are the two that are quite hot and memorable, at least for this episode.  I know that there is a Jay on the tribe as well who is truly a model and again, quite hot.  I think my last picture you can see him in.

Oh, should I talk about more than just surface details like hotness?  Ah well, I guess I can do that.

After the 60 seconds of looting were done, the two tribes went on their merry way, marching for a few hours and of course, forming impromptu alliances that more likely than not are going to break sooner than Alicia can assume you’re scheming against her.  Ugh, she is the worst.  As of now though, Alicia’s 5-person female alliance (of some other chicks, including Sabrina , the token black woman this season and one who I immediately liked – so that probably means she’s gone in an episode or two) is still together because there was no one “voted out” this first episode.  More on that later.

At camp, both tribes realized what the “One World” of this season’s Survivor actually meant.  Both tribes are living on the same beach.  No rules other than that, and it was up to the tribes then on how to co-exist.  I love this new twist, so much more than the awful “Medallion of Power” or “Redemption Island”.  It’s interesting as it immediately removes that easy bond of tribal unity as you now see the other tribe all the time, and if you feel like your place in your tribe is at risk, well, go and talk to the other one.  In this episode, we got to see all the expected bartering and promises between the men and the women.  They ended up creating different camps with separate resources, but I imagine that is going to end.  It just seems that after the “honeymoon” period is over, certain men are going to be more than happy to have females in the alliance, just as I can see that there will be women who want nothing more than to get away from the cray-cray at female beach.  We’ll see, but in the case of gay Colton (who is beyond stereotypical gay – they must have promised him a bonus if he amped up the queen factor), this has already seemed to proven true, as he immediately wanted to ally with the ladies. Sabrina even found the Hidden Immunity Idol and gave it to him, as he was the only one that managed to be somewhat friendly towards them.  Without wanting the ladies to strip off their clothes or dance on a stripper pole.  ugh.   Colton promises to be fun, and from what Jeff Probst has said, quite a villain.  I’m guessing he sells Sabrina out the next episode.  Queenie Queen – keep that shit to a minimum if you want to win Survivor! 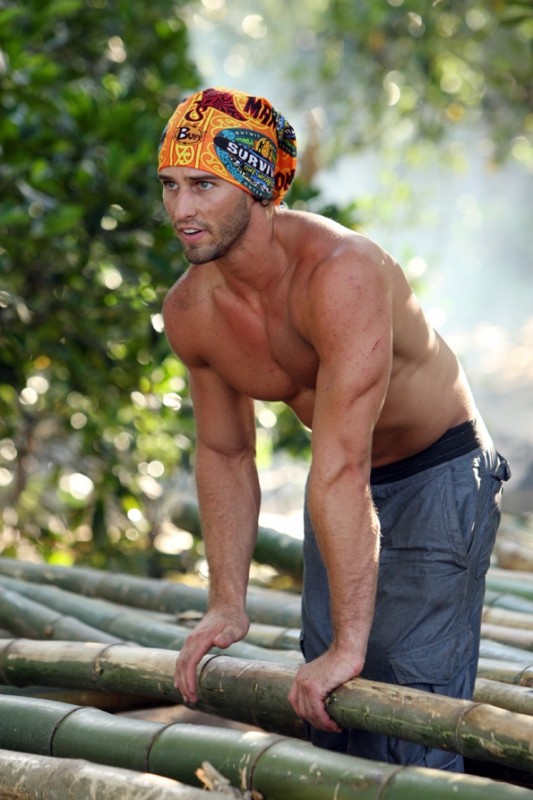 After the histrionics and drama at camp, it was time for the tribes to compete at the combined Reward & Immunity Challenge.  The first element of the three-part challenge was to jump into a cargo net from about 15-20 feet up.  Jeff Probst clearly instructed everyone to jump and land on your butt while holding your hands at your chest.  Did anyone listen?  I think maybe one.. two at most.  These idjits did everything but what Jeff said. Some jumped straight down, some landed on their face (oof…that was one HELL of a nasty lip on that chick after she faceplanted on the net – that’s a regrettable way to be introduced and ingrained into America’s memory), and some, well, some like Kourtney put their hands underneath them to break the fall.  Lady, that’s what the net is for.  She landed on her wrist and as we found out later, broke it.  After basically collapsing at the next station of the challenge, Probst stopped everything.  Kourtney was taken to the medical tent, Jeff asked if the men were chumps and wanted to continue the challenge although he had just given them the win by default, the men proved not to be stupid, the women tried to guilt them into going on, and unsurprisingly, the women ended up at Tribal Council.

Oh yeah, btw, that is Jay in the picture here.  Hachee Kachee.   Jeff would not be denied fireworks at TC so before revealing if Kourtney was going to be back, he dove right in.  He found a live one in Alicia, who is so sure that Christina, the Asian female who got her tribe fire by bartering for it with a decent price of weaving palm fronds, was selling the females out.  Christina isn’t in Alicia’s impromptu five-person alliance from the initial trek so I think Alicia is doing whatever she can to make sure her alliance is solid.  What I think she actually managed to accomplish was pointing out that she’s extremely unstable.  Alicia needs to chill out or else I see her getting targeted next.  I LOVED that Christina would not back down when Alicia started trying to overtalk her.  She even yelled at Alicia to “shut up!”  LOVED IT.

It will be interesting to see where we go from here and how long things stay as “One World.”  I highly suspect that there will be a tribe switch-up (which we haven’t seen in quite a few seasons) just to keep things interesting, now that the “merge” won’t be nearly as interesting since there’s no getting-to-know-you nonsense.  I have no pick to win it all at this point.  I do have a few picks (or pics) for those who I wish to see lose all their clothing except for underwear.  I think you know who those are.  That is all.