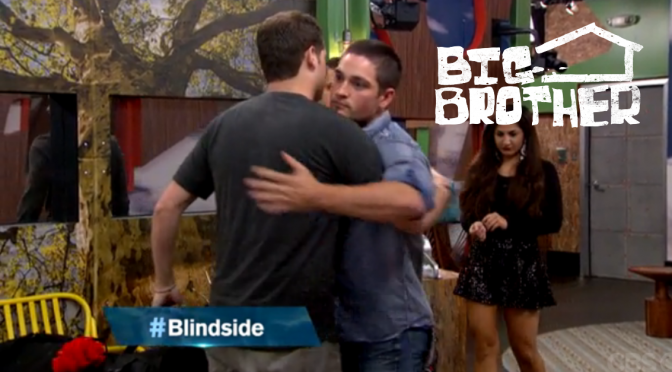 For quite a while, it’s been apparent that Caleb was never going to make it to the end, especially if Derrick had anything to say about it. Â I don’t think there’s a real fear of losing against Caleb at the end, but you just don’t want such a physical weapon as a wildcard element around. Â Caleb could easily blunder his way to winning the final HoH and depending on who talks to him last, could evict the wrong person. Caleb’s best attribute this season was his dependability to do what you asked him to do; being a challenge beast certainly made him even that much more attractive as a usable partner. Â Yet he was never in the Detonators and none of his Final 2 deals were real. Â Of course he didn’t know that! Â Final 4 was a pretty great finish, all things considered. 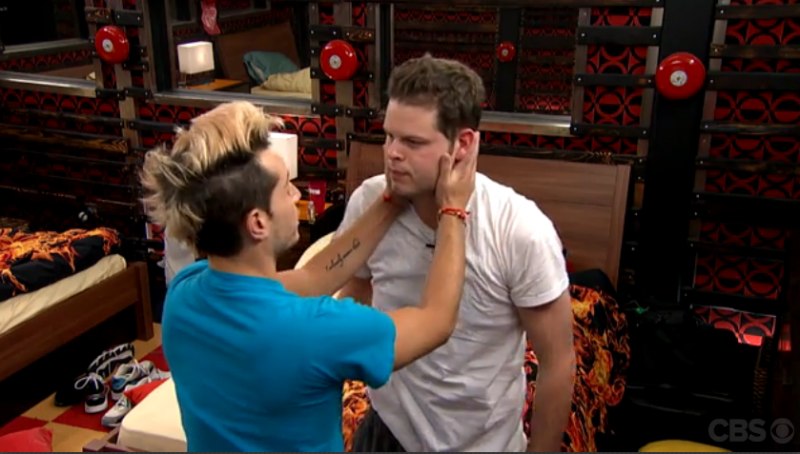 There was a very interesting set of scenes shown from shortly before Frankie’s eviction on Tuesday night pertaining to when he found out that he had no chance of staying in the house. Â  He got the news from Derrick, who admitted he just couldn’t lie to Frankie’s face especially due to their Team America alliance. Â There were tears and emotional hugs, but Frankie seemed to accept his fate. 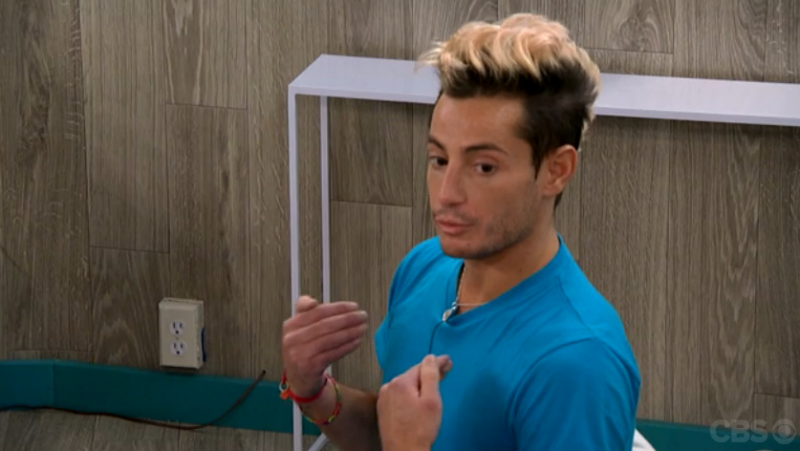 Yet! Â A fairly dramatic HoH Room chat session with the boys also revealed some info that may be key. Â Derrick tells the assembled group that Frankie knows his fate. Â Frankie seems to give one last effort to stay in though, effectively telling Caleb, Cody and Derrick that if he is evicted tonight, they’re creating the most dangerous juror of the season. Â He claims that with his communication and persuasion skills, he’s basically going to decide who winsÂ Big Brother 16. Â The reactions from Cody and Caleb are easy to predict: 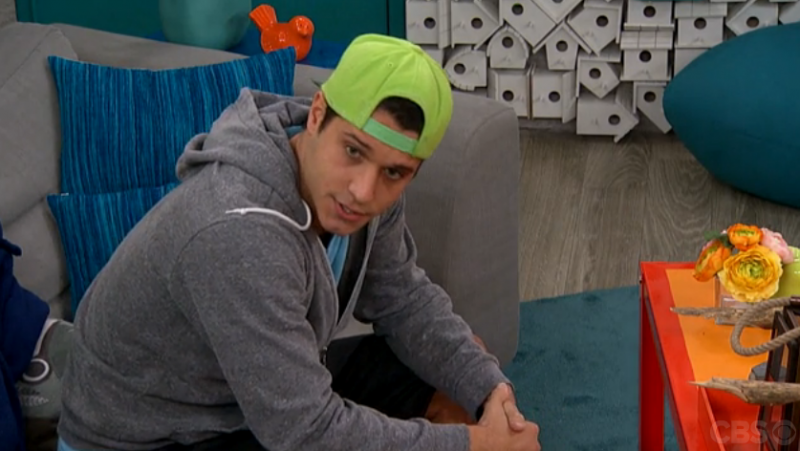 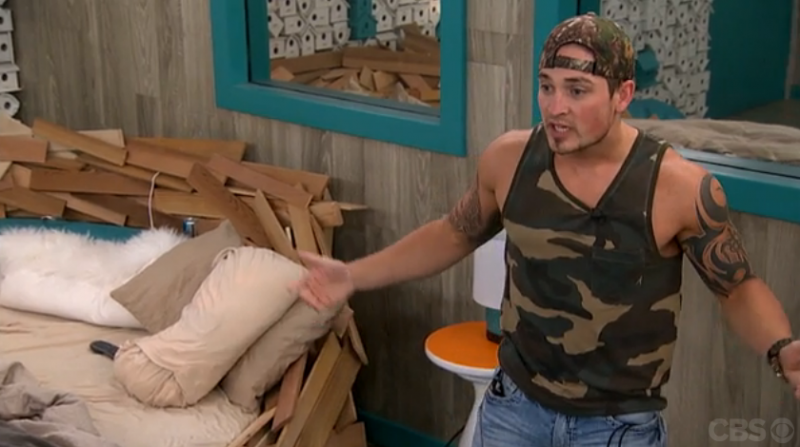 Neither buy it. Â Cody calls bullshit and tells Frankie he’s not Jesus. Â Caleb is more offended at Frankie’s arrogance and refuses to believe that the jury would ever have awarded Frankie the win over Caleb if they had been side-by-side. Â Frankie kinda insults Caleb with the revelation that the game has been played all around him and he’s been manipulated by everyone this whole summer. Â You can tell that hurts Caleb’s feelings but we the viewers know it’s the truth. Â This exchange certainly informs what Caleb says to Julie later on.

Sure, we got to see the clip package about Caleb’s home life, and it was kind of nice to see how normal his parents are, but let’s be real: Â seeing Caleb’s modeling pics wasÂ for sure the highlight. Â Holy hell – that pic of him with just the football? Â Let’s review: 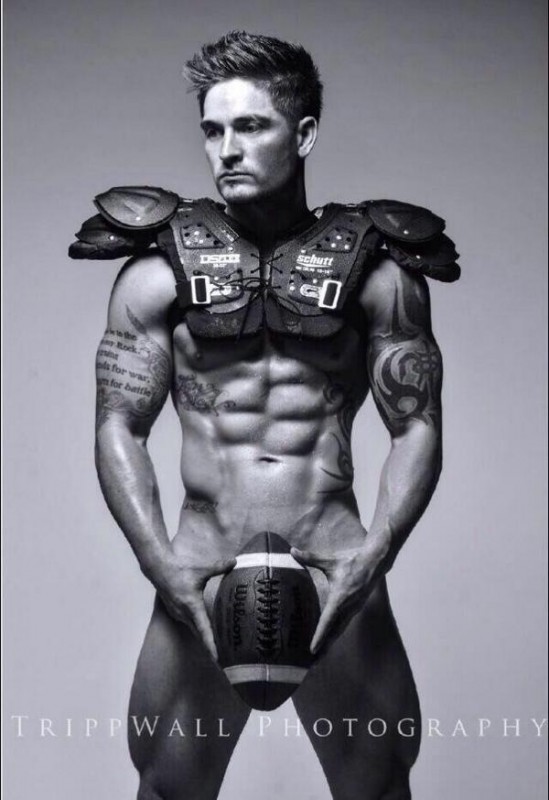 Now, Caleb really looks sad here. Â He shouldn’t. Â He’s smokin’ hot, but for some reason they made him look older and depressed. Â Why? Â Flash that smile and this would be an insanely hot picture. Â So while I was looking for this picture online, I stumbled upon bustle.com who had the picture along with a link to, surprise surprise, Cody’s modeling pictures! Â I guess I shouldn’t have been surprised he was a model too, but…umm…the gear he’s modeling? Â It’s ridiculous. Â See for yourself…. 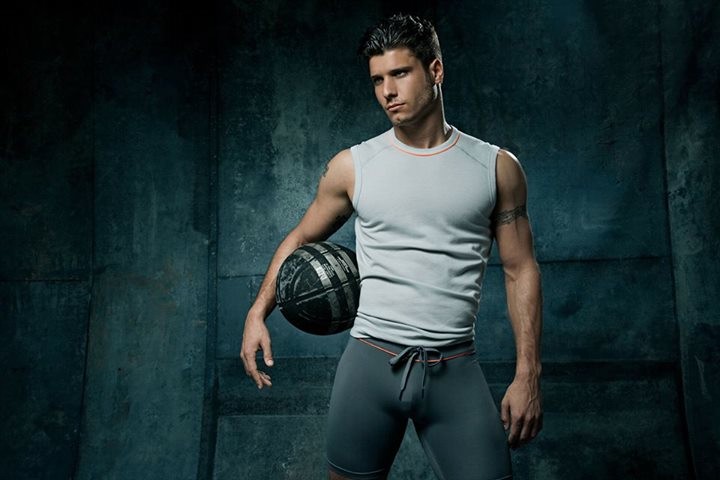 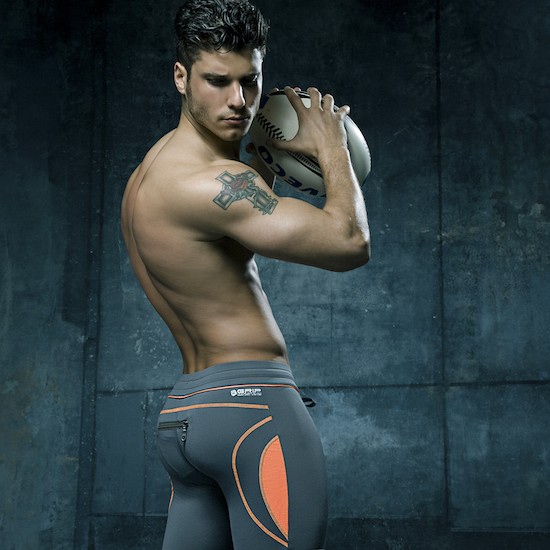 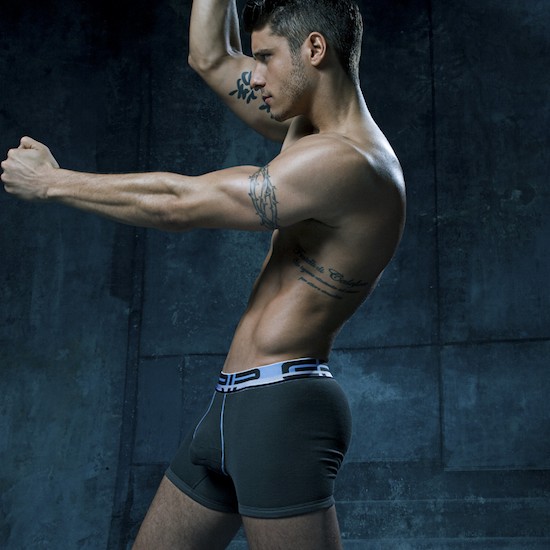 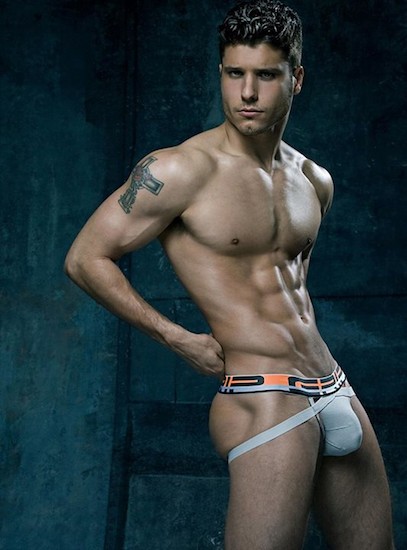 I won’t try to be asÂ humorousÂ as bustle.com was – read their commentary as it really is funny. Â But yeah, I think Cody may have just won the Cody v Caleb contest, at least in terms of who models the most impressively. Â Because DAMN. Â Okay, the tangent is over for now. Â Most impressive, gentlemen.

WHAT was I writing about? 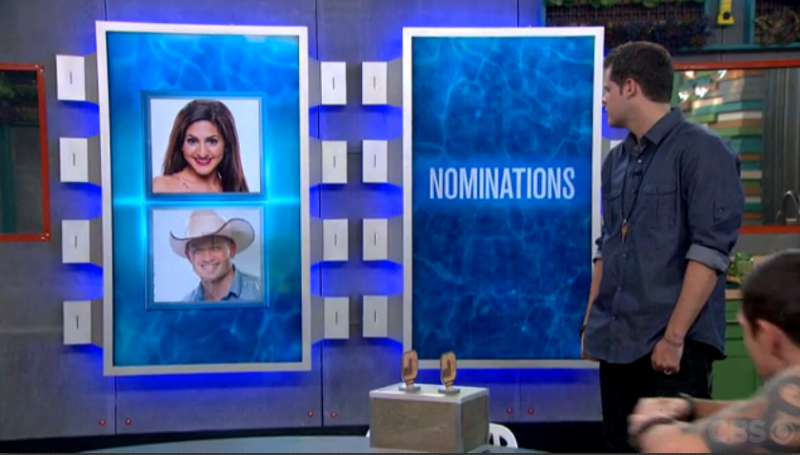 That last section definitely left my mind wandering…. Â Anyway, a nomination ceremony had to occur. Â Derrick made sure that everyone felt comfortable going up, further cementing his position as this season’s superstar. Â So up went Victoria and Caleb. Â Unbeknownst to Caleb, he’s not a pawn and is the target.

The Veto Caleb Needed to Win 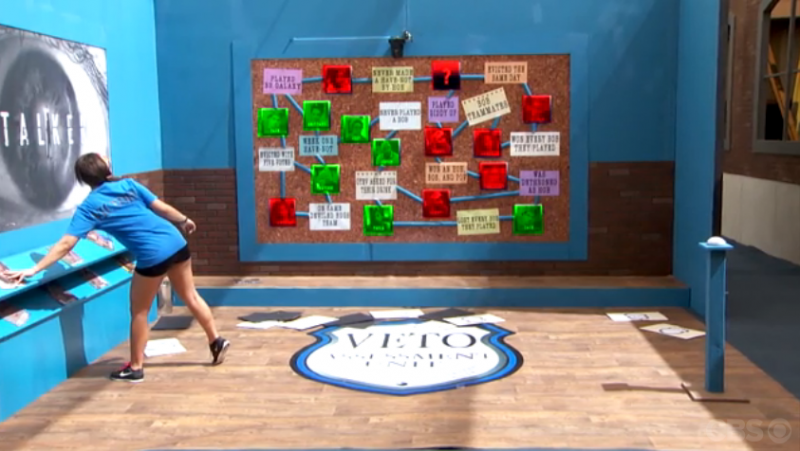 This Veto competition is one we have seen before and always around the Final 4, testing the houseguests on all sorts of trivia and requiring them to identify the houseguests that satisfy various sets of trivia. Â As you can see, Victoria was doing great! Â Caleb freely admitted to us that he was never going to finish, while Derrick threw it as he has no desire to get any blood on his hands. Â He recognizes that the Veto Winner will be the person who casts the vote to evict, and why have that kind of attention? 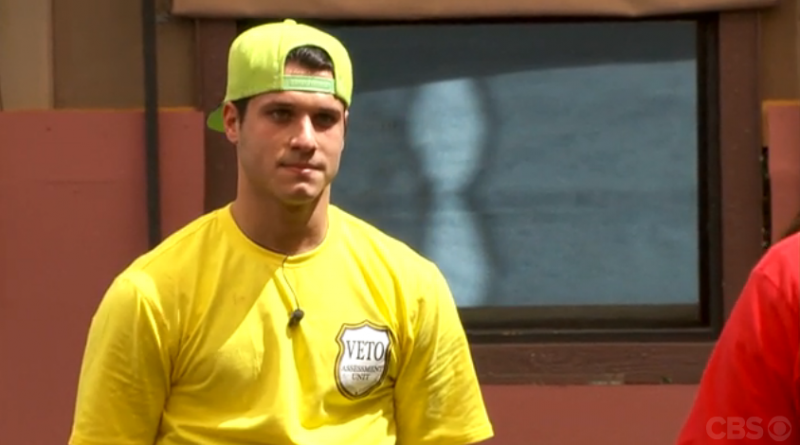 So Cody takes the win, almost by default. Â I admit I was maybe kind of hoping Caleb could win; Â I would have been floored if Victoria had managed a win, as winning this one would have been all kinds of crazy. Â Although thinking about it, she would have done what Derrick wanted, which was to get rid of Caleb. Â So yeah, Caleb HAD to win this Veto – he would have probably sent Victoria home to adhere to the Guys’ Final 3 Deal, which just shows how idealistic/naive he is. Â Ah well, it shows he’s just not really cut out to play this game the way it has to be played if you intend to win. Â That’s actually a compliment! Â (Note: Â I still have the utmost respect for Derrick’s gameplay – his approach has been decidedly pleasant but ultimately ruthless) 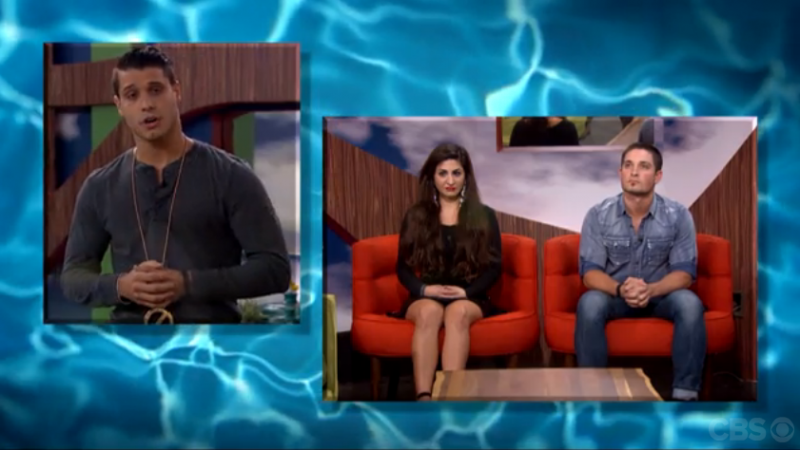 I’ll give Cody props in that when evicting Caleb, he made sure that it was a mutual decision by both him and Derrick, acting together. Â I’ve read since that Derrick was cool with Cody doing this ahead of time, but it would have been thrilling if Cody had done this in a surprise manner to everyone. Â But it’s made clear to Caleb this is a unified vote which you can tell hurts Caleb and surprises Victoria. Â 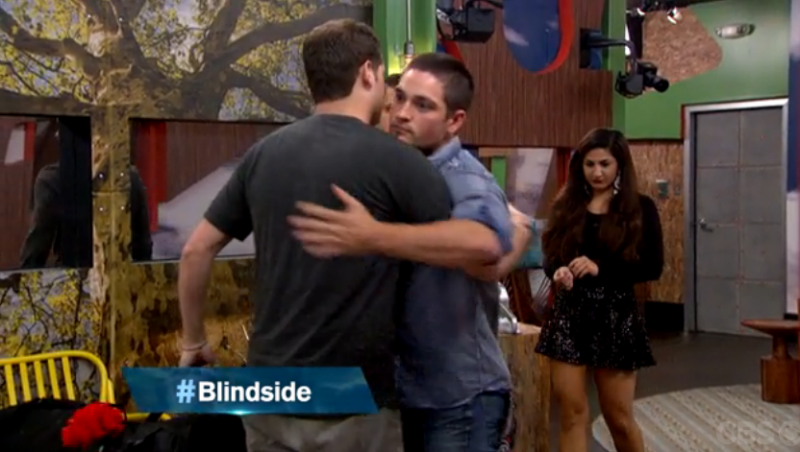 I’m intrigued that Derrick allowed Cody to say this as he certainly was telling us earlier that he didn’t want to win Veto to make sure the Veto Holder faced the most anger. 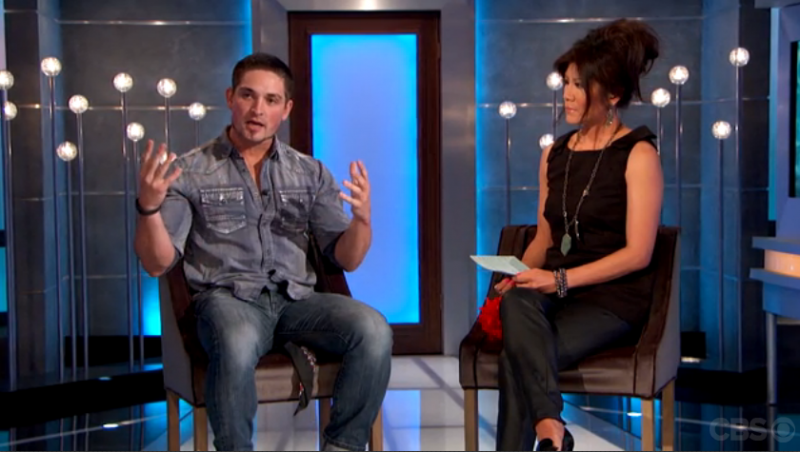 Outside with Julie, Caleb looks visibly disappointed. Â He admits that he thought Derrick had his back and that the existence of the Hitmen disappoints him. Â He knows these kinds of game moves have to happen at this point though. Â Regarding Frankie, Caleb has absolutely no regrets about getting rid of him and that Frankie’s true colors were revealed that last day. Â Caleb really is all about that last impression, isn’t he? Â He wishes that he hadn’t shown Frankie any respect over the summer… C’mon, Caleb, you know you don’t mean that. Â I’m guessing as soon as we get to the Jury House, we’ll see he’s all good with Frankie again. Â He’s got to realize that Frankie was most definitely his best bet for a Final 2 but he was played HARD by Derrick. Â I’m sure he will one day. 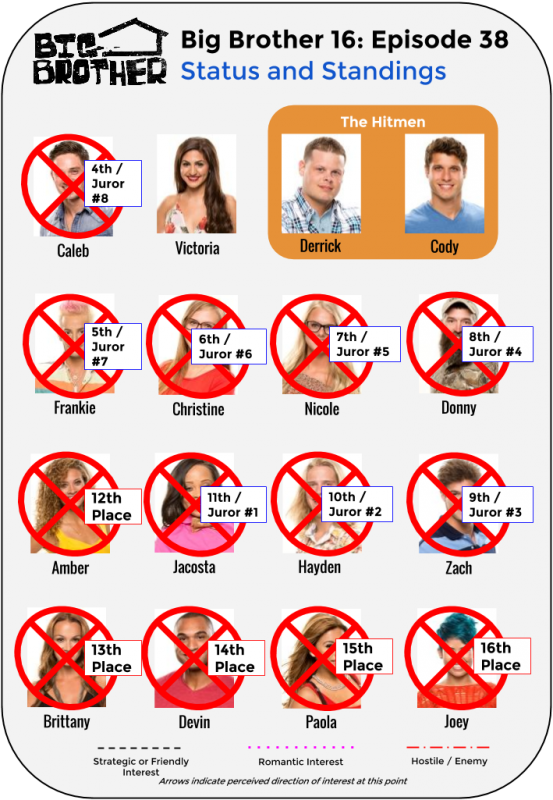 There’s a special episode tonight, which is the first part of the final HoH competition. Â Everyone gets to compete, and I’m sure Derrick would love to make sure he wins Part 1 in order to automatically advance to Part 3, but who knows what’s going to happen? Â Maybe Victoria has been playing possum and will wipe the floor clean with these guys. Â Not that it matters – everyone wants to take her to the end. Â She can just sit there and drool and she’ll still go to the end. Â Congrats, Victoria, on playing the Perfect Goat Game. Â Seriously, that’s impressive.