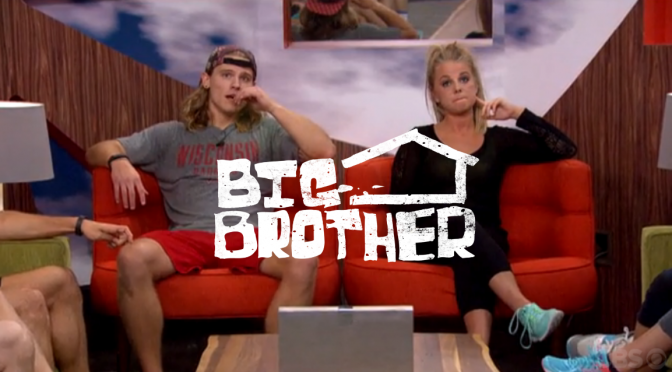 This crazy-ass and ultimately depressing (to me) episode was due mainly and almost completely to the actions of The Hitmen, Derrick and Cody.  If we’re being honest, it’s truly Derrick doing all the heavy-lifting here.  BUT, of course the way some will see it, they were the architects of their own destiny.  I was originally planning to title this article, Failing Upwards, referring to Caleb and Christine yet again, but decided to give credit where it’s due. 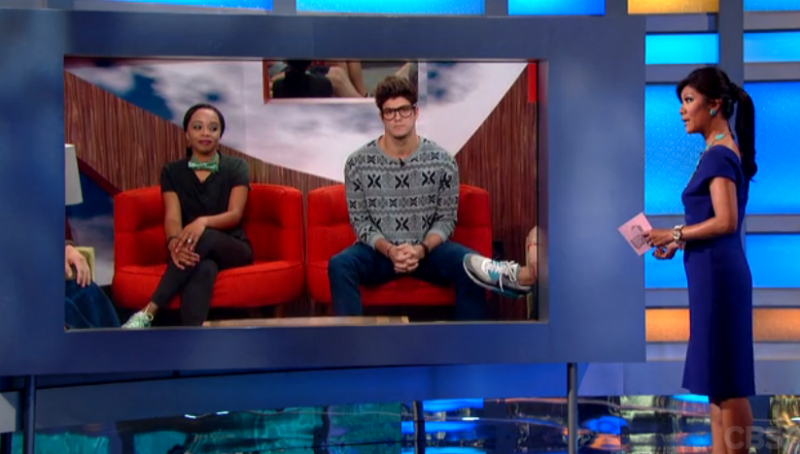 After Episode 19, it seemed that the wheels were in motion to get Zach evicted.  It would have been so cathartic for me to have seen that happen.  Alas, fucking Caleb, of all people, illuminates a piece of strategy for Derrick that causes him to completely change course. 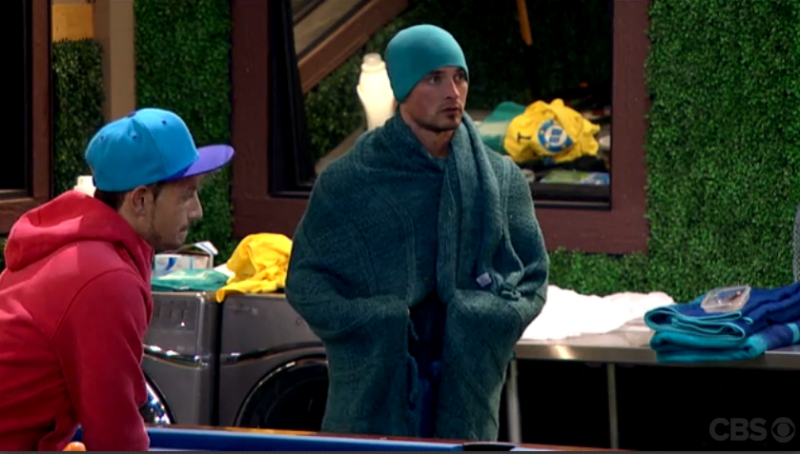 Caleb points out that it’s a numbers game and even if Zach is an untrustworthy element in the house, he’s still a # in your favor.  This insight leads Derrick to reaffirming his Detonators alliance and utterly annihilating “The Rationale” alliance as he and Cody both spread the information about Nicole’s ultimate plans were, including backdooring Frankie and possibly targeting Christine.  Amusingly, 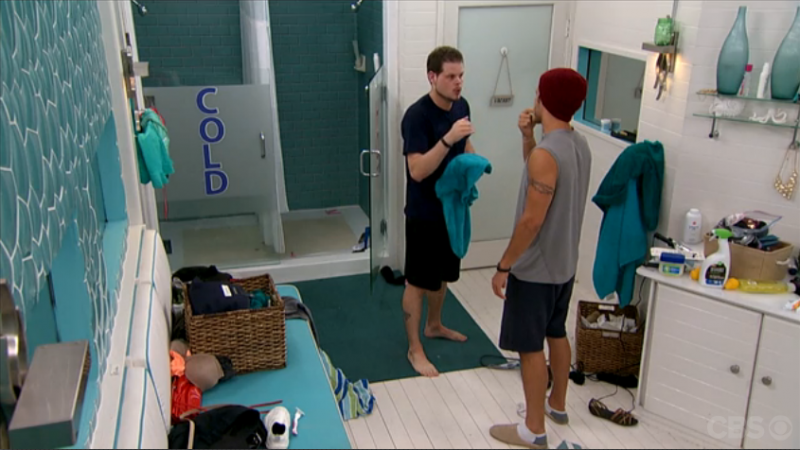 In hindsight, I definitely felt more in Nicole and Hayden’s corner as they were just nice people.  Sweet, even.  Derrick and Cody are great too, so to see them all come together was an alliance I could definitely support.  But Derrick is playing this game hard, and when he ran the #s and figured keeping Zach and the Detonators intact made more sense, it was hard to argue the point, logically.  Emotionally though?   UGH!  Zach is the fucking worst.  And to see how brutal that episode was watching Nicole do her best to not fucking flip out after realizing how fucked she was?  I hated this episode! 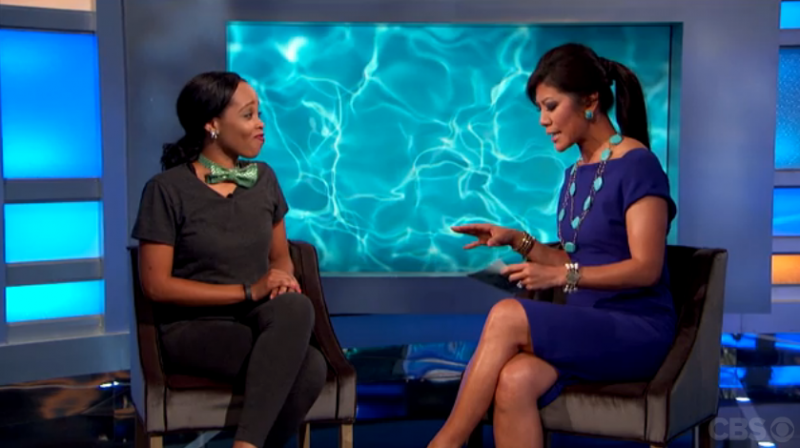 So Jacosta gets voted out, 6-2, with Hayden and Donny voting against Zach, completely unaware of how things had changed.  It also ended up being used against them later this episode….. 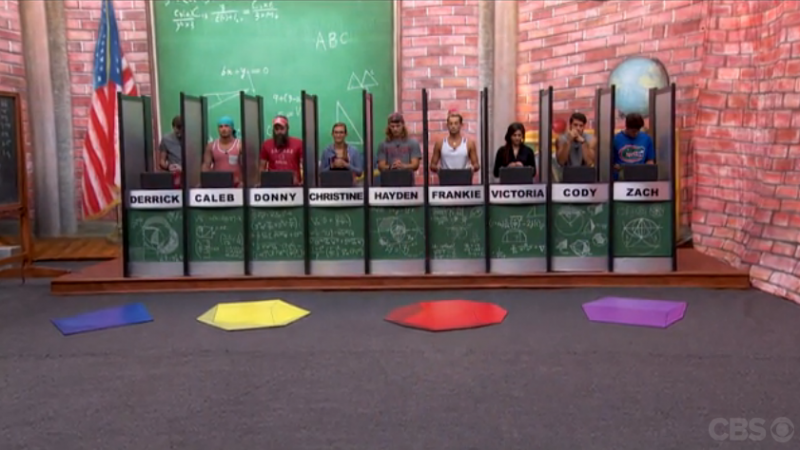 Our first stop was the Head of Household competition.  Only one HoH was going to be crowned this time though – and in the end it was a showdown between my 2 favorite stumblers-through-destiny, Caleb and Christine.  Caleb ended up winning, effectively sealing the fate of those on the wrong side of the vote: Hayden, Nicole and Donny. 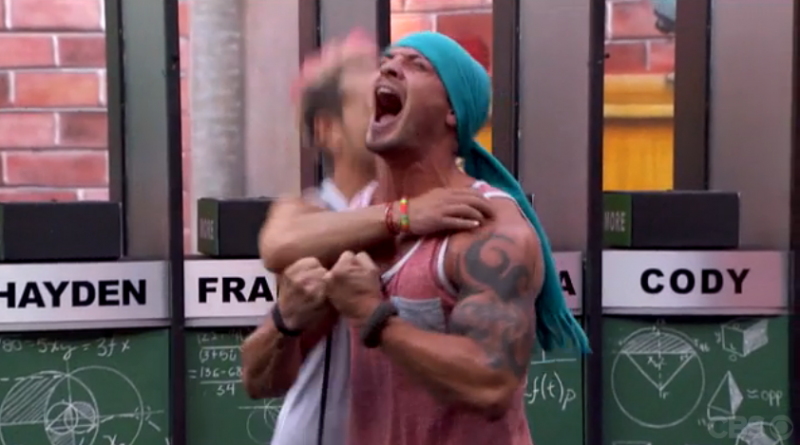 I think I’m over my infatuation with Caleb for now.  He’s getting played so masterfully by the others in the Detonators it is just sad to watch. 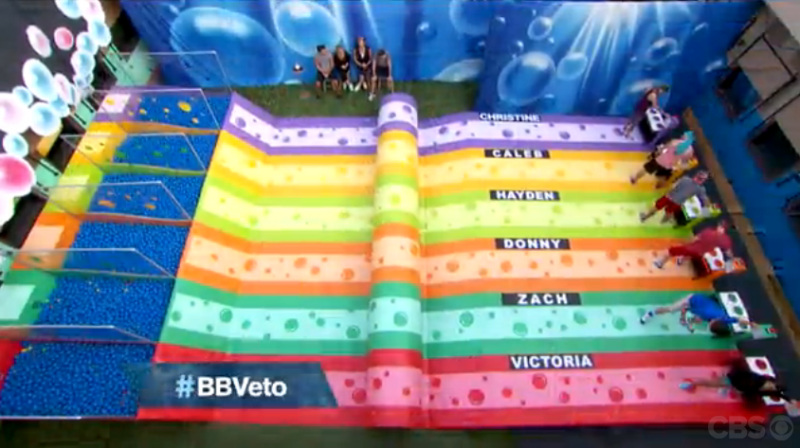 Caleb nominates Hayden and Donny, because why not?  Apparently there were lines drawn based on what people told him….smh.  In the Veto, the players had to run to a ball pit and find 3 rubber duckies and bring them back one at a time, after which you have to run back and grab the Veto and then ring the buzzer.  It’s a fairly hectic challenge and while Zach got an early lead, 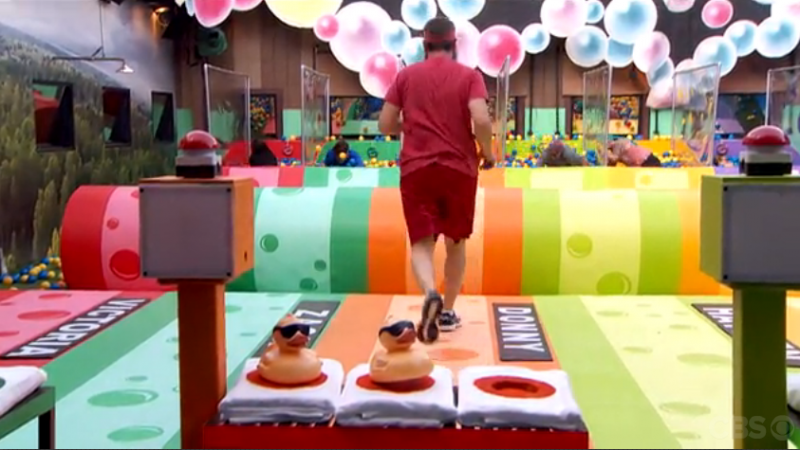 Donny surprises everyone and fucking wins the thing.  GOOOO DONNY!!!!  You’re definitely this season’s underdog who has a snowball’s chance in hell of making it much farther in the game, but damn, it’ll be entertaining to watch as he continues to confound those trying to get him out. 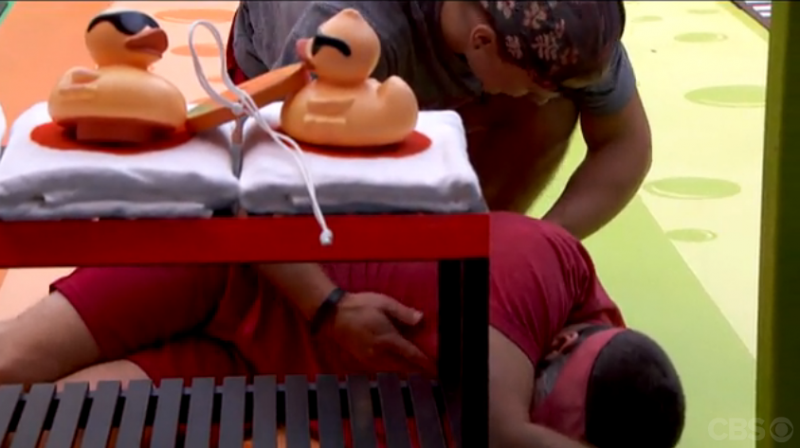 Unfortunately, winning the Veto looks like it fucking killed Donny, as he literally had to be carried back into the living room after it was over.  The poor boy gave it ALL out there to win, but it wasn’t pretty.  Of course this win saves Donny but absolutely means the end of Hayden and Nicole’s relationship, as of course, Caleb puts Nicole up as a replacement nominee. 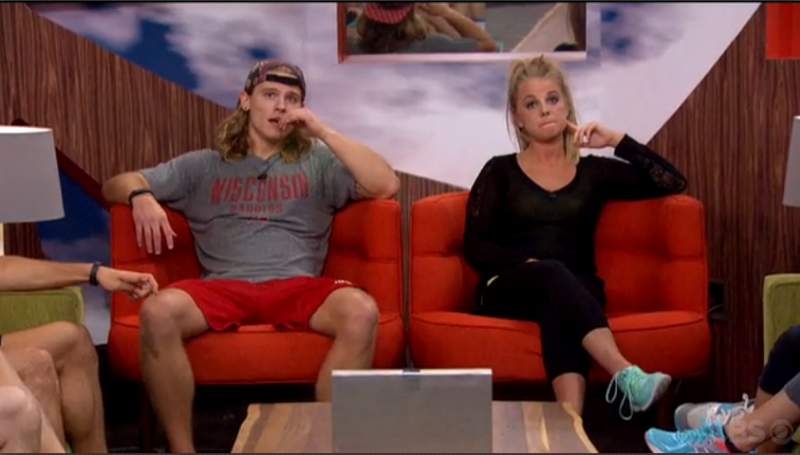 It’s clear from their faces here and in the show that they knew they were done.  Hayden immediately knew he had been played when Jacosta was voted out.  He was disappointed and resigned.  Nicole, on the other hand, was barely containing her emotions.  You could see the entire time she was on the verge of tears or openly crying.  It was a mix of rage, anger, confusion, sadness and betrayal and hard for me to watch.  As much as she’d like to accuse Christine of being a Judas, which is true, it doesn’t matter.  Christine is in the alliance that has the power and you openly declared war on it.  Unfortunately, the fellow soldiers you trusted were not to be trusted by a long shot. 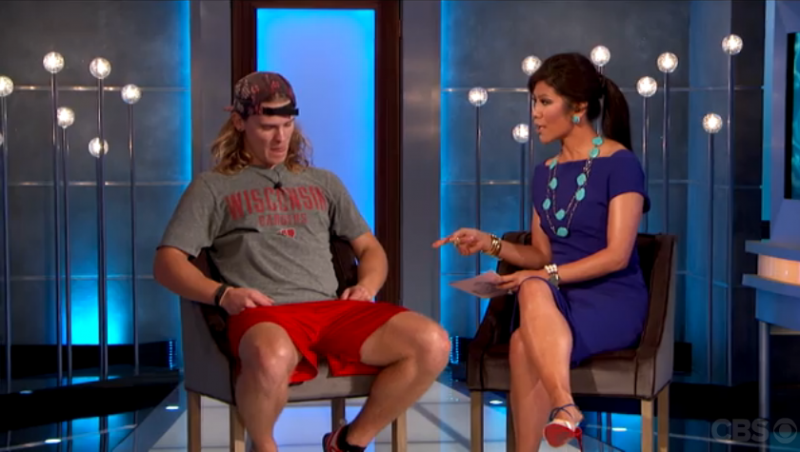 So poor Hayden gets evicted and sent to the jury with Jacosta….BUT FIRST!

Julie told us and the houseguests this episode that just because you’re evicted from the game and headed to jury, it doesn’t mean you’re out of the game for good.  So it seems we’re having a reprise of the game element from last year in which Judd ended up being able to come back into the house.  Probably after there’s 4 jury members, we’ll get to have that competition to come back in.  I’d imagine, if The Detonators continue running things, that it would be a competition between Jacosta, Hayden, Nicole and Victoria to come back.  I’d love to be surprised though with a different name there in the mix. 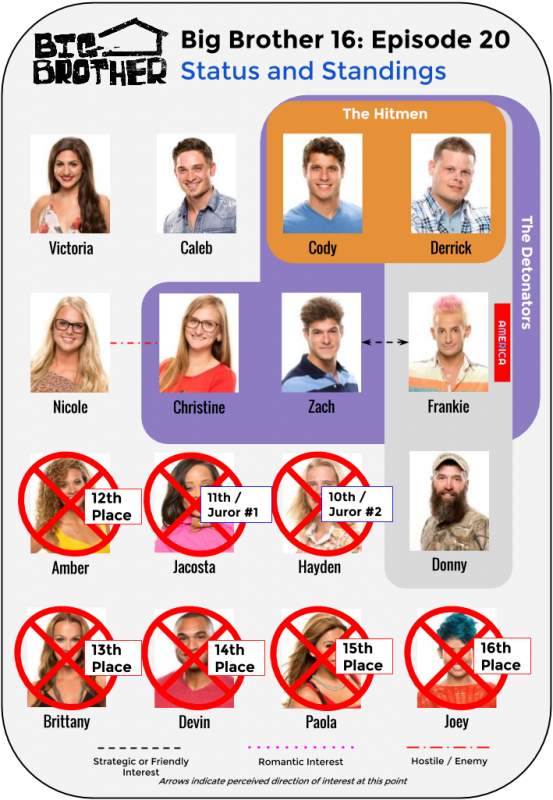 So that brutal episode is over.  I’m anticipating a rough week for Nicole at Zach’s hands; 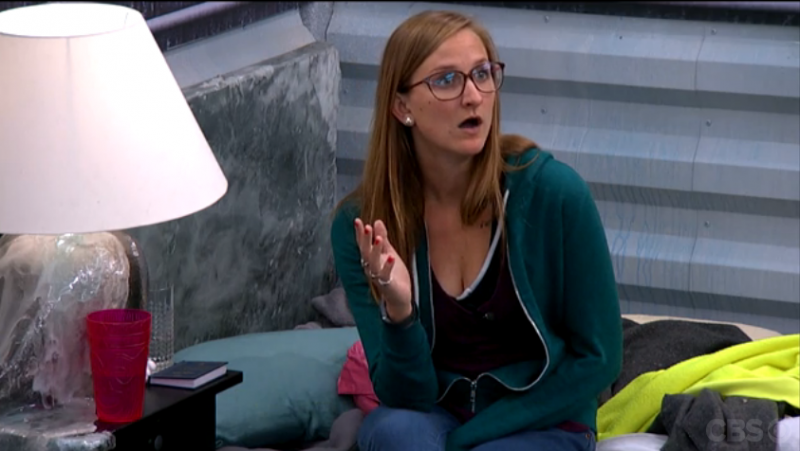 Christine probably won’t give Nicole much of a break either.  For Nicole’s sake, I hope she can just either get out as soon as possible, OR EVEN BETTER,  get focused on some payback. She is for sure the target if she can’t secure victory in the next HoH, as right now, it’s just her against the house.  I’d love to for Nicole to get some satisfaction but let’s be honest, I’m sure the producers won’t let that happen.  I wouldn’t be surprised if Derrick was given a nudge to keep Zach in for the Zankie fans out there and there’s a whole lot of Zach-love in the BB fans out there.  WHY?

That other contest?  I’m done with it.  Caleb is a tool.  A hot tool, but his arrogance is just ugh.  And Cody doesn’t know a hoodie he won’t throw on to hide himself up.  So we’ll just call it now and give Caleb the title for 2014.  I’m totally allowed to objectify him some more if the situation warrants of course.