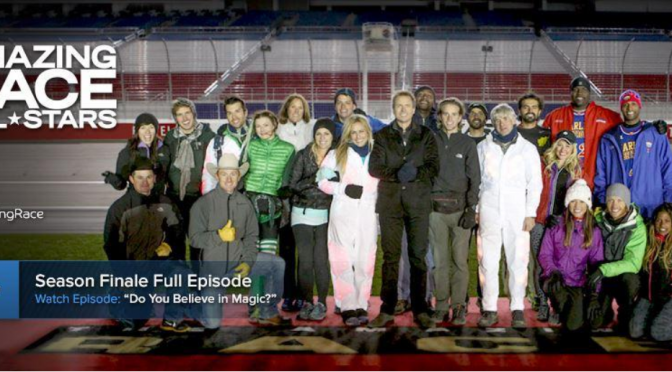 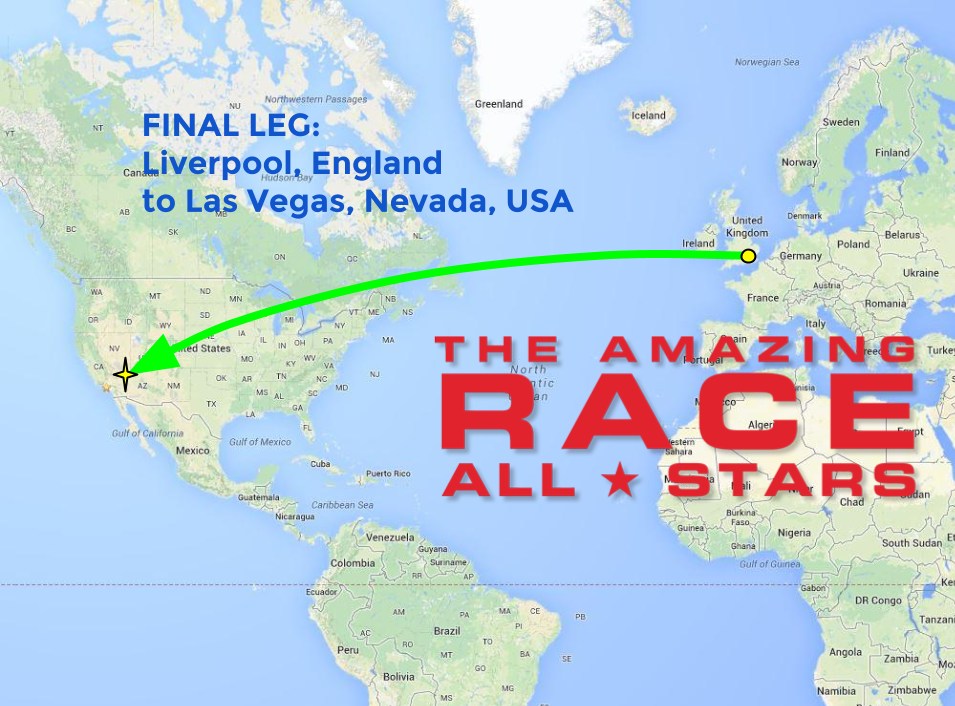 And so ends another good season of The Amazing Race!  The winning team was of course a very deserving one, and their victory was a culmination of what was a very well-run race by a strong team.  I speak of course about Dave & Connor, who had 5 leg victories under their belt before this Final Leg and were pretty much in the front of the pack for the entire season.  So congratulations to not only the oldest winner but also the first parent/child or father/son team to win! 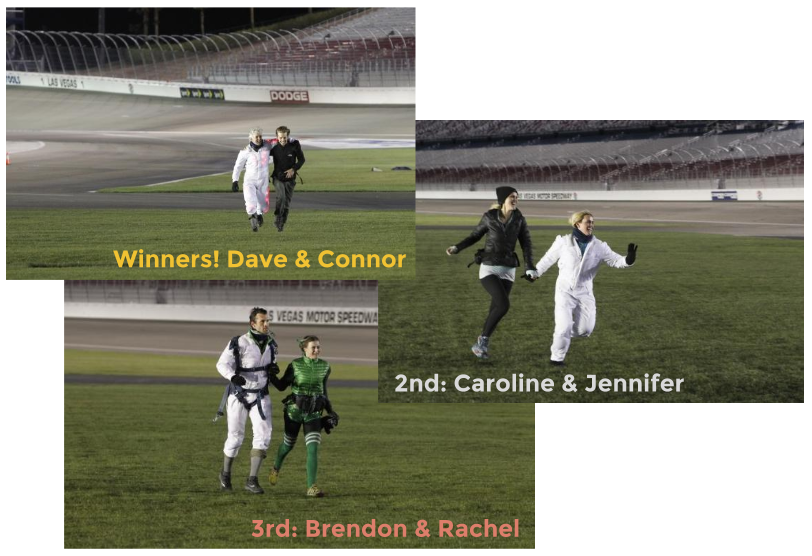 Can we talk about the fact that this last leg was almost too easy though?  As long as you didn’t get a crappy cab driver – sorry Brenchel – the tasks were fairly straightforward.  And that last Roadblock obviously didn’t prove to be more than a commercial for Vegas as it wasn’t difficult for the racers to see Aria’s huge Amazing Race-themed sign indicating the Finish Line’s location.  So as long as you were in the first helicopter, you were likely going to win.  Besides the relatively easy challenges though, the other issue I had with this finale was, “Where was the Memory Challenge???”  Where’s that challenge that tests the racers’ recollection of the race just run?  I think that’s a fair way to really keep the last leg a bit more challenging and adds some drama and tension.   With that being said, the right team won.  Let’s talk about the race in some more detail now! 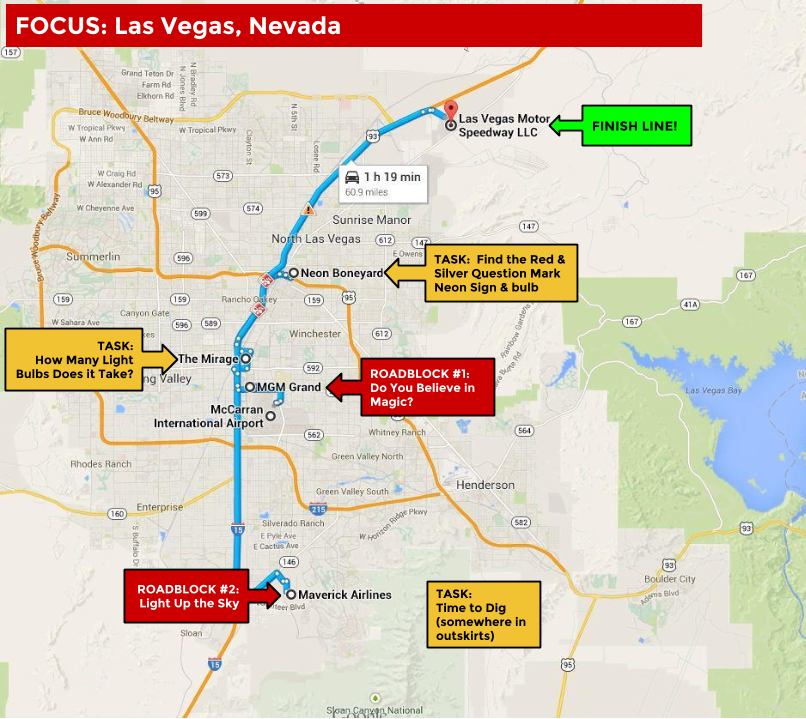 Las Vegas is my old stomping grounds as I lived there back in 2002-2005, although I don’t really think my locals knowledge would have been of much help here.  Sometimes the clues direct you to something that only someone who lives there would know, but that wasn’t a concern this time. 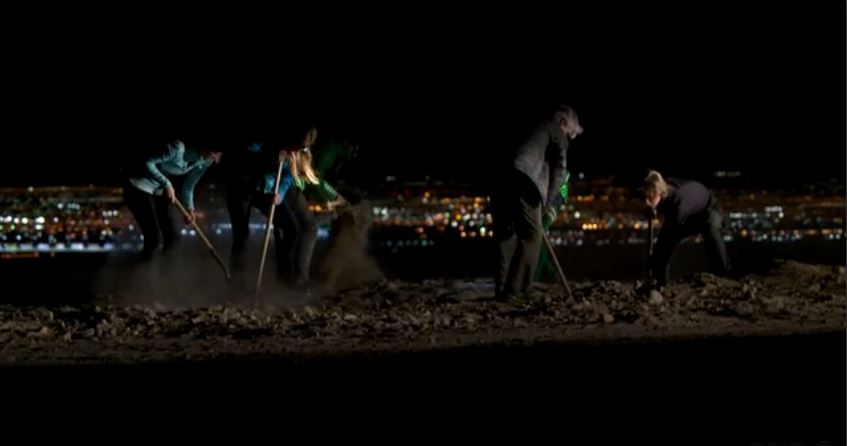 After their direct flight from England to Vegas, the racers were taken mob-style out to the desert outskirts of Vegas and told to dig.  I think the map I drew above probably should put the Dig Task a bit more north based on the lights of the city.  Anyway, here’s where some of Rachel’s tension at this being the last leg comes out as she and Brendon throw their dirt into Dave & Connor’s pit while getting into a shouting match with the Country Girls.  It also seemed there was a customs line jumping/pushing issue which sounds about right, as Brenchel admitted in last week’s bonus clips that they had cut the line then too.  Guessing the other teams weren’t having it this go-round.  Stay tuned for Bonus Clips recaps in a day or so.

Once teams dug up a wooden box, they were directed back to the MGM Grand where David Copperfield(!!!) was awaiting his delivery.  This was an awesome spectacle – and I’m shocked at how good he still looks.  He’s also so damn funny, and it reminded me of when he’d do those yearly network magic specials back in the 80s and 90s.  Such an entertainer! 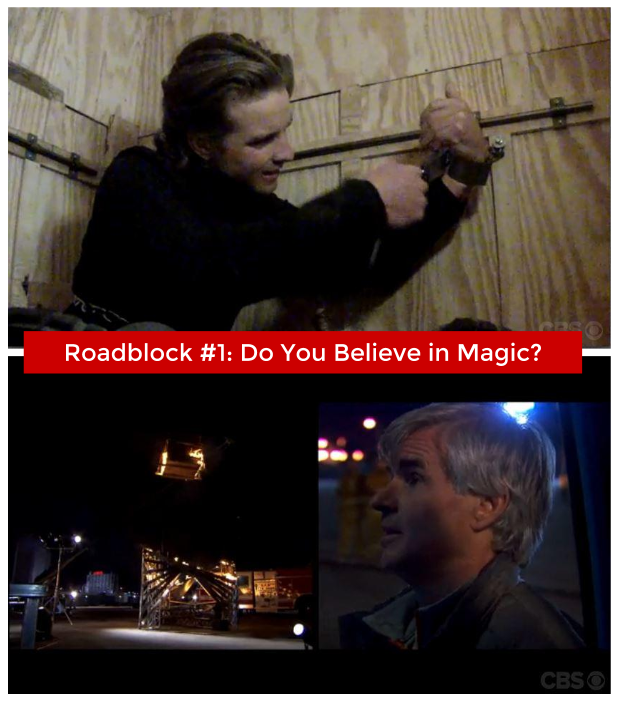 The misdirection here had to be that once the box the Roadblockee got in was sealed, they were taken out while the other teammate left to go watch the monitor in the van.  It was still a neat thing to watch as Dave’s face was a bit fearful at what had just happened.  Then the ‘prestige’ when the incinerated racer reappears as the fireman just makes you shake your head in happiness. 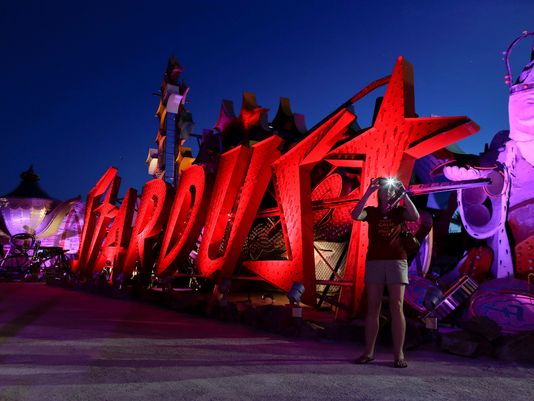 Once your magic trick was complete, David Copperfield gave a clue directing teams to the Neon Boneyard of Vegas.  What a fantastic-looking place!  May have to visit there when next I go back to Vegas.  On the way to this race marker, Brenchel discovered that their cab driver was the worst.   While the hunt for the light bulb on the red and silver question mark neon sign didn’t shake up the order at that time, what happened next did.  Brendon knew that their cab driver was the worst and tried his best to get Caroline & Jennifer’s cab driver to defect to him.  It was a good move, but the cabby was loyal to his Country Girls.  With no other options, Brenchel got back in their crappy cab and paid a penalty for it, as everyone got ahead of them.  Surprisingly, Caroline & Jennifer had a GREAT cab driver who got them to the next task first! 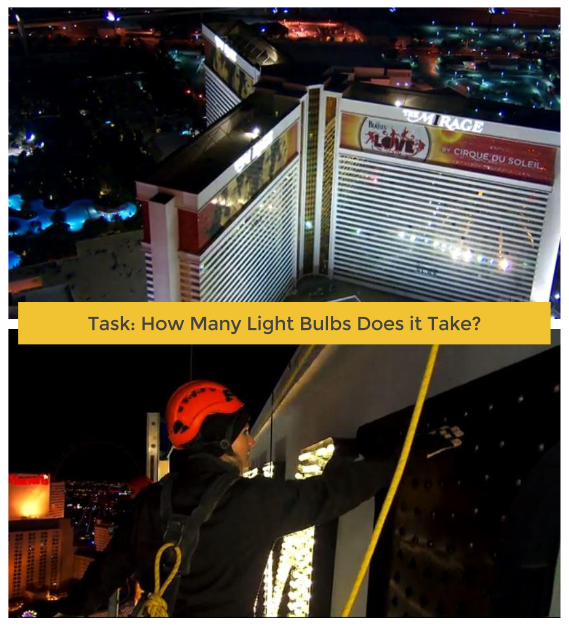 Here’s where it really started to seem that Caroline & Jennifer could actually win the race.  Alas, their hustle wasn’t enough as Dave & Connor were right behind them and overtook them in putting in the 241 bulbs needed to light up the “I” in the Mirage’s neon sign.  While these two teams were duking it out up top, Brendon & Rachel dug their hole a little deeper when Rachel, the Vegas local, got them lost in the Mirage hotel.  She blamed Brendon for not listening to her and insisting they look inside the hotel, but she should have known better.  This delay was the nail in the coffin for their Amazing Race lives.

Dave & Connor were first out of the Mirage task and to head towards Maverick Helicopters in Henderson, NV for the last Roadblock.  Caroline & Jennifer’s cabby once again proved amazing and he got them to the area first but Dave & Connor managed to overtake them at the very last moment, getting into the heliport area first.  This cinched their win, even though the editing tried to make it look like it was possibly close.  Obviously the folks on the ground didn’t know who it was, but for us, it was clear.  It was a spectacular end to the race though as the final Roadblockee jumped out of their helicopter at 10,000 feet after identifying the destination as the Las Vegas Motor Speedway north of Vegas. 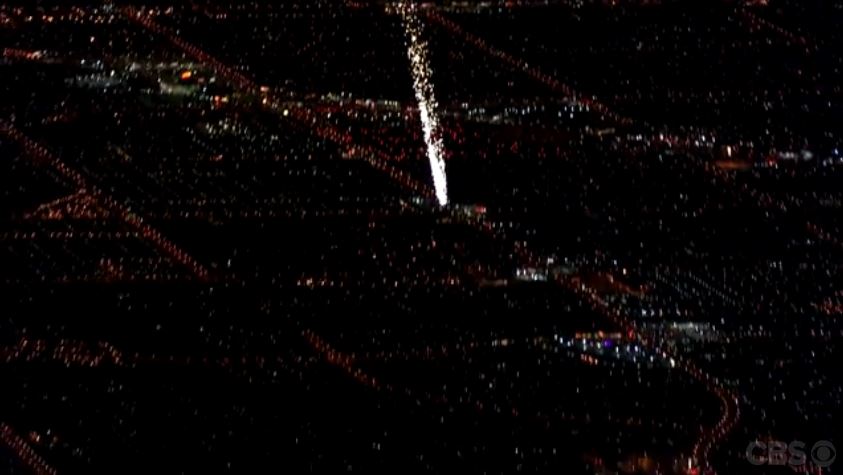 So Dave & Connor took the win and rightly so.  I think the other teams were worthy competitors and Caroline & Jennifer gave Dave & Connor a good run for their money at the very end.  BUT, in terms of overall worthiness, it has to be remembered that Caroline & Jennifer were still in this ONLY because of TWO non-elimination legs.  As for Brenchel, they were a very competitive team but like the Country Girls, they too were only here because they enjoyed the other non-elimination leg.  Dave & Connor never did that poorly.  So while of course, the non-elimination is part of the game and I appreciate that, I think the best team certainly won this season.

Till next time, those of you who read this recap!  And remember, it’ll be on Friday nights!

This Season’s and Final Leg’s Finish: 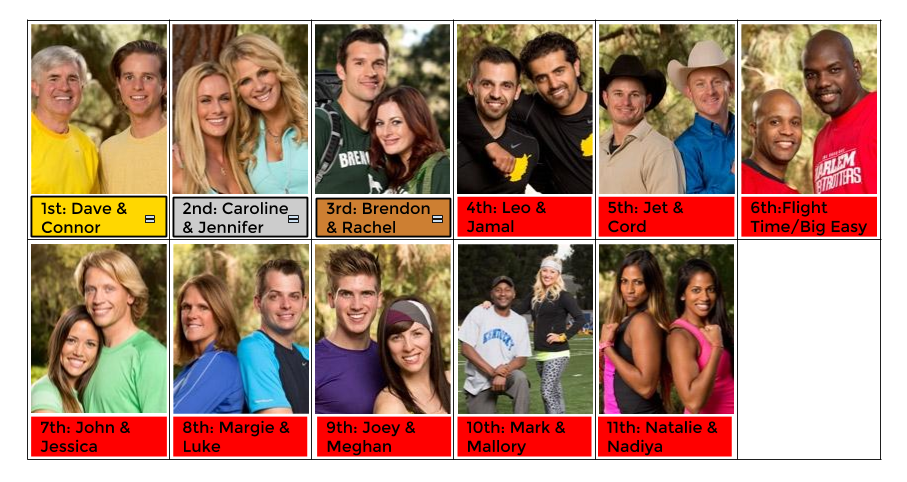 Overall Placement throughout Season 24 of the Amazing Race: 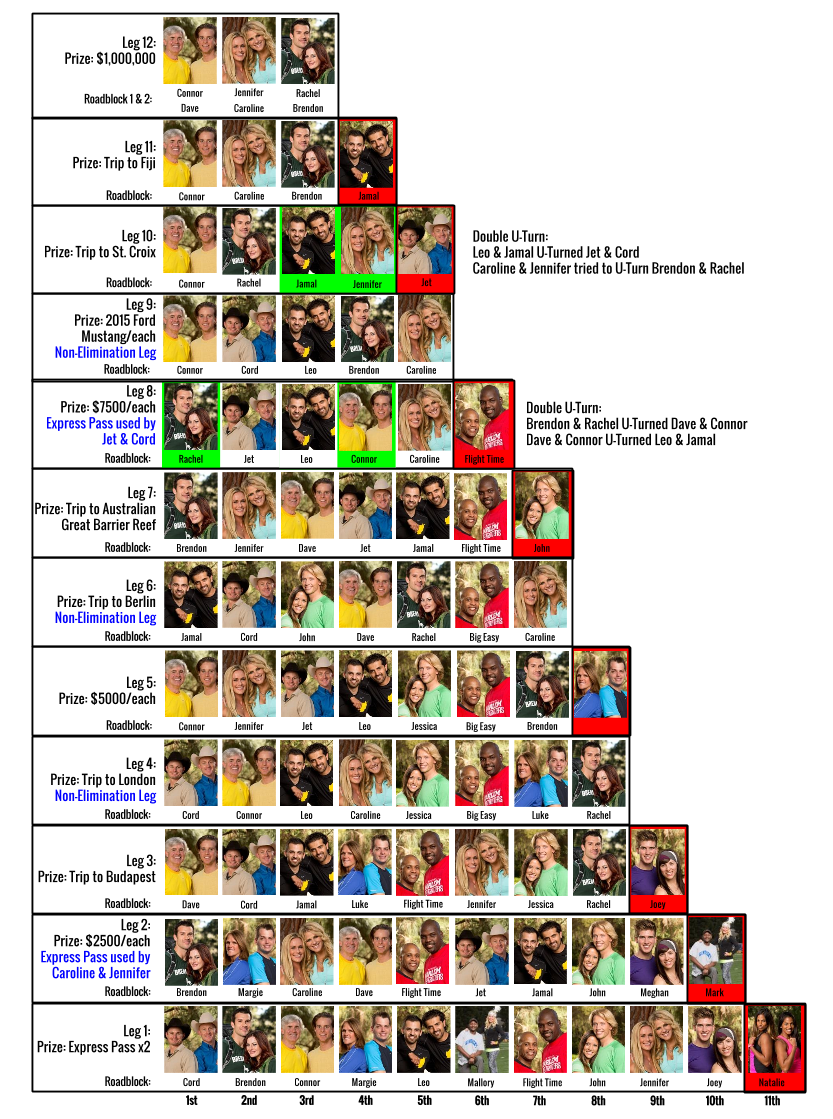