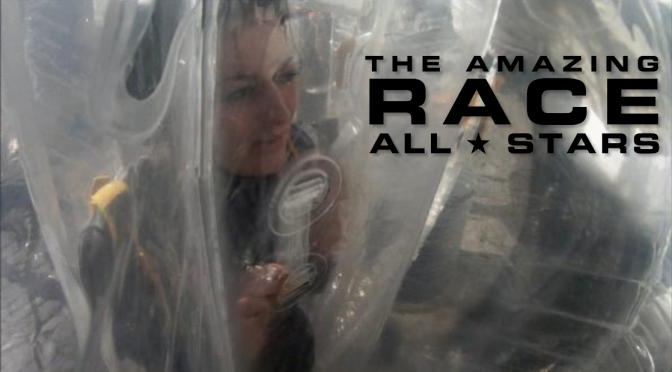 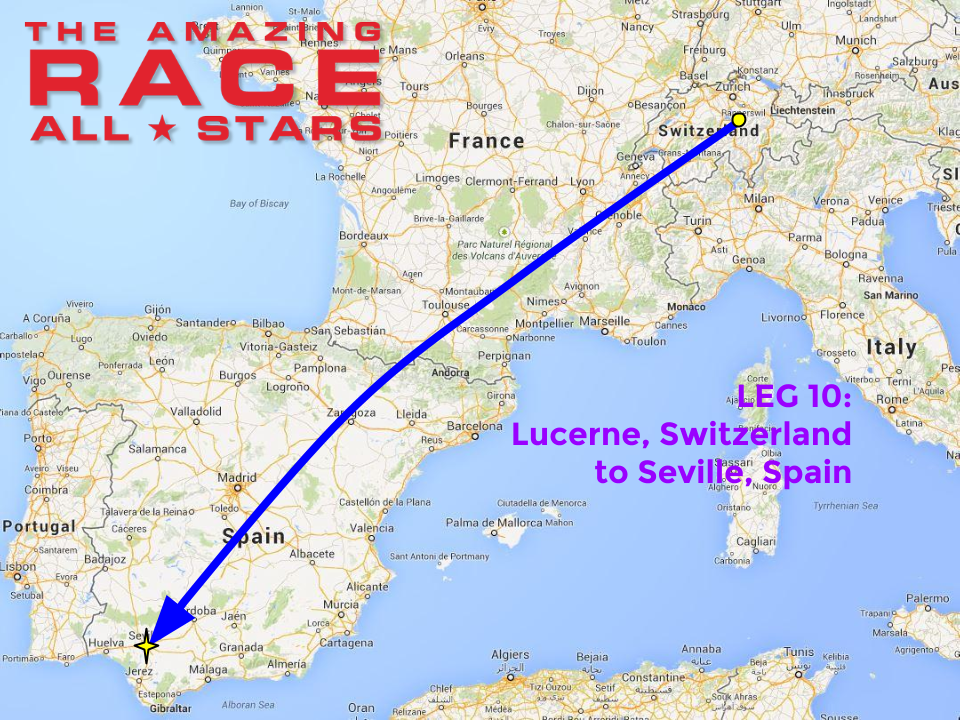 Well, you can’t say that the Amazing Race producers haven’t tried to hand the Cowboys a win, what with this being Jet & Cord’s THIRD try at the race.  Yet again, they are undone right near the end, but in this episode, it was clear they were the architects of their own destruction.  Whenever they needed to find their way and not make a mistake, they’d make that mistake.  It wasn’t like the other teams also made the same mistakes either – the Cowboys seemed to be getting sloppy especially by this point in the race.  So here’s a picture of them both looking pretty damn cute in their flamenco outfits – a good start if they’re looking to take on being Spanish Chippendales or Spanish Thunder from Down Under (I know, the analogy really doesn’t work there): 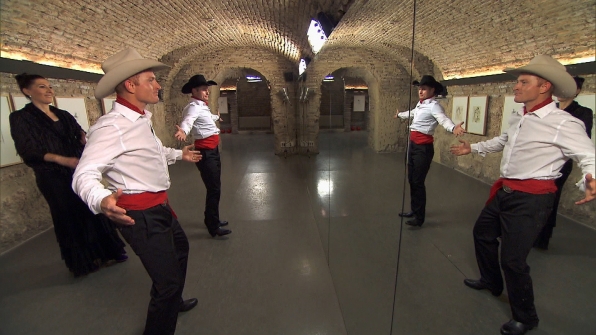 Here are some places where they stumbled:

This was a lot of sloppy racing.   A lot.  I would have loved it if they could have pulled it out, as they race good and race hard and truly do manage to stay drama free, but yeah, this was a well-earned loss. 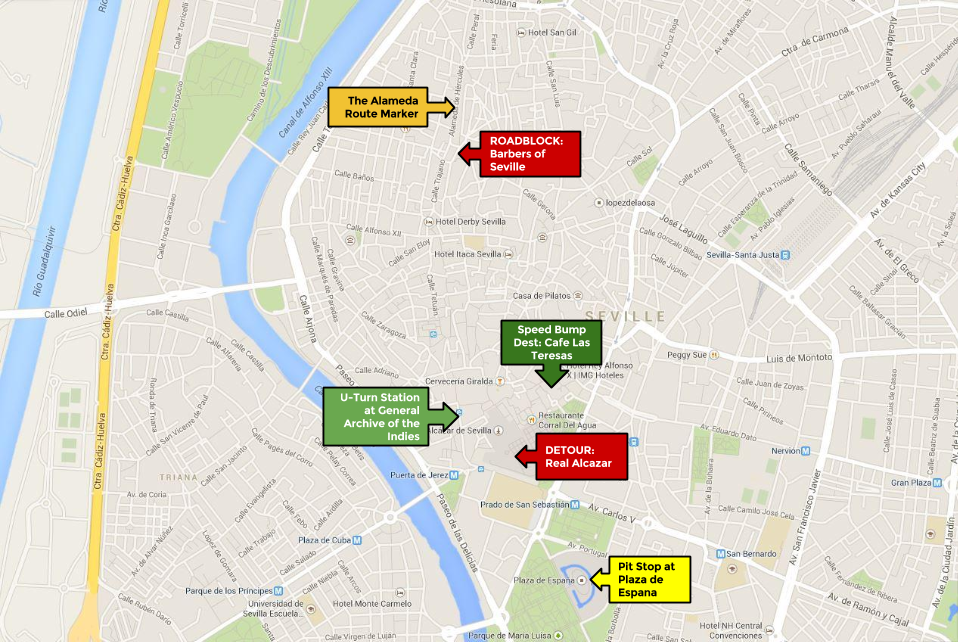 The city of Seville proved to be a great place for a leg of The Amazing Race as the challenges were pretty fun to watch.  We first had that equalizer at the Alameda, although the first group (Dave & Connor, Leo & Jamal) who got the direct flight still had about an hour or so (it seemed) ahead of the second group. 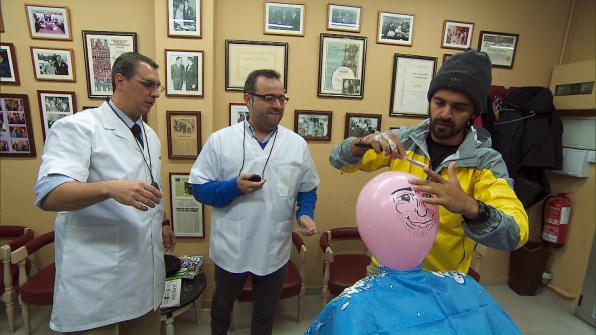 So I wonder, is that a real training tool for barbers?  It has to be, right?  There’s no way the Amazing Race just constructed that for this.  It was interesting to watch how the racers eventually realized you just had to go for it with scraping off the shaving cream if you were going to make time; what made me laugh is the nerves from the fact you knew the balloon would pop at the end.  But this pressure was nothing considering the Detour coming up…..

The Funniest Detour Action Shots Ever

I can’t lie – I couldn’t stop laughing at how violently the teams were getting beat up in the Running of the Balls Detour option.  It was hilarious to see how they’d get pummeled by the “bulls” and end up literally upside down from the impact or thrown against the walls and the floor.  Rachel’s mini-breakdown with her thinking she needed a bit of a reprieve because she wasn’t a boy was almost sad, but still, my sense of schadenfreude couldn’t be ignored.

So yeah, the challenge of surviving the three gauntlets in the bull option mixed with having to keep an eagle eye out for the placards made this a great challenge.  I think it was far more physically demanding than the Spanish Steps flamenco one, but obviously if you have no rhythm, you’re going to have to overcome that to work with mastering the moves.

It seemed a lot of what went down also is owed to Detour repercussions, as Jamal went down hard once and fucked his knee up, leading the Afghanimals to reconsider who they could actually beat, especially in a wounded state.  Their assertion is that the Cowboys can’t be beat, especially if Jamal is wounded, but Brenchel can be.  I’m not sure he’s correct.  Brenchel are amazing at this game, even if socially incompetent.  So Leo & Jamal get to the Double U-Turn and instead of U-Turning Brenchel….they take out the Cowboys.  A surprising move!

Speed Bumps and Other Irrelevant Things

Rocky Road to the Pit Stop 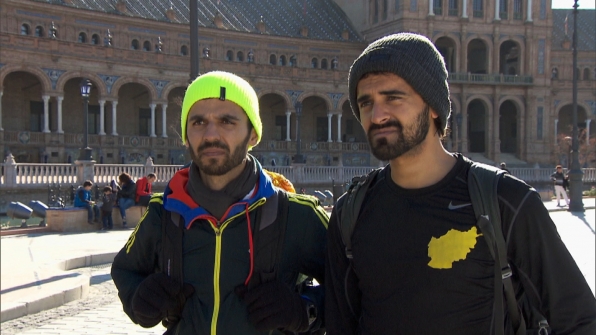 Two teams ended up a bit banged up by the end of this leg.  We’ve got Leo & Jamal, with Jamal having a bum knee.  If that doesn’t get better, I really don’t see them making it to the final 3.  Then Rachel wiped out while running to the Pit Stop.  She didn’t seem seriously injured, but who knows?  They probably wouldn’t have shown it if it didn’t have some impact.  Although, they may have shown it just to show Rachel wiping out.  🙂

The Cowboys get eliminated and amazingly, the Country Girls are still in this.  Who woulda figured?  With the teams as they are now, I think the race is an even toss between Dave & Connor and Brenchel;  The Afghanimals are likely gimped from this leg and let’s be honest, the Country Girls are lucky, but not THAT lucky. 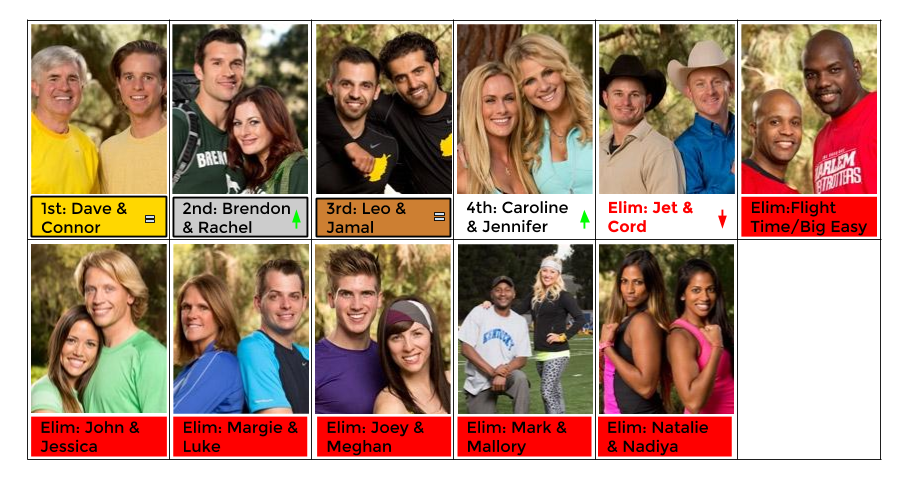 Overall Standings of the Race 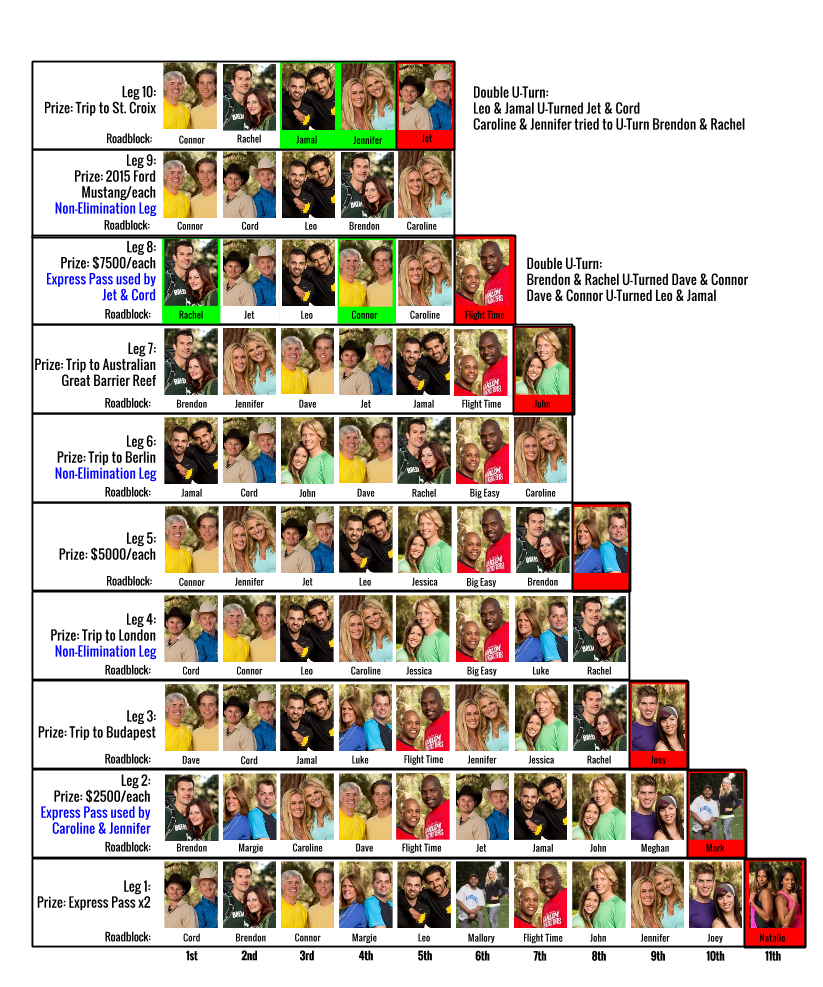