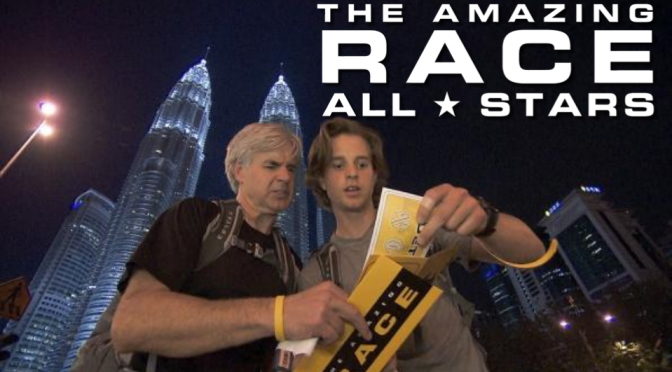 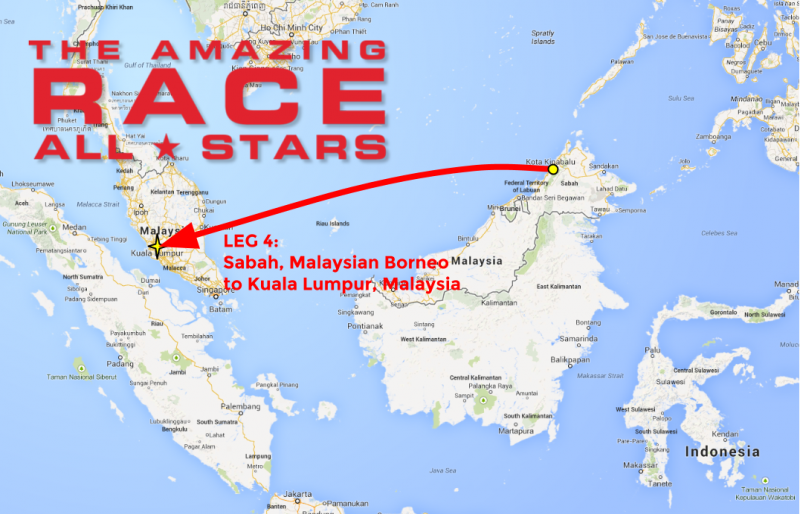 I’ve had one Shiner Bock this evening so I’m not sure I feel the super motivation this time to get ALL IN TO IT for this leg, as really not all that much happened, especially since it was finally a Non-Elimination Leg.  But I can’t deny that there was plenty to be entertained by! 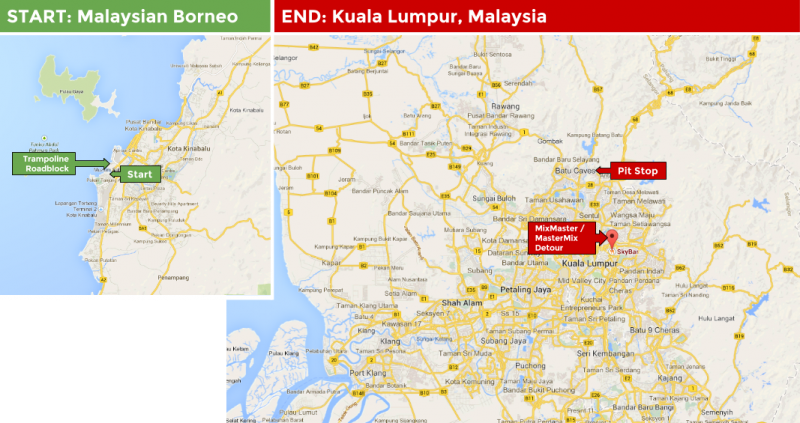 Both the Detour and the Roadblock were challenging in their own ways, with some of the teams taking to the particular challenge better than others.  Let’s look at that Roadblock in Malaysian Borneo first!

This looked deceptively trivial – bounce on a bamboo trampoline being rocked by a tribe of Malaysians and at the right moment, leap straight up from the trampoline to grab a flag that’s been set to a height proportional to the leaper’s height.  The only problem was that if you didn’t take advantage of the rhythm of the tribe, your leap was going to be woefully inadequate. 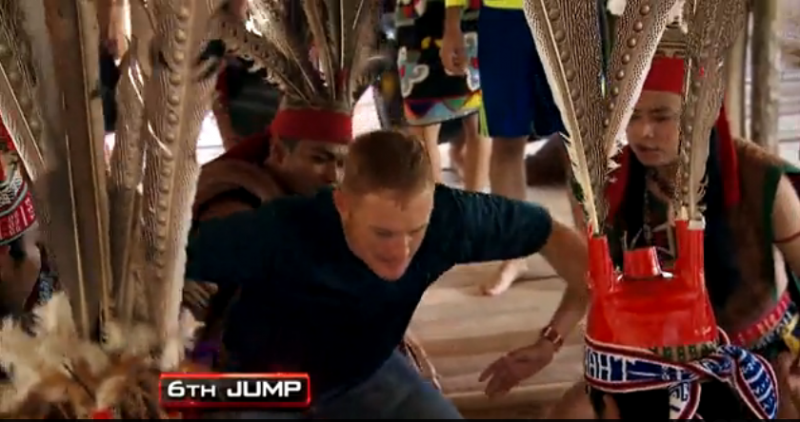 Jet & Cord had a brief lead at this point, but Cord was one who could just not find that special ability within himself to hit the rhythm right.  Dave & Connor and the Afghanimals passed Cord up.  Fortunately for the Cowboys, Cord did finally get it (after 47 – FORTY-SEVEN – tries; how far ahead WAS this team??) and was ridiculously sweaty for all that effort.  It’s a shame they seem to be so modest as it would have been completely fine with me if Cord needed to take his shirt off or something.  He was looking hot this episode, in all the right ways.

Side Note:  In another gay moment from the show (not that Cord’s moment was gay, but my thoughts about it certainly are), it was wonderfully sweet to see that moment between Margie & Luke when they talked about Luke’s coming-out and Margie totally knowing about it and it not being a big deal.  Loved that and I really liked them a whole lot more, which is why I thought for sure they were going home tonight due to the previews for this with Luke’s meltdown (more on that in a bit!). 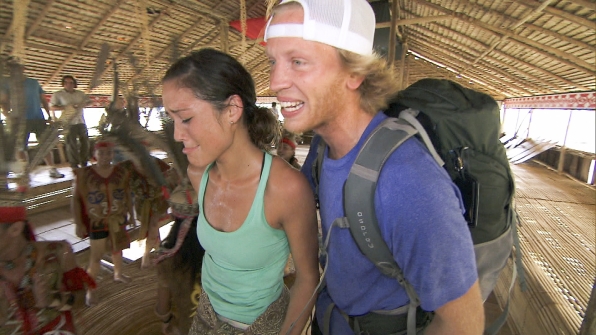 In other bamboline news, Jessica had to tough it out as she ended up shredding her bare feet on the trampoline, having to wrap them up and push through the pain in order to make the leap.  It was cathartic to see her make it on what looked like the next jump after having to tend to her feet.  Rachel also had some fun of her own when the pantyhose (!) she was wearing kept making her slip on the trampoline and falling on her ass every time she meant to leap.  When she took those off, she handily got the flag, but it did just ensure that they were last at the Roadblock.

So in another pre-arranged flight situation, the first 3 to arrive at the airport got on the first flight to Kuala Lumpur, the next 2 would be on a flight 45 minutes later, and the last 3 on a flight 45 minutes after that.  Of course, the flight gods being what they are, the 2nd flight ended up getting delayed by 50 minutes, meaning the 2nd flight became the 3rd flight trailing by 5 minutes.  Good times!

This looked at the beginning like it would be a fun Detour to do – but once we saw that the first group that arrived took an immensely long amount of time to make any progress, it was clear that this Detour was anything but easy.

Personally, I think I would have loved to do the Mix Master DJ option – I was super skilled at the game DJ Hero and this Detour looked like it required that exact same amount of dexterity to keep the beat.  Once the teams got into the groove I think it became a much easier to task to take on.

Not surprisingly, pouring a series of 7 drinks at once without mixing the yellow and red liquids was challenging.  You know, we’ve seen this trick done a few times while on the Celebrity Equinox (both trips) and the bartenders make it look easy.  HA!  I was impressed that the Cowboys were the first to finish, followed closely by Dave & Connor.  It was just when Margie & Luke and Brenchel were having their mini-breakdowns when things got real.  Luke flipped his shit as he realized that they were about to go home yet again due to a beverage challenge;  Brendon also lost his cool as his frustration at this ridiculous challenge couldn’t be contained. The common thread that both of these teams used to overcome?  RACHEL.  Unreal.  I’m still in shock that I’m typing these words, but Rachel managed to not only give a pep-talk to Luke (which worked on Luke as well as Margie, now that Luke wasn’t throwing any more tantrums) but also was able to keep Brendon focused.  I’m very impressed at Rachel’s maturity in the face of certain elimination.  Shocked, really.  I was screaming at Luke when he threw a fit along with the stack of tumblers onto the floor and I felt such respect for Margie in that she didn’t slap the shit out of him.

In the end though, Margie managed to pour the drinks for her team (the DJ option was never an option for them, so they HAD to do this one), while Brenchel was left alone.  Why they didn’t jump to the DJ option is beyond me, but finally, Brendon managed to pour his drinks successfully too….getting to Phil finally….and while they were last…..it was a non-elimination!   Yay!  I’m not ready to say goodbye to my Rachel just yet.  And Brendon hasn’t had the opportunity to remove his shirt and that is a damn shame.  A DAMN shame. 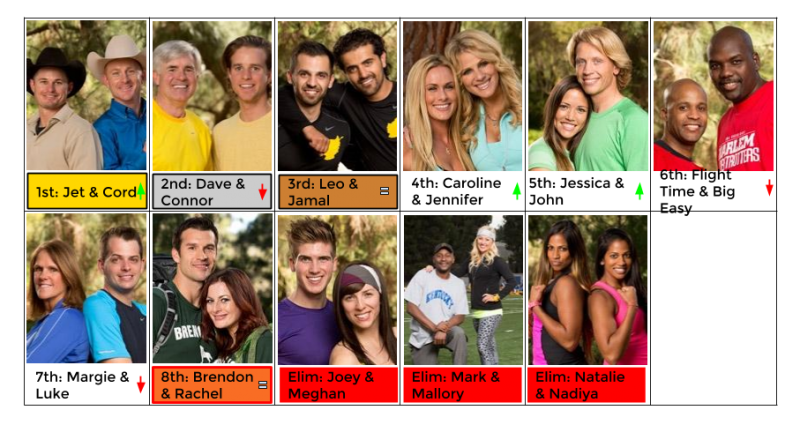 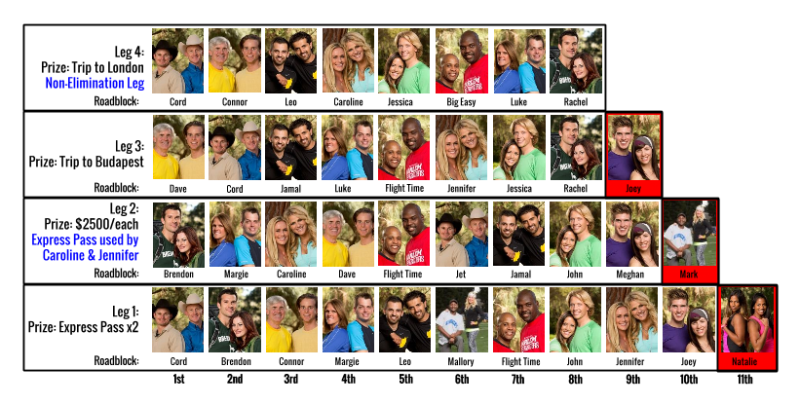