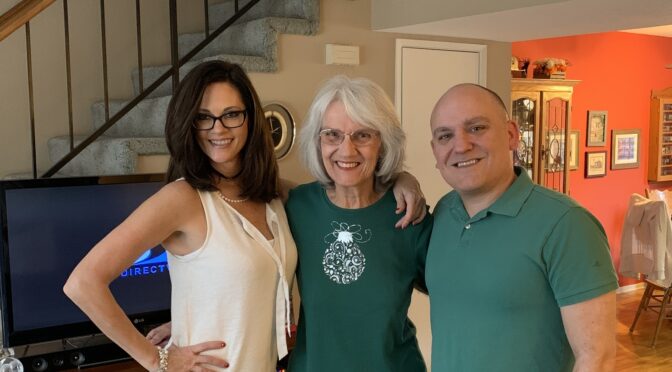 My mom died on Sunday, February 7.  It has been two years of watching this wonderful strong woman decline and succumb to dementia and years worth of health struggles.   My heart has broken many times this past year starting with Larry’s death, but being able to do really nothing except keep her comfortable this past year has killed a part of me that will never come back.  She was never the same woman she was after the surgery she had in January 2019, in which something triggered and broke something inside her.  I not only had to watch as my husband struggled and fought to live in 2019, I was there while my mom seemingly forgot how to do that.

She isn’t summed up by what she became these last two years, and I won’t let that be what colors my love and memories of her.  Just like Larry, I won’t let what their end was be all that defines them for me.   She was my mom, someone who I loved and someone who will forever be that person that was always in my corner and loved me and supported me.   She was that woman who when I came out to her in my late 20s immediately embraced me and let me know nothing had changed.  She only ever wanted what was best for me and did everything she could to help make that happen.   I tried to return that love and care in the later years, after Harv died, and I hope I was able to.

I know that after Harv’s death, it was not the same for her.   The love of her life had gone, and now it was up to her to rebuild something new.  At 65, that isn’t the easiest thing to do.   But she did, and she joined Silver Sneakers at the YMCA and made some friends.  I was so proud of her to not only get out there and exercise, but to be social and just find something new.

Growing up, she was such an instrumental force in me becoming who I am.   Her hobbies became mine:  reading, watching musicals (Cabaret!  Sound of Music!) and sappy movies (Somewhere in Time! International Velvet!), music, drawing, studies…. These were all formative things that still drive me and provide me some kind of comfort.  And she provided this for me while going through a divorce, moving us out back to Southern California, staying with family to get back on her feet, and doing everything she could to make sure we’d be okay.  She ended up meeting Harv and they fell in love, and eventually they married and I had a stepdad and step-siblings and more.   I now had a ‘staircase’-sister, Stacie, who became just sister over the last 35+ years.  Mom and Harv built a life, found their own successes and were able to build a home together in Monrovia, where I got to grow up and thrive with friends I still have to this day from MHS.   They ended up able to finally buy a home in Duarte, which just 10 years before would have seemed impossible.

Mom had a hard childhood but managed to fight for a bright adulthood.  Full of ups and downs, it was a good life for many years.   I hate that her body and mind betrayed her in the end, and that these last two years are what happened to her.   I’d say it’s not fair, and I mean that, but I also know the concept of fairness is stupid to apply here.   But I have a lot of anger and sadness at the way this all happened at once, and I’ll have to learn to let go of that over time.  I’ve lost my husband and mom in the course of a year, and I can’t help but feel sadness, anger, occasional despair and enormous resentment at what life has turned into lately.

Those feelings are for another post, but they’re part of this.  Just not the only part.   I loved my mom, I know she loved me, and I miss her so fucking terribly.  I’ve missed her for two years to be honest, but knowing it’s final just hurts in a different way.  I can only hope she’s reunited with Harv in some way and maybe even is able to send my love to Larry.

I know where she wanted to be laid to rest and that will come in the next few months.  I’m not sure what I’m doing about a memorial just yet as this COVID nightmare makes things a whole lot more challenging.

I love you, Mom, and I hope you’re finally at peace.   Of anyone, you deserve so much of that.

One thought on “Rest in Peace, Mom”