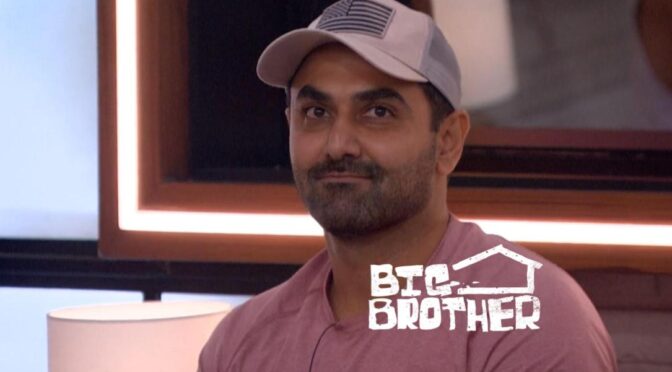 Man, I love the hell out of these two.  Their awesomeness is not unnoticed by everyone else in the house though as they easily become two juicy targets to take out, especially as the house starts shaking out along battle lines.   There’s Cody and Nicole F (who strangely are allies now?), along with potentially Tyler and Memphis?   Then there’s Kaysar and Janelle, and then everyone else – those others aren’t floaters but it’s just too damn early to say yet.

Anyway, Cody’s plan this week?   Nominate Kaysar and Janelle.  Shocker.   It sucks for my enjoyment as I love these two, and it seems like there’s going to be another new-school vs old-school showdown brewing like what happened on Survivor this past season.   It would be great if old-school gets the upper hand this time, but we’ll have to see if that plays out.

Well, just as Cody thinks his week won’t be too stressful, we learn about the “Safety Suite.”  Everyone is given VIP Passes to BB’s hottest club:  Safety Suite.   Over the next 3 weeks, the Safety Suite will be open for one hour each week – you can decide to scan your pass at the door and you enter yourself in to compete for that week’s competition.  The prize?  Safety for the week.  Also, you get to take a “+1” and that person also gets safety.   It’s like this twist was specifically made to help keep Super Targets safe!?  The downside?   You can only use this pass once, and if you lose, you don’t get to try again later.  Oh, and the “+1” gets a punishment.

So, the Safety Suite opens up for the week and absolutely everyone is terrified of making the move to swipe in.  It does indicate you feel you’re not safe and you’re willing to do something about it….which YEAH.  That’s exactly the point of this whole thing.  Don’t put your fate in someone else’s hands.   Both Kaysar and Janelle saw right through Cody’s noncommittal blahblahblah to them when they individually talked to him and could tell they were in trouble.   But neither of them move to go swipe in.   It’s not until literally 30 seconds are left when Kaysar gets up, goes upstairs, and swipes in at literally the last second.   Janelle is right there with him and swipes in too.

Thoughts:  where the hell was anybody else from Cody’s “side” of the house to mitigate this quite obvious possibility?  Like, was no one thinking about the fact that if just Kaysar and Janelle compete, unless they both absolutely fuck up in the comp, which hello, both of them are comp beasts, that means they’ll both be safe?   Where was Nicole F or Tyler or Memphis shadowing them and being the spoiler???  I’m glad they didn’t, but I’m still staggered at this non-play by that side.   Also, some have speculated why did Janelle even bother playing at all if it was likely that she would be Kaysar’s “+1”?  I think her concern is that if Kaysar lost, she’d be fucked.  It seems there was a time limit to the comp and a time out was entirely possible.  So it was best to just hedge bets and stay in the game rather than pray Kaysar didn’t lose. 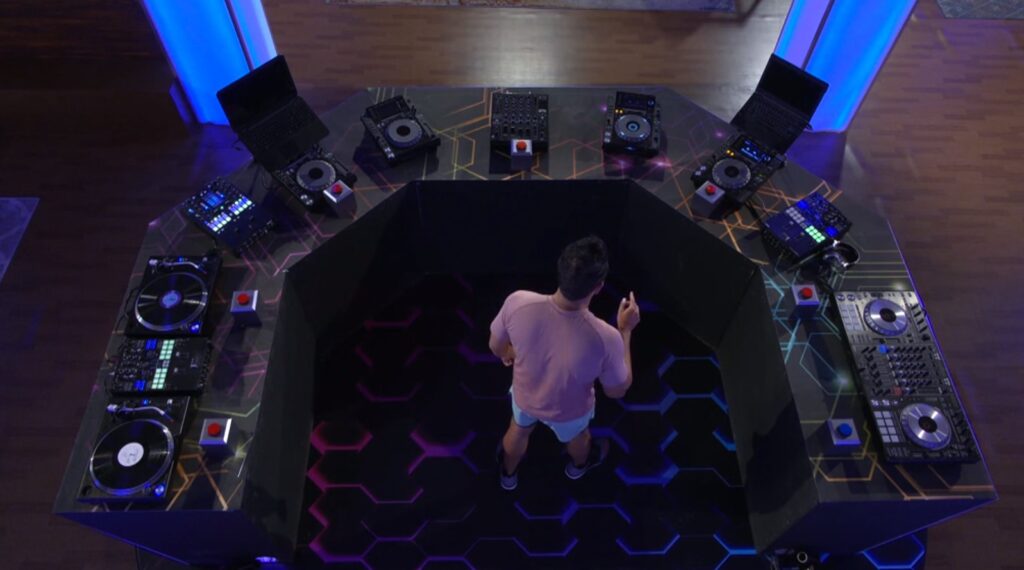 In an enormous lounge area somewhere on the studio stage, BB built up a big DJ booth for the competition.   The goal was to be the fastest to recreate the “Twinkle, Twinkle” remix by pressing the right buttons that contained the various pieces of music found in the remix.  Kaysar went first, followed by this Confident Queen: 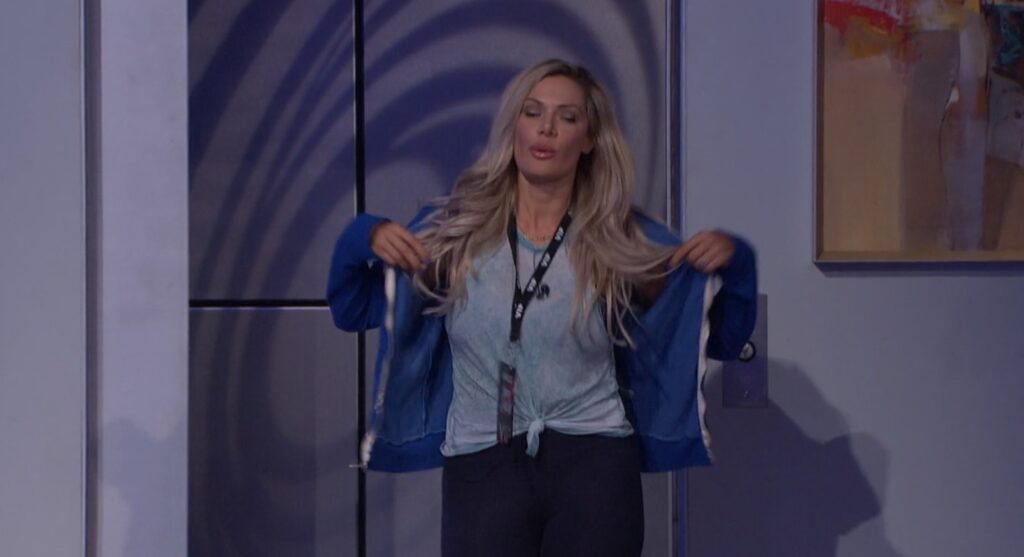 Janelle’s swagger knows no bounds.  The animated GIF of her entering and throwing her jacket on the chair is just…chef’s kiss.

Anyway, neither timed out, and our winner? 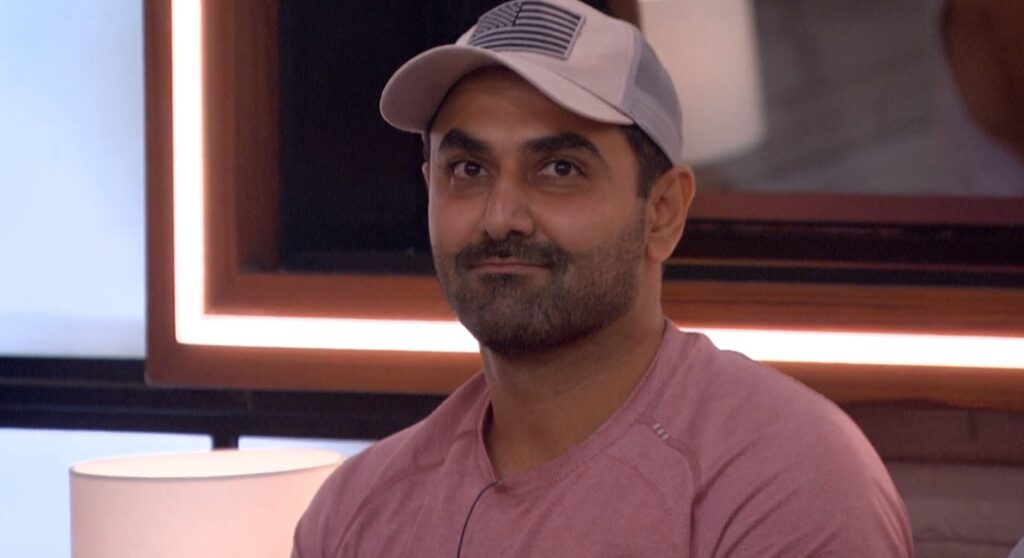 Sexy Kaysar himself knocked it out of the park and shocker of all shockers, gave Janelle his “+1”. 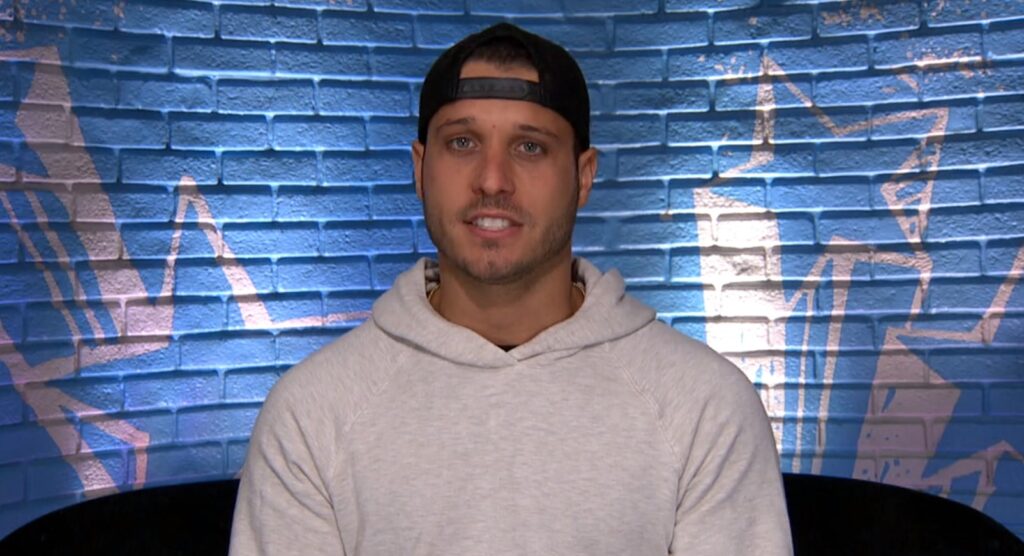 This is Cody realizing that shit, there goes Plan A.  He really isn’t that bright without Derrick.   Hot as hell still, but a strategic genius he is not.  The non-offensive target strategy becomes Plan B, and for some reason the target lands on perceived floaters Keesha and Kevin.  At this point, I struggle to understand why you’d keep Nicole or Ian around as prior winners.  The main argument to keep them is odds are the jury won’t award a previous winner twice.  But tell that to Sandra Diaz-Twine of Survivor.  You don’t want them to get too close to the end as that IS an accomplishment unto itself.  I know that there’s stronger relationships in the house than have been shown on the show, but still.  There’s Enzo and David right there too.  Like, will Enzo grease his way to the end yet again?   The chill creepy brother type that is funny enough and charming enough to never seem like a target?   I almost want to bet money he’ll make Final 4 once again.

Anyway, Cody nominates Kevin (who had been just weeping into Cody’s arms earlier, which…awkward) and Keesha (who realizes she may need to start playing the game! Yes, Keesha, that’s a GREAT idea).   I think there’s a chance for this first week to be a backdoor eviction still as this is All Stars, and there are plenty of juicy targets around worth way more than a Kevin or Keesha currently are.  But we’ll see. 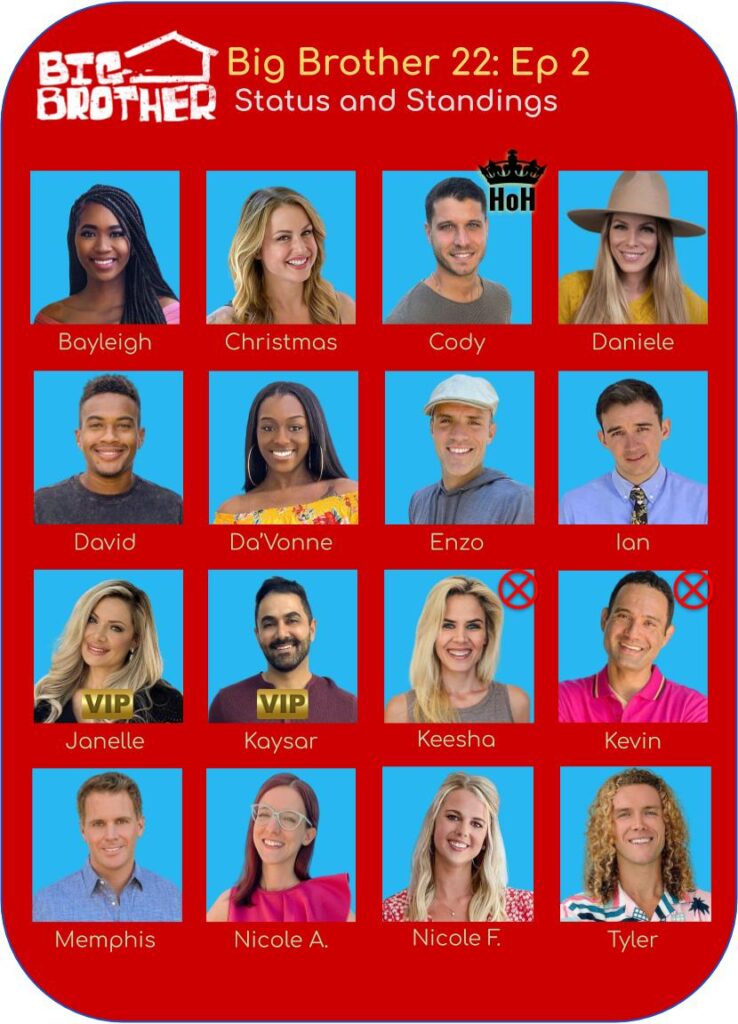 Maybe for tomorrow’s show I’ll align the pictures to indicate relationships?   It’s alphabetical now, and I think the eviction vote will let us know things are gonna play out.

OMG, I forgot about the best thing ever.   Britney of “HEY RAGAN, YOU WANT SOME COOKIES?” fame is recapping the show using paper dolls and why can’t she be doing this for everything?   Her DR sessions and sense of humor are so fucking great.

This is the recreation of the Premiere – her brutal takes are….perfect.

My recreation of the #bballstars premiere (Pt 1 because twitter won’t let me do the full vid at once) pic.twitter.com/5X2opwbYCZ

And here’s the recaps for Ep 2:

Including here pt 1 of recreations from last night during the show, featuring my backyard frog choir. Ugh white claw. pic.twitter.com/WwY0CfIgtG

Pt 2, your nomination ceremony and send off. Hope you enjoyed ? I maybe had too much fun w this. pic.twitter.com/n2SXHwgYBk